My home assembled, $258 short barreled pistol grip shotgun. If the shooter doesn’t like the pistol grip, he can switch the gun back to a full stock. (Photo: David LaPell)

In the last couple of months, the shotgun world has been taken by surprise with Mossberg’s introduction of the 590 Shockwave and on its heels Remington’s response with the 870 Tac-14. Both have redefined what a personal defense shotgun can be. They are both in 12 gauge, both have 14 inch barrels and both feature the same Shockwave Raptor pistol grip.

Short barreled shotguns themselves are nothing new. Coach guns and cut downs have been around since the horse was the only way to get to town. And these guns managed to hold on into the 1980s and 90s with the rare offerings like the Remington 870  Witness Protection — a weapon that found favor with the US Marshals. The issue has always been legality and, while I won’t go into all the details here, it seems that someone at Mossberg did their research. The result is a weapon that many gun owners could not have bought without a tax and in some states not at all.

While this is all great news, after looking at a 590 Shockwave, I began to wonder if I could not come up with an alternative that would be more cost effective and avoid any potential legal headaches among the states and localities. 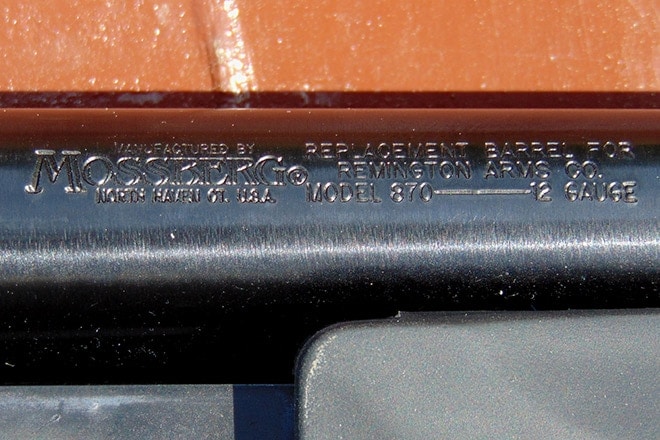 For those wanting to save money, Mossberg makes an aftermarket barrel for the Remington 870 that’s cheaper than that produced by Remington. (Photo: David LaPell)

The secret behind both the 590 Shockwave and the Remington 870 Tac-14 is that, even though they both have a 14-inch barrel, the Raptor grip, which is put on at the factory so the gun was never a true modified shotgun and instead a “firearm,” still has an overall length of 26 inches  (26 and a third according to both manufacturers). The problem is, if you don’t like the grip on either gun, too bad, you’re stuck with it. You cannot legally put on another pistol grip or a full length buttstock.

I decided against buying either of these two because of the tight budget that I am on. I didn’t want a gun I might not like shooting, only to end up turning around and reselling it because I couldn’t change it. So I decided to see if I could make a gun as handy and as useful as the 590 Shockwave or the Tac-14.

I began by searching the local gun shops and was not disappointed. I found a barely used Remington 870 Special Purpose in 12 gauge. It had a 23 inch fully rifled slug barrel with a black synthetic stock. The shop owner was having a hard time selling it, in part because of the barrel which limited it to big game hunters. I learned in the past that that those barrels can be resold —  someone always wants one — so I worked out a deal for the gun and got it for $290. 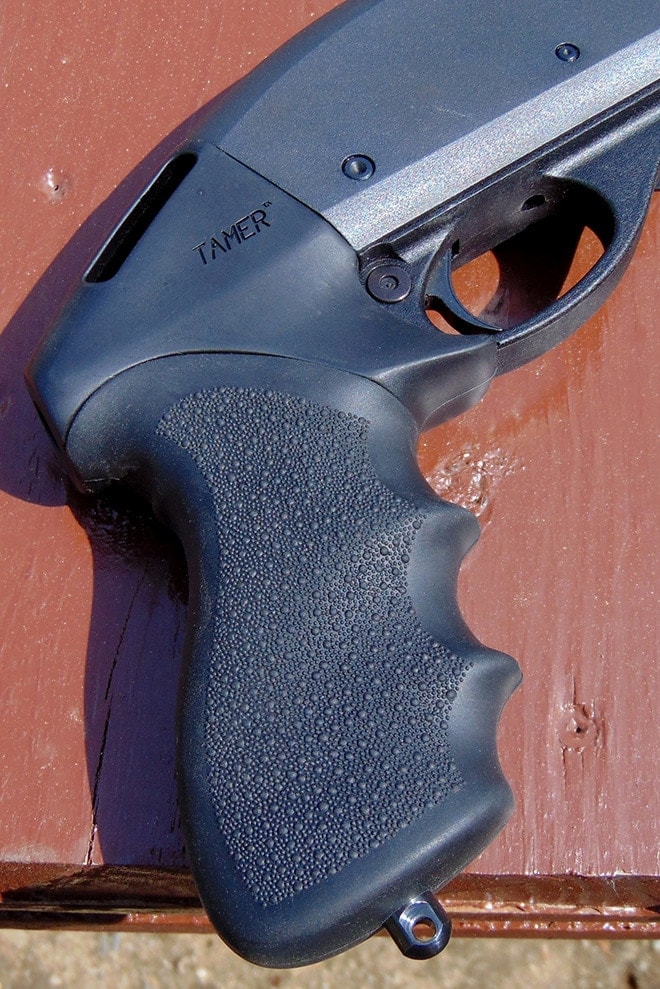 The Hogue Tamer grip soaks up a lot of recoil from stout loads like 00 buckshot. (Photo: David LaPell)

I set out buying parts but I knew I wasn’t going to buy a single thing until I had sold the barrel. After putting it online, it sold for $140. The original buttstock, with its Monte Carlo design, would be too tall for a simple bead, so it went along with the factory forearm, which would be too long for a side saddle. I got $25 for both. I found a new aftermarket barrel that is 18.5 inches long for $103. I also found a Hogue Tamer forearm and pistol grip set for $30. Once all the tallying was done and the parts swapping finished, I had a gun that I put a grand total of $258 into, about $150 less then either a new Tac-14 or 590 Shockwave.

Now you might be saying that standard pistol grip shotguns are uncomfortable, especially compared to the new Raptor grip. While that might be true to others, I find the Hogue Tamer grip is not that bad at all with recoil. I tested it by shooting some Remington 2.75 inch 00 buckshot and I found it was not painful or unpleasant. Now I might eventually get a Raptor grip later on but for now the Tamer grip is just fine. The Remington 870 with the 18.5 inch barrel and Hogue Tamer pistol grip ended up being 28.5 inches long, just a little more than two inches difference between it and the 590 Shockwave and Tac-14. 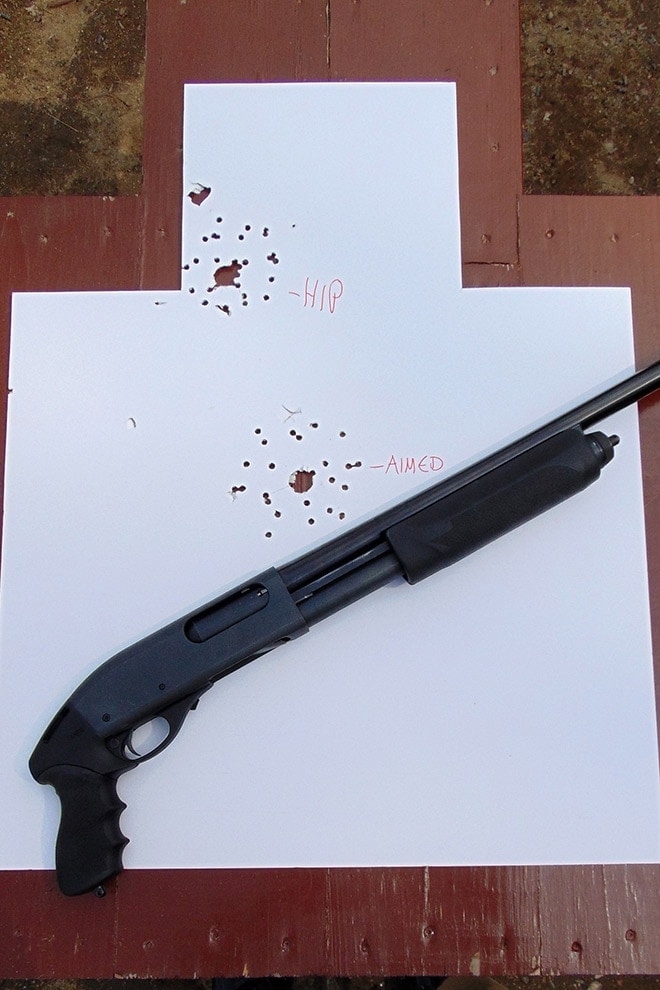 Shooting from the hip with a pistol grip shotgun is not as accurate as looking down the barrel and using the sight. (Photo: David LaPell)

Now the big issue with pistol grip shotguns is that few people understand how to really shoot them. Yes, they can be shot from the hip but it takes more practice to learn because you’re not actually aiming the gun and past a few yards it’s pretty much worthless. The proper way is to hold the gun out away from your face but still looking down the barrel. I took two shots at seven yards with my 870 after the modifications, one from the hip and the other aimed with some #4 buckshot. The hip shot was high and to the left, barely on target. The aimed shot was center mass and no, I didn’t lose any teeth. This is because the gun was held properly away from my face.

I imagine many people are asking why all the fuss over pistol grip shotguns in the first place. They do have their place: as a truck gun, for camping or home defense, but they do take practice and getting used to. I like them because a few years back I suffered an injury and I have a harder time using a full stock shotgun, so for me it’s a matter of practicality and convenience. If for some reason however I was ever going to put another buttstock on this gun, I could — something that’s not possible with the 590 Shockwave or the Tac-14. 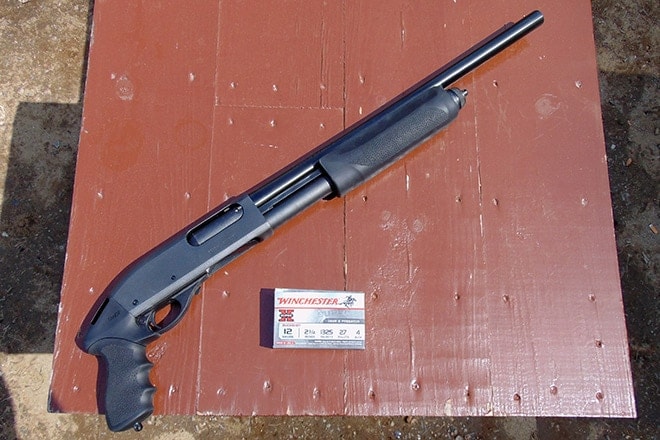 For those who don’t like buying used guns, I would suggest that since this is something you are not likely to shoot all day long at a range like you would a skeet gun, something like a Maverick 88 would suffice. Even after buying the pistol grip, I doubt you would be out more than $250 and again, you could put a buttstock back on if you so desired.

The Mossberg 590 Shockwave and the Remington 870 Tac-14 are both great ideas, but they are not the last word on the subject of short barreled shotguns. You can make your own legally with more options and for less money. No matter what choice you make, get out to the range and practice and learn how to shoot the gun. Find out its strengths and weaknesses. You’ll be surprised to find that these little pistol grip shotguns have more uses than you can shake a boomstick at.