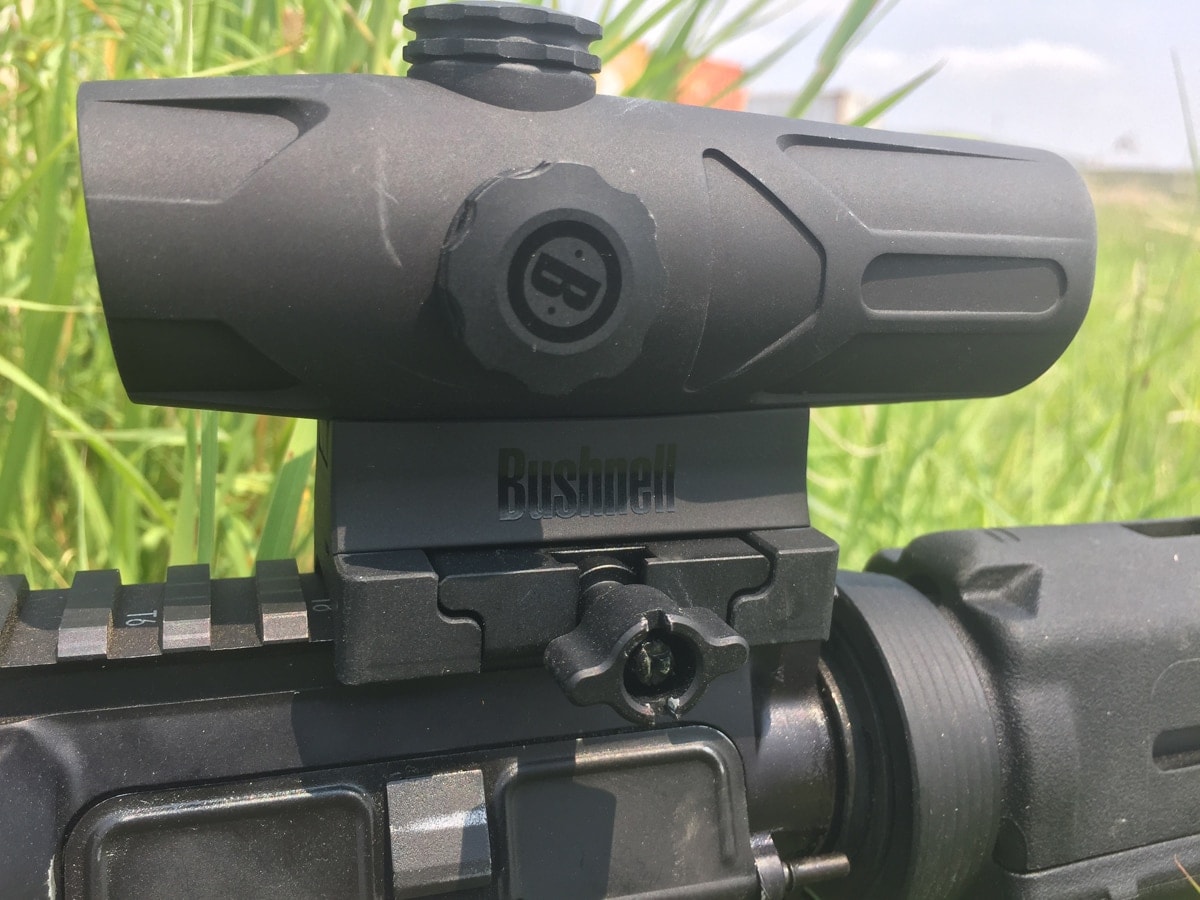 Left side view. The Enrage is a slim package for carry or in storage.(Photo: Team HB)

For the last several weeks, I’ve had the chance to test drive the quick-install Bushnell Enrage, the company’s updated red dot optic. The experience led me to change my view of a competitor’s popular optic.

This red dot optic is simple in more ways than one. It ships complete with a high mount, Allen wrench for tightening, and 2032 battery. That makes shopping, installation, and powering it up easy. Looking through the lens, the view is a simple 2 MOA red dot; nothing else. Simple, in this case, is good.

A streamlined shape makes this lightweight optic minimally bothersome to carry or store in a narrow location. The outside diameter is 1.75 inches, save for the small space occupied by the mounting nut which increases the width to 2.5 inches. There’s a viewable diameter of 1.25 inches. The unit is 4.75 inches long. The bore-reticle offset looks to my measurements to be 3.0 inches, but in practice the offset was around the 2.5-2.75-inch mark.

Bushnell says the Enrage is optimized for their relatively new MSR carbine. In this test, it was installed on a run-of-the-mill homebuilt AR-15, which already had a rail and iron sights. 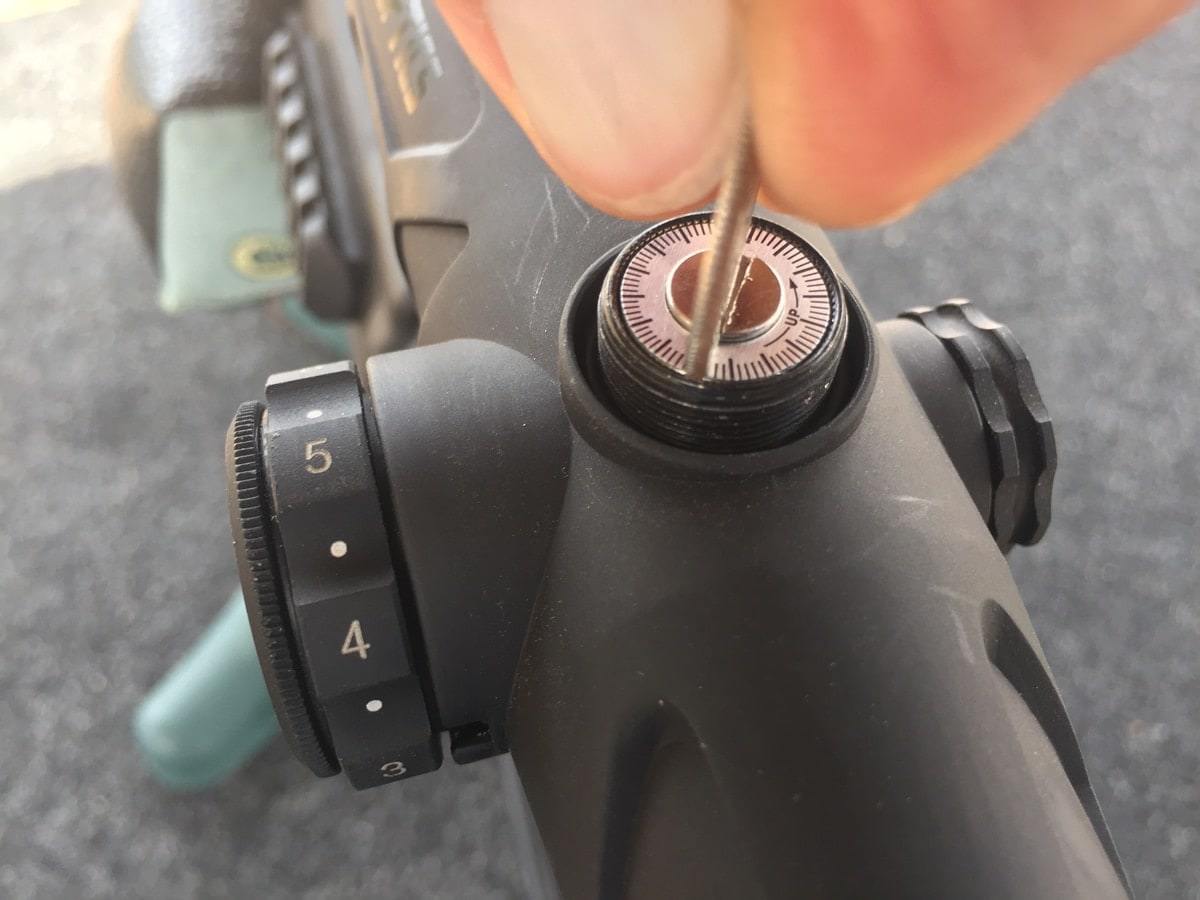 Elevation and windage adjust with a dime. (Photo: Team HB)

The Enrage requires a Picatinny rail for mounting. A single tightening screw is secured with a large plastic wing nut, the only part of this accessory I feel is a bit on the bulky side. Its size, however, allows for plenty of leverage and easy mounting. It’s literally possible to be shooting with this red dot within three minutes of opening the box.

This particular copy came out of the box requiring almost no windage adjustment. It was 45 MOA low. Adjusting the dot’s position is easy. Caps covering the turrets are octagonal, making gloved use possible. The turrets adjust in 1/2 MOA increments with a dime as the tool. Clicks are palpable, and mostly steady, though a bit squishy and less consistent in feel than the Aimpoint Micro used as the comparison product.

Adjusting the dot brightness is done with a dial on the left side. Brightness settings are clearly numbered. Between each setting is an “off” switch. That makes it very quick to turn on or off, a nice feature for practice sessions when a consistent setting is needed between breaks. This is another simple trait that minimizes time wasted scrolling up and down through brightness levels.

Bushnell says the Enrage’s battery power lasts longer than its other optics. After at least six hours of on/off use, the power shows no sign of dimming yet. It’s important to remember to turn the optic off, there is no auto-off feature. 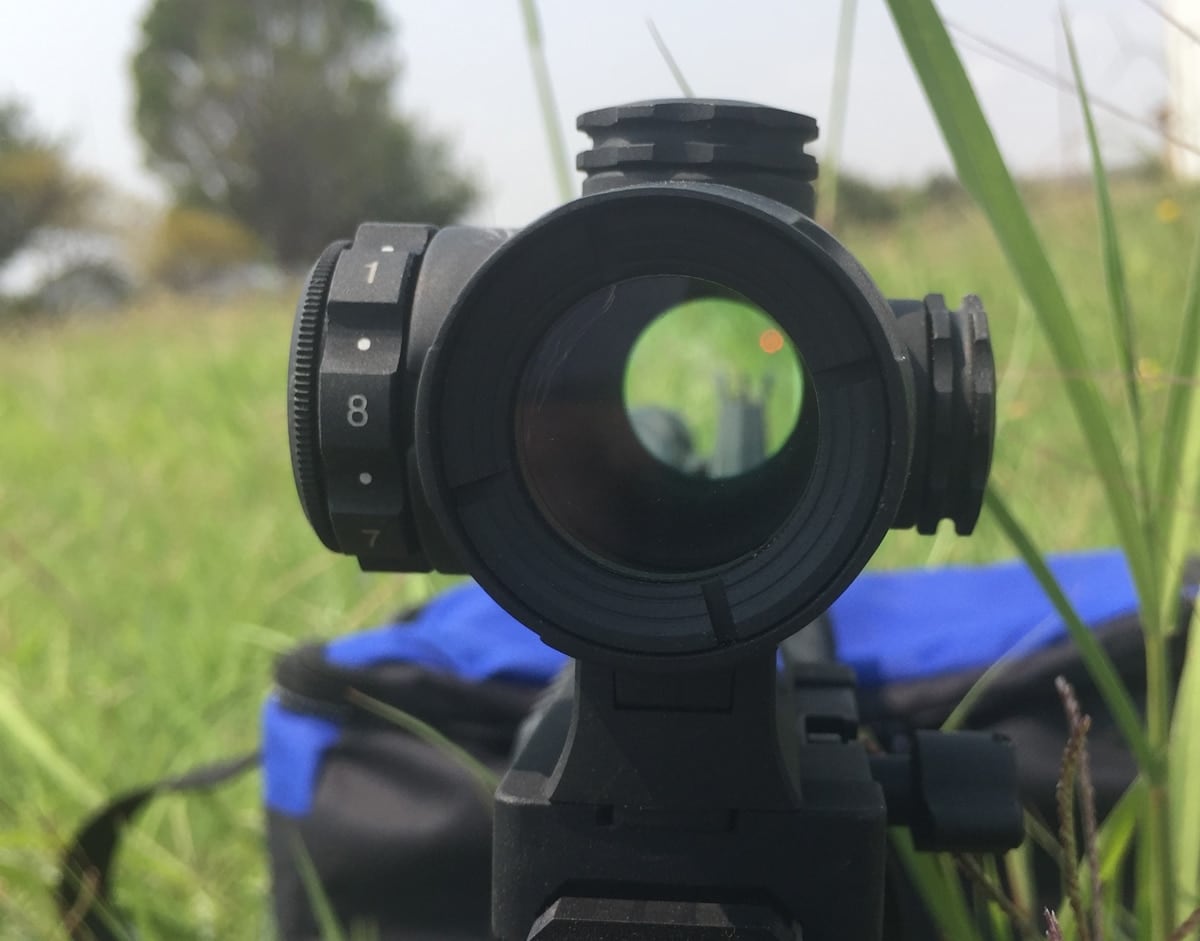 The actual view is much clearer than shown. Note the glove-ready elevation and windage dial covers. (Photo: Team HB)

A student and I both used the optic, firing an AR-15 at distances from 15 to 200 yards. Lower brightness settings proved very useful for ringing steel at distance. On medium brightness, quick target acquisition at shorter distances, from an off-hand position, was easy.

We did encounter some inconsistency when confirming zero at distance, after about an hour of use. A seemingly perfect zero would be set, only to be a total miss on the next round. Recognizing the sign of a loose mount, it was soon confirmed that the mounting screws between the mount and optic itself had loosened. These had not been touched since unboxing.  A little tightening, and the optic stayed on point for an all-day class and continued to perform well after an overnight rest.

Co-witnessing with flip-up iron sights was a breeze. The optic put the sights neatly in the lower third of the viewer, the irons fully visible but not interfering with the dot.

Running the Enrage beside a much more costly Aimpoint Micro on a LaRue Tactical mount, some interesting outcomes were noted. The Aimpoint shooter spent more time adjusting his optic after breaks, having dimmed it all the way to the off setting. When shooting at distance from a bench or prone, adjusting the Enrage’s brightness was a smoother process due to the location of the dial on the left side. The Enrage shooter was able to maintain a cheek weld and kept the target in sight while adjusting. 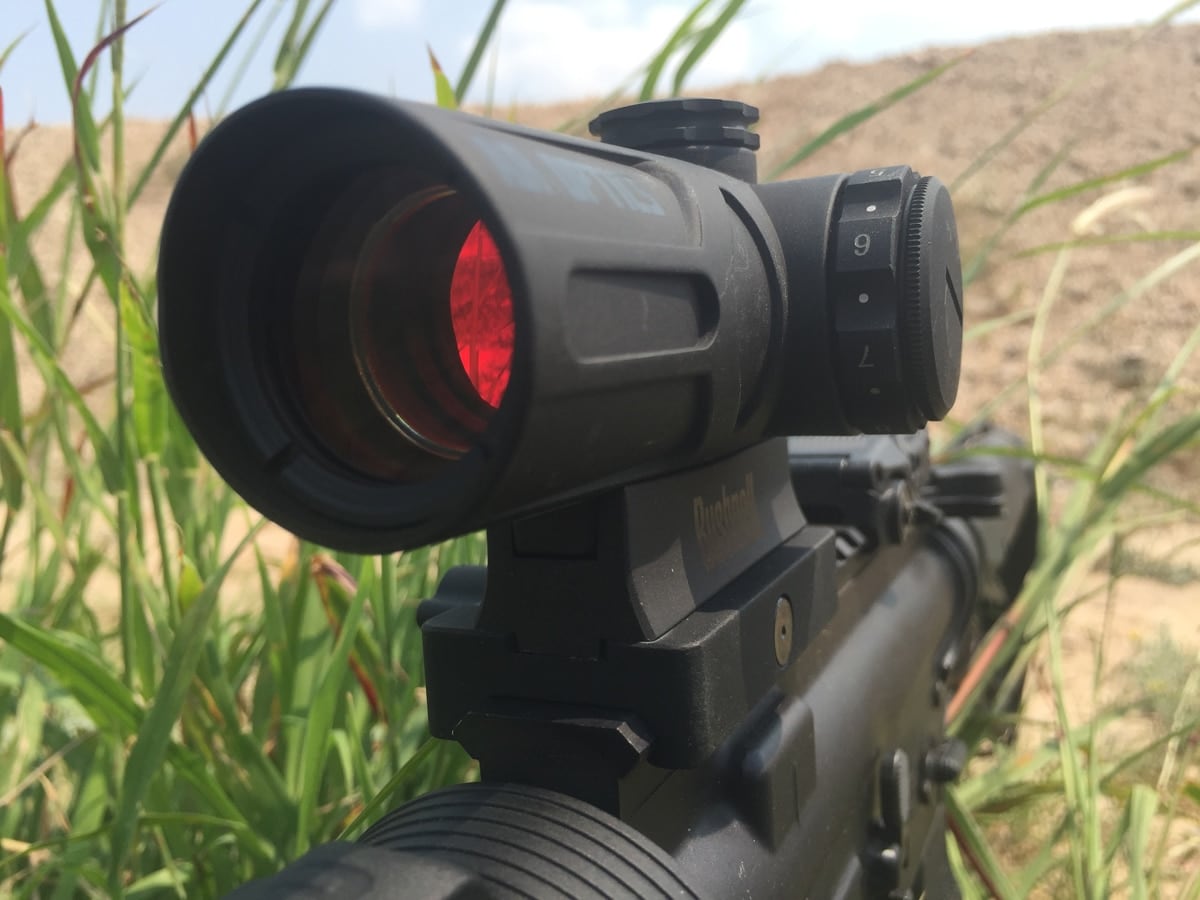 The Aimpoint shooter had to break his firing grip, which resulted in a lot of head-raising, in order to adjust that optic’s right-hand located dial. Turns out, the Aimpoint is one of the few products anywhere made with a southpaw bias. And likewise, the Enrage seems to be more conducive to easy adjustment by the majority of shooters who operate the trigger with the right hand. This was a most unexpected discovery.

This test was done in humid summer conditions, so fogging up due to cold temperatures wasn’t a possibility and remains an aspect of performance untested by our team. However, in every other way, the Enrage continues to prove itself an excellent choice for a reliable optic.

With a retail prices ranging from $118 to $216, including mount and battery, the Enrage represents great quality for a budget price. Whether it’s as durable as setups costing almost five times as much remains to be seen. I’m bullish on this one and would recommend it to anyone looking for their first non-magnifying red dot.