Can birdshot ever be used in a home defense shotgun? 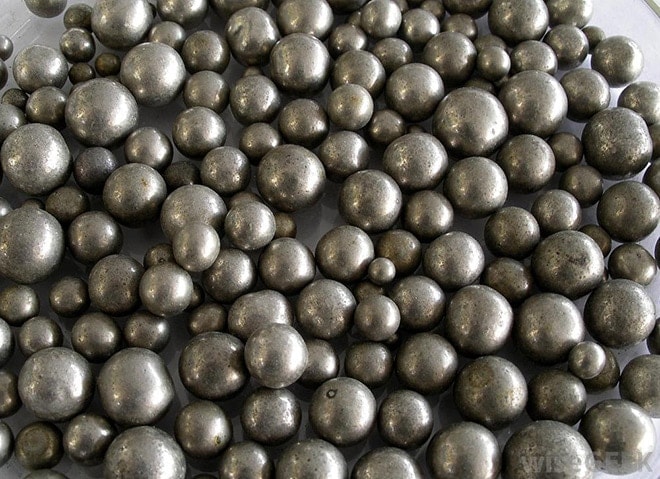 Birdshot refers to some of the smallest shotgun pellets and is often considered inadequate for defense purposes. Playing around with loads did however reveal some surprises.

A well worn topic of debate among firearms enthusiasts is the effectiveness of birdshot for close range personal defense applications. One side will assert that birdshot is for little birds while the other counters that at close range birdshot will create a grievous wound without buckshot’s potential for over-penetration. Curiously, I have found that most of these debates focus the comparison between 00 buckshot loads and light birdshot loads commonly used for hunting dove and quail.

There are many of sizes of birdshot between #9 and BBB and some manufacturers even market shotguns loads stuffed with mid-sized shot for personal defense. (For the purpose of this article, I consider “mid-sized shot” to be any size larger than #2 birdshot and smaller than size 4 buckshot.)  I obtained a sample of such ammo and put it to the test both in terms of terminal performance (gelatin blocks) and pattern.

The firearm used in all tests was a 12 gauge Benelli Nova with an 18 inch barrel and a fixed improved cylinder choke.

In the interest of establishing a base line, I first fired a round of Sellier & Bellot 00 buck into a gel block. Nine pellet, 00 buck loads have long been considered the gold standard for defensive shotgun rounds, so I thought it would be both interesting and useful to see how its performance compared to that of the other rounds. The advertised muzzle velocity of the load is 1180 f/s.

The photo above shows the cavity in gel created by the Sellier and Bellot 00 buck load. The entry point is at the right of the frame. (Photo: Jason Wimbiscus)

As expected, all of the pellets passed completely through the first gel block and most penetrated 2.5 inches into the second block. A solitary pellet reached a 4 inch penetration depth in the second block. The maximum width of the cavity was approximately 3.5 inches. The maximum diameter of the pattern was 10 inches at 30 feet with six of the nine pellets staying within the 9-ring of the silhouette target. 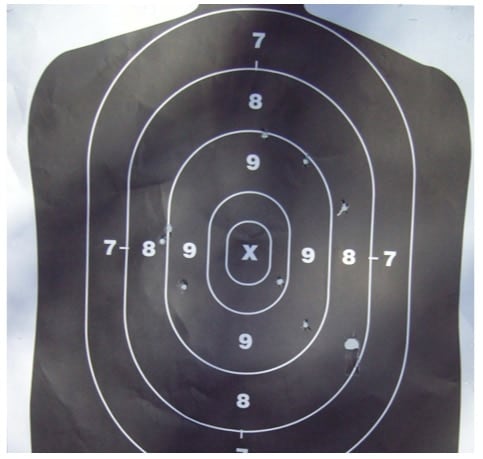 The 00 buck pattern at 30 feet. Two thirds of the payload stayed within the 9-ring.

This is a load I often use while hunting ruffed grouse in the thick brush of northern New England. While numerous tests have been conducted to test the defensive potential of upland game rounds like the Remington Express, I couldn’t resist conducting a test of my own. 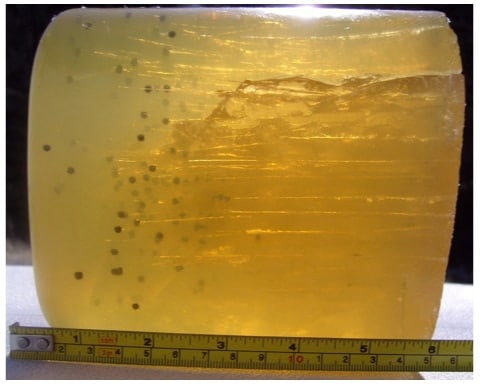 The photo above shows the cavity created by the size 7.5 shot. A bulk of the payload came to a rest 4.5 inches into the block. The entry point is at the right of the frame. (Photo: Jason Wimbiscus)

Some of the pellets barely exited the six inch gel block, but a majority stopped at 4.5 inches. Maximum cavity width was approximately four inches. At 30 feet, the pattern essentially filled the 14 inch by 22 inch piece of paper I was using as a target. 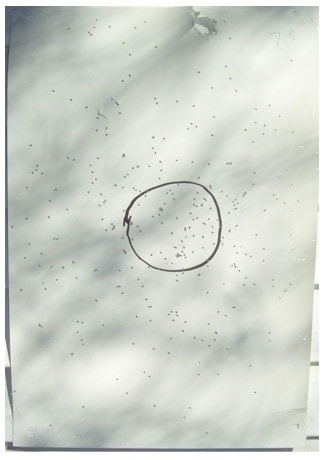 The pattern made by the size 7.5 Remington Express round at 30 feet. The pattern represents one shot through an improved cylinder choke. (Photo: Jason Wimbiscus)

This load is one of two rounds currently marketed by Remington for home defense applications that contain shot smaller than size 4 buck. The other product marketed under the “Ultimate Home Defense” moniker contains a blend of size 2 and size 4 birdshot. 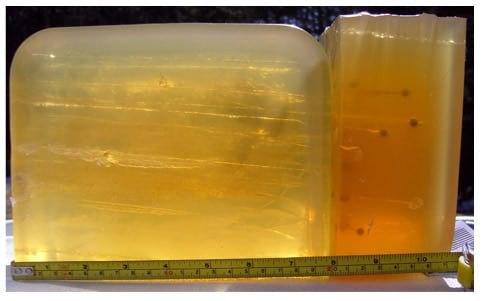 A cross section of the cavity created by the Size BB shot. The entry point is at the left of the frame. (Photo: Jason Wimbiscus)

The round used for my test contained 1.25 ounce of size BB (.18” diameter) tungsten/bronze/iron pellets at an advertised muzzle velocity of 1250 f/s. According to literature on the box, the round is engineered to provide tight patterns from short barreled guns.

All pellets that struck the test setup exited the first block and a maximum of three inches into the second block. The maximum width of the cavity within the gel was four inches. The pattern at 30 feet was 18 inches at its maximum, and a total of 29 pellets wound up inside the 9-ring. Pellets recovered from the block showed no deformation. 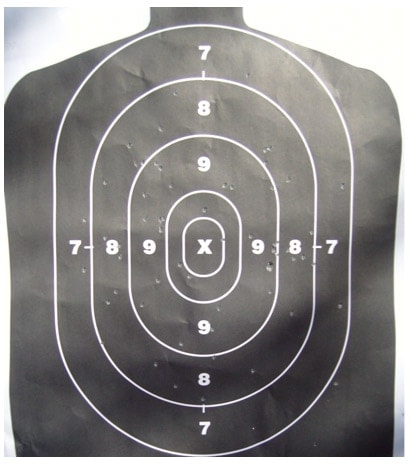 The pattern created by the Remington “Ultimate Home Defense” round at 30 feet. The improved cylinder choke clustered a good number of pellets toward the center of the target. (Photo: Jason Wimbiscus) 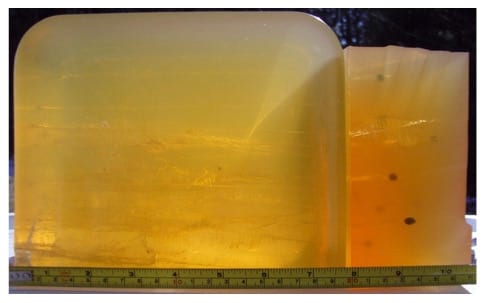 The cavity created by the size T shot. The entry point is at the left of the frame. (Photo: Jason Wimbiscus)

All pellets completely penetrated all 8 inches of the first block and then 1 to 1.5 inches into the second block. Maximum cavity width was approximately 6 inches. The maximum diameter of the pattern at 30 feet was 16 inches with 19 pellets ending up in the 9-ring. 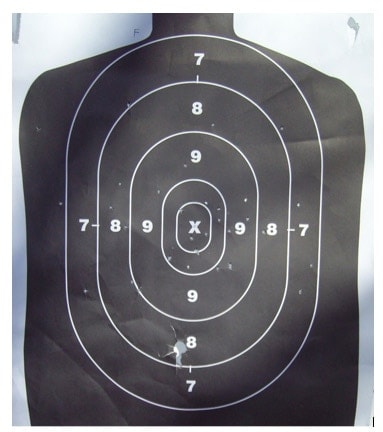 The pattern created by the size T Hevi-Shot at 30 feet. The fact that Hevi-Shot pellets are irregular in shape did not seem to adversely affect the pattern. (Photo: Jason Wimbiscus)

A sample of the recovered pellets showed that many had deformed into an oblong shape, some of which had also had spherical protrusions. Given the hardness of the shot, the apparent deformation surprised me and I suspect this particular shell may have contained defective shot. Upon cutting open an unfired round from the same box, I found that it also contained irregular, and unevenly sized shot. I was also perplexed by the use of what are apparently some kind of seeds as a buffer material. A little research revealed that the rounds were not defective and Hevi-Shot is simply irregular in shape. The buffer material consists of flax seeds. 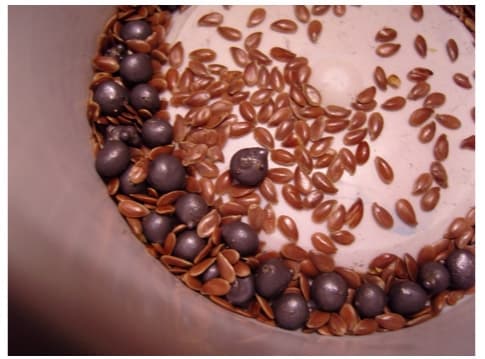 An unfired Hevi-Shot payload. The pellets are irregular in shape and the buffer material is flax seed. (Photo: Jason Wimbiscus)

Size F buck is .22 inches in diameter meaning a significant number of pellets can be packed into a 12 gauge hull. In this case, I stuffed 1 ¼ ounces of BPI Super Buck into a Fiocci hull over 36.0 grains of Herco and topped it with a good roll crimp. I’m not sure of the velocity since I don’t chronograph shotshell loads (wad components fly irregularly and can destroy a chronograph) but my data manual indicates they should have a muzzle velocity slightly over 1200 f/s. 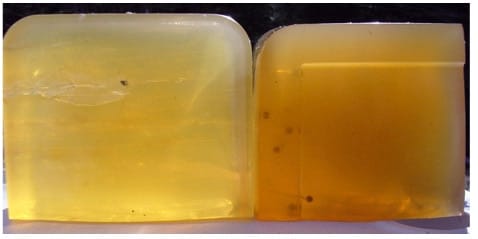 A cross section of the cavity created by the size F buckshot load. The entry point is at the left of the frame. (Photo: Jason Wimbiscus)

All of the pellets that impacted the block passed through the first block and then penetrated 1 to 1.5 inches into the second block. The maximum width of the cavity was 5 inches. This load also patterned quite well with a maximum diameter of 15 inches. 21 pellets stayed within the 9-ring. 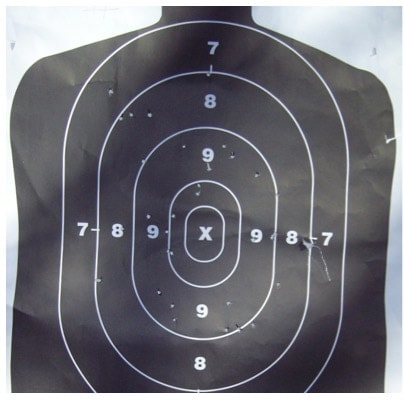 The size F buckshot pattern at 30 feet. Most of the payload stayed within the center most rings of the target. (Photo: Jason Wimbiscus)

I’m neither a forensic pathologist nor a tactical expert, so I’m hesitant to say definitively whether or not the tested loads are adequate for personal defense inside the home. The 00 buck load penetrated the deepest into the gel blocks, is tried and true, and has proven effective in a variety of real-world encounters. The Remington Express load seems like a less than adequate choice as penetration was minimal and could be further adversely effected by the presence of heavy clothing or other barriers.

In terms of penetration and cavity diameter in the gel blocks, the BB, T, and F loads were all very similar and I would expect them to perform adequately against an assailant at an across the room distance of 15 feet or less. That being said, smaller pellets do shed velocity and energy faster than their larger counterparts, meaning they may be a poor choice for situations where longer range altercations are a possibility. As far as overpenetration is concerned, it is likely that all of the tested rounds, including the Remington Express load would be capable of penetrating interior walls and posing a danger to those on the other side.