Go ahead, read that title again, skip to the bottom of the page, comment that I’m a liar, a sell-out, an idiot, a hack etc. Century Arms, once held as the king of canted AK sights, has managed to achieve the impossible. The company built a U.S. manufactured, milled AK on par with offerings from much more expensive vendors. Purists beware, this AK is about as milspec as a Kel-Tec bullpup.

Skeptical? You should be, few importers amass enough capital to not only switch production from foreign to domestic, but also spearhead R&D to better the product. Will all this invested money actually pan out? Depends on how many people Century can convince to give them a second chance.

Mechanically inclined gunners have known for years that the so-called “wide-spread, unfixable” issues with Century products were easy enough to (properly) fix with a vice, hand tools, patience and an hour or so of angry grunts. I’m referring primarily to canted sights.

Previous rifle failures aside, what makes Century’s newest AK worth looking at? Well, for all us patriotic purchasers, the fact that the entire gun is made in the good ol’ U, S of A. If the C39 were a stamped gun, I wouldn’t be terribly impressed; folding receiver flats can be done in the most isolated, desolate corners of Pakistan. However, Century went the extra mile and purchased the tooling required to manufacture milled AK-type receivers. Which brings the previously thousand-dollar plus realm of the milled AK down to a level affordable for all us plebeians

Not content to manufacture a clone of existing milled AK-rifles, Century improved the design by introducing its own muzzle brake, safety lever mechanism and magazine release. While this might seem insignificant, they add up to an AK that both younger and smaller-framed shooters can easily manipulate.

Add to this Century’s inclusion of hardwood furniture and chrome-lined barrel, and the only advantages of buying a milspec milled AK-47 clone is the ability to mount a bayonet and cleaning rod. Though all is not peachy with the new design, it lacks one core element that would have set it well ahead of the competition, a scope rail. AKM pattern rifles have included a side rail to mount optics for decades, but Century’s C39 does not. Some argue it wouldn’t be period correct to have that mount on a milled receiver. However, since Century already strayed so far from milspec, this seems like a cost-cutting measure rather than a matter of authenticity. 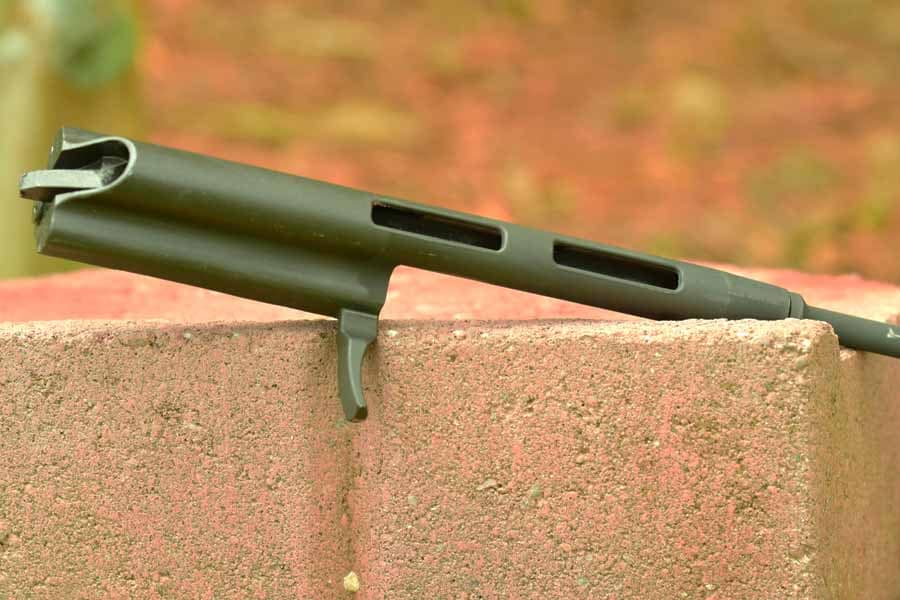 The lightened bolt carrier is a strange inclusion. (Photo by Jim Grant)

Now that Century is responsible for every aspect of the rifle, how does it compare to competitors? I wanted to find out myself, so despite lacking gauges and high-precision calipers, I decided to adopt a Soviet methodology of good enough. I checked the fit of every major variety of AK magazine, the fit and finish of the furniture, the trueness of the front sight tower/gas tube and the immeasurable smoothness of the bolt carrier.

AK owners tend to have a solid stockpile of magazines, generally of one specific make, and don’t like having to buy magazines specific to a rifle. If a new rifle only correctly functions with one variety of magazine, the cost of ownership can greatly affect the overall value of the purchase.

In my testing the C39, magazine lockup was tight with no ratting when utilizing the following magazines: American Magpul, Arsenal polymer, Bulgarian synthetic commercial smooth side, Chinese steel, Hungarian steel 20-round, Korean steel, Polish polymer, Soviet steel and Bakelite. However, Romanian steel magazines did not lock-up tight, though functioned flawlessly. Additionally, the C39’s extra wide/long magazine release made extraction effortless for all these mags. 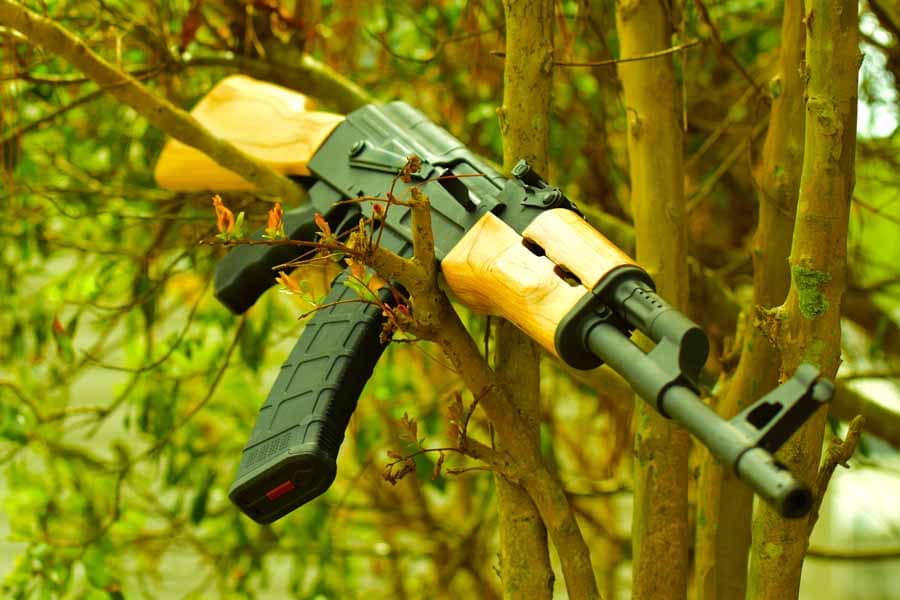 The C39, lying in wait for its prey. (Photo by Jim Grant)

The finish of the furniture is great, though the fit could use some work, the stock in particular, though evenly stained and finished, had large uneven gaps between the rear tang and the stock’s inletting for it. What does this mean for people buying one to shoot? Nothing. The stock’s fit is tighter than an accountant’s wallet and the gratuitous spacing is only noticeable if you’re looking for it.

Using a laser level, the C39’s sights were straight enough for the 1 mm width of the beam to cover the majority of the front sight post while staying inside the rear sight’s notch. Straight enough for all my misses to be user-error.

Internal fit was measured by checking how smooth the bolt could be manually cycled. Due to the carrier’s interaction with both the internal rails and trigger group, AK bolt travel has spots of resistance, as opposed to a consistent pull. This is true for all AK rifles, though milled ones tend to have smoother actions since their rails are milled into the receiver, they tend to be straighter and more finely polished. This doesn’t mean all milled AK’s are smoother than their stamped counterparts, but milled receivers are more likely to be. 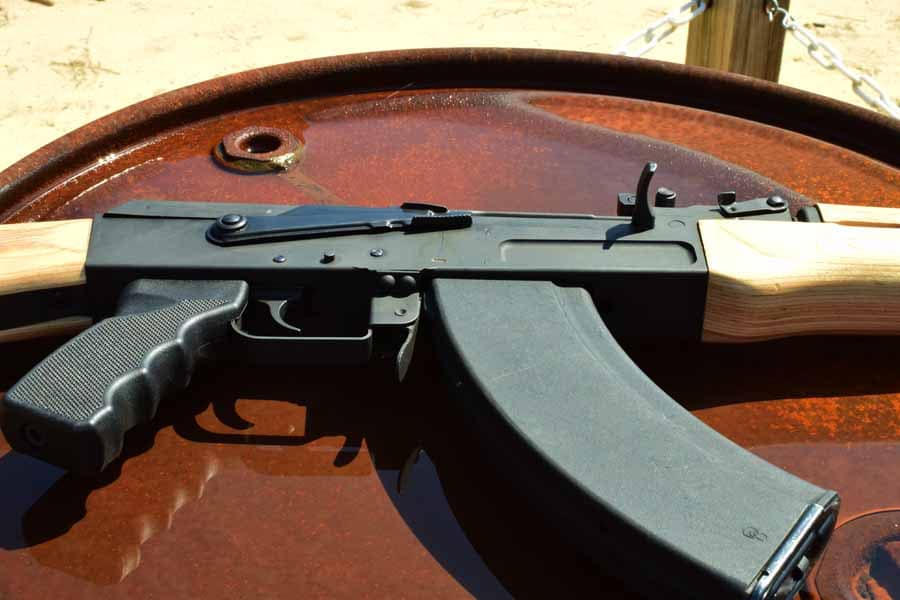 The safety’s finish differs from the receiver. (Photo by: Jim Grant)

Century, having decades of experience building AK rifles, decided to make some changes to the design. The first that many people will notice is the removal of the bayonet lug and cleaning rod from the barrel assembly. This was done for a couple reasons: to make the rifle legal in areas with restrictive gun laws, and to cut weight and costs since more people don’t use the rod or mount a bayonet. While initially strange in appearance, it quickly grows on you. Internally, there was only one large deviation from the norm, a skeletonized bolt carrier. An interesting, if unconventional inclusion.

Speaking of appearances, the finish on Century’s AK is a matte gray phosphate, with the exception of the safety lever, which appears to be blued. The wood is a laminate blonde, but comes in grey and brown laminate and makes for a handsome, iconoclastic appearance to all but the most discerning eye.

Accuracy – 4/5 – Century’s C39 performed almost as well as my Arsenal SAM7SF in terms of accuracy, with groups ranging from 2.9 inches to 5.2 inches at 150 yards. While no tack-driver, this is more than accurate enough to make bowling pins and grapefruit very nervous at 100 yards.

Ergonomics – 4/5 – While AK rifles aren’t renowned for their user-friendly controls, Century’s C39 makes a solid attempt to alleviate some of these woes by including a Tapco G2 trigger, finger-grooved pistol grip, and a reduced tension safety lever.

Reliability – 5/5 – With 1,000 rounds of Red Army Standard Ammunition fired through the C39 resulted in zero failures, though the handguard got very warm.

Value – 4.5/5 – With an MSRP of $799.99 the C39 might seem a little overpriced, but actual real-world prices are much closer to 599, making this rifle a serious competitor for AK fans who lust for a milled gun without paying collector prices.

After Market Support – 5/5 – While the aftermarket parts selection for stamped AK rifles is certainly more robust, milled AK rifles can accept most of the same accessories. The biggest exception being the buttstock, whose two-tang design and downward angle prevent stamped stocks from correctly fitting.

Overall – 4/5 – Century’s C39 takes the importer’s name in a previously unexplored direction and mostly succeeds. I would prefer the fire feature a side rail and bayonet lug because I’m a purist, but that doesn’t detract from the quality of Century’s product. The unexpectadly high quality of these rifles makes me wonder if their previous in-house milled gun, the VZ2008 wasn’t simply a test run for these rifles. Either way, the new C39 is a solid deal for a first-time buyer who wants an unbreakable rifle at an unbeatable choice. The only cheaper way to get a quality milled AK would be to inherit an old Norinco or Polytech, and good luck getting customer support for either of those rifles.