The Chiappa Rhino will make you popular (at the range) 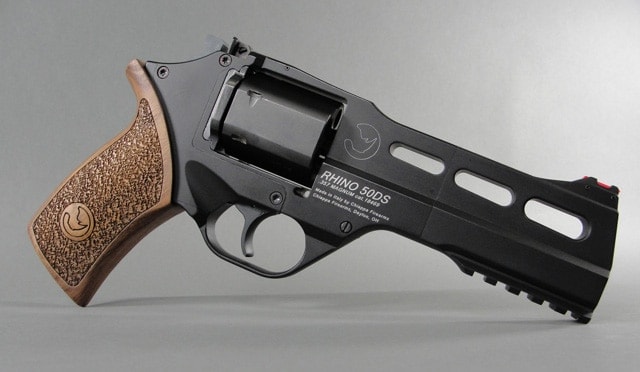 The Chiappa Rhino 50DS has a 5-inch barrel, but is available in three other barrel lengths. What makes the revolver unique is that the barrel aligns with the bottom of the cylinder. (Photo credit: On Point Firearms)

I am an unrepentant nerd, so when I saw the Chiappa Rhino 50DS, my first thought was “If Robocop and Clint Eastwood had a child, this is the gun he’d be packing.”  It was funky and chunky and mean looking.  Plus, it shared a design lineage with the indescribably cool Mateba Unica autorevolver.  In the end, I had to buy it.

The 50DS comes with a 5-inch barrel (but 2-, 4- and 6-inch barrels are also available) and is constructed from an aluminum alloy for weight reduction, with steel parts used in the obvious places such as the barrel and cylinder.  There is a rail for mounting a light or laser if you enjoy accessorizing.  Walnut grips are standard on all models but the snubbie, and they are gorgeous, sporting an almost organic stippled design and a Rhino logo.  The Chiappa Rhino looks and feels like a quality handgun.

What’s most unusual about the Rhino though is the fact that the barrel sits at the six o’clock position relative to the cylinder, which lowers the bore axis.  The logic behind this is that such a configuration will reduce perceived recoil and muzzle flip.  It’s not the first revolver to place the barrel at this position, but it’s still an unusual design, certainly unlike any other revolver currently in production.  The cylinder is also hexagonal, a nice touch that lends the Rhino a slimmer profile. 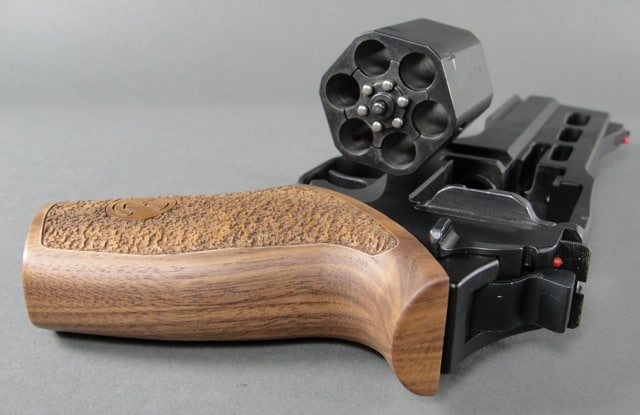 When shooting the Chiappa Rhino it feels as if it recoils backwards instead of up. (Photo credit: On Point Firearms)

The Rhino looks cool, sure, but right away I had concerns regarding the grip.  Aesthetically, it works; it even looks like a Rhino horn.  But it was simply too small for even my average-sized hands.  And though the walnut looks classy, it just wasn’t as grippy as I’d have liked.  Extending the stippling 360 degrees would have gone a long way, in my opinion.  Chiappa does offer other grips through their site, but I didn’t have an opportunity to try any of them.  If you like a smoother, smaller grip, the stock version may well work perfectly for you.  Speaking of grip, your off hand fingers will be much closer to the cylinder than with a regular revolver, which is worth being mindful of.

Rapidly acquiring your target is a simple matter with the Rhino’s excellent sights (and the long sight radius on the 50DS model).  The rear sight is adjustable, and the front sight is a red fiber optic that stands out beautifully in a variety of lighting conditions.  Once I pulled the trigger, the shot went where I aimed it.  I’d go so far as to say I’m more accurate with the Rhino than with most other handguns I’ve fired.

Shooting the gun, however, is where we encounter our first serious hitch in the giddyup.  Shooting in double action was a challenge.  The trigger was unpleasantly heavy, though it was wide enough to avoid being painful, and it staged well.  Still, I’d be concerned about shooting the Rhino accurately in an adrenaline-filled self-defense situation.  But I didn’t purchase the 50DS as a self-defense weapon ˗- I wanted a range toy.  So how did it shoot in single action mode?

Cocking the stiff, stubby “hammer,” which is really just an external cocking lever and not a true hammer at all, was not possible with my dominant hand.  Using my off hand to cock wasn’t a huge chore however, and I can’t help but wonder if the mechanism will loosen up a bit over time and become easier.  Once it was cocked, the actual trigger pull in single-action mode was smooth, crisp and light.  A word of caution: the cocking lever doesn’t stay back in single action mode, but Chiappa did engineer a red indicator tab that plainly shows when the gun is cocked. 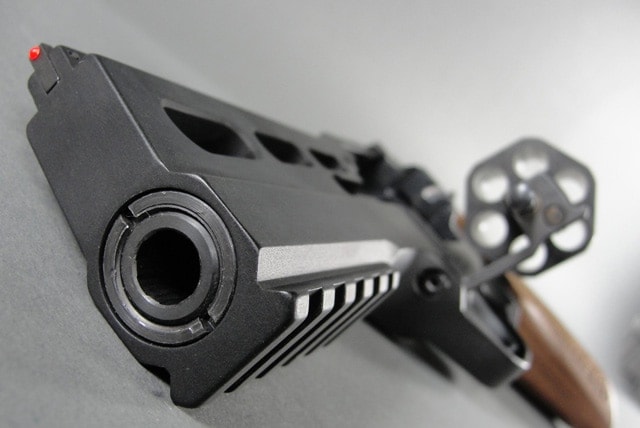 The Chiappa Rhino is also available chambered in .357 Magnum/.38 Special, as well as .40 S&W and 9mm. (Photo credit: On Point Firearms)

Of course, the Rhino’s main selling point is the recoil management that comes from the lowered bore axis. As mentioned, Chiappa claims that placing the barrel at the cylinder’s six o’clock position reduces perceived recoil and muzzle flip.  Well, they’re being honest.  It’s easy to shoot .357 Magnum loads all day out of this revolver, easy to reacquire your target (assuming you’ve become accustomed to the hard DA pull), and generally easy to fall in love with this unusual gun.  As for .38 Special, it produces no more perceived recoil than shooting a rubber band.  In this regard, the Rhino absolutely lives up to the sales pitch, and may be a good option for recoil sensitive shooters.

Chiappa makes the Rhino in a variety of barrel lengths and calibers.  I almost wish in retrospect I’d bought the snubbie.  I would’ve saved a few bucks over the $750 or so this set me back, and I’m not a fan of big handguns anyway. If it’s too big to carry, it really doesn’t fill a niche in my personal collection.  But I have to admit, I loved all the great conversations I had with people at the range about this gun.  Folks would ask what I was shooting, I’d let them put a few cylinders through it, and generally they were impressed.  And as I said, this revolver seemed to want to put bullets in the 10-ring for me.  The way I shoot, that’s saying something.  Despite a few quibbles, I had a blast with the Rhino.