The Cimarron Arms 1911 is not your standard run-of-the-mill clone.  Most of the 1911’s made today are more in line with the 1911A1, but not the Cimarron. It lacks the frame cutouts, has a smooth mainspring housing that hasn’t been raised, and has the small sights of the old Colts.  In essence it’s built to look like a 1911 that was made in 1918.

Stepping out of the 19th Century

The Cimarron Firearms Company is mostly known for their cowboy type guns and most of their business is directed to the Cowboy Action Shooters and others who like these classic guns.  They mostly offer Italian made copies of the Colt Peacemaker and different Winchester lever guns and other classic old west firearms. Recently a spin off from the cowboy shooting crowd has been gaining in popularity: The Wild Bunch. 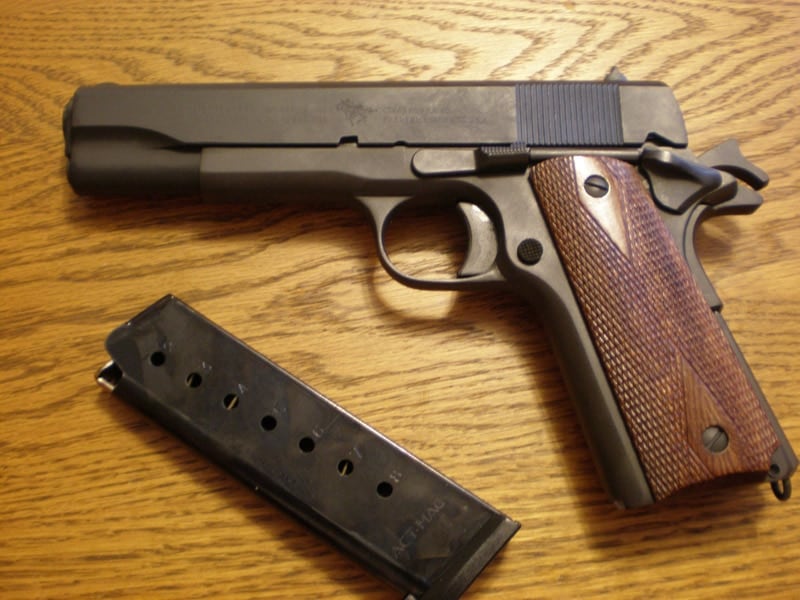 The Wild Bunch gets its name from the Sam Peckinpah’s classic western of the same name. The film is about an aging group of outlaws as they try to keep pace with the world in 1913.  The characters lived and died by their horse, the six-gun and lever action, but this is all changing. Cars, 1911s and a machine gun all show up to their amusement and demise.

The Wild Bunch shooting sport is based off of this.  They use 1911s instead of single action revolvers, which is the reason Cimarron has gotten into the 1911 market with a pistol styled after the earliest 1911s. 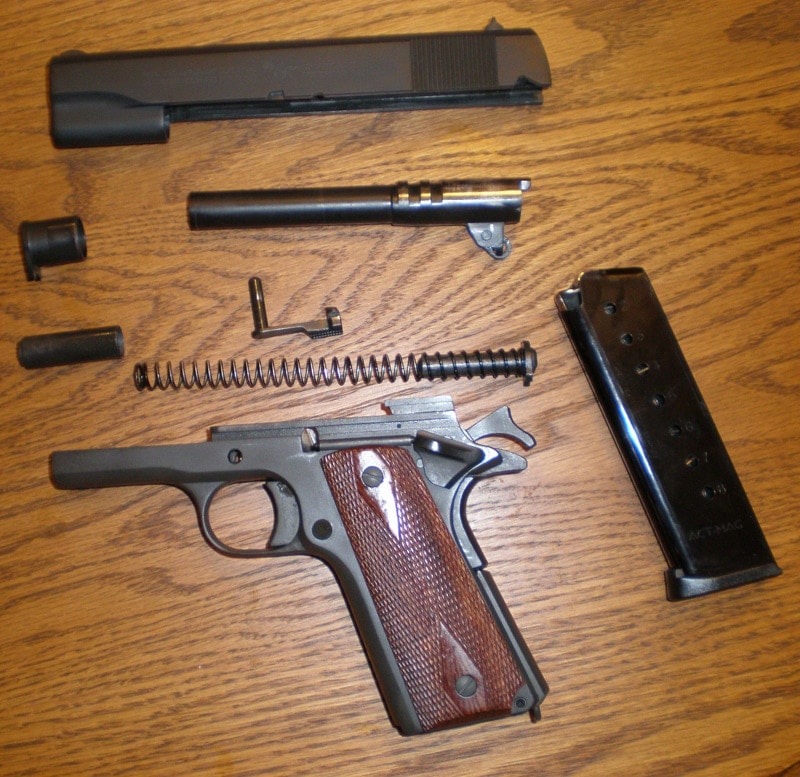 The Cimarron 1911 is made in the Philipines by Armscor, the same makers of the Rock Island brand and others. A detail that stands out on the Cimarron 1911 is its minimalist markings.  It seems a lot of the newer 1911 makers have huge billboard letters on the slides to advertize the maker, but the Cimarron stays true to the subtle style of the original Colts.  The patent dates are there on the left side and there is even a horse — not a Colt prancing pony, mind you, but a Cimarron horse and rider.  Classy and classic.

The pistol Cimarron sent me for review is the parkerized version.  It is a pretty close copy of a WWI era Colt, but it isn’t perfect.  For one thing it is parkerized, a finish that was not in use yet. Cimarron does offer them in blued, which would be more accurate, and nickel finishes.  The other things are subtler.  The checkering on the magazine release, slide lock and the recoil spring plug are not as fine as on the old Colts.  The thumb safety is a lot different too and the trigger is a little short for a true 1911, but not as short as a 1911A1.

But these issues are a little nitpicky — it’s a $500 pistol!  If a perfect copy is what you seek in a pre-Great War 1911 there are other ones out there.  Turnbull and Cylinder and Slide have both made very true to original copies.  Or you can (prancing) pony up for an original. The Cimarron is the only true 1911 copy in its price range. 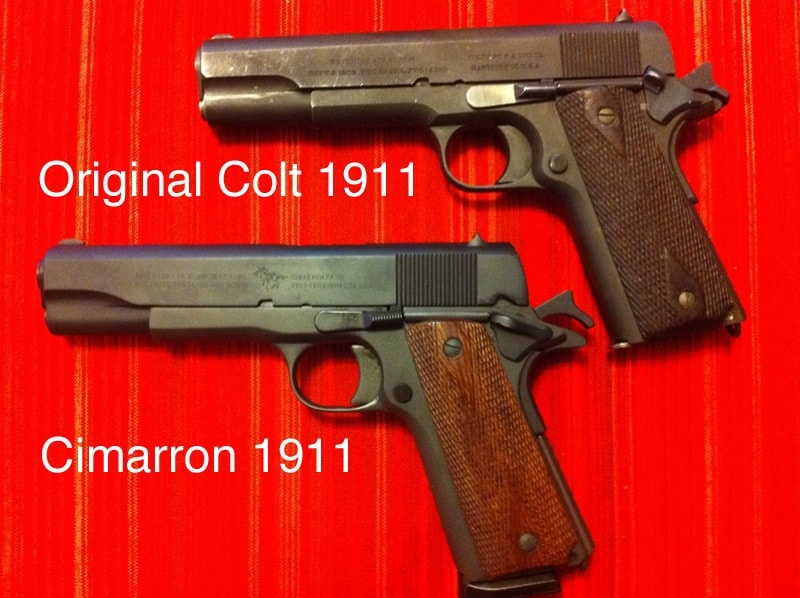 The Cimarron 1911, bottom, and an original Colt 1911. If they touch, they actually cancel each other out and the world as we know it collapses.

As with all new guns I did a basic safety check as soon as it came out of the box.  The Cimarron had an issue with the grip safety.  The hammer would drop without the grip safety depressed when the trigger was pulled.  Obviously this is a major safety concern and the folks at Cimarron agreed.  I was given the number to Armscor (the makers of the pistol) to have it serviced on their dime.  I received it back in just under a month fully functional without any hassle.  The return was easy and the repair was done correctly.  A gun with a faulty safety is a big deal and conversely so is the way the maker handles the issue. Cimarron and Armscor both provided excellent services.

Whoo-ee! This is better than a hog-killing!

Once I got the Cimarron 1911 back it was time to put it through the paces.  Being an older style 1911 I stuck with ball ammo.  I ran multiple boxes of 230 grain Winchester FMJ through the pistol without a single issue.  It functioned just as it should have.  I shot some pretty good groups with it too.  From 25 feet I shot a five-round group that was just under an inch, four were clover leafed in the bulls eye with one floater an inch out.  That is one heck of a group for a millspec 1911.  I shot other groups that were just over an inch from 25 feet as well.

At 25 yards it did open up, but that is to be expected with the ammo and the pistol.  I’m sure with some trial and error a load could be found that would shoot better.  I was still able to get a 6.5-inch group from the 25-yard mark in an isosceles stance.  That is still pretty good from a milspec 1911. 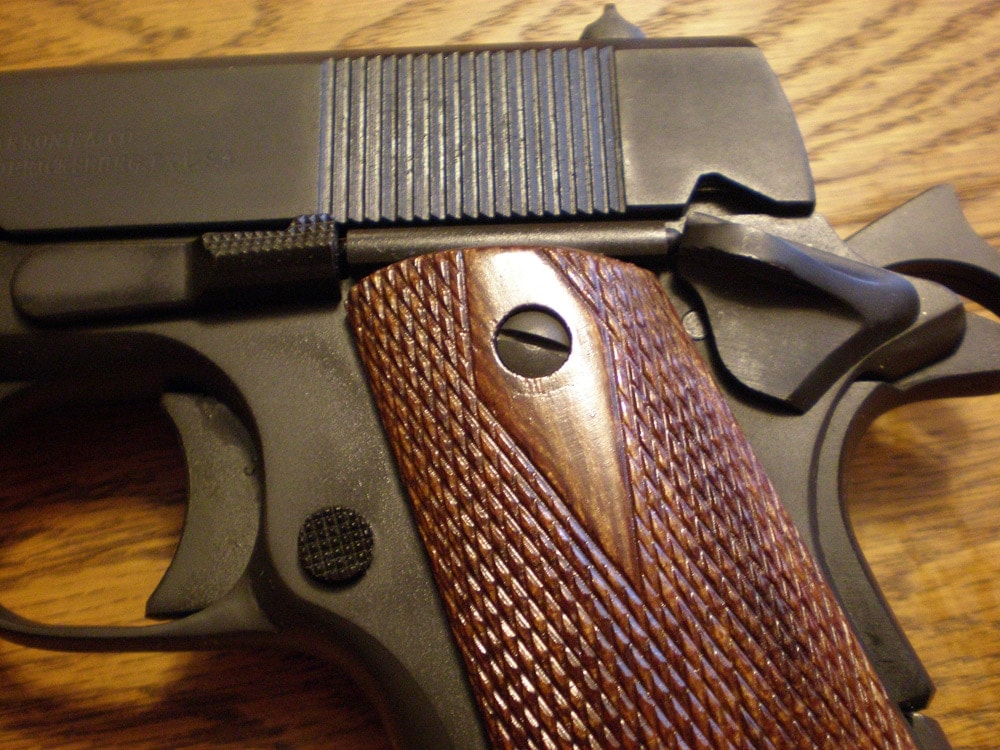 The first model of the Cimarron 1911 had a broken grip safety, but it was a test model and they quickly repaired it.

The sights are the old style 1911 ones.  They are small — really small.  They don’t give the fast target acquisition that more modern combat sights give, but that is not what this pistol is about.  The little sights did the job very well.

The trigger on the Cimarron is great.  It is lighter than the original 1911 that I used to compare the looks of with.  It is right at four pounds.  The take up is a little long with a bit of grit but once the slack is worked out the break is great with minimal over travel.  Overall the trigger was nicer than some higher end pistols I have shot.

I really like this 1911.  Even though they’re not a perfect copy, I appreciate the homage paid to the originals.  Once the safety issue was cleared up it did exactly what it was suppose to do and even a little better.  If you are looking for a 1911 in the $500 range this one would be a good choice.  It’s not a tricked out Wilson Combat nor does it pretend to be. It is a basic, good shooting and good looking 1911 and not an A1.