Blessed are the Peacemakers, for they are damned nice guns. And the Cimarron Model “P” is one of the finest reproductions of Colt’s famous handguns available.

OK, one of the confusing things is that the Cimarron Model “P” is actually made by Uberti firearms in Italy. Uberti offers their own line of good quality reproductions of these guns, which go for a bit less money. So what’s the deal? Why get one of these and pay more?

Because the Cimarron guns are made to Cimarron’s specifications, with a better fit and finish. Whether that is worth the extra money depends on individual preferences. 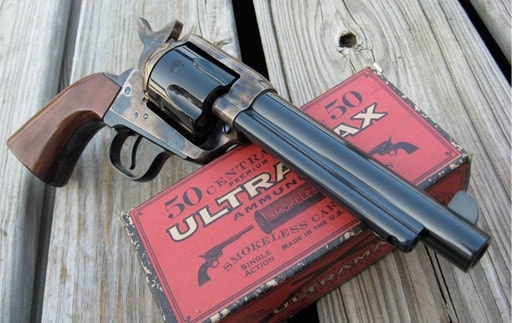 I can say that the two Cimarron Model “P” firearms we used in the BBTI tests – one with a 5.5-inch and one with a 7.5-inch barrel – were very high quality guns. They were both in .45 Colt, had the nice case-hardened finish, very nice bluing, and one-piece smooth walnut grips. The fit and finish was quite good – superior to most factory production guns from even the best manufacturers.

They have a simple blade front sight and a basic notch rear. This is nothing fancy, but is historically accurate: it was typically the case that an owner would have to file the sights themselves to adjust them. I found the two guns we tested to be accurate out to 25 yards, grouping nicely (about four-inch groups), but with some variation depending on the ammunition used. I would expect that you could settle on a good load for your gun, tweak the sights appropriately, and be quite accurate with it. Both guns handled recoil just fine. I found the 5.5-inch barrel model to have the better balance of the two, but that is a personal reaction.

They are just single-action. The hammer must be drawn back, and there are different positions as with your typical Colt SAA – a partial cock as a safety position, half-cocked where the cylinder indexes, and full-cock. Both of the guns we shot were fairly new, and while the trigger was smooth on each of them, they were quite stiff. I understand that people who get these guns for competition in Cowboy Action Shooting will frequently re-work the springs to make them faster and easier to shoot. Unless you’re looking for this kind of competitive advantage, the original springs would be fine.

But for general “fun” shooting, whether just out at the range, or for having a good time at a Cowboy Action Shooting event (without being too worried about speed), the Cimarron Model “P” is an excellent handgun. The .45 Colt cartridge offers a great deal of flexibility in terms of power and bullet configuration, making it suitable for everything from plinking to hunting. The guns are built quite well, and are robust enough to stand up to plenty of hard use for years without a problem.

I wouldn’t choose a Model “P” as a self-defense gun, due to the single-action, size, and weight. Certainly I wouldn’t want to try to conceal such a gun. But as a home-defense gun, you could certainly do worse.

Since the Model “P” is built to standard specifications for a Colt Peacemaker, there are plenty of accessories available for the guns, and it should be easy to find new grips or holsters or anything else you would want to personalize one of these guns.

So, is a Cimarron Model “P” worth the money over and above what you’d pay for one of Uberti’s own models? Again, that’s going to be a personal decision. If you’re just looking for a good quality shooter, perhaps not. But if you like the extra quality that is typical of the Cimarron guns, then you’ve certainly got that option.