Gun Review: Cimarron Plinkerton .22 makes for one heck of a--well--plinker

I have always had a soft spot for Old West style revolvers. As a fan spaghetti westerns, I can’t help but get a little excited at the prospect of a single-action, ancient-style revolver. As such, the Plinkerton .22 by Cimarron Firearms is a gem I thought worthy of a review. 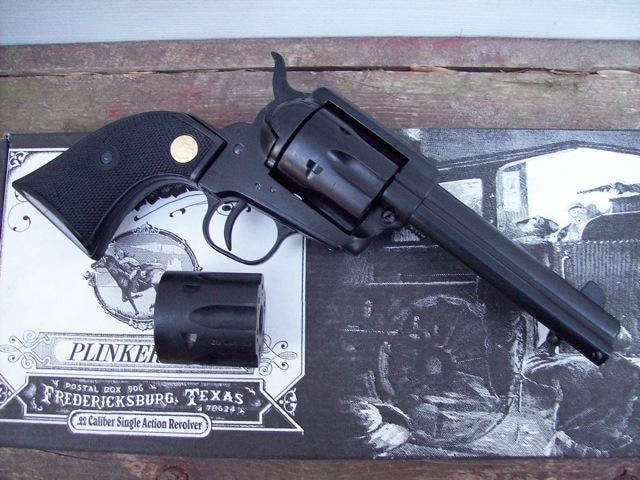 The Cimarron Plinkerton is chambered in .22 LR, but also comes with a cylinder readied for .22 Magnum. (Photo credit: Gun Auction)

As with most of the Old West style revolvers, the Plinkerton is heavy. However, since it’s only a .22 that makes for one heck of a… well… plinker. It tips the scales at 2 1/4 pounds, and all of the weight is in front of the handgrip. That makes it a tad nose heavy but not so much that your hand is shaking after three or four rounds.

The grips on the Plinkerton are a handsome light walnut and they really make the gun look sharp. They also feel good in the hand, as most wooden revolver grips do. This model is also available with checkered plastic grips but in this author’s opinion, plastic grips have no place on a Western style revolver. I would spring for the walnut, myself.

The matte black barrel is 4 3/4 inches long, which is a great length for a .22 revolver. It slides into a holster or stows reasonably well, but still retains the inherent accuracy of the round. I think the gun looks great and feels nice in the hand.

The Plinkerton also has another cool feature: an additional .22 Magnum cylinder. If you have no experience with .22 Magnums, they are fun. If you have, then you know what I’m talking about. There are folks out there who claim a .22 Magnum is even a decent defensive round, although there are just as many who disagree. They are a heck of a lot more powerful than a regular .22 round, I can tell you that.

I’ve always liked guns with the ability to shoot multiple calibers or types. The .357 wheel gun comes to mind since they can also send .38 Special rounds down the barrel. There are also conversion kits available that allow 1911-style .45s to shoot .22 bullets. The Plinkerton is cool because not many wheel guns have the ability to shoot both LR and Mags. 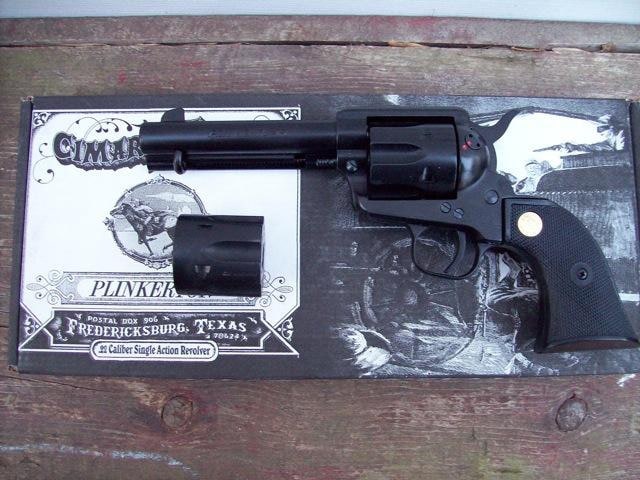 As with many Old West style revolvers, the cylinder doesn’t just swing out to allow quick reloads. To the right of the hammer, there is literally a door that swings open. Then, as the cylinder is manually spun, the rounds can slide in or out, one at a time. That’s likely one reason you don’t run into too many of this style at the range; they just aren’t as practical as today’s guns.

Along the underside of the barrel there is a handle that rotates downward. When unlocked, it can slide toward the cylinder. As it moves, an internal rod kicks out the spent casings, also one at a time. It’s a lot of fun to see such a different-style revolver.

All the pieces on the Plinkerton fit very well together, and the gun feels very solid. It doesn’t rattle when shaken, and the hammer comes back very smoothly. It doesn’t have a hair trigger, but it doesn’t take a lot of effort to squeeze either. It’s a nice, medium, in-between feel that’s solid without tearing your finger up.

My only criticism, and, in all honesty, I might’ve been missing something, it seemed like in order to get the cylinder to rotate the hammer had to be at about a quarter-cock — for obvious reasons, this seems less than safe for loading or unloading the wheel gun. ‘Course, back in the Wild West, safety wasn’t a great big concern.

The Plinkerton is available, as I mentioned, with either plastic or walnut grips. Neither requires a bank loan. The plastic grips model will run you $218, but the walnut grip model will only put you back at a reasonable $251.86.

The Plinkerton .22 dual cylinder by Cimarron is a fun gun. It’s great for starting conversations either at the range or at home, and you also get to own a piece of American history — well, at least a replica. If you are in the market for a .22 wheel gun and like Western movies, I’d check out the Plinkerton — you might just be glad you did (I guarantee it).