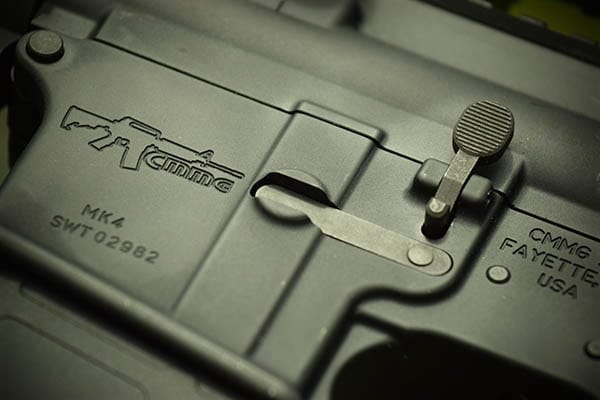 The finish on CMMG rifles is clean, even and durable (Photo: Jim Grant)

CMMG’s new Mk4 HT series of rifles are strange amalgamations of contradicting features that fuse into a handy carbine that excels at different applications.

The rifle features a threaded, heavy taper nitride chrome moly (CrMo) steel barrel topped with a castellated thread protector, which indicates the rifle is designed for precision shooting with a sound suppressor.

The MK4 HT’s lack of iron sights also seems to further cement this conclusion, but the lower receiver’s setup suggests something entirely different.

The Mk4 HT’s lower receiver is Mil-Spec (with the exception of the fire control system), but bare bones. The pistol grip is standard A2 style and the stock is a four-position, M4 type. Additionally, the rifle’s full-length, RKM11 KeyMod hand guard with rail-slots at the three, six and nine o’clock positions, like the furniture setup, suggest the weapon is designed for urban warfare and closer engagements.

So is the Mk4 HT rifle a mini-designated marksman rifle, a close-quarters carbine, or just a solid basis for a tricked-out custom three-gun rifle? Just like on all those trick SAT questions, it’s D, “all of the above” 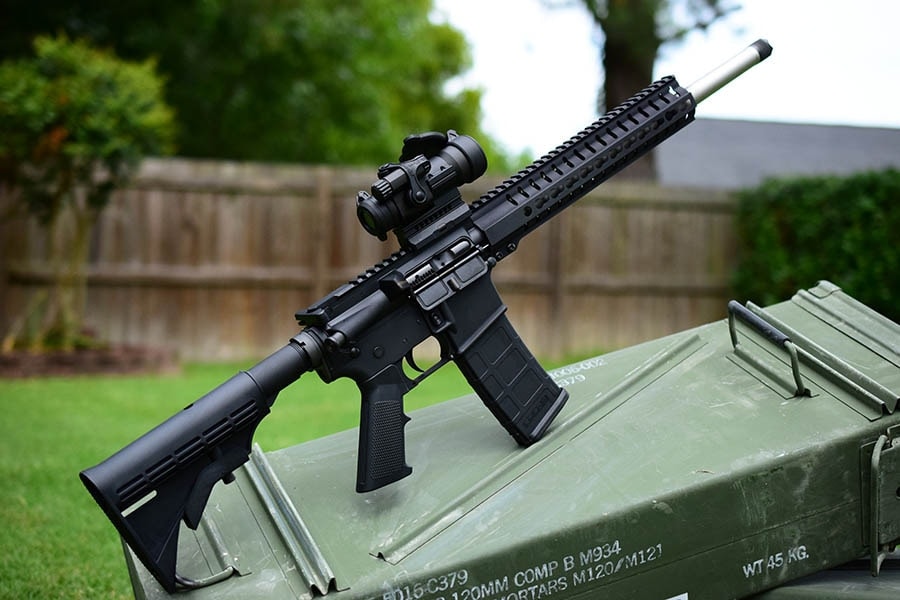 The CMMG carbine is well-suited to distance work within the effective range of the cartridge with its heavy, free-floated target barrel, despite being a relatively short 16.1-inch barrel.

The old school of thought on barrel length with precision rifles argues that any barrel under 22 inches is too short for acceptable accuracy and wastes too much projectile energy to be useful as a hunting rifle. This is half true. Yes, barrel length effects projectile velocity which inturn effects muzzle energy and ballistics, but accuracy is not so straightforward. 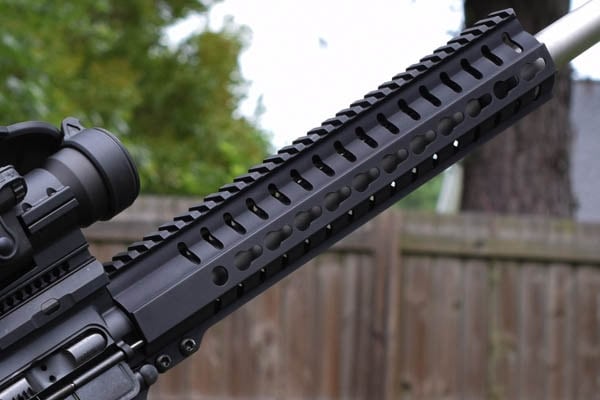 Accuracy, at least in terms of shooting, is a measure of consistency. In fact, everything about accurate shooting boils down to consistency. A shooter with bad habits like flinching and jerking the trigger, can be a sharp-shooting legend if he flinches and pulls the trigger terribly the exact same way every time.

So how does the Mk4 HT increase shot consistency and by virtue, accuracy? With an ultra-rigid, heavy-contour barrel. The short length, heavy profile barrel provides calmer harmonics than standard length, military-profile offerings, which reduces the barrel’s movement during operation. The barrel’s extra girth further aids accuracy by conducting heat slower from rapid firing, preventing rounds from walking off target as the barrel heats up and changes its point of impact.

Benchrest testing shows the best accuracy is achieved with hand-loaded, 75-grain Hornady BTHP bullets, when loaded with 23 grains of Varget powder. This load is the favorite of my custom 18-inch special purpose rifle (SPR) build, and proved accurate and enjoyable to shoot in the CMMG rifle as well. 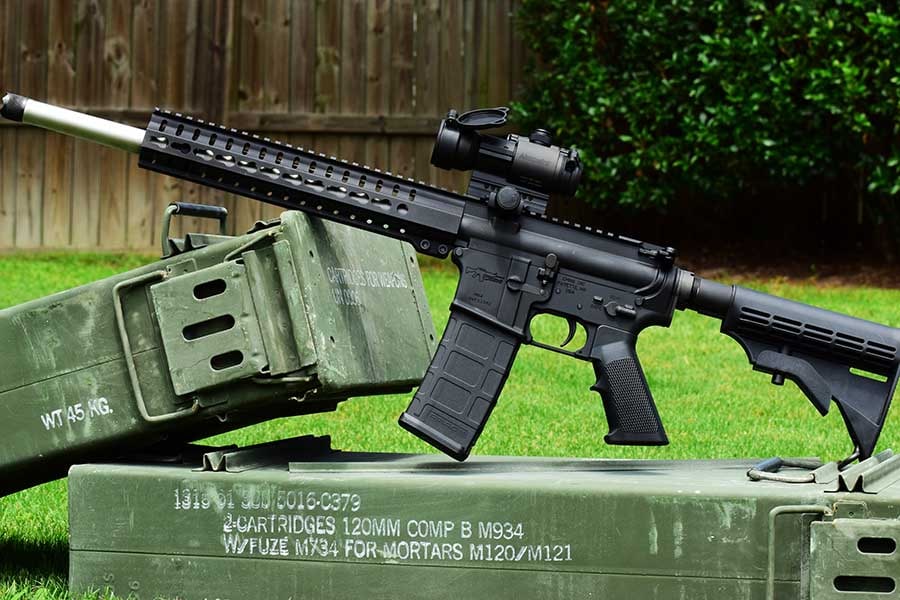 During the course of my review I fired 100 rounds of handloaded 75-grain Hornady BTHP loaded with Varget powder, 350 rounds of Wolf 55 grain FMJ 350 rounds of 62-grain Tula HP ammo and 750 rounds of Federal XM193 without a single stoppage.

While the Hornady hand-loads were by far the most accurate, averaging just under two minutes of angle (MOA), the Federal 55-grain, mil-spec ammo was the most blasty and enjoyable to shoot. Throughout the review, the barrel did its job, keeping cool for the first 100 or so rounds, but dissipates its heat slower than traditional profile barrels. 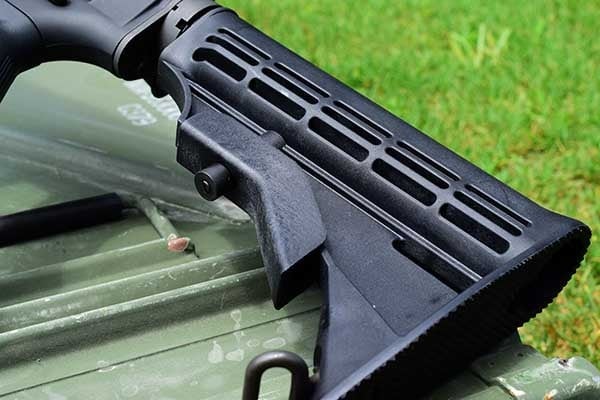 While a longer barrel lends itself to better ballistic performance and a longer effective range, it precludes the rifle from being useful in any other role. A role such as a urban combat carbine, where a shooter needs a light, handy rifle that still has enough ballistic performance to engage targets at 200 yards without having to lug around a battle rifle, like the M14/M1A.

That’s where the KeyMod rail really comes into play. Instead of opting for a full-length quad-rail which provides enough rail real estate to mount every tactical accessory Aimpoint makes, CMMG chose a rail that is customizable to the user’s immediate mission needs. They chose this, presumably, to save weight and it really makes a difference, especially with the HT’s heavy barrel.

Normally, AR15 rifles with heavy barrels are a nightmare to carry, especially with a railed forearm. The KeyMod rail allows users to shave precious ounces off the front of the rifle, where the extra weight gains mechanical advantage against the shooter’s arms, which act as a fulcrum. This is why bullpup rifles, with their more centrally-located balancepoint, feel lighter even when they aren’t. 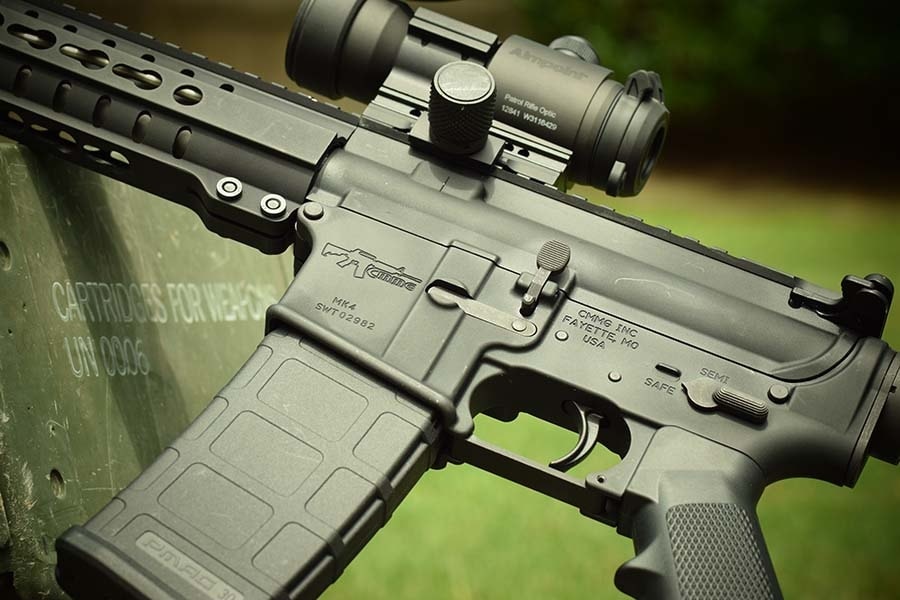 The controls on the Mk4 HT are exactly what you’d expect from a mil-spec AR-15 (Photo: Jim Grant)

In fact, the only area where CMMG’s rifle isn’t absolutely flawless is in its choice of furniture. It ships with standard USGI M16A2-type pistol grip and an M4-style collapsible stock. These were likely chosen as a cost-saving measure, and doesn’t detract from the rifle’s value, since most shooters will replace these anyway. This is a good choice on CMMG’s part, as it keeps the Mk4’s MSRP closer to the $1000 mark at $1095.95. 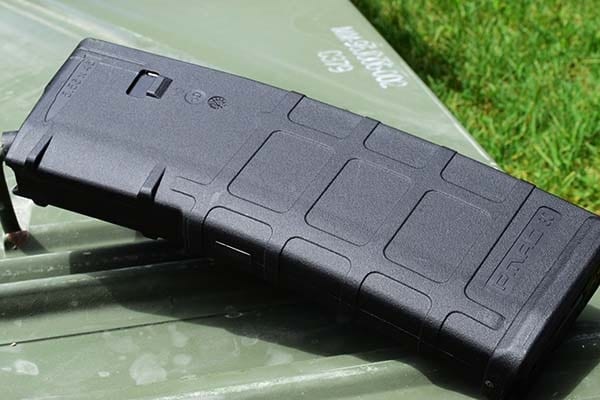 The Mk4 might not include Magpul furniture but it does ship with a Gen 3 PMag (Photo: Jim Grant)

With its reduced weight, compact size adjustable stock and more central balance, the Mk4 HT makes a great urban carbine or home-defense weapon, despite its heavy barrel. The lower receiver could use a few upgrades, but most shooters will be perfectly happy with the supplied furniture which has the added bonus of reducing the cost of the rifle as well. If you can’t decide between a target rifle and a practical carbine, don’t. Simply pick up CMMG’s Mk4 HT chambered in 5.56x45MM.