Cocked and locked, the only way to carry a 1911

I love M1911s, Hi-Powers, CZ-75s and basically any gun that lets me carry it in condition one — “cocked and locked” (and ready to rock!).

Plenty of people tell me they don’t need a round chambered. They carry Israeli style (chamber empty, safety off) and rack the action when they need the gun. Not only is this irrefutably slower, but also breeds dangerous habits and complacency by instilling the belief that your gun is always unloaded.

Some folks carry their 1911s in a strange cross between condition zero and condition one, where they have a round chambered, but the hammer down — bad idea. If you carry in this manner you are needlessly risking your life and the lives of those around you. The 1911’s hammer is too easy to lose control of while lowering.

Assuming you followed the four cardinal safety rules of firearms, best case scenario you’ve just lost a bit of your hearing and pride. Worst, you’ve just put a very big hole in an innocent bystander. Ironically, a 1911 dropped on a lowered hammer with a round chambered has a chance, albeit a small one, to fire. So much for that peace of mind, chalk it up as another reason to carry cocked and locked. 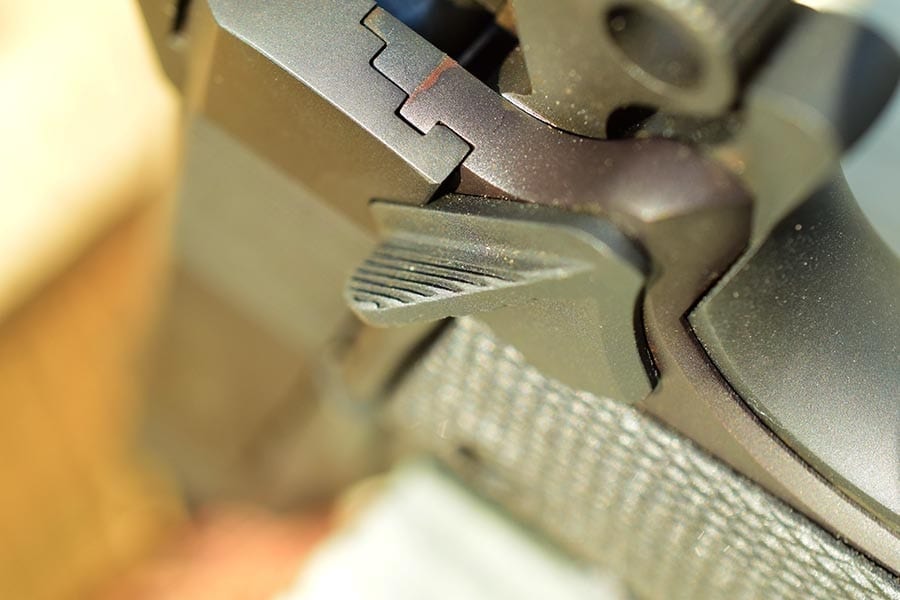 The thumb safety also acts as a thumb rest. A good habit if you like shooting fast and accurate (Photo by Jim Grant)

Now let’s talk pragmatics. With adrenaline pumping through their veins, one of the first things that people lose is their ability to perform fine motor-skills. Imagine Michael J Fox had to use a gun to defend himself, do you think he would find cocking the hammer easier than sweeping the 1911’s generously-sized thumb safety?

Truth be told, Mr. Fox should probably steer clear of firearms, but if he absolutely had to carry one, he should carry it in a modified condition three, no round in the chamber and safety off. If you don’t have Parkinson’s or some other motor skill-ruining disability, this is poor method of carry.

One of the greatest advantages of the 1911 platform is its wonderful trigger and ergonomics. Carrying your 1911 with an empty chamber adds precious seconds to your draw time that can mean the difference between life and death in armed confrontation. An added bonus of  having your 1911 always chambered, is that it cements the first rule of firearms safety into your mind better than Eddie Eagle ever could. 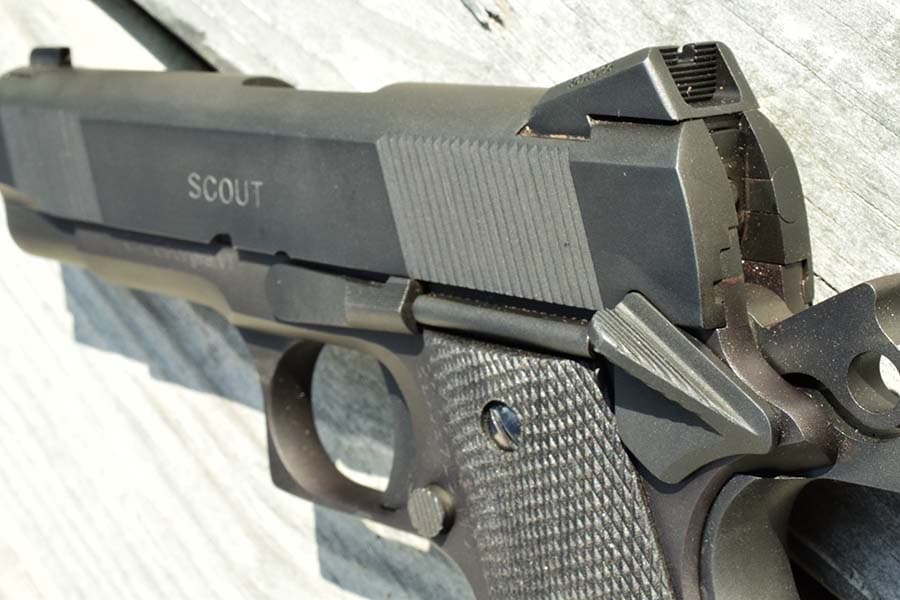 Novak sights, combat hammer, and a convenient thumb safety, is there anything better? (Photo by Jim Grant)

I have carried my backup gun, a Smith & Wesson 442 snub-nosed revolver that has no external safety, for a number of years. Therefore, I subconsciously treat every gun like it is loaded and chambered with the safety off. I treat them all this way regardless, but having the majority of my weapon experience with an always-hot weapon mentally reinforces good habits.

The only accidental discharge I’ve ever had was with a friend’s SKS at the gun range. Its firing pin was caked in cosmoline and the weapon discharged as soon as the bolt closed. Thankfully, since I had followed every safety rule, the fact that the gun slam-fired on the first shot, didn’t matter. The round traveled harmlessly into the berm 75 yards away. On the streets you will not have this luxury, you are responsible for every round that leaves your weapon. Ponder that while you imagine yourself, dripping with sweat, hands shaking from the adrenal dump, trying to carefully lower your hammer on a chambered round. Makes me nervous just thinking about it.

People worried about carrying their 1911 with the safety on, fearing in the heat of battle they’ll neglect to take it off, need to better understand the benefits of training and practice. While there is certainly a chance that a shooter under great stress will forget to take their pistol off safe. This chance can be marginalized by training, both at home and the range, with the pistol in condition one.

Every time you shoot at the range, assuming they allow it, load your pistol, chamber a round, put the safety on and holster the weapon. Slowly and deliberately draw your pistol concentrating on keeping your finger off the trigger. Once the pistol is at chest height and away from your body, with your finger off the trigger,  sweep the safety off as you raise the pistol’s sights into alignment. Once you are sure of your target and what lies beyond, place your finger on the trigger and slowly squeeze the trigger. Fire a few rounds, re-engage the safety and re-holster. Rinse and repeat a dozen times, every time you go the range. Make, “disengaging the safety” part of your draw.

Do this as home with a gun that you have verified is empty, in a room with no ammunition of any type and in a safe direction. Repeat a few times a week at a time dedicated to it. Soon it will become second nature.

The 1911 pistol, while dated, is an incredibly capable lead-delivery system, that despite 100 years of technological advancement still manages to hold its own and attract shooters of all ages with its excellent ergonomics. These ergonomics come at the cost of having to memorize an extra step in your manual of arms. A shooter came overcome this with dedicated, diligent practice. This makes the 1911 an excellent choice for professionals and enthusiasts, but a poor one for range-shy shooters and novices. If you’re going to carry a 1911 though, be trained, diligent and deliberate. Above all else, carry that classic workhorse the way it was meant to be: cocked and locked in condition one.