Colt Detective Special .38 Review: A Revolver Ahead of its Time

When one says ‘Colt’, the word ‘quality’ typically springs to mind. And some would also say ‘concealed carry’ because for the majority of the 20th century the company had a sturdy grip on that market.

With the Colt Detective Special, Colt set the bar for what a snub-nosed .38 revolver should be.

I like snubbies. I carry a Smith & Wesson J-frame pretty much whenever I’m wearing clothes, either as a backup or just as a low-threat pocket pistol. I consider the J-frame to be nearly perfect as a self-defense handgun.

But in all honesty, Smith & Wesson was a little late to the game with the Centennial (and all subsequent J-frame snubbies). They’d been beat by Colt, who introduced its Detective Special some 25 years earlier. 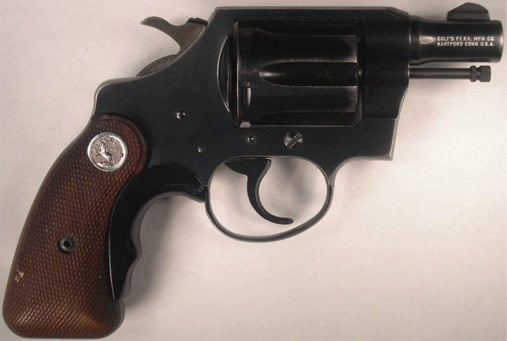 The Detective Special was adapted from their earlier Police Positive. It used the same “D” size frame, which offered six rounds in a swing-out cylinder and was chambered for the .38 Special as well as the .32 S&W Long (with some other variants). Going through four basic versions, the Detective Special was produced from 1927 until 1986, and then again for a few years in the mid 90s.

I’ve shot a number of these guns over the years, though this specific review is based on a late model used in testing the .38 Special cartridge for BallisticsByTheInch.com.

From the very start, the Detective Special became popular with those who needed a self-defense handgun rather than a “duty weapon,” but still in a reliably powerful cartridge. And, yes, it was popular with detectives, but it was also very popular as a back-up gun for many beat cops. Since so many of these guns were made over the decades, they can still be found in good used condition and still serve very well as pocket pistols.

Throughout its 60 years in production, needless to say, Colt had modified its design. The original Detective Special had an all-steel construction with a “square butt” grip. The more familiar “round butt” was introduced in 1933, and the version with an ejector-rod shroud was introduced in 1973.

The “Cobra” version was introduced in 1950 and featured an aluminum-alloy frame, which cut the weight of the gun from 21 ounces to 15. Lastly, a slightly lower quality version of the Cobra called the “Agent” was available from the early 60s through the 1970s. 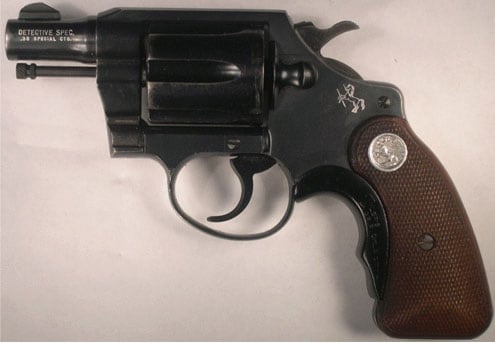 The Detective Special typically had a two-inch barrel (though a model with a three-inch barrel was also available). They were reliably accurate out to 25 yards in the hands of a competent user, and even a novice could use the gun effectively at close range. Typical of most revolvers, there was no external safety—you just had to point and click.

The trigger on all of the different Detective Specials I’ve shot have been quite good, both in single and double action. Less used guns may have a bit of “staging” but it tends to smooth out over time. The front sight was initially a simple half-moon, eventually evolving into a ramp and the rear sight was just a simple notch.

They were very well made, robust, with good to excellent fit and finish. The finish on the guns was either bluing or nickel plate early on, with a stainless steel version later. The grips were usually walnut, though there were periods when both plastic and rubber were standard. Since there were so many of these guns made over such a long period of time, there were a lot of custom grips and other accessories available.

One of the more common concerns that comes up about the Detective Special is whether the gun is suited for modern +P ammo. If this is something you worry about, just use non-+P ammo at all times—there are good options out there even for self-defense purposes.

Realistically, I’d say any Detective Special from the 1960s on should be able to handle at least occasional +P loads without a problem. Certainly, any of the models that have the ejector-rod shroud (the ones introduced in 1973) should be suitable for +P loads. Recoil with +P ammo isn’t too bad, given the weight of the all-steel gun, though more problematic for the aluminum-alloy versions.

The Detective Special was a great gun, with typical Colt quality, and considered by many to be one of the best snubbies made. If you get a chance to pick one up it is worth considering.

They’re a little bigger than the J-frame guns from Smith & Wesson, but you do get a sixth round available as a trade-off. It’s a classic and in many ways it’s a shame that they’re not being made any more.

Depending on condition the Colt Detective can sell anywhere from $300 to more than $1000.