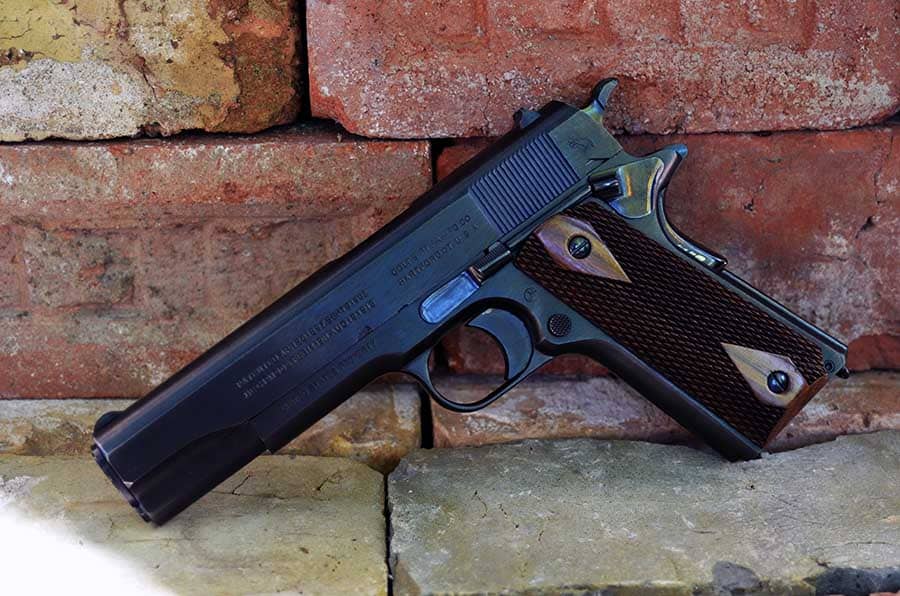 Nostalgia is a wonderful thing, but in the case of buying guns gets prohibitively expensive. Especially for shooters looking for a nice example of a first World War Colt 1911 they can shoot. Fortunately, Colt has come to the rescue re-releasing some of their older models. One of the nicer ones is the O1918 World War I reproduction.

Introduced as a limited run of 4,000 guns in 2007, the Colt O1918 is a faithful reproduction of the 1911 “Black Army” pistol that features a black oxide finish instead of the high-polish Carbonia bluing of early M1911s. These pistols ship in a blue cardboard Colt presentation box that reveals an issue-style brown Kraft box containing the pistol, two seven-round magazines a “child safety” lock and a copy of the original Colt 1911 operator’s manual. 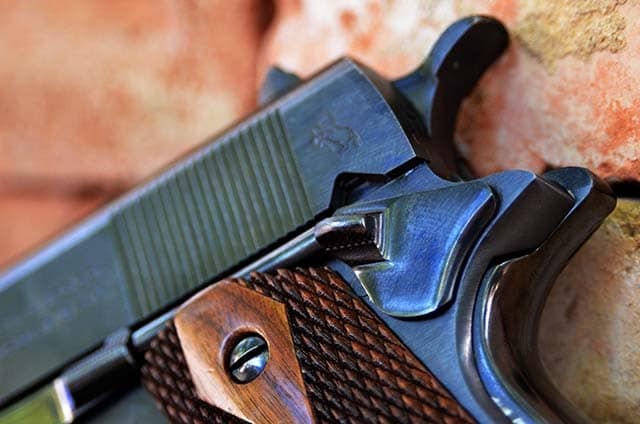 The controls of the Colt O1918 are very well executed, and the wide spur hammer and short grip safety are just like the originals – they can bite the unwary! (Photo: Kenny Hatten)

The serial numbers feature a “WWI” suffix that differentiates them from original guns, and a replica Ordnance Department approval stamp on the left side of the frame behind the trigger. The stamping features the stylized initials of Major John M. Gilbert, U.S. Army Inspector of Ordnance from August 10, 1917 to March 29, 1918. The slide is nicely finished with the old style Colt roll mark, and the “U.S. Army property” markings are all nice, crisp and in their proper locations. The grips are checkered “double diamond” pattern walnut, and look very nice right out of the box. The checkering is quite sharp and well-defined, and they fill the hand very well.

The O1918 is a close copy of the basic pre-Series 70 Colt 1911, with its lack of firing pin locking plunger recess in the slide or safety activation linkages in the frame. Although there are a few crucial differences like the Series 80-style firing pin and linkages. Finished in the same black oxide bluing as the rest of the pistol, they are functionally indistinguishable from originals. However, the O1918 has no cutouts for the slide-mounted firing pin safety plunger or safety linkages in the frame. Additionally, the frame and slide are fully heat treated, unlike many early original guns. While not period-correct, this is crucial to insure the pistol will stand up to plenty of shooting like modern M1911s. 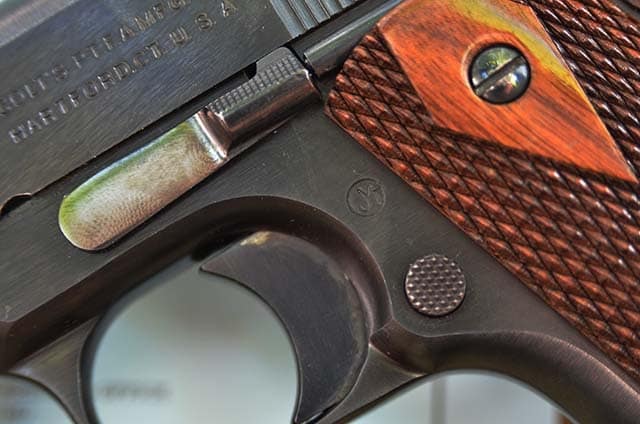 The attention to detail is evident in the Colt O1918, as evidenced by the neat, crisp Ordnance Department inspector’s marking and other distinctive features. (Photo: Kenny Hatten)

The controls are functionally and visually correct. Unlike later models the O1918 includes a wide-spur checkered hammer, checkered slide release and small-profile thumb safety. Operation of the safety is crisp and positive, which speaks of the level of care and attention to detail of these fine guns.

The sights are as authentic as the rest of the pistol, which is to say that they are quite small and very basic, but they are actually just a bit bigger than the ones I’ve seen on original pistols. While the front sight is small compared to the wider blades on modern pistols, it’s nicely fitted and the edges are all crisp and clean. This makes for an acceptable sight picture despite the small size, though it isn’t as quick as modern offerings. Small sights notwithstanding,  shooters who take their time and concentrate on getting a good sight picture will find this pistol does not disappoint. Despite its retro appearance, the Colt O1918 is is every bit as accurate as a modern M1911. 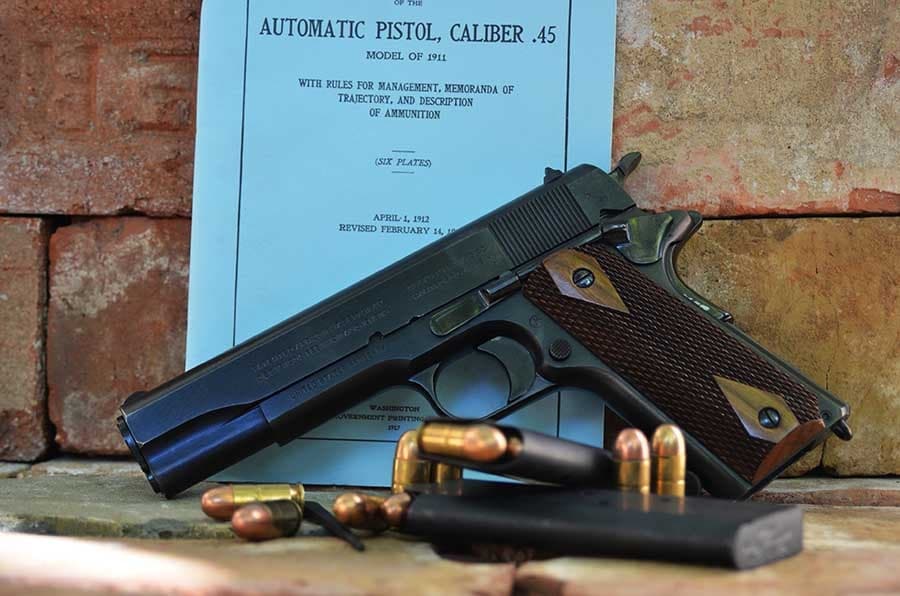 The Colt O1918 with accessories and ammunition. The walnut Double Diamond grips are nicely checkered and sharp. (Photo: Kenny Hatten)

Surprisingly, the O1918 showed no inclination to choke on any brand or type of ammo, no matter how cheap or old. It functioned just fine on ball and hollow points, and delivered more than acceptable accuracy for a pistol with such rudimentary sights and the famous “Colt rattle.” Just for fun, I ran a couple of magazines of dirty, tarnished World War II dated ball ammunition through it, and it ate the stuff right up. 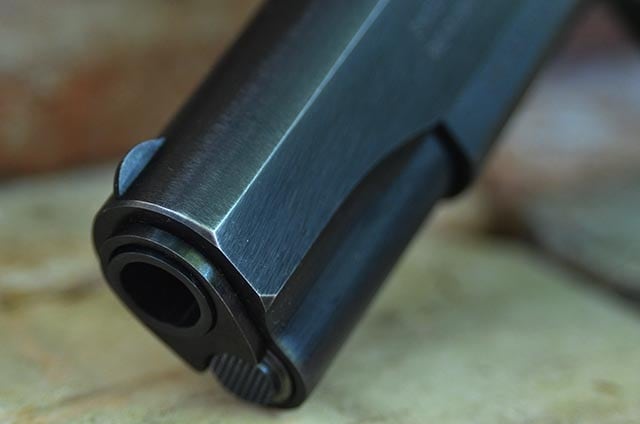 The small front sight is pretty authentic for this pistol, but don’t let that fool you, this pistol is a shooter! (Photo: Kenny Hatten)

I had been warned beforehand about these pistols’ tendency to “bite” the hand of the shooter. This is due to the combination of short-tanged grip safety and extra-long hammer spur. I don’t have meaty hands, but after a few magazines downrange, I did notice a small mark in the web of my hand that looked like the indention of a fingernail. That was about as much “hammer bite” as I ever got out of it. although the hammer never hit hard enough to break the skin. Shooters with beefier mits may find this isn’t the case for them.

For reenactors, collectors or shooters who are big fans of old school 1911s, the Colt O1918 is a  blast from the past they can take to the range and shoot. With the value of nice original Colt 1911s getting further past the $3,000 mark, these genuine Colt reproductions are a real bargain. Despite being discontinued, can still be found on Gunbroker.com and other sites for around $900 to $1500.

With no rails, laser, tritium sights or other modern enhancements, these pistols are still solid workhorses that live up to the legend that has lasted more than a hundred years and counting. Authentically made, surprisingly accurate and a pleasure to shoot, the Colt O1918 is worthy of the legend.