Colt Paterson reproduction by Pietta is a worthwhile experience

The Paterson was the first percussion revolver. Colt produced them from 1836 to 1842 and today originals are considered, though hard to come by, valuable, so if you ever get your hands on one you probably won’t get a chance to shoot it. Fortunately we don’t have to shell out the big bucks to shoot one.  F. LLI PIETTA makes a great quality reproduction Paterson.

When Sam Colt introduced the Paterson, most firearms were single shot muzzle loaders—and flintlocks at that.  It was in the 1830’s that the percussion cap became prevalent.  It was this innovation that made guns like the Paterson possible.

The Paterson is a five-shot revolver that was made in .28 and .36 calibers. They had a variety of barrel lengths and were single action.  The Paterson design did not have a trigger guard, and instead used a folding trigger.  And the early models had to be broken down to load and then loaded with a tool.

F. Lli Pietta, an Italian company located in Brescia, Italy, produces a very accurate reproduction of the original Paterson. The review model is called “The Texas Paterson” and features a 9-inch barrel, folding trigger and no loading lever just like the originals.

The blued finish is deep and lustrous, it truly is beautiful.  The walnut grips fit well (the originals had walnut, ivory or ebony grips). The sights use a shallow V cut into the top of the hammer and a small brass bead front sight.  The Pietta comes with a copy of the loading tool, but very careful not to lose it.  They are hard to find and expensive to replace!

Pietta has about 50 years experience producing black powder and cartridge rifles and pistols. Dixie Gun Works and Cabela’s both carry the Pietta Paterson in the U.S.  They sell for about $530. Dixie gun works also carries replacement parts and accessories for the Paterson, if you ever need them.

The Paterson design is a pain-in-the-ass to load.  Since it does not have a loading lever on the gun or a cut out to make capping the nipples easy, you have to take it apart. Here are the steps it takes to load one:

1. Push the wedge pin out—might take a couple of light taps with a hammer 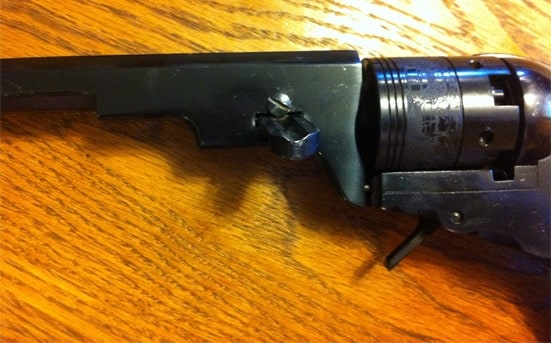 2. Remove the barrel—simply pull it forward 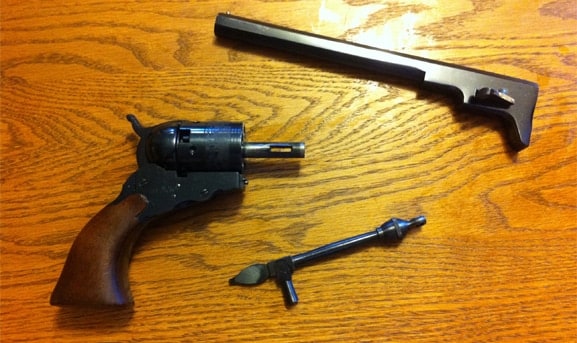 4. Seat the balls—using the tool in the slot in the cylinder pin 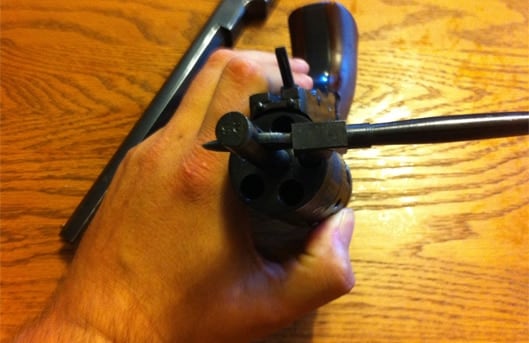 6. Remove the cylinder and cap the nipples—remember you now have a primed and loaded weapon! 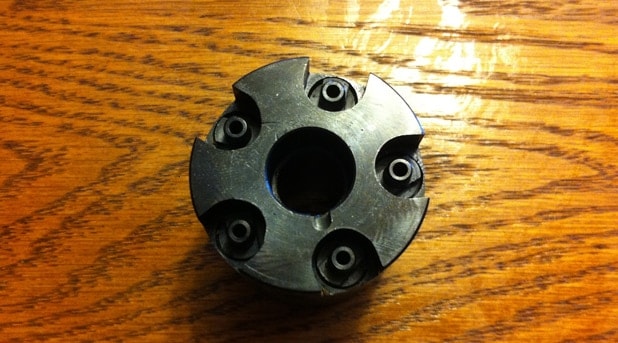 7. Reassemble the gun—be extra careful doing this and Mind the muzzle!

A note on when to cap the nipples: if you can find a small, straight line capper that will fit, use it.  It is safer than assembling the gun with the caps in place.

Now you are ready to fire the Paterson.  Enjoy your 5 shots.  Take plenty of time. Squeeze them off slowly (*Remember how much fun it was to load*).

The Paterson, especially one with the 9-inch barrel, is an accurate handgun.  I have gotten some 1.5 inch groups at 40 feet. The recoil is very mild.  The muzzle energy is comparable with a .380 auto.  When it was designed a lot of firearms were still smoothbores.  The Paterson is rifled, Sam Colt wanted his gun to be accurate and it is.

The Paterson is a little awkward to handle.  When you go to cock it there is not a good place to rest your trigger finger because, again, the Paterson doesn’t have a trigger guard.  This also makes it hard to cock one handed. It is easier and safer to use your off hand to roll the hammer back.

Other than the above loading issues there are some problems with the Paterson design.  These are not just issues with the reproduction—the originals have them as well.

There is not a forcing cone on the breach of the barrel, it is flat.  This can cause a buildup of fouling on the cylinder pin from the black powder.  Sometimes this is not a problem though. Just wipe it off when you reload.  It can bind the pistol up before you have fired all five rounds though.  I have found two ways to remedy this.

First, make sure the barrel has a little gap between it and the cylinder, about a playing cards width.

Second, spray the cylinder pin with nonstick cooking spray.  It keeps the fouling from sticking to the pin and makes it easier to clean.

I hope I didn’t scare you away from the Pietta Paterson.  It does have some issues, but they’re the same issues the original had.  These were later corrected with the Colt Walker and Dragoon models.  But the Paterson is where it all started.  It is the first. It is history in your hands. That alone makes it a worthwhile experience and the reproduction for Pietta is a great place to get it.