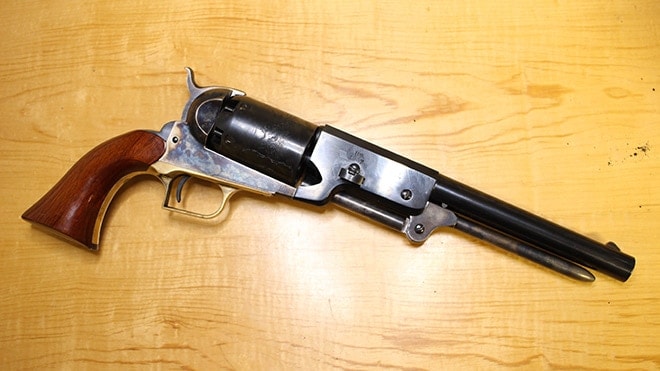 By the New Year of 1847, the United States and Mexico had been entangled in a war for nine months. Visions of Manifest Destiny were pushing the American Empire closer and closer to the Pacific Ocean, and the new conflict had provided the opportunity for the final push.  It also opened the door of opportunity for a young and charismatic inventor, Samuel Colt.

At the time of the Mexican-American War, Samuel Colt had been out of the firearms business for several years.  His innovative design of a repeating firearm, called the Paterson, was capable of delivering multiple shots without reloading in both long arms and belt-sized pistols.  This design was brilliant.

However the Paterson’s complexity due to the number of parts along with some of these parts being small made the firearm fragile.  Early versions of the pistol required the gun to be field stripped in order to load — a time consuming process.  It’s small caliber and relatively small size also made the gun rather anemic compared to larger, single shot pistols of the era.  These things taken into consideration, the gun was unpopular.  Despite its general unpopularity, there was one group who swore by the guns effectiveness in firepower: the Texas Rangers.

Samuel Walker was a young Texas Ranger who, along with his fellow Rangers, had seen and used the Paterson and swore by it.  When the Mexican-American War broke out, Walker, who was now Captain in the United States Mounted Rifles, wanted his men equipped with two of Colt’s revolvers per man.  He contacted Colt in late 1846 to obtain these revolvers; however he wished to see improvements.

The .36 caliber projectile used by the Paterson was underpowered and Walker asked that the new revolvers be made 50 rounds to the pound, or .44 caliber, and hold six shots instead of the five of the Paterson.  He also required that the new revolvers be capable of firing an elongated ball, later known as a Picket conical, 32 to the pound which equaled 218 grains.  These improvements would produce a handgun capable of bringing down a man or horse at distances of 100 yards, twice the range of the Paterson.  He also required a fixed trigger with guard unlike the Paterson’s folding trigger design. 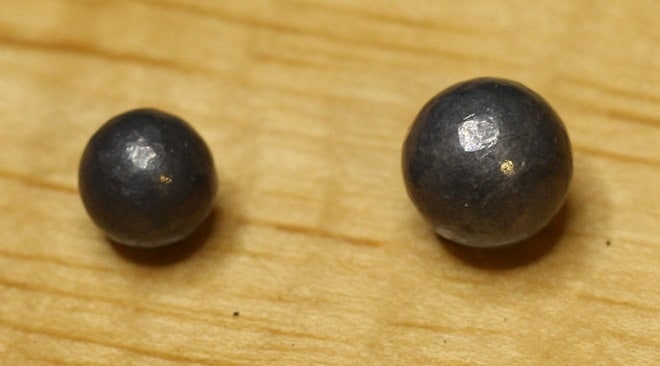 Colt was happy to take on the project.  Making arrangements with Eli Whitney Jr. to assemble the new revolvers at the Whitneyville Factory, Colt was able to secure a government contract on January 4th, 1847.  The revolvers would be purchased by the government for $25 each, with the first 100 delivered in three months.  Colt christened the new firearm the “Walker,” named after Samuel Walker.

In order to meet the deadline, Colt contracted the firm of Slate and Brown to produce the cylinders and barrels, and William Ball to produce the cones (known today as the nipple).  The frames were to be made and assembled at the Whitneyville Factory.  Working around the clock, Colt finally notified the government that the first 220 revolvers were ready for inspection on June 7, 1846.  On July 28, 1846, Colt sent Walker his own personal pair of revolvers.

Only 1100 Walkers were produced in 1847, the extra hundred to be presented as gifts and sold on the civilian market.  While Samuel Walker had promised Colt to secure contracts for several more thousand revolvers, there were failings that had to be addressed.

Colt’s first revolver, the Paterson, left, had a folding trigger design that dropped when cocked. The Walker, right, had a fixed trigger with guard. (Photo: Jon Frazier)

Close to a third of the revolvers burst during use in the field.  There are many theories as to why this had happened, ranging from poor metallurgy to improper loading by soldiers.  Colt recommended the gun only be loaded with 50 grains of fine black powder.  The cylinder, which had been elongated to accommodate the new conical bullet, could hold more than the recommended charge.  It has been said that soldiers in the field quickly discovered that the gun could be loaded with 60 grains of powder if the bullet were loaded backwards.  This exceeded the 50 grain charge recommended by Colt, and may have been a leading cause of failures.

Colt would take note of this and make adjustments in his later models, know today as the Dragoon series.

The Walker revolver, despite its failings, was a huge success for Colt.  In late 1847 he would establish his factory in New Haven, Connecticut.  He would go on to design firearms well into the Civil War with his last design in 1862, the year of his death.  His legacy would outlive him, with the Colt factory producing firearms to the present day.  The legacy of the Walker is carried on as well, with replicas true to the original design being produced by Uberti in Italy.