Special: Battle of the Storms: The Beretta PX4 subcompact, compact and full-size pistols

When I went to tour the Beretta factory in Maryland, I got to shoot at the Beretta range—a narrow 100 yard tube of concrete built beneath the factory floor. Although they let me shoot numerous guns, the highlight for me was the Beretta PX4 Storm.

I’ve shot PX4s before—and I have another on the way for a complete review—but this shoot allowed me to do something that I’ve never done: shoot all three sizes, all in the same caliber, one after another.

The result felt kind of like a gunned up version of Goldilocks and the three PX4s.  As each was chambered for 9mm, I got an unsurpassed comparison of the performance of each gun. 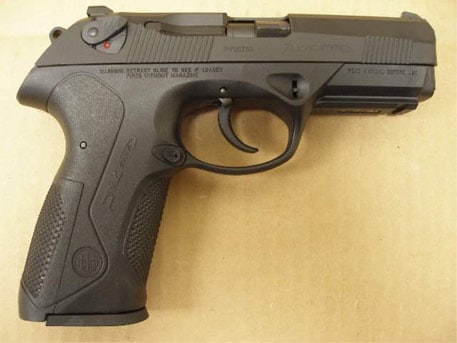 Beretta says the “Px4 Storm pistol is the most advanced expression of technological and aesthetic features in a semiautomatic sidearm.”

The fiberglass reinforced polymer frames cut down on weight.  Each of the models has an accessory rail and incorporates a “visible Automatic Firing Pin Block” that blocks the firing pin until the trigger is pulled completely.

The external safety is ambidextrous and acts as a decocker, the hammer is external and the grip back straps are interchangeable to accommodate different hand sizes.

While these features are nice, I find the rotating barrel system the most compelling.  I first saw a rotating barrel on a Beretta Cougar in .45 ACP, way back in the late 1990s.

The way it works is anything but simple.  Most semiautomatic pistols have a tilting barrel system.  The recoil energy drives the slide backwards and tips the barrel up.  The result is muzzle flip.  The rearward travel of the slide and the upward movement (however slight) is compounded by the low fulcrum of the shooter’s wrist and the barrel jumps up.

But a rotating barrel doesn’t tip up.  It still has a slight rearward travel and your wrist is still where it always is.  So the gun will still kick up—but the difference is noticeable.

If I were looking for a duty pistol, this might well be my choice.  I liked the performance of the pistol.  It feels so much like my 92FS and with that I had no learning curve.

As the laws of physics would dictate, the full-size PX4 had the least felt recoil than the Compact.

The Compact PX4 is smaller, but not by much.  The Full-Size is just a touch over 7.5 inches.  The Compact comes in a touch under seven.  There is less than an inch of difference in their barrel lengths.  The differences, in fact, seemed so subtle that I had to remind myself which one I was holding.

Yet, I shot much batter with the Compact.  The weight of the pistol, the size, everything was right.

The Subcompact PX4 is a big change.  The noticeable difference is muzzle flip.  This is the only PX4 that doesn’t incorporate the rotary barrel system and, because of this, the subcompact is jumpy.

And it doesn’t feel like a subcompact.  It is just as wide as the others—nearly 1.5 inches. This makes for a short, fat pistol.

If I carried a full-sized PX4 in the line of duty, I might consider a subcompact as a backup.  Otherwise, no.  There are a lot of other pistols, including the Nano, that I prefer.

I’m a self-trained shooter.  I learned most of what I know shooting the 92FS.  That pistol has a vertical, textured front trigger guard.  While I grip the pistol with my right hand, I wrap my left up, a bit high, and secure the grip with my left pointer finger on the trigger guard.  While it isn’t the best technique, it isn’t the worst, but the grip works for me on the 92FS.  Not so much on the PX4 though, which has a rounded, smooth trigger guard.  I wrapped up as I am wont to do, but I was pulling shots low and left.

For me, the Compact PX4 is the ideal tactical pistol.  I don’t say that lightly.  I still love my 1911 and I will always have respect for the 92FS, but the PX4 has pushed it out of the 9mm top spot.

After I’d blown through all of the Berettas I could have ever wanted to shoot, I went back to the Compact PX4.  Of all the mixes of steel and polymer, the veritable buffet of black guns, it was the Compact PX4 that I wanted to take home.