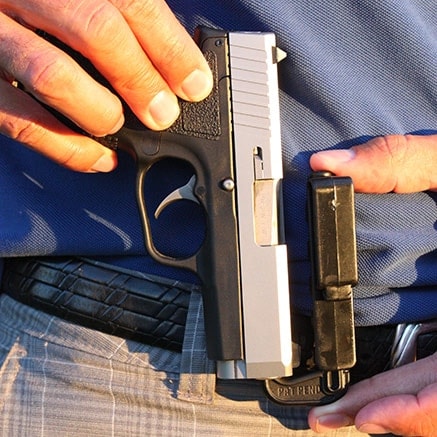 The firearms industry is now in the hangover phase of its 2015 SHOT Show sugar high, and with good cause—there are more innovations in guns and gear hitting the market than ever.  The military, law enforcement or civilian customer of today has literally hundreds of more choices in most product lines than even five years ago.

It’s no surprise that, given the explosive growth of the firearms market, especially its concealed-carry segment, the occasional product makes its way to retail that is less than desirable or downright bad-—“bad” as in the Huey Lewis song, not as in the Michael Jackson song. (For readers who missed the 80s, hang in there, the point is close at hand.)

Enter the Zero Carry concealment holster. This device is shaped a bit like a paper clip and is designed to slide into the barrel (which it’s “guaranteed” not to damage) of a handgun, with the other half threading over the wearer’s waistband.  The advertising for this product claims it’s the “lowest profile” concealment holster available. 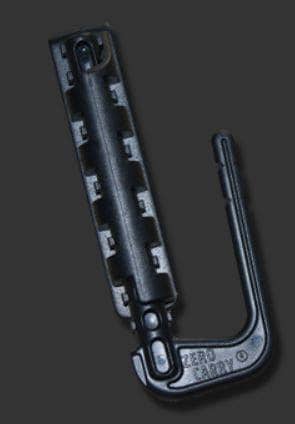 To the manufacturer’s credit, their website features a lengthy list of safety warnings for its product, which costs $26.45 including shipping. The list admonishes the user to not carry in cocked-and-locked configuration, to avoid unintentional cocking of the gun, and not to carry with a loaded chamber.  It reminds users to engage safety mechanisms, to avoid entangling clothing in the gun or holster, and not to tuck clothing between pants and gun, or vice versa.  An email from the company confirms their stern advice about an empty chamber, and they encourage shooters to receive training from a qualified instructor.

The person choosing this product must be someone who doesn’t mind gun-to-skin contact, nor the corrosion that sweat will inevitably inflict on the weapon’s finish after extended use.  Above all, the user must be disciplined enough to never carry with a loaded chamber, and skilled enough to chamber a round and use their gun effectively in the five seconds many experts say a deadly force encounter takes from beginning to end.  To the 1911 aficionado, advice from a holster company to not carry in cocked/locked configuration, which generations of shooters have proven as safe and effective in any normal holster, should raise suspicion. Of course, there are some logical reasons for carrying a semi-auto with an empty chamber.  This article isn’t about that. 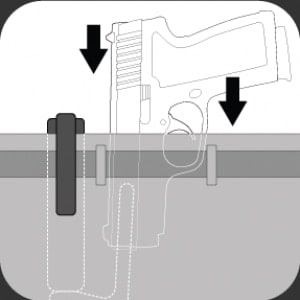 Unlike the similarly designed Versacarry holsters, Zero Carry holsters lack a trigger guard which could present a safety concern.

The critical and necessary feature the Zero Carry holster doesn’t have is anything covering the trigger guard.  There is “zero” protection from accidental (or now that you’ve read this or previously understood the principles using of a holster, negligent) discharge. The inevitable accidents associated with its use will likely tarnish the image and serve to erode the rights of gun owners, as anti-gun sectors use this product’s shortcomings—and users’ lack of attention to detail—exclaim that normal folks are incapable of safe gun handling and therefore shouldn’t be allowed to have them.

On the other hand, it can be hazardous or worse for users who do follow the manufacturer’s advice to carry empty, yet fail to prepare for that critical moment in which drawing, loading, and shooting accurately are necessary in short order. This product is, in this writer’s assessment, dangerous. The bottom line is, concealed or otherwise, use a holster that covers the trigger guard.

There are many great things about a free market. One is the consumer’s ability to use personal judgment in selecting products that will serve them well and safely.  The Zero Carry holster can’t offer both at the same time.

Safety warning: Eve Flanigan is a New Mexico-licensed concealed carry instructor. Any information described in her articles is intended to be put into practice only by serious gun-owners with proper training.