At the risk of seeming to be obsessed with the .460 Rowland cartridge, given that I have written about it three times this year, allow me to give a report on what it is actually like to convert a Generation 3 Glock 21 over to .460 Rowland using a conversion kit from 460Rowland.com.

One of my Ballistics By The Inch buddies had a Glock 21 9/11 Commemorative model, and was anxious to try the conversion kit. He ordered it in, got it in good time, and we got together to give it a try.

First thing we did was field strip the Glock and check everything over. The gun has been shot, but not a lot. Everything with it looked fine.

We went ahead and set up a single chrono, just so we could get some numbers for comparison. This wasn’t the usual more formal BBTI set-up, but we figured it would suffice. 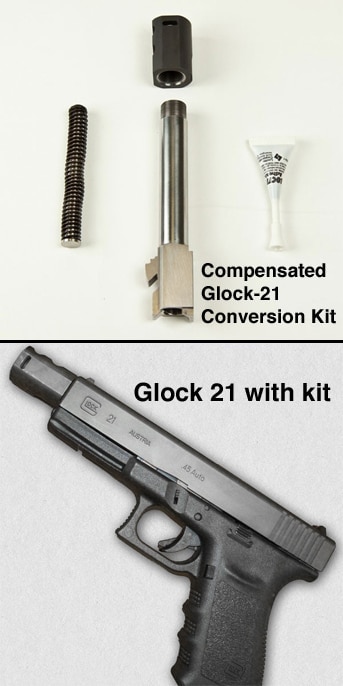 Using the original .45 ACP hardware in the Glock, we shot some standard 230-grain ball ammo. It gave us readings in the expected range: about 780 fps. Then we ran some premium self-defense ammo, Cor-Bon 230 grain +P JHPs, and again got performance in the range expected: about 980 fps. Satisfied that the Glock was performing normally, we turned to the conversion kit.

The current kit shown on the site now also has a small packet of what looks like blue loc-tite and runs for $319.

The instructions indicate that you’re supposed to secure the compensator with loc-tite, so my buddy brought some along. This is probably why they now include a small packet of it with the kit.

If you’re familiar with Glocks, you know that field-stripping the gun is simplicity itself. We did so, and removed the original spring assembly and barrel.

Then we checked to make sure the new parts looked like they would fit. Everything seemed fine in comparison to the original parts. We installed the new barrel, then the new recoil spring assembly. Close examination seemed to indicate everything was where it needed to be.

We re-assembled the slide to the frame. Again, everything seemed to be fine. Manually cycling the gun, there was little or no noticeable difference.

We decided to go ahead and try the gun at that point, before mounting the compensator, just to get a feel for it. This is not recommended, but we wanted to be thorough in our test, as informal as it was.

The .460 Rowland ammo we had was the same as we had tested previously for BBTI, and what started me on this kick: Cor-Bon 230 grain ‘Hunter’ JHP.

Initial shots were about 1170 fps. Just about what I expected. The recoil was stout, and there was some muzzle flip, but neither was particularly bad. We proceeded to mount the compensator that came with the kit. The compensator just screws onto the threaded portion of the extended barrel. You screw it down until it is almost to the front of the slide, with the compensation holes facing straight up. Then back it off a couple of turns, add some loc-tite, and reposition the compensator. Allow it to dry sufficiently.

Once it was ready (not completely cured, but sufficient for our needs), we loaded the gun again and ran it through its paces.

Also nice was the way the compensator changed the character of the recoil: it was still stout, but there was significantly less muzzle flip. We all shot the gun through at least a full magazine (13 rounds) and agreed – it was faster and easier to re-acquire your target with the compensator, and the gun took less man-handling to control. The recoil was, as noted, still stout, and felt different than the slow push of shooting a .45 ACP out of the Glock. It was probably closer to shooting a 10mm.

The 460Rowland.com site touts a Nosler 185 grain JHP “carry ammo” and claims that it achieves 1550 fps. I haven’t tested it, but I’d believe it. And if so, you’re talking a whopping 987 foot-pounds of energy out of the thing. That puts it beyond the 10mm. Beyond the .41 Magnum. That puts you pretty solidly into .44 Magnum territory. Even the 230 grain round we tested has a respectable 766 foot-pounds of energy – compared to 526 for the same weight bullet out of a .45 ACP +P.

I said it before and I’ll repeat it here: if you carry a .45, you should instead be carrying a .460 Rowland.