The Kimber Warrior is a highly functional tactical 1911 from a company notorious for quality guns. The Warrior has a built in Picatinny rail, its frame and slide are steel and the match grade barrel is nicely fitted. The gun itself shows the pride of craftsmanship common to the Kimber line.

The Warrior, as the name might suggest, was meant for combat. It’s a production model of a gun that was built for a Marine Corp contract. Unlike the other Kimber Custom pistols, the Warrior doesn’t have an internal firing pin block. This puts it in line with the “series 70” 1911s.

For those 1911 purists who don’t want any of the available safety features gumming up their trigger responsiveness, the Warrior is a good place to start. 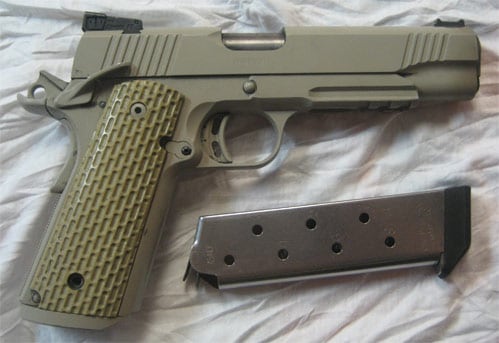 Modification has been popular for years and some say it is the reason for the existence of the high-end 1911 makers. They provide options on their guns that shooters used to have done by gunsmiths.

The potential for customization is at the heart of advertising for companies as diverse as Regent and Springfield, and the web is full of stories about folks working on even the low end of the 1911 spectrum like Rock Islands.

The Custom II line of Kimbers comprises the bulk of the company’s base models, which really makes the word custom a bit meaningless. But a base model Kimber has more features than most 1911’s that retail at or below a thousand dollars.

But this Warrior really has been customized and in almost every imaginable way.

David Robinson, an armorer at the Dominion Shooting Range in Richmond, Virginia, was the original owner of the Warrior. He overhauled the handgun. And this type of customization speaks of Kimber’s innate quality. Like a 1932 Ford. You can put in a new engine, chop it up, paint flames on the side, but it is still a Model A. It’s a hot rod—which is a metaphor that Robinson himself uses to describe the gun.

But this is a Kimber. How much work does it need?

After putting thousands of rounds through the Warrior, Robinson felt like the gun could work better. In a period of about a year, he replaced the trigger, the guide rod, the hammer, the safety, the springs, the sear, and the sights. He polished up the interior and worked on the barrel. The end result “looked like Frankenstein,” so he had the gun Duracoated in “Desert Mint.” When it was all together it looked a lot like the Kimber Desert Warrior. 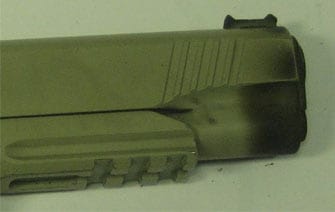 But looks aside, the result is a gun that works exactly as its shooter intended. It did what it was designed (and redesigned) to do. Robinson put an estimated 20,000 rounds through the gun during the build. But he hadn’t lost his desire to customize guns. He wanted to continue working but needed funding to do it, so he sold the Warrior to the range.

And that’s where it faces its ultimate challenges. Wing-nuts like me get to put it through its paces. Constantly. Short of taking it into combat, or having it actually serve as a duty weapon, the Warrior couldn’t ask for a better testing ground than the rental wall at an active range.

How many rounds has this gun fired? Robinson could only guess. Let’s just assume it is a lot. The barrel and at least an inch of the slide end were black with carbon, which tells me it hasn’t been cleaned with any regularity. This soot shows up really clearly against the greenish tan of the Duracoat.

I don’t get much opportunity to shoot fancy fine-tuned guns. My fixation with the 1911 grows out of its century of military service, not from any of the various shooting sports that make use of the pistol. As such, I’m not used to hair triggers on 1911s. My first shot with this gun went through the bulls-eye. Though I can’t be sure, I think my second shot went into the ceiling. If it didn’t go up, it went well above the target. Touchy little thing. 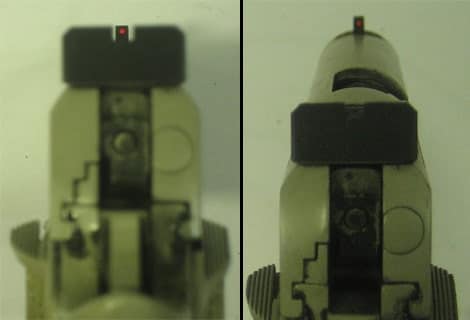 So I backed off of the trigger. Once I was accustomed to the rhythm of the gun, the warrior preformed perfectly. The increased tension from the heavier spring seemed to make things move a bit faster. The mechanical ka-chunk I am accustomed to from most 1911s felt more like a piston stroke. The gun was fast and smooth.

At 25 feet, the Warrior is predictably reliable. If I ran into anything unexpected, it was the light trigger pull and the micro short reset. I have a nasty habit of pointing the gun in the right direction, taking up the slack in the trigger as I aim. I aim while holding the gun by the trigger’s tension. Then I exhale and squeeze. But I had trouble with the Warrior. I pulled up the slack and the gun would go off. I want to be clear here; this was operator error. That was what the gun was designed to do. But I had to concentrate to get it right. 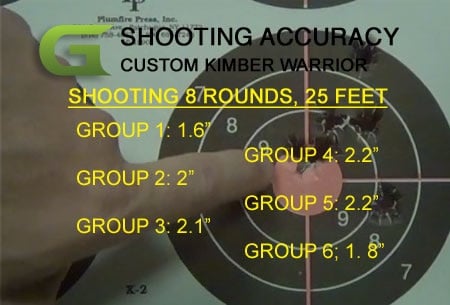 This is easily the nicest 1911 I’ve had the pleasure of shooting. Like I said, I spend most of my time with the pedestrian guns. But this thing really hums. A good deal of this is due to the innate quality of a Kimber. The rest of the credit goes to Robinson, who was willing to monkey with the gun until it ran just exactly like he wanted. And the end result is so dramatically different.

For example, I shot one of the Remington R1 1911s on the same day. I shot it side by side with the Kimber Warrior. While I love them both, and for very different reasons, they are so different. A comparison would end at the look of the guns themselves.