Gun Giveaways Too Good or Too Easy to Pass Up

Here’s a look at December’s gun and ammo giveaways we think are worthwhile. We’ve narrowed the list down to six contests that you should check out because they’re either easy to enter or too good to pass up. We tell you who’s behind it, what to do and how to do it.

First, this is just too good to pass up. To be specific, you win a WASR-10 AK47 rifle, bayonet, hard case, and two 30-round magazines. The WASR is a semi-auto variant of the AK-47 rifle manufactured by Romania. And just like an AK-47 it fires 7.62x39mm and is made of stamped steel, wood and all held together with sweet Soviet reliability.

The contest is sponsored by Atlantic Arms, a Texas online gun store, and is promoted by ArmsList.com, an online classifieds for guns.

To enter, you have to open up an account with Armslist, agree to the terms of the promotion, and then copy the promotional link and spread it via email, Facebook, Twitter, etc. The link is unique for each participant, so Armslist can monitor who’s coming into their site by what link. Records are kept and posted on the site too, so you know if you’re in the lead or not. The participant with the most points wins, however, a random participant will also be awarded $50 worth of ammo.

It’s a nice package, but a lot of work. So you have to be really dedicated to win. If you don’t, you still have a chance to win some ammo. Deadline is Dec. 25. 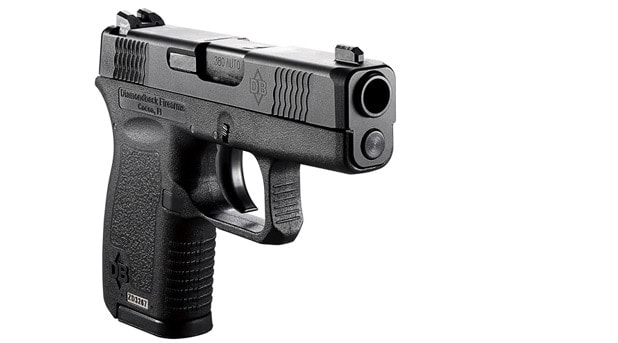 I like this gun. Chris Callahan likes this gun. If you don’t know about Diamondback you should. The company has been around for a number of years, but they’ve only been in the gun market since 2009. The DB380 was the company’s first design. It’s a pocket pistol chambered in .380. It has a solid construction, a sleek look, and at half a pound in weight and three-quarters of an inch in thickness, it’s easy to conceal. It’s valued at $430.

It’s being given away by Weapon-Blog.com, a firearm news and contest aggregation site. To enter you have to sign up and take the DB Gun Safety course. It covers basic safety rules and practices such as treat every gun as if it were loaded, never point a gun at anything you don’t intend to shoot, etc. Once you’ve completed the course you email the certificate to bkeally@nc.rr.com. And then they’ll pick a winner at random.

The end result of this contest is pretty awesome and the registration isn’t that bad. Though the course is a bit long, it is helpful. In the end, it promotes a thoughtful and positive message. Deadline is Dec. 20. The P226 is a sweet piece of steel in a full size 9mm pistol. It’s identical to the sidearm issued to Navy SEALS. The MK25 features SIG night sights, anti-corrosion coated controls and an anchor emblem engraved on the side. It has basic pistol controls such as double/single-action trigger, manual safety, and a Picatinny under barrel rail. However, it’s designed to operate in rough and wet conditions. It’s valued at $1142.

SIG Sauer gives away something every month and this is their December giveaway. To enter, you just sign up. You fill out your contact information and then wait until they pick a winner.

This contest is easy enough. SIG won’t spam you or anything like that. Occasionally they’ll send you promotional and contest information. Deadline is Dec. 31.

This is a replica of the famous Colt revolver also known as “The Peacemaker”. It was one of the first revolvers to be mass produced, but what really made it popular was the fact that it shared the same cartridge with “the gun that won the west,” the Winchester 1873. With a 7.5-inch barrel, it is a large revolver. It has a nickel finish and it’s chambered for .32-20 Winchester. It’s valued at $1490.

FreeGunStuff.com is giving away this handsome gun. Besides hosting contests, FreeGunStuff also hosts its sponsors’ sales. To be in the running you have to enter all your contact information, which will not only enter you to win the Peacemaker, but it will also sign you up to get promotional information and other contest notifications.

This contest is both easy to enter and I’m pretty sure most shooters would love a chance to shoot a Peacemaker. The deadline is Dec. 31.

The Trophy Hunter XP is a new Savage rifle. It was released at the beginning of November. It’s actually a rifle and scope combo. The rifle is what you expect from Savage—dependable, accurate and well constructed—and the scope is a 3-9×40 Nikon BDC scope. It’s valued at around $500.

Although it is a Savage Arms competition, it is being administered by Chasing Trophy Whitetails, LLC, a social media company out of Columbia, SC, that specializes in promoting outdoors sporting goods companies.

It is easy enough to enter initially and I’m sure you can surreptitiously allure Facebook friends into liking it as well, or you may alienate them. Chasing Trophy White has also stated that they won’t spam you, so you might as well seek this contest out and place that initial “Like”. Deadline is Dec. 30. 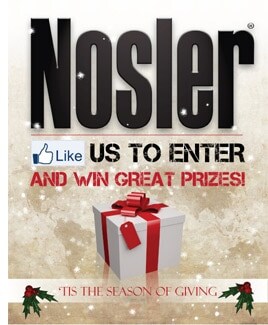 Every week this month Nosler is giving away a case (10 boxes) of Trophy Grade Ammunition. One week it’ll be .223, another week it’ll be .22-250, then .308 and then 1,000 Varmageddon bullets. Each contestant will also be entered to win the grand prize – a $500 Nosler Gift Certificate.

The Trophy Grade is, well, Trophy Grade – high quality ammo. And the Varmageddon bullets are Nosler’s newest creation. Varmageddon bullets have a unique jacket construction. They’re made of a copper alloy and are stout and thick at the base. The tip tapers to a paper-thin point, too. This gives the bullet the durability it needs to fly fast without tearing apart, while still ensuring good expansion at close and long ranges on small targets.

The contest is simple: “Like” Nosler on Facebook and the winners will be randomly selected. This promotion ends Dec. 31.

Well, that’s it. I hope you enjoyed it. If you know of anymore giveaways we should be aware of, let us know. Post them in the comments below. Good luck!