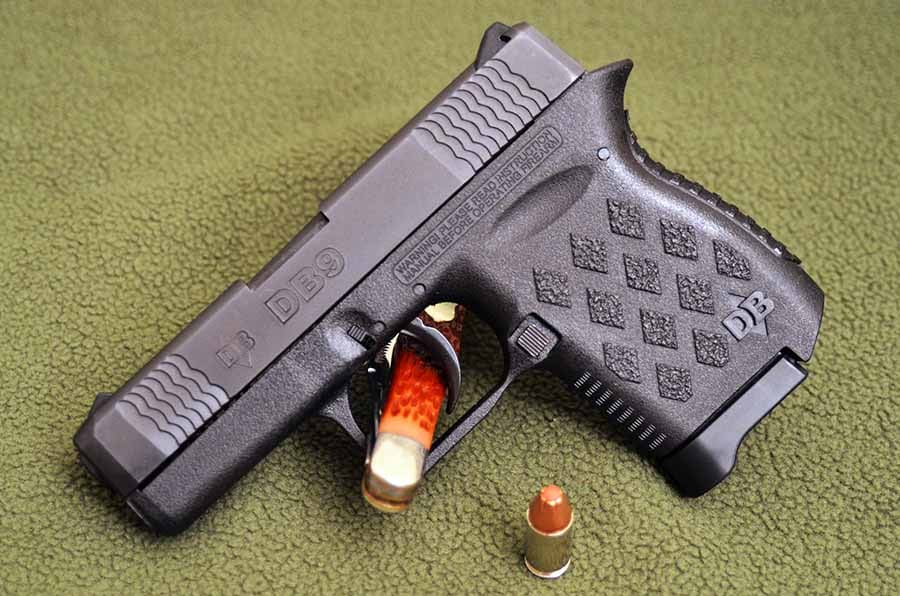 The Diamondback DB9 is a lot of gun in a very little package. (Photo: Kenny Hatten)

When released a few years back, the Diamondback DB9 caused a stir in the compact pistol world, quickly developing a cult following among people who wanted all the power they could cram into the smallest pistol possible.

The DB9 is one of the smallest full-powered 9mm handguns on the market. It’s incredibly light, thin and easy to conceal. With six plus one rounds of 9mm inside and another six just a mag-change away, the diminutive DB9 packs monstrous firepower disproportionate to its size. Is the Diamondback DB9 the single-stack micro-Glock shooters have been asking for, or a cheap knock-off?

Despite its Glock-like appearance, the Diamondback uses a traditional double-action trigger and feeds from a single-stack, steel-bodied six-round magazine. Though shooters shouldn’t simply fill this mag with whatever ammo they have lying around, the DB9 can be a picky eater.  The manufacturer suggests nothing more powerful than standard pressure 124-grain loads should be used in their pistols.

While this would be a deal-breaker in a full-sized, mass-produced weapon, it’s unsurprising in a custom sub-compact. Though shooters should already be in the habit of thoroughly testing their desired defensive load before committing it to carry.

The first thing most shooters will notice, after realizing it’s not a Glock,  is how thin and oblong the nicely textured grip frame is. The molded skip-checkering and serrations on the grip frame are sharp and aggressive, helping shooters hang onto this little beast. The next thing shooters will be drawn to is the attractive fish-scale slide serrations. This style came in vogue with the introduction of the Smith & Wesson M&P series of handguns, and provides a positive, unilateral gripping surface. 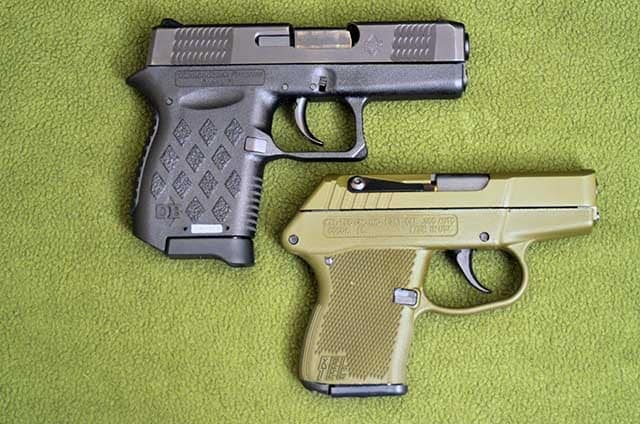 Like anything engineered for compact power, the Diamondback has to compromise in some ways. Firing the pistol is an experience, because it is extremely lightweight. Recoil is memorable, and with my natural grip placing the second joints of my middle and ring fingers centered on the front strap, it felt like someone had whacked my fingers with a small hammer after a full magazine.

The sharp recoil snaps the front strap against a shooter’s fingers with authority, and forces the user to white-knuckle grip it. There’s just that much power in this little blaster.

To combat this, I installed a Hogue grip sleeve. While effective, the DB9 is still not fun to shoot, and will never make it into your range back as your favorite plinker. If you have a lot of flesh in the web of your hand, be careful. This little pistol will bite you like a Walther PPK. Just like Mr. Bond’s favorite pistol, it rides fairly low in the hand and there’s not a lot of back strap between the web of a shooter’s hand and the bottom of the moving slide.

I absolutely admire the engineering that went into this little gun; it’s a 9mm pistol only a shade bigger than most .380 ACP guns, and it actually works. To shoehorn that kind of power into a pistol as small as a Kel-Tec P3AT is nothing less than remarkable.

It is far more accurate than such a small pistol has any right to be, and functions very well with Hornady Critical Defense 115 grain XTP polymer-tipped hollow points. Recoil shy and first-time shooters needn’t apply; This little hoss will punish poor technique, refusing to run if not held properly. In fact, the only reliability issue I encountered is when I changed my firing grip to get comfortable during my string and ended up limp-wristing. The pistol immediately short-stroked. Although after clearing the jam, and adopting an aggressive, locked-wrist firm grip on the pistol, it ran fine on whatever I fed it. 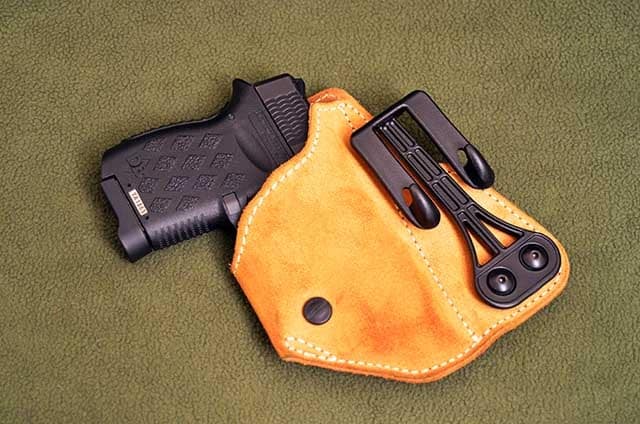 The sights are tiny by any standard, but surprisingly clear and sharp for their size. Taking my time with slow fire, I was hitting clay pigeons at 50 feet. This sort of accuracy is more than enough for the DB9’s intended role as a deep concealment handgun. It’s unlikely shooters will be using the sights at the near-contact distances anyway. It’s more of a last ditch, close quarters “Get off me!” gun, which makes the power of its 9mm Luger cartridge a welcome addition.

One unfortunate aspect is the difficulty most buyers will have finding a holster for their DB9. The best option currently is an Uncle Mike’s neoprene sleeve holster for concealment it inside the waistband. People who prefer pocket carry can find any number of generic holsters that fit the DB9. If something more specialized is needed, there are numerous custom holster manufacturers out there who should be able to craft a tailor-made carry solution that suits your needs.

Another option is the Blackhawk leather IWB holster secured by plastic hooks inside the waistband. With only the tips of the hooks showing below the edge of a belt, the Blackhawk does a great job of securely hiding the DB9’s chunky frame. 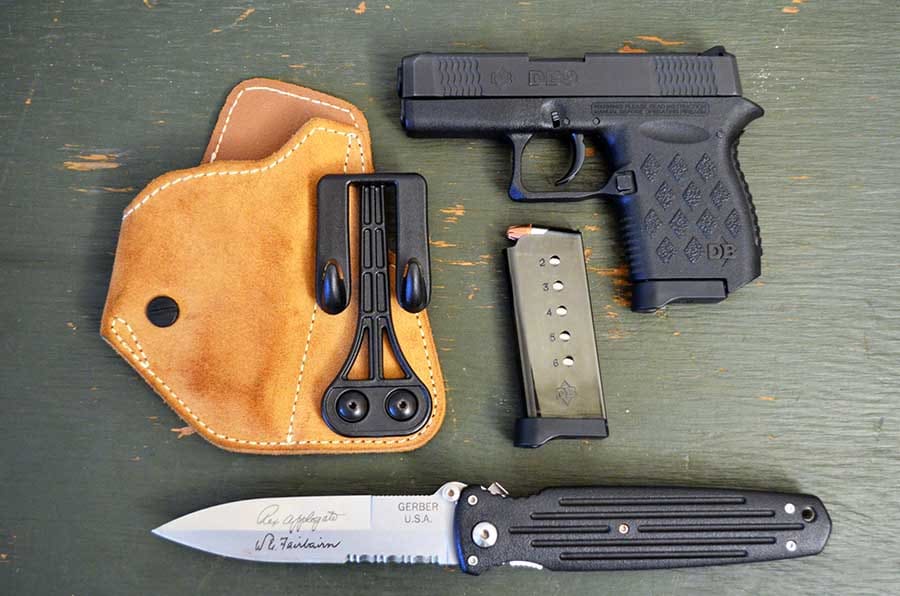 The Diamondback DB9 is part of this complete carry package. (Photo: Kenny Hatten)

With a quality holster and a couple of spare magazines, this little pistol makes a great summertime gun, because it’s so small and light you’ll almost forget it’s there, which is exactly what you want for those times when you can’t wear heavier clothing or jackets. The finish on mine has been extremely durable. Even after carrying it outdoors in some of the hottest, sweatiest weather this year, it hasn’t rusted at all.

Retailing for $431, the DB9 is well worth the price to shooters searching for a small, powerful concealable handgun. The stout recoil and finicky diet might be a dealbreaker for some, but when you consider the fact that you’re not going to be shooting a 500-round match with a hideout gun, the decision becomes much easier. Until someone comes out with a better pistol that packs this much power into such a small package, I’ll carry my little monster with no complaints.