Do you carry your handgun with a round in the chamber? 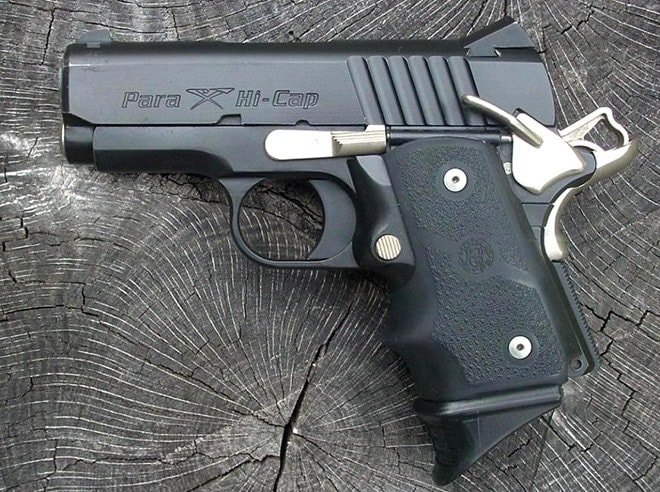 Many of the reasons some don’t want to carry a pistol with a round chambered is because of bad advice and rumors based around the 1911. (Photo: David LaPell)

There’s a debate that I see pop up in some gun owner circles all the time that concerns me. What concerns me is gun owners getting bad training advice or, even worse, safety advice. That debate is whether or not to keep a round in the chamber while carrying a pistol for self defense.

In discussions over carry doctrine, specifically whether it’s wise to keep a round in the pipe, one anecdote that’s unavoidable is something referred to as Israeli carry. Briefly, this refers to the belief that when Israeli Defense Forces carry a handgun, they do so without a round in the chamber.

While the Israelis certainly didn’t invent this concept (Jeff Cooper was writing about “Condition 3” or C3 in the earliest days of “autoloaders”), they have popularized it as an entire method of presentation, perhaps a decision based on safely equipping a large, untrained civilian army with a large variety of handguns. Far be it from me to question why the IDF trains this way. The best idea I can come up with is that, like any military, the IDF does not view handguns as a primary weapon system. Rifles hold that place. 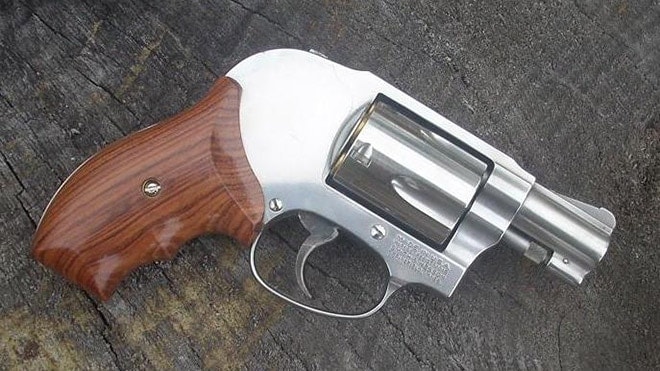 For years those who denounced carrying a pistol with a round chambered said that small revolvers were better, despite the fact that both have the same issues. (Photo: David LaPell)

But I also don’t think you should necessarily base how you, an American civilian, carry your handgun on a military that has entirely different needs and threats. IDF training is for, well, the IDF — that is Jewish soldiers operating in a hostile combat environment. While they may carry their sidearms without a round in the chamber, in my opinion, the IDF isn’t the best analogy to North American concealed carriers.

Luckily, for a much better analogy, I feel one need look no further than how US law enforcement agencies train. Outside of SWAT training, these professionals rely on their handguns primarily over long guns — and one would never think of them carrying around a pistol without a round in the chamber.

One of the more puzzling things I have heard as to why someone would carry a handgun without a round chambered is that they are afraid of the gun going off by accident. Or someone getting a hold of their gun. Or someone using it against them. Etcetera.

I have tried to figure out where this mentality comes from (besides a lack of self confidence or situational awareness, of course) and one thing I’ve come up with is that some gun owners may be getting their facts passed down to them from older shooters. This got me thinking about some of the older handguns I’ve encountered over the years, many of them small pocket pistols that did not have hammer block safeties. 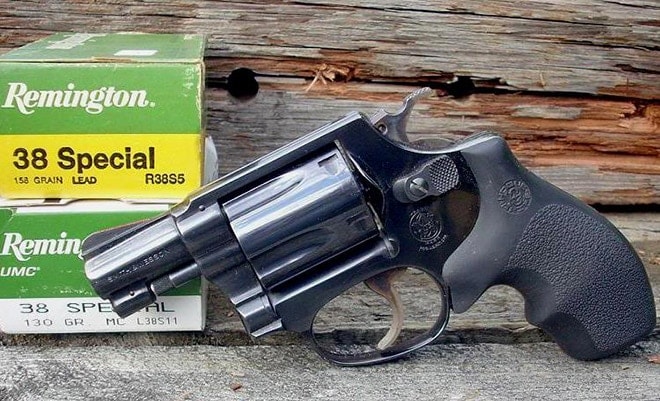 Many of the same doctrines regarding carrying a fully loaded revolver are the same as a pistol with a round chambered. (Photo: David LaPell)

In all honesty, I can see these guns being a source of consternation. Additionally, I have heard older gun owners (who may have also been biased towards revolvers to begin with) tell newer shooters that those old pistols were pretty likely to go off if they’re dropped or treated roughly.

The problem is, times have changed but the rumors persist. And when a rumor sticks it sticks hard. While many of us might not like all the regulations or some of the choices gun makers have made in the name of liability, one thing we can all agree on is that the pistols coming out now are safer than ever. The list of pistols that have a drop safety to prevent the gun from going off unintentionally when impacted is quite long — you need to look no further than any of the handguns allowed in the state of California. Any handgun sold there has to pass a test where it is dropped with a live round chambered. If it goes off, it fails and cannot be sold in that jurisdiction. You can bet any gun allowed for sale in that state is pretty darn “safe.”

Another reason I’ve heard people say they’re hesitant to carry a pistol with a round chambered is that they own a handgun without a manual external safety. It’s often not that these guns have no safety whatsoever — many have something like a trigger safety like a Glock or something similar. This goes back to training or a lack thereof. No matter the type of safety on the gun or where it is located, the ultimate safety belongs to the hand and mind of the person carrying the weapon.

Another issue is familiarity. I’ve known folks who were leery of trying newer technology because the bulk of their training experience was with a 1911-style pistol or a SA/DA where you have to use the decocker to activate or deactivate the safety.  This thinking can apply to just about anyone who feels wedded to one platform in particular. 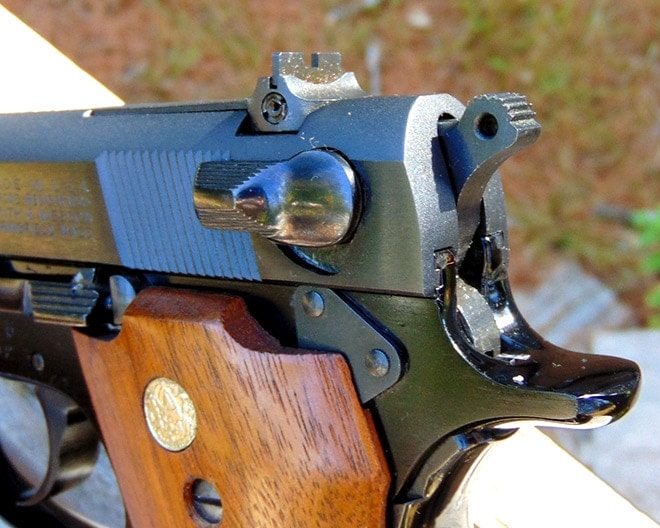 Some think that for any handgun to be safe it must have an external safety of some sort. (Photo: David LaPell)

To return to my earlier point about the shooter being the ultimate safety, I view carrying any semi-auto pistol the same as I do carrying a revolver. Over the years I’ve known many who didn’t feel safe carrying one, gravitate towards the other despite the fact that practically the same issues are there for both handguns. It really ends up being more a matter of personal preference in the long run.

Many times when you hear about a negligent discharge or “a gun going off when it’s dropped” it’s because the handgun was never carried properly in the first place. Throwing your handgun into a pocket without a holster means that the trigger is exposed to all sorts of ways that it can get depressed. Carrying a handgun in a cheap, one-size-fits-all variety holster is a great way for it to fall out when you don’t want it to. 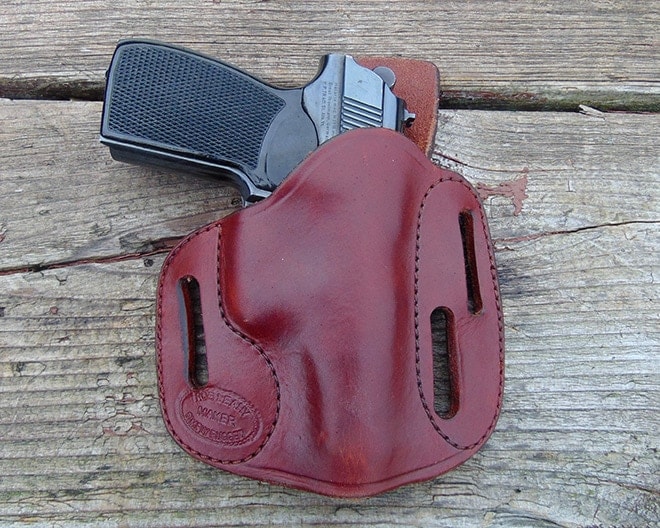 Carrying a handgun means using a holster that properly fits the gun so it doesn’t fall out and risk accidents or worse. (Photo: David LaPell)

Proper carry also means that you know how to operate all of the features on your handgun before choosing a carry rig. Knowing where all of the safeties, releases and features are, internal and external, knowing how they work and what they don’t do, will eliminate the chances of you explaining the newly placed hole in your floor, if you’re lucky, or worse, explaining to a police officer the hole in yourself or a bystander.

If safety and gear related issues haven’t convinced you to carry your pistol with a round chambered, than there is always the reason that you’re carrying a gun in the first place and all the seriousness that entails — for personal defense.

For most people — even those with high levels of training — drawing a handgun from concealment takes anywhere from a couple of seconds to even longer. Now consider what Salt Lake City Police Sergeant Dennis Tueller discovered way back in 1983: an attacker armed with a knife can cover a distance of 21 feet or 7 yards in 2 seconds. It’s very hard for most shooters, even the most qualified and trained, to draw and fire a handgun from concealment and hit the attacker with a handgun that has a round chambered in 2 seconds. Now add the time it would take to draw a handgun and, even under the most ideal conditions, chamber a round and fire accurately on a target. I am willing to bet that it is nowhere near 2 seconds. Then of course the thing to remember is that if you’re having to draw and fire your handgun to save your life or the life of someone you love, there is no such thing as ideal. 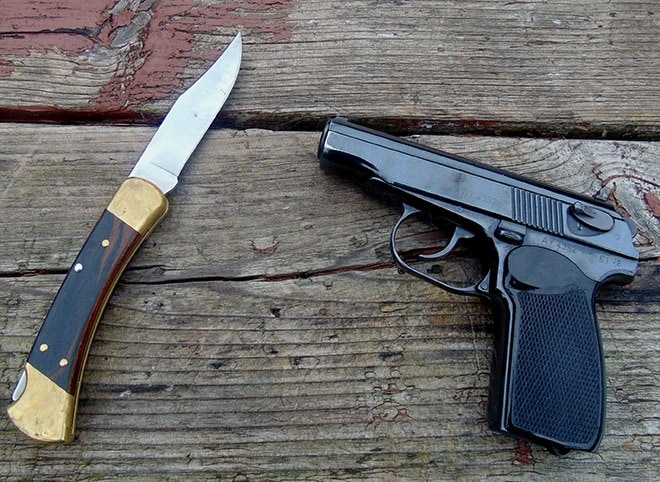 An attacker armed with a knife takes two seconds to cover 21 feet, too long to chamber a round and accurately fire a shot. (Photo: David LaPell)

Now imagine this scenario: you’re loading your kids into the car in a darkened parking lot, you’ve got one in your arms (which makes you a tempting target for someone out for no good) and now you have to draw your handgun and chamber a round. Or this one: you’re out somewhere, and someone gets close to you, very close, and things go wrong and you need to draw your gun, and the bad guy gets a hold of one of your arms and won’t let go and the only way to fire your gun is to rack the slide. I suppose you can hope the mere sight of the gun makes him compliant, but do you want to take that chance?

I don’t think it takes too much of an imagination to see that by not having your gun in the proper condition, things can go wrong and tragically so.

So this brings us back to the original point of this article: what should people who feel uncomfortable about carrying a pistol with a round chambered do? I suggest that you get training, which is the most important aspect of owning any handgun. You need to be familiar and confident in what you’re using and training will build these things up in anyone who takes the time. Training will help you get used to the gun, sort out your fear of it and teach you how to use it safely — the way all guns were meant to be used. And on that note, if you are afraid of the gun you are carrying, you should not be carrying it, period.

Carrying a handgun for personal defense comes with a lot of responsibility. Part of that means you should carry it properly and to be ready to use it if need be. Having a handgun that is not in the position to be used safely and responsibly puts not only you at risk, but others as well, and if you are not prepared to carry a pistol properly and safely, then perhaps you should rethink carrying one altogether.