For the past two years I’ve known that I wanted to take my firearm collection to the next level. I wanted to fill that hole in my gun safe that I didn’t know was empty. After spending over five years in the Army and seven years studying NFA firearms, I could tell that a belt fed rifle could fill that spot in my heart. When time came I decided to purchase a DSA RPD Carbine, and I’ll tell you why. 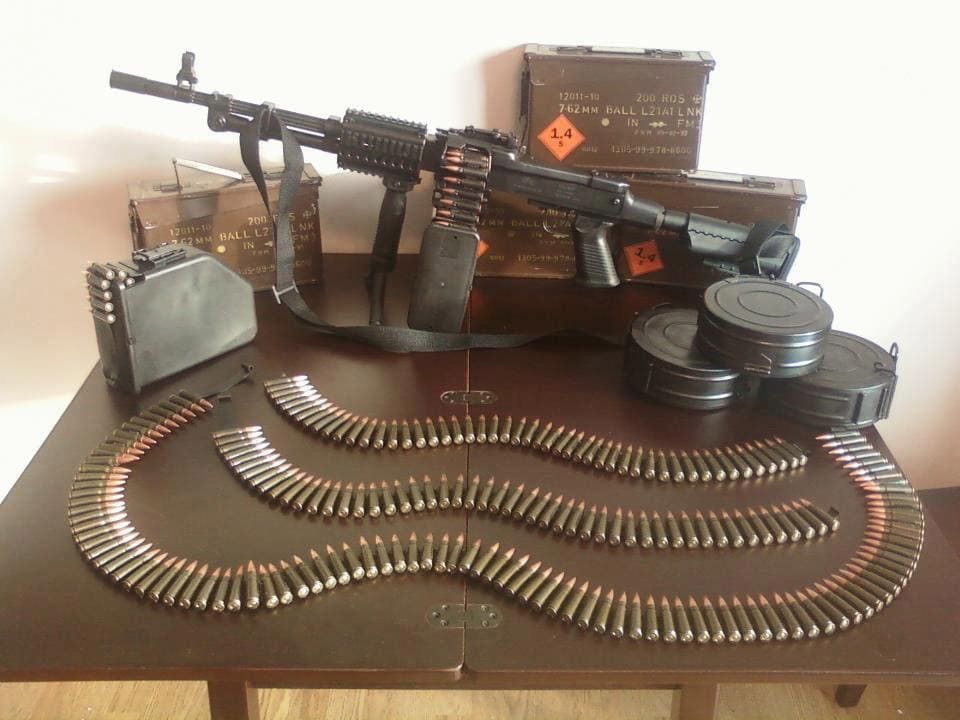 After looking at all the available options, including Browning 1919s, M249 SAW, Ares Shrike, PKMs, Valkyrie Armament BSR, and a few other options, I found the RPD Carbine offered by DS Arms. The price wasn’t the only immediate benefit. Ammunition prices were significantly cheaper than the other rifles and conversions, and there is no need to buy a tripod, belt linker, or other associated mounts. The RPD Carbine is sold as a complete weapons system, included were a bipod and grip combo, two one hundred round belts with their respective drums, a carrying case, and an adapter to use SAW ammunition boxes and pouches. The use of the 200-round M249 SAW boxes allow me to carry an extra 40 rounds loaded in the rifle, and the SAW boxes are cheap and quieter than the original metal drums.

How can you pass up a deal like that? Well, I couldn’t.

In case you didn’t know…

The RPD was originally designed by the Russians to fill the squad automatic weapon role. The RPD is chambered in 7.62x39mm and feeds from sectioned belts that disintegrate at 50-round intervals. The RPD has been used by over a dozen countries throughout the last 60 years, including the United States. DS Arms has breathed new life into a weapon design that dates back over half a century. 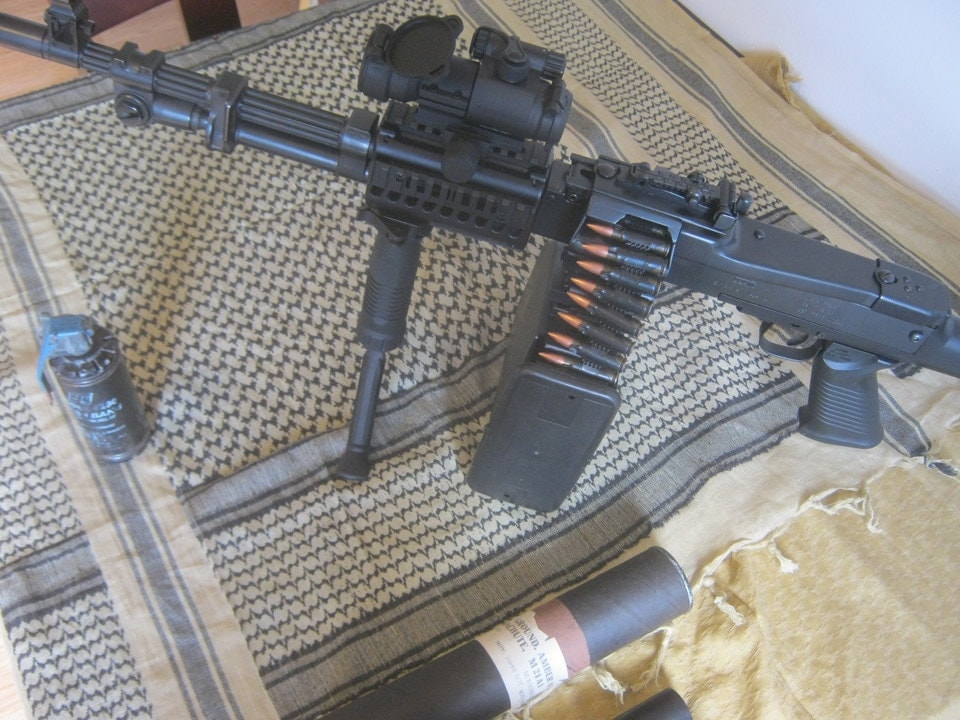 The rifle showed up at my dealer while I was still deployed on my last tour, and it was one of the things I looked forward to most when I flew home. The rifle was packaged very nicely and came in a nice hard gun case and at first look just screamed quality. After getting home I took a closer look at the rifle, and my first impression was correct. Every part of this rifle is machined to perfection. You can’t tell the difference between 1950’s original parts and DSA’s new manufactured parts.

DSA starts with original Polish RPD parts kits and completely remanufactures the rifle. Starting with a new production receiver, they then add a new 14-inch fluted barrel with a 2-inch permanently attached FAL flash hider that does its job very well.

DSA replaces the original wooden handguard with a machined aluminum quad rail fore end that sits solid enough to mount a sight on. DSA also replaces the original lower receiver with a newly designed lower that moves the recoil mechanism into an AR-15 style buffer tube. The use of a buffer tube allows them to replace the wood stock with a VLTOR modstock that allows for excellent adjustment and comfortable cheek weld. The new lower receiver also mounts a M249 SAW pistol grip allowing greater control of the rifle. Inside the lower receiver sits the semi auto fire control group inside a titanium housing. All of these modifications make the rifle into a lighter, more compact package.

With six 100 round belts loaded up I headed to the range and it didn’t take very long to get the rifle set up and ready to start burning through ammo. I shot Russian steel cased ammo — this is a Russian designed machine gun, after all. 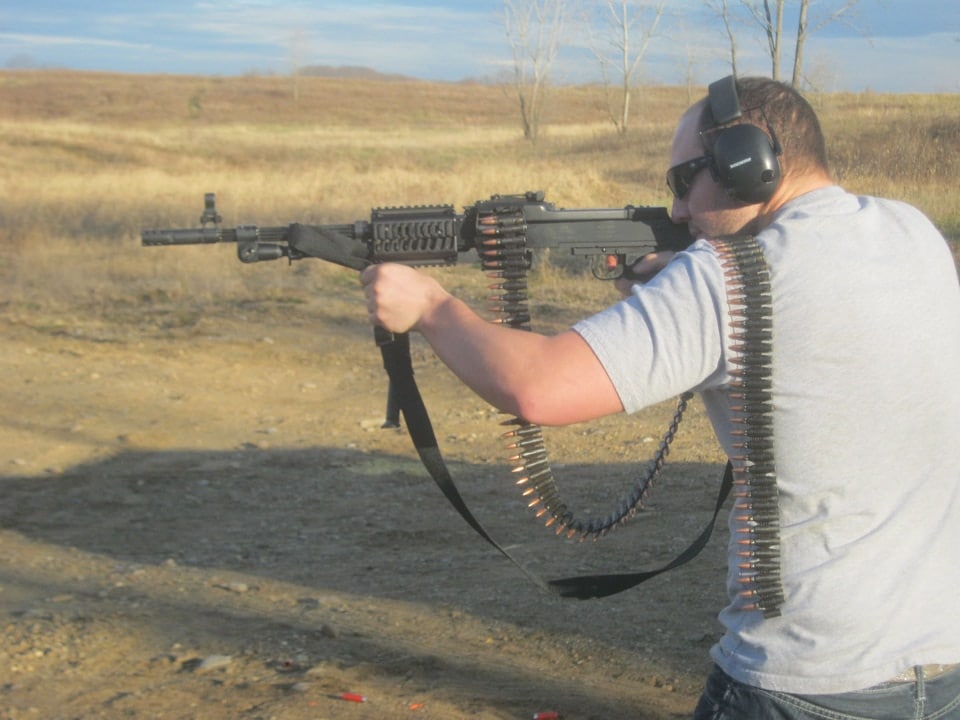 The rifle has a three-position adjustable gas piston system. Starting out on the middle setting for break in, I loaded the first belt. Loading is easily accomplished by pulling the starter tab of the belt through the feed tray and charging the rifle. The first 50 rounds went off without a hitch, and the rest seemed to do the same.

I shot the rifle standing, prone and kneeling all while staying on target. The only stoppage I had was a round that seemed to have the primer installed backward.

Recoil was comparable to that of an AK47 variant, until I turned the gas setting down to its lowest setting. This greatly smoothed out the recoil and made the rifle even more manageable, which didn’t seem possible at first. I then laid down in the prone position and took some slow shots at an 8-inch steel plate I set up 100 yards away. First shot rang the plate, and so did the second, and third, and so on. It seemed hard to miss with this rifle, using only the standard AK-style iron sights. I was easily shooting double taps on the steel plate keeping it swinging and ringing.

As anyone can tell you, nothing is 100 percent perfect. The RPD Carbine does have its flaws. The rifle feels a bit front heavy due to all the weight removed from the rear, but it’s not a heavy rifle, especially when compared to a M249, M60, or M240B.

The trigger pull is long for my preference, but the pull is smooth and the release will surprise you every time. One downside of the design is the lack of a quick-change barrel. But DSA helps out with barrel cooling by adding fluting to allow more airflow over the barrel, and barrel heat issues are not as big of a deal with a semi-auto rifle compared to a full auto machine gun. 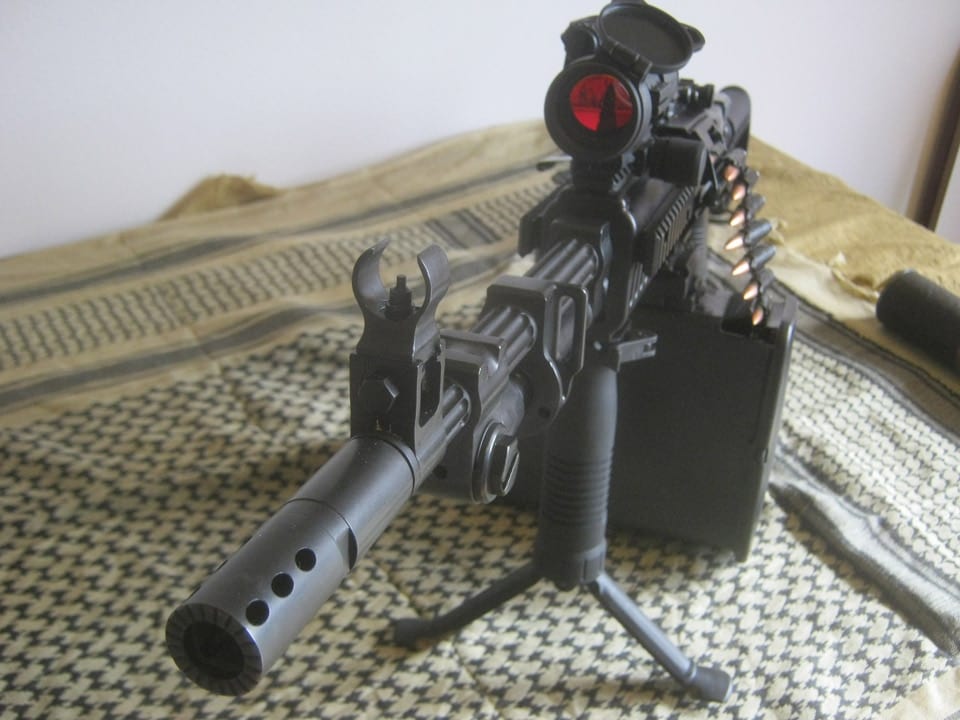 Cleaning the rifle was simple and straightforward. DSA includes a very nice manual that is printed in English and has full descriptions of the rifle. The only problem is that the manual is not written for the semi-auto carbine version, it is for the full-auto, open bolt, original Russian machine gun. So not everything is exactly the same, but most of the components are similar enough that you can’t screw it up. Being a piston driven rifle, there is very little carbon buildup anywhere except for the tip of the piston.

The DS Arms RPD Carbine has an MSRP of $2,850, which may sound like a lot at first, but after you look at all the work that has been put into the rifle, and the value of all the accessories that come with the rifle, it ends up being well worth the price of admission. For around the same price as a Bushmaster ACR, FN SCAR, or high end AR15 variant, you can own a belt fed squad automatic weapon, well at least a semi auto one.