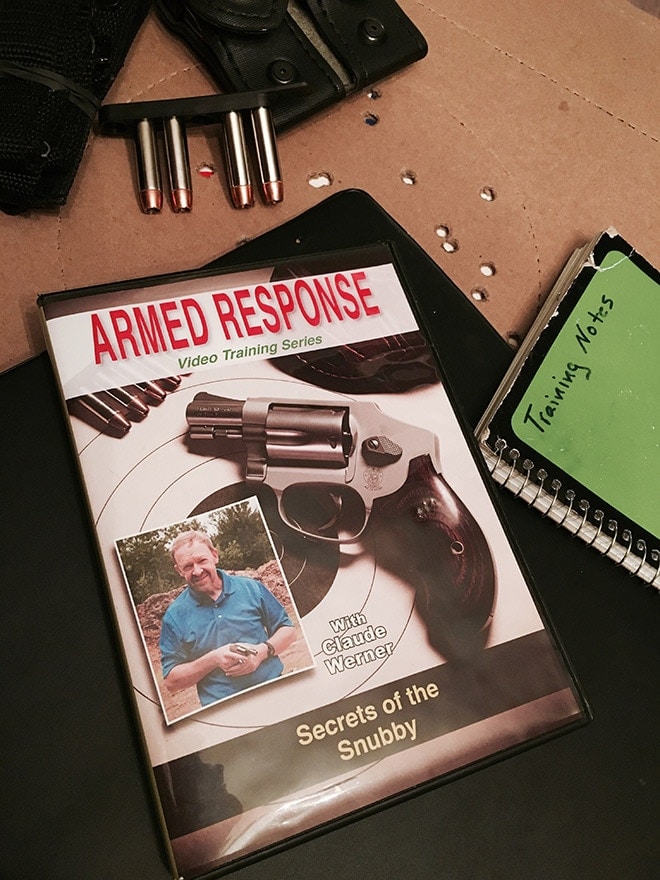 “Armed Response: Secrets of the Snubby” with Claude Werner is available now on DVD for 19.95. (Photo: Nate Parker)

When it comes to revolvers, and especially snubnose revolvers, one of the instructors at the top of that game is Claude Werner. Claude’s background is pretty much impeccable. He served in the military including time in the Special Forces, afterwards spent some time in the private sector real estate business, and ended up as the chief instructor at the Rogers Shooting School. Werner realized there was a gap in the training industry, and set out on his own to become the pocket gun guy. Specifically he became known for his snubnose revolver work, using a snubnose revolver to compete in sanctioned IDPA matches, and doing quite well with it.  Unfortunately for us, Werner has stopped teaching his snubnose classes on a regular basis. Fortunately for us, he has a couple DVDs out, and that is where the Armed Response: Secrets of the Snubby DVD comes in.

The DVD is on a single disc and features Werner as the primary presenter; the run time is just a hair over an hour and Werner covers most of that time. For a DVD on how to shoot a snubnose, this is probably one of the best, if not the best. For a DVD on how to run a revolver in general, this is probably one of the best as there is enough similarity between a snubnose and “duty sized” revolver that many of the techniques cross over. If you shoot a revolver, there is an incredible amount of value in this DVD, regardless of if it is a snubnose or not.

The DVD kicks off with Werner talking about triggers, specifically how to work a revolver trigger and how that varies from the typical semi-automatic trigger. This is an important place to start. Revolver triggers are not the same as semi-auto triggers. They are usually heavier and when shot in double action as they should be in a defensive context, significantly longer. Learning to properly run a trigger on a revolver is paramount to shooting the gun well.

He also covers fitting the revolver to the shooter through choosing the proper stocks to put on the gun. He is strictly practical in this context. It doesn’t matter what the stocks look like, it matters what performance characteristics the stocks provide to the shooter. Generally speaking, the idea is to use the stocks to adjust the “length of pull” on the revolver to fit the shooter’s hand size. This is probably an area that is too often overlooked by revolver shooters for either aesthetics or to fit a specific part of the handguns intended use (i.e. small, slick boot grips for pocket carry). The actual ability to shoot the gun well is either overlooked, or not a priority.

As one might expect, there is a considerable amount of time spent discussing reloading a revolver, both in terms of how to carry the extra ammunition, and how to execute the reload. Wener covers how to use five different types of speedloaders, how to use speed strips, and how to load the handgun with loose rounds. He uses a traditional FBI style reloading method, using the support hand thumb to work the ejection rod, and rotating the gun over so that the muzzle is pointing towards the ground and indexing the butt of the revolver flat against the abdomen. This is one area that I wish were covered more in depth. There are quite a few different methods out there for reloading a revolver and there is not really any explanation as to why Werner prefers the one he does or the pros and cons of the different methods.

Once reloads are thoroughly covered, Claude essentially works through an abbreviated version of a live fire practice session. He is big on using a variation of the ball and dummy drill to help improve marksmanship skills. I think it would be feasible to take this live fire portion, add a few more repetitions of the drills, and end up with a very solid basic practice session specific to the revolver. I am not certain if this was the intention, but the potential is definitely there.

The last 6 minutes of the DVD are taken up by another instructor, Wayne Spees. Spees’ background is primarily law enforcement, having served with the San Diego Police Department for 31 years before retiring. He covers some things that Werner does not, like one handed manipulation of the J-frame, shooting on the move, and using the J-frame as a backup gun. While I think I understand the purpose of adding the additional material, it would be better to have had it covered by Werner. If the material is going to be covered by another instructor, then is needs to be expanded so that it does not come off as being an afterthought as it does currently.

Overall, the amount of information in this DVD is incredible. I also appreciate that each segment is ended with “Chapter Notes”, a brief summation of the material covered. Sometimes when I watch a video I miss small pieces of information or the information might be buried inside of another topic. With the Chapter Notes it gets highlighted and brought out to front and center for easier processing and retention.

I will say that even though the information contained in the DVD is top quality, the style of the video is a bit bland. It is not the most exciting DVD, and may require being watched a few times to draw all of the information out of it or watched in smaller segments to stay engaged. The price tag on this little gem is really not that bad at only $20.00 plus shipping. For the amount of information contained in the DVD from one of the country’s top revolver instructors, it is worth every penny.