It hasn’t even been a week since the end of the 2013 SHOT Show, and I’m still trying to wrap my head around the experience.  63,000 people.  1,600 booths.  I made it a point to walk every aisle, at least once, and I am still seeing pictures on this site (and others) of things I missed.  It is eating me up inside, honestly.

But I did see the show.  I didn’t find as many new guns as I’d expected.  There were lots of new versions.  Permutations.  Updated calibers.  Some amazing finishes.  But very little that stood out to me as new in the abstract sense.

But that doesn’t mean that I wasn’t pleased by what I saw.  Here are five guns that I looked at more than once.  Each is a great gun in it’s own right, but these five represent some subtle trends and one that is clearly deserving of the top honors of 2013.

5. The Chiappa Little Badger (an end to zombie nonsense?)

Chiappa has taken a minimalist approach to the .22LR.  This one will surely be popular with the preppers, hikers, and those who like to travel light. It is small to start with, and folds up nicely.  It is little more than a wire stock and a barrel, but the rest of it (and that’s not saying much) is surprisingly robust.  You might expect a wisp of a rifle like this to be fragile, but no.  The Little Badger is small, light, and built to use.

And that may not be exactly new, but it is refreshing.  I think the Little Badger is a step back from the zombie nonsense.  It allows shooters who want to be prepared to carry a tiny little rifle that is in no way gratuitous.  I hope to see more guns like this.  No word yet on price.

Colt’s taking a retro approach to the AR-15 .  Their AR-15 A4 is fascinating nod to the old-school M-16.  When I first heard that these were in the works, I kept having flashes of the P.T. Cruiser.  I’ve never been enamored by modern homages to late model cars, and I didn’t know how I’d take to an M-16 wannabe, which was how I was thinking about the A4.

But I like it.  I think Colt could even go farther back.  While I like the updates inside the gun, I’d like a AR-15 that was an exact copy of an late 60’s era Colt.    But this one will do for now.  And it is nice marker for the development of AR culture.  Most AR-15s seem to push forward.  They improve a stock, or add a piston, etc.  But the AR-15 A4 acknowledges that there is something functional and beautiful about the AR’s past.  The acknowledgment will run you somewhere around $1,200.  Is this the first acknowledgement that the AR platform, which is 50 years old, is an antique?  Should we say classic?

We know the 1911 platform is classic.  And timeless, too. Kimber has introduced a new .380 that will compete with Colt’s Mustang. The Micro CDP.  While it isn’t as streamlined (or as powerful) as the Solo, the new little Kimber has some style, and the little Micro is built like a Kimber.

I like the .380 craze.  There are some detractors out there who prefer the 9mm, and I hear them.  But we’re seeing a return to classic style.  Aesthetics.  As much as I respect the polymer pistols, I’ve not seen one yet that looks as sharp as an old Colt 1908.  These new .380s are getting there.  The Micro CDP will look as professional under a suit coat as it will tucked into the waistband of a pair of jeans.  MSRP: $1,100. 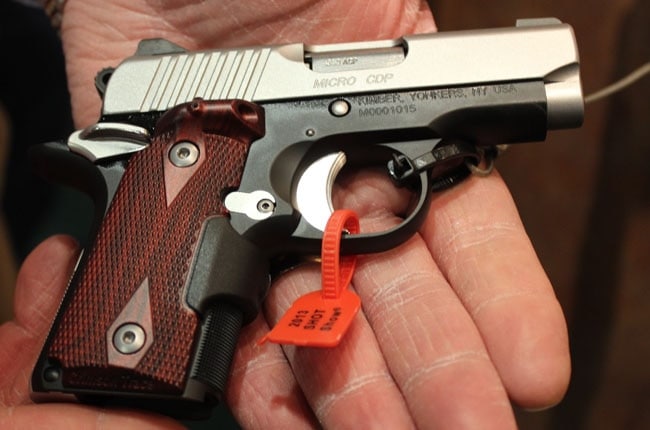 It is nice when form and function come together, like they do in the Kimber.  But sometimes a gun just works so well that it doesn’t matter what it looks like.  For me, that’s the Tavor.  Israel WEapon Industries‘ new bull pup is very compact and ergonomic. It isn’t new, exactly.  But it is new to us.  And the news that they’ll be making them over here is a welcome update.

As a big man, I’m often uncomfortable with guns as small as the M-4.  The typical AR-15 feels like a compact car.  I prefer an AR-10 with a long length of pull.  But the Tavor feels very natural, even for me.  The compact nature of the Tavor  keeps my elbows in against my body, effectively tightening my stance.

I like the bull pup shotguns, like the KSG, and I think the Tavor is going to change the way we think about the 5.56 (and it might be the transition some have been waiting for away from the classic AR-15). 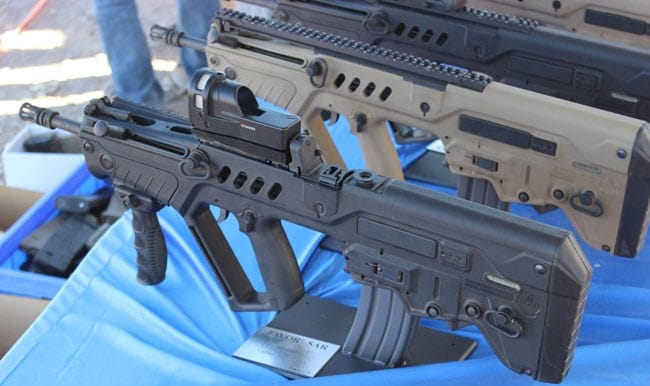 1. Tracking Point (the end to aiming)

My number one is number one by a long shot.  There was nothing else that came remotely close.  It isn’t even a gun.  Well it is, but it is so much more than that.  It is a unique culmination of technology and philosophy.  And it was the only genuinely unique thing I saw at the show.  Tracking Point.

If you’ll allow me to set the scene….  I’m not a great long distance shooter.  Never have been.  Probably never will be.  That doesn’t keep me from trying.  But I sat down at a concrete bench in the barren wasteland outside of Las Vegas last week and put a rifle up to my shoulder.  The temperature was below freezing and I’d been outside for about six hours.  I was wearing fingerless gloves so I could work the small buttons on my cameras and my hands were like ice. 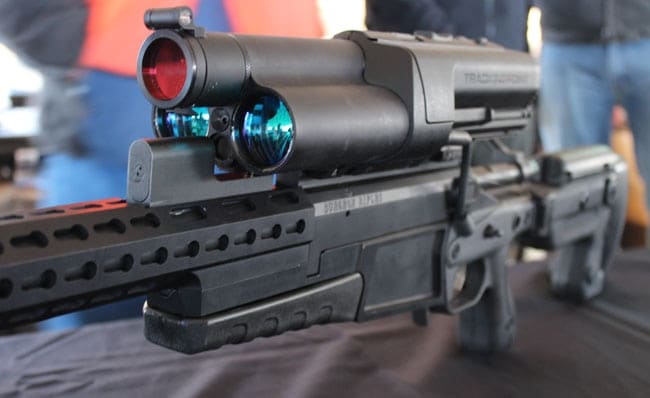 As I looked out across the expanse of the range, my spotter pointed out a target.  The steel plate (I still don’t know how wide it was) was somewhere around 900 yards across varied terrain.  The wind was blowing in on me, but gusting through the slight rises on the range.  I could see dust and debris whipping in front of the target.

I leveled the cross-hairs on the plate and pushed a button in the front of the trigger.  Something happened inside a computer that I can’t even begin to explain, but a red dot stayed on the target.  While still looking through the scope, I pulled the trigger. 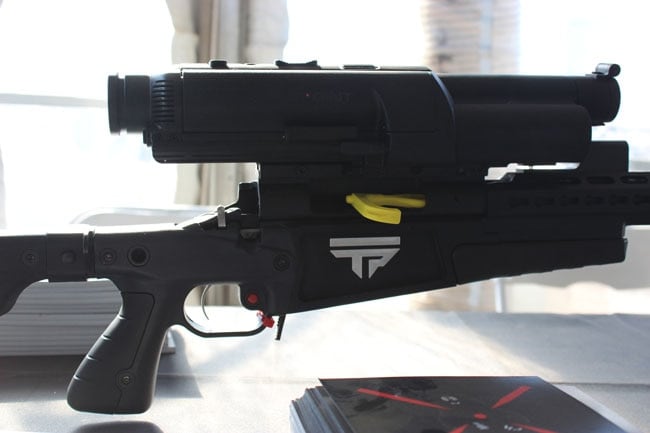 Nothing happened.  There was no give at all.  And there wasn’t for a moment.  When I again aligned the dot and the cross-hairs (to the computer’s satisfaction, not mine) the trigger went slack and the rifle bucked.  The feeling was momentarily unnerving, as I didn’t feel like I was in control.  And then my spotter said, “A hit.”

That was the first time I fired a Tracking Point.  The first time I’ve used the technology.  I had a 30 second tutorial, and watched one other shooter do the same thing.  And I hit a target at 900 yards under hellish conditions.  The whole experience lasted less than a minute.

Do you hear what I’m saying?  Everything from this point forward will be different.  It is as if all of the manufacturers at SHOT who were parading their rifles and their optics–they are selling calculators.  Nice calculators.  But there is one group of guys from Texas who are showing off a computer.

If I had to pin down the state of the industry (ignoring all things political), I would say this.  Hunting guns are getting better and less expensive, but kind of holding steady.  The AR-15 is going strong, though there are some emergent guns that threaten to unseat the American icon.  Style still matters to shooters who can afford it.  And there are guns on the horizon that will allow people like me to hit what they’re aiming at out to, and beyond 1,000 yards.