Eotech makes some rock solid optics. The Mini Red Dot Sight (MRDS) is the perfect example of their ingenuity and craftsmanship. It is an ideal primary sight for compact applications, like handguns or shotguns. And the versatile design allows it to be mounted on many other types of optics, which adds to the overall versatility of other types of weapon systems. 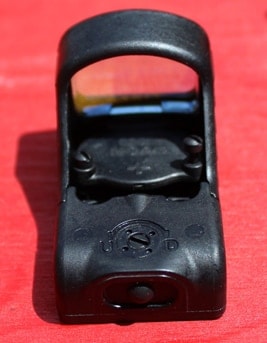 The sight is small. The dot is red. This one has a 3.5 MOA dot, which is more than precise enough for the close range applications for which the MRDS is designed.

The sight is one distinct piece. MRDS fits neatly inside a protective shroud. The whole package is just under two inches long. At an inch high and an inch wide, the MRDS lives up to its name.

It comes in either black or tan, and is “ruggedized.” Ruggedized. I didn’t even know that was a word. I think it means the site is rugged. And it is waterproof up to 66 feet, if you’re into that sort of thing.

The sight can be attached with a separate 1913 base, or affixed to other optics. The run time varies, depending on the brightness level—but Eotech says it will run up to a year on a single battery.

All of this, and it weighs less than an ounce.

Shooting with the MRDS

The MRDS has some logical applications. I put the MRDS on a couple of shotguns with great results.

The Mossberg 500 Tactical Light Forend is even more devastating when equipped with the MRDS. The dot centered perfectly in the shot pattern at 25 yards with no adjustment.

The Stoeger Double Defense doesn’t really need a red dot sight, but it has the rail—so why not? You have to compensate a little for the positioning of the side-by-side barrels. The MRDS’s dot will be slightly left of the point of impact, or slightly right—or on the left or right side of the pattern with birdshot. 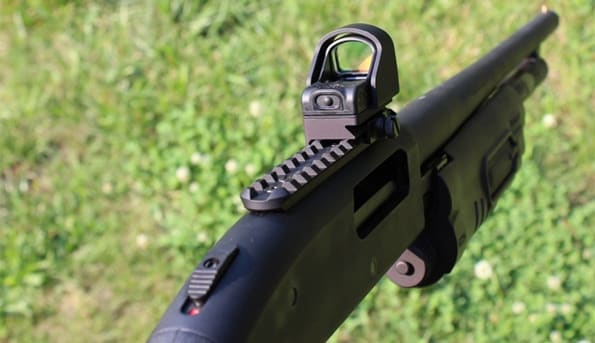 But a 3 MOA dot is overkill for a shotgun. I wanted to test it out on an AR, but couldn’t—not really. The Colt I had in at the time has a fixed front sight. The LE 6920’s removable handle leaves a nice flat rail—but the flush mount of the MRDS puts the red dot right on the Colt’s front sight post.

There are ways around this. A riser could line things up easily enough. Or maybe your AR has removable sights.

I think that most AR users would benefit from a combination of magnifying optics and the MRDS. The base of the MRDS has a 1913 rail mount, which can be removed to allow the MRDS to be mounted on top of another scope or sight. That way, a shooter can use the magnification to reach out for longer shots and the MRDS to engage close targets without having to adjust anything except which sight he or she looks through. 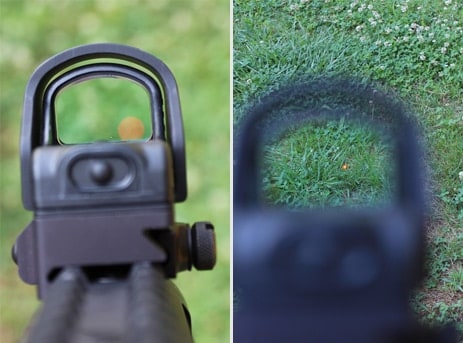 In the end, I didn’t bother with the MRDS on the AR—if only because I had something bigger, and better—the Eotech EXPS3.

There are some shooters who feel the MRDS, and all small red dot sights, provide too narrow a field of view. If you are inclined to shoot with only one eye open, this could be true. The sight is small. Miniature. But shooting with both eyes open mitigates this problem, completely. And until someone invents a true holographic sight that has no glass, one that needs no protective housing, shooters will have to deal with certain limitations to field of view.

I don’t mind the size. I think the diminutive size and negligible weight are worth any inconveniences. I had mounted the MRDS on a number of different guns. The housing didn’t get in the way of anything, for me and the MRDS made target acquisition much faster—which is exactly what it is designed for.

There are other sights like this out there on the market. Though many look the same, I don’t think there is a single competitor that can equal Eotech in performance and durability. The closest would be Aimpoint’s Micro T-1, which looks completely different.