“Only accurate rifles are interesting,” famed gun writer and outdoorsman Townsend Whelen said, and while that’s pretty much my personal mantra I’ve just had a learning experience with a new rifle that prompts me to add, “Some rifles are worthy of making them more interesting.”

OK, that’s a bit long for a mantra. But the sentiment works when applied to the rifle here, the new Excel Arms Accelerator Rifle. Available in .22 WMR and 5.7x28mm chamberings, I opted for the former when I asked for a sample to T&E (test & evaluate) for readers. I wish now I’d asked for the potentially more “interesting” centerfire 5.7×28, but we’ll get to that in a minute.

The Accelerator is a very modern carbine in concept and design, with a little bit of DNA from both the AR-15 and the polymer pistol families. From them the MR-22 gets its upper and lower receiver configuration and its metal-guts-in-a-polymer-frame architecture.

The entire stock is one-piece molded polymer, like a Glock pistol, accommodating the metal firing and feeding mechanisms. The “upper receiver” portion is a single piece of aircraft grade aluminum 18-inch long shaped to contain the bolt and barrel, with an integrally machined Picatinny rail on top for attaching your choice of sights.

The blowback action is built in a bullpup configuration, making the entire carbine only 32 ½ inches long. Though fluted, the 18-inch stainless steel bull barrel is the major contributor to the carbine’s weight of 8 pounds sans sights. The muzzle crown has a target style recess; except for that, the flutes, and the cuts for the extractor and recoil spring, the barrel is basically a straight stainless steel tube. The rifled and chambered barrel comes from Mossberg, and Excel Arms makes all the machining cuts. The carbine’s point-of-balance is right on the ventral molded “fin” just ahead of the trigger guard.

The rifle shipped to me with the optional AR-15 style A2 carry handle with aperture rear sight and front sight mount and post, both designed to attach to a Picatinny rail. I asked for these because I am very familiar and comfortable with the AR-15 and, quite frankly, I like how it makes the Accelerator look. Utilizing the carry handle for that purpose put the carbine’s balance point precisely at my index finger – very comfy. 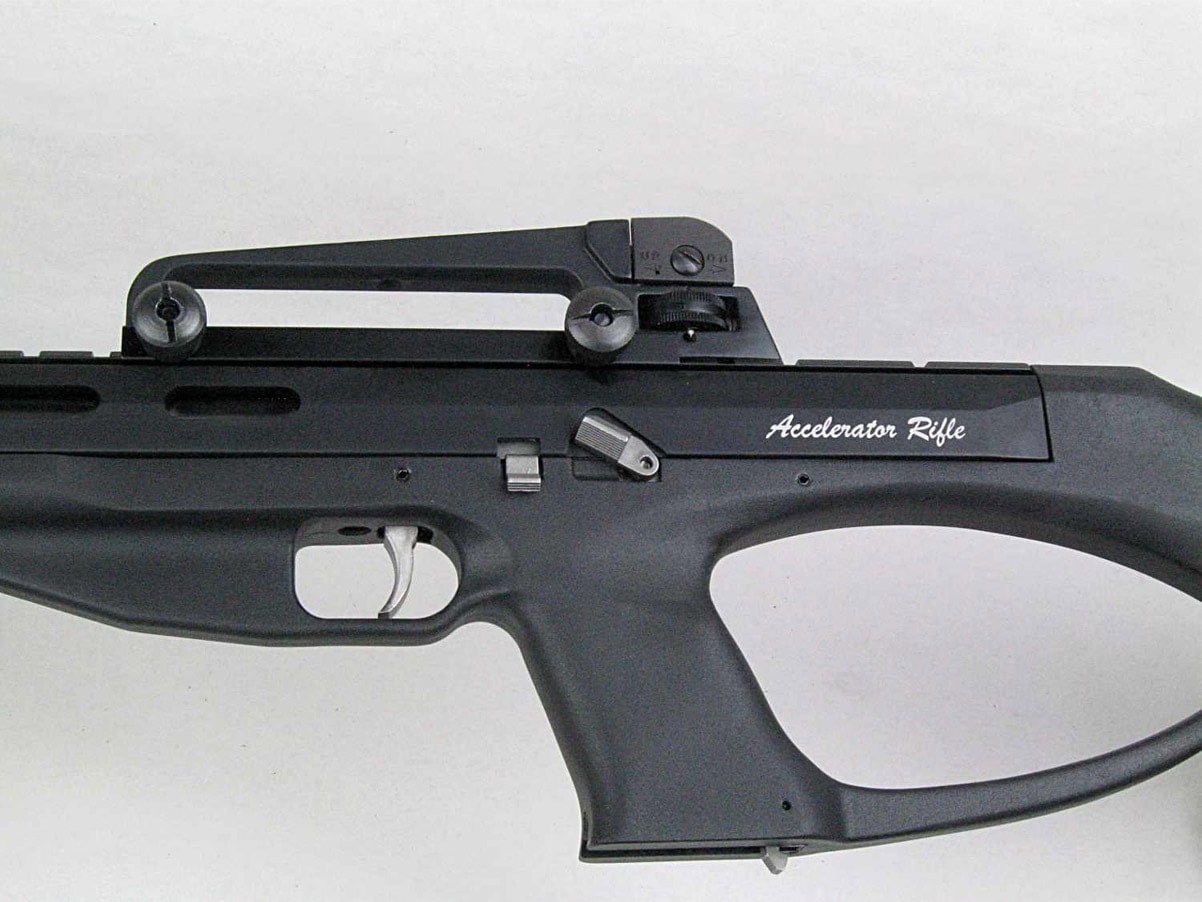 Controls – safety and bolt release – are on the left side.

The factory trigger breaks at a hefty 7 pounds, one of the few negatives I found on the MR-22.

On the left side, the bolt hold-open lever does only that – pressing it does not release the bolt. Bolt release is accomplished by pulling backward and releasing the bolt handle on the right side. Pressing downward on the two-position safety switch engages the safety, opposite of the AR-15. Also unlike the AR-15, with my medium-size hands my thumb could not reach the MR-22s safety without shifting my grip on the carbine. The nine-round magazine is held in place by a heel catch at the floorplate.

Before I roll out of the chocks with a range report, I’ll say in all fairness that I am not enamored of the .22 WMR cartridge for Whelen’s reasoning – I have never seen any firearm so chambered that was “interesting.” Yes, accuracy is relative and I don’t expect ¼ MOA from the cartridge, but I do expect that, when I aim at a bunny’s 3 MOA head from 100 yards away, the bullet goes there and I get a maximum amount of undamaged bunny meat for the crock pot. The cartridge is fully capable of delivering good terminal performance even well beyond that range, but I’ve never seen the cartridge/firearm deliver that kind of accuracy. Others may have and maybe I’m just cursed. Handloading for accuracy is not an option with this rimfire cartridge; couple that with the fact that .22 WMR is two to four times the cost of .22 Long Rifle ammo, and that even if I found an “interesting” .22 WMR rifle it doesn’t have a comparable four times the performance of .22 LR, and you see my perspective.

I’d hoped the Accelerator and its bull barrel would change my opinion. To give the carbine it’s best shot I mounted a 36x Weaver T-36 scope on the carry handle, employing a TAPCO fiberglass reinforced polymer rail to allow the scope’s objective bell enough height to clear the upper receiver/fore end. Firing was from sandbags on a concrete shooting bench at my club’s range on a not-too-warm, sunny day in the mountains of Northern Arizona. Winds were gusty and stiff, shifting and swirling from 3 o’clock to six o’clock. Targets were ¾-inches black pasters on white paper; the 36x magnification was so good at 50 yards that I could actually choose where to hold inside the paster.

I tried a handful of different loadings, including Federal Premium and Federal Game-Shok, Winchester Supreme, CCI Maxi-Mags and Hornady V-Max. Oddly, five shot groups consistently appeared to experience one flyer – due to the squirrely wind, most likely. But even including flyers, the Federal 50-grain load shot groups just over an inch, the best one being 1.3 inches. The lighter Hornady bullet did even better with a best 1.08-inch group, and if we discount the lone flyer, that group shrinks to a truly impressive 0.37 inches. Accuracy testing such super light bullets at 100 yards in the rambunctious winds would have been futile and unfair; instead, I used the remainder of the ammo to rapid-fire fully loaded magazines offhand using the iron sights to check functioning, which was flawless. And fun! The Accelerator excels in this mode, its weight and balance making it a pure joy to shoot rapid fire offhand.

Operationally, the only hiccups were a single failure to extract a spent case at about the 100th round, and twice with the same magazine the bolt locked back with a single cartridge still remaining in the mag. Pretty minor stuff that you’ll routinely find during break-in of any new firearm. Literature that came with the carbine says break-in takes 200 rounds. The magazines come with little curved rods to insert into the follower and press down with your thumb to make loading much easier. Quick detachable sling swivel mounts are standard. As I received it, with the sights, two mags and a sling, that MSRP is $759.  (Note: Base model starts at $512 and runs up to $937 depending on features). 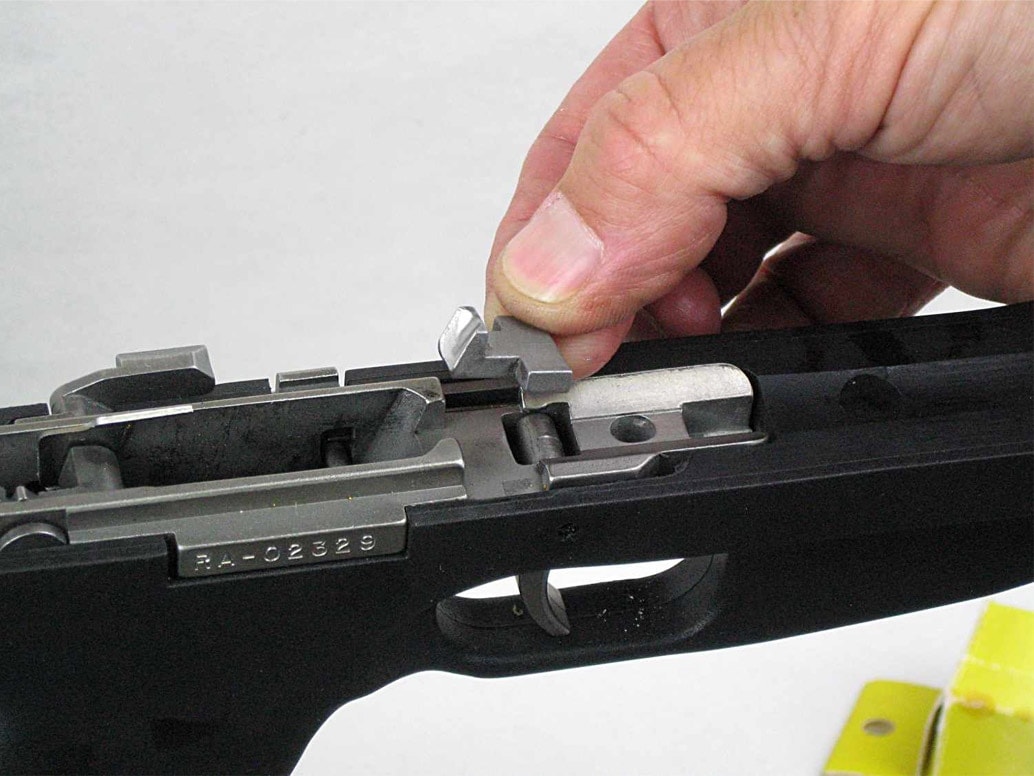 Don’t lose the floating bullet guide when you di assemble the Accelerator – nothing retains it when you remove the four bolts.

The owner’s manual discourages any disassembly and no instructions are included, which is silly – anyone with the mechanical aptitude of a tossed salad can and should partially disassemble the carbine for cleaning. Doing so requires only a 5/32-inch allen wrench to remove five bolts: two on the upper rail, one under the fore end, one in the trigger guard and one securing the bolt handle in place. The trigger guard has very minimal clearance for the angled wrench; it would be much easier if the maker had drilled a hole through the trigger guard to get a T-handled allen wrench on the bolt.

Three of these bolts screw directly into the carbine’s barrel, and I suspect that varying the tension on them when reassembling would affect accuracy or return-to-zero, perhaps the reason for Excel Arms cautioning against disassembly.

Removing the two lower bolts and the upper rear bolt allows you to lift the barrel, bolt assembly and rail from the frame as a unit; remove the upper rail bolt and the one in the bolt handle and the rail lifts right off the bolt/barrel. The recoil spring with guide holds the latter two together, and it slips on and off its retaining posts easily. No further disassembly is necessary for routine cleaning. 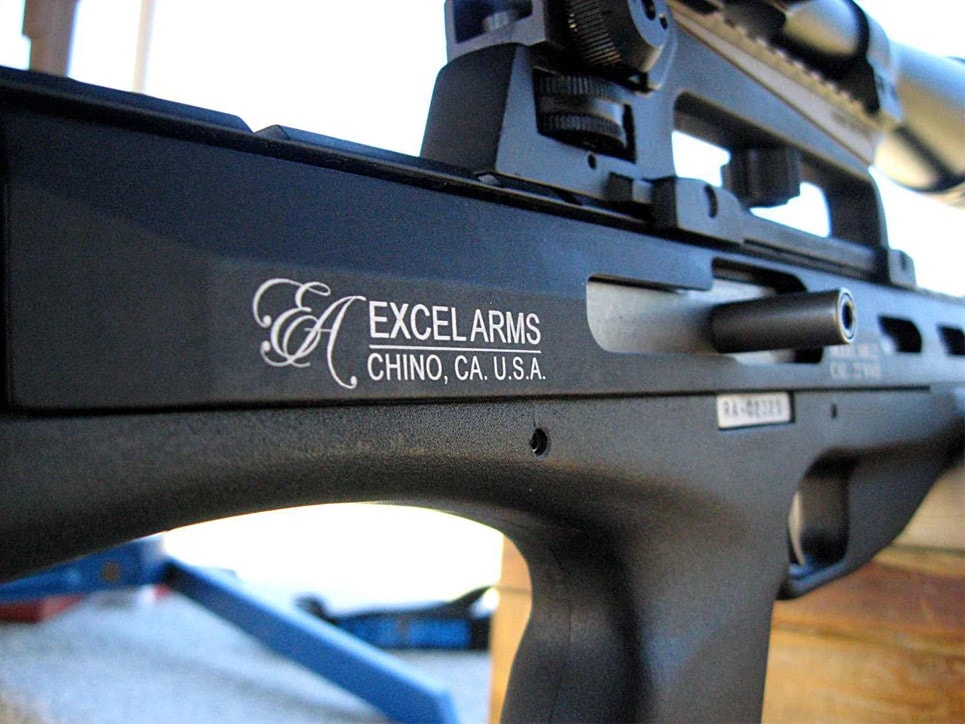 Excel Arms has reason to be proud of its Accelerator carbine; with the right load it’s fully capable of fine accuracy.

There is what appears to be a floating bullet guide at the front of the magazine well that is free to move slightly forward and backward and is retained only when the upper and lower halves of the carbine are assembled. In addition to post-cleaning oiling, the bullet guide needs a spot of grease on its underside to keep it working happily and to prevent galling, as do the bolt rails.

Though no reasonable person could complain about the carbine’s very nice accuracy, the .22 WMR chambering means I am confined to “take what I can get” factory loads, a severe restriction on someone who enjoys handloading for teasing the best from a rifle. And therein lays my regret in not asking Excel Arms for the 5.7x28mm chambering. Had I done so, I could entertain myself by handloading 5.7x28mm centerfire cartridges for the nifty little gun to wring out its best accuracy.

I’d hoped a cool New Millennium design might finally work magic on a last-century cartridge that I have never found “interesting” in the Whelenesque sense. Whether magic or good engineering (what’s the difference?), Excel Arms has done it with the .22 WMR Accelerator carbine.