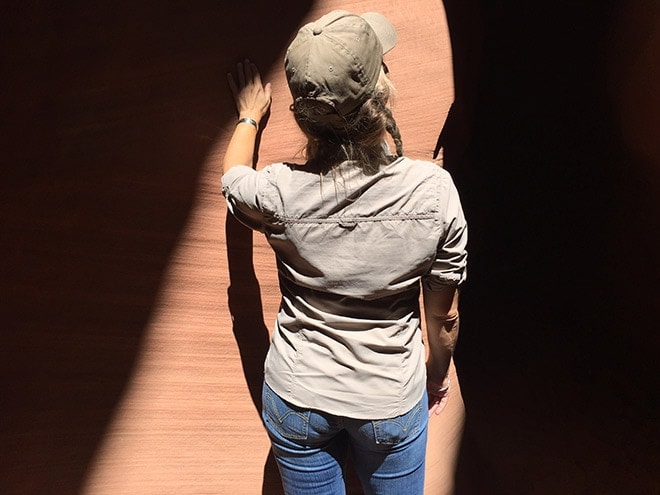 People who are serious about being effective at avoiding or dealing with violent crime, and people who live an outdoors-oriented lifestyle, generally know that there’s more to being ready than just carrying a gun. The clothes and accessories we choose can contribute to enjoyment of life when it’s good, and survival when things aren’t so good.

With that in mind, I’ve reviewed some clothing and other accoutrements of “defensive living,” as I like to call it. The results are the culmination of repeated uses in varied settings. Here’s a summary of the first two of several products I’ve been testing hard for over a year: 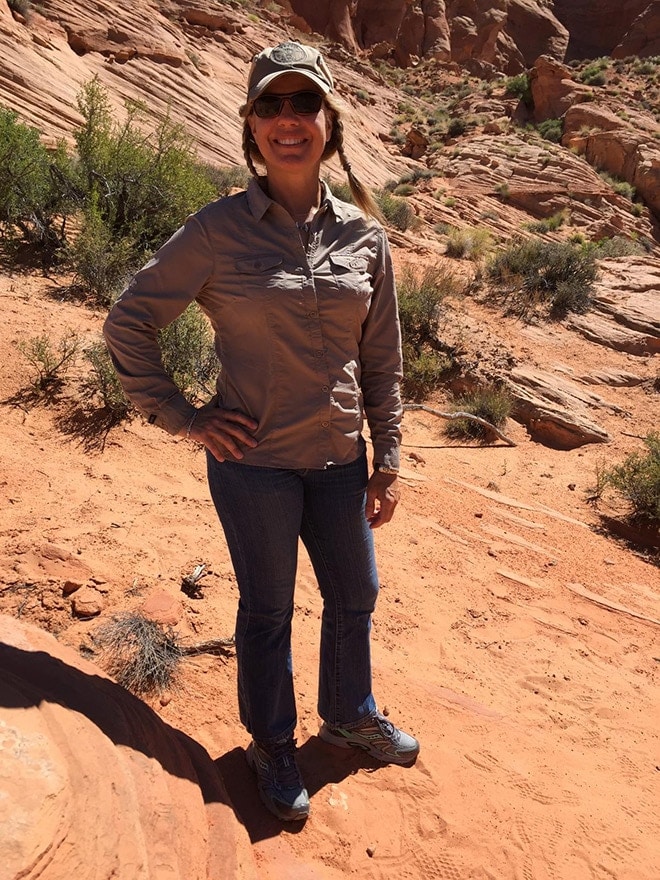 Craghoppers is a British travel clothing company that specializes in the integration of high-tech fabrics and other outdoor-friendly features into its products.  The shirt I tested is part of their partnership with National Geographic.

The shirt arrived in a soft plastic bag that had been squished down to fit into the mailbox.  It’s made of a crisp material that’s not identified on the tags.  It required an ironing to smooth it out before the first wear.  The rayon setting did the trick.

Mushroom is the color of my shirt — there are two others, one being a woodsy orange, the other a variation on olive drab.

A selling point of the shirt is its insect-repelling qualities. The fabric has been permeated with permethrin, a natural bug repellant derived from African chrysanthemums. When cared for properly, the garments in this line are guaranteed to repel insects through 70 washings.  There is no smell, in case you’re wondering. 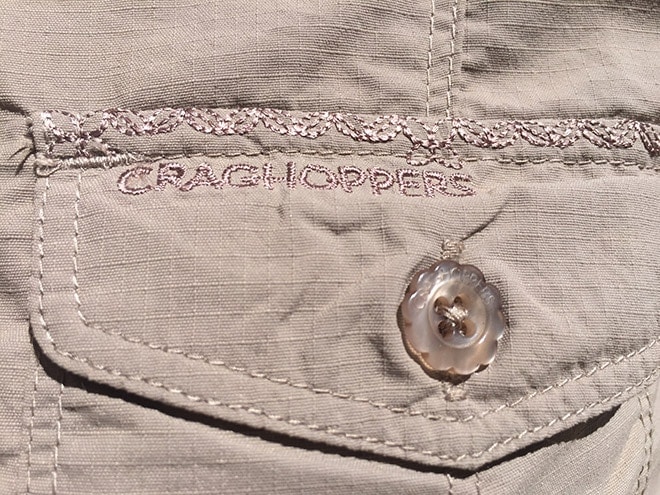 The shirt’s button-up design is made a bit more formal, safari-style, by seams that run the length of it in the front, from mid-collarbone to the bottom hem.  In back, the seams begin around the ribcage, making the shirt form-fitting for a woman’s shape.  Sleeves can be rolled up and secured with a matching tab and button. I’ve worn it that way about half the time.

The neck and shoulders are lined with a soft mesh material for sweat wicking.  It’s hard to see when worn, but each side of the shoulder panel is fully vented to allow for circulation.

Details abound on this classy piece, starting with a subtle satin ribbon trim that runs the length of the button placket.  The buttons are actually secured to the ribbon, making them virtually impossible to lose—still, there are two extras sewn into the hip just in case. The buttons are plastic and upon close inspection, flower-shaped.  A decorative serge stitch in matching, but shiny, thread tops both pockets. The Craghoppers name is similarly featured, however small, on the left breast pocket… one of a working but mostly decorative set of pockets. 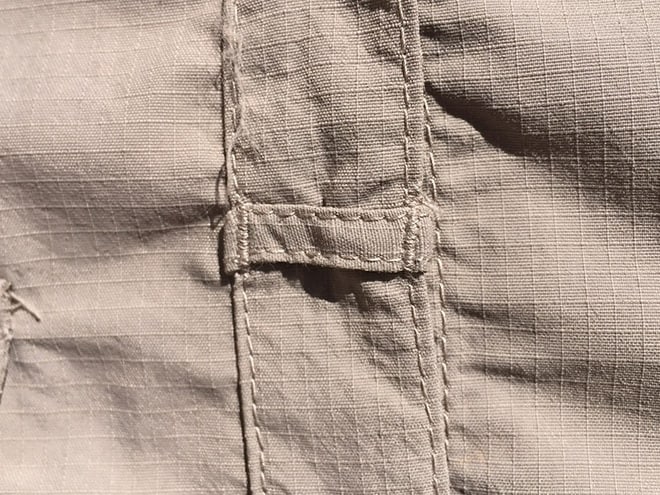 A sunglasses loop-they thought of everything. (Photo: Team HB)

Inside, there are two snap-secured loops for hanging your shirt to dry. These little features make me yearn to finally book that rafting trip down the Colorado River.

A secret pocket on the lower left side hem is secured with a zipper that’s almost invisible.  There’s a ton of room in the pocket; it’s about seven inches wide and ten inches tall.  Money and documents do get damp in there, but anything that keeps me from having to carry a purse is a winner in my book.

These subtle, classy, and practical details make for a good-looking shirt.  But how does it perform? Desert rats like myself know that covering up in the hot, dry sun is a smart move. But some fabrics are annoyingly clingy or worse, show giant patches of sweat.

A fine test was to be found in my first outing with the shirt, which began with a tour of a slot canyon near Page, Arizona around the 4th of July—which is to say, it was HOT.  The open-air Hummer our tour group took to the site on that 100-plus degree day had vinyl seats.  Stepping out of the vehicle upon arrival at the canyon, the shirt-sticking-to-back feeling I was expecting didn’t happen.  I walked in the sun for a while with my fellow travelers.  I could feel myself sweating, but the shirt stayed dry. 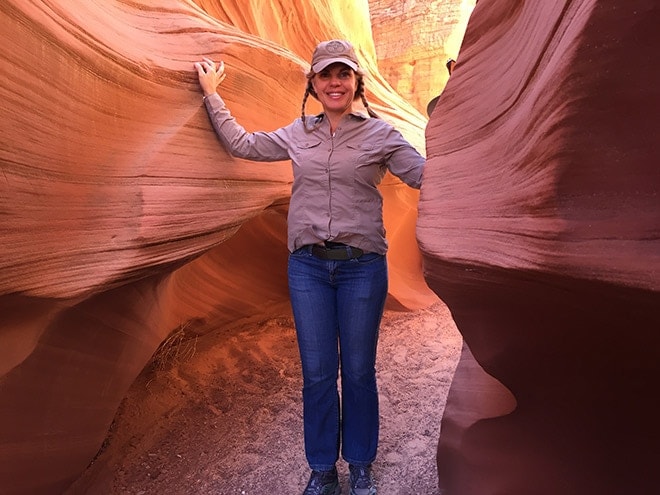 Later that day, I went for a hike that involved climbing over boulders, sliding down pebble-covered slopes, and generally being rough on the shirt.  It finished the day as it had started—dry, and comfortable, never having once restricted my ability to reach.

My one and only complaint during that initial test was that I wish it were just an inch longer in front.  I was carrying concealed, in the front of my waist, that day, with jeans that are considered mid-rise.  It wasn’t until I’d arrived home and had a closer look at the photos from that day that I could see a bit of my gun exposed when my arms were raised.  No problem had someone seen that in the great state of Arizona, but in other places, accidental exposure of a concealed firearm can mean legal trouble.

I have since worn the shirt many times on the range, shooting my AR and moving in and out of prone. It stays tucked into belted pants very well (of course my range pants have a bit higher rise than the jeans I had on during the trip).

Wearing the Craghoppers NatGeo insect shield shirt, I feel confident to do what I need to do while maintaining an approachable, professional appearance.  It could easily replace all the other long-sleeved shirts in my closet.  The $85 purchase price buys something you can feel good in and that I believe will last a very long time. 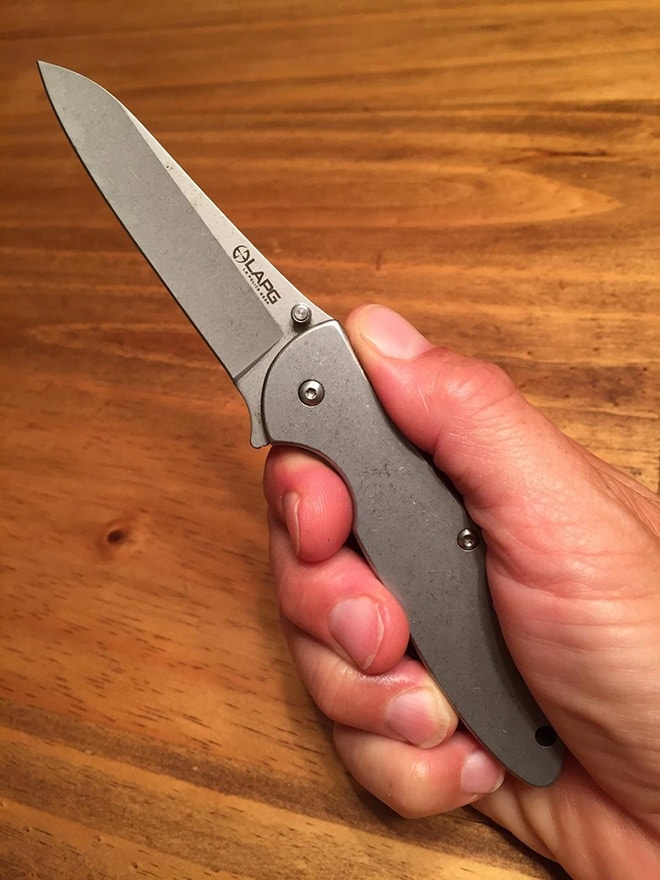 I never knew how much I needed a folder until I began carrying one in 2007.  A sharp, packable blade is immeasurably practical for more little tasks than I’d ever imagined.  It’s also a last-ditch weapon, of course.

Much as I like folders, I’m also kind of picky about them.  I don’t like bulky blades that change the way a shirt lays around my hip, or heaven forbid, cause discomfort.  I like a clip that’s high-set to make the blade as concealed as can be.  One-handed opening is important, both for convenience and safety (hostage escape, anyone?) One-handed closing is nice too, albeit a bit risky with any folder.

LA Police Gear carries a plethora of store-branded, economically priced blades. I’m lucky enough to own the Phantom, a drop-point folder with no serrations on the blade. I’ve seen it on sale for $7.99!  It sounds too good to be true, until you know that LAPG has some serious value in its store-brand knife collection. 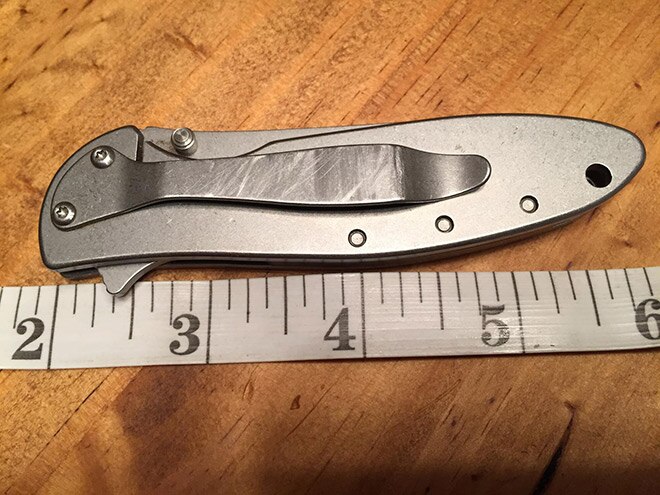 The Phantom has a brushed stainless finish. Over the year, the clip developed a less shiny and more varied appearance as it has an inward curve that keeps the middle of it from contacting clothing and objects, while the lowermost part is exposed to whatever is around.  This bit of aging has made the stainless finish darker and more subtle, which I like.  Attention getting is not the goal of defensive living accessories. 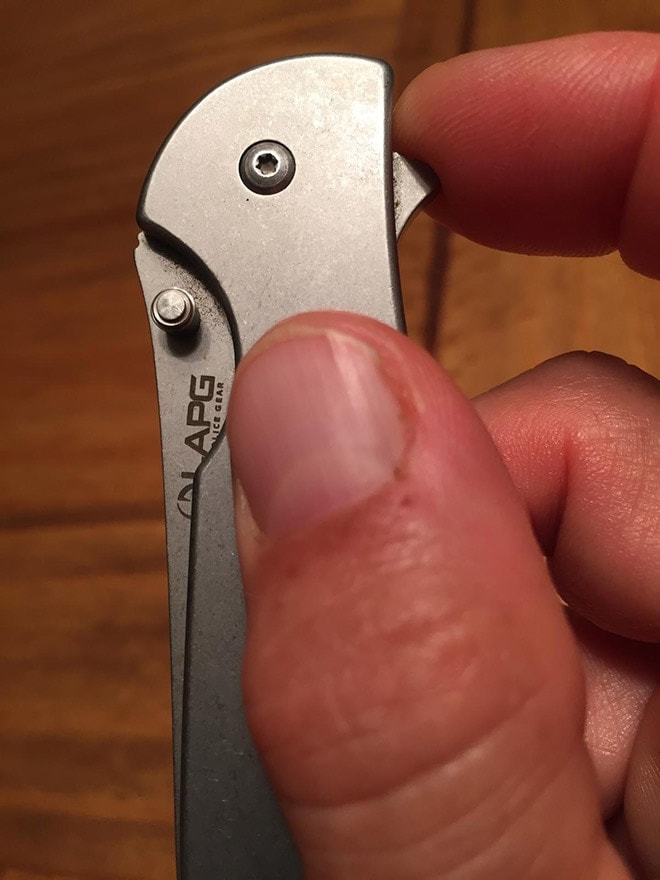 The gravity assist blade is opened by depressing this protuberance. (Photo: Team HB)

This knife is also very slender, just a little more than 3/8-inch wide, making it comfy even in the pocket of snug jeans.  The clip is anchored at a slope at two points, 1/8 and 1/4 inch from the top, making it one of the deepest-riding knives I own, as well as helping it ride at a great angle that’s accessible and comfortable for front-pocket carry. It’s not once come loose from my waistband, front pocket, or cargo pocket this summer. For those who like a lanyard, there’s a hole for one.

A bump protrudes on the back of the blade, making opening a snap (well it sounds like a snap), due to the human-assist factor. There is no spring assist, but with a quick press of my index finger, it opens as fast as any spring-loaded model I’ve come across. The frame flexes to block the blade from folding closed unintentionally.  With a little practice, it’s perfectly closeable with one hand, but please maintain a feel for what you’re doing if you, like me, fold your knife in this less-than-professional manner! 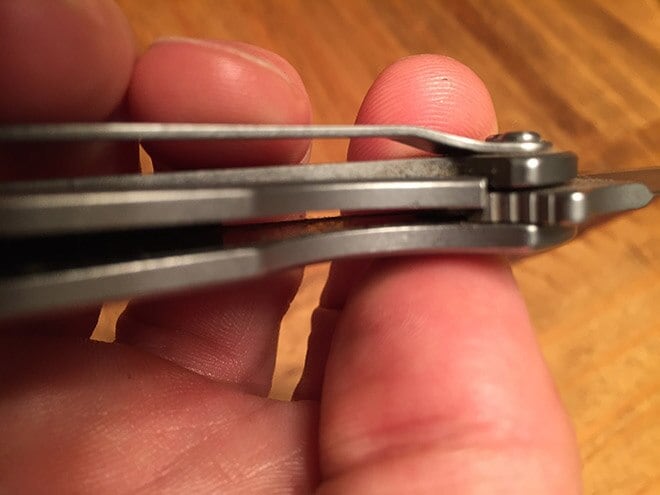 The blade is tough for everyday use.  I’ve done a lot of daily tasks with the Phantom, but its most frequent job is popping large staples out of cardboard target backers.  Despite the repeated steel-on-steel work, I can detect only one little nick on the edge.  It takes a sharpening well and stays plenty sharp for cutting things like paracord and twine.

Although the Phantom appears to be selling out, LAPG carries many more blades that are perfect for EDC, camping, hunting, or whatever you like. These are great entry-level knives that will serve the user well without breaking the bank.