Looking for a .45 ACP with a bit more of a tactical flare than your average 1911?  Want a pistol that you can build on, one that comes from the factory with many of the ammenaties typically found on custom guns?  FNH USA has built an aggresive version of their popular FNX pistol that takes the platform to the logical extreme.

The FNX-45 Tactical is ready to go

The polymer frame is heavily textured.  The steel rails that the slide rides on are replaceable, should they ever need serious maintenance.  The back strap is interchangeable, depending on what size and texture you might want. 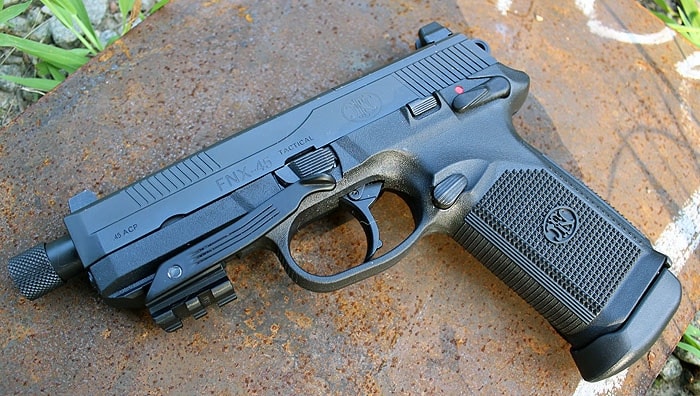 The slide is serrated on the front and back end.  The stainless steel is finished in a matte black that compliments the flat black tactical look.  The extractor is on the outside of the gun and it has a loaded chamber indicator.

The FNX-Tactical’s rail section is long enough for the addition of many available lights or lasers.  (I’ve got a SpeedLedge on this gun.  I’m working on a review of this unique add-on.  More on that soon.)

The FNX-Tactical’s safety functions like a 1911, except that it includes a decocker.  It is ambidextrous and works well, despite being a bit smaller than I’d like. 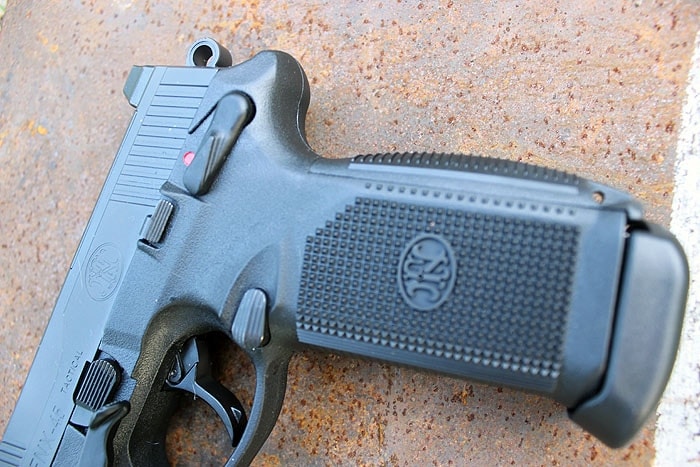 The magazine well is flared slightly and the release button is also ambidextrous.  The texture of the button stands out nicely against the rest of the various grip textures and it is easy to find and identify.  The slide drop is also a bit under-sized.  I’d like a larger lever, personally.  The large double stack grip makes it hard for me to drop the slide without shifting my grip on the gun significantly. 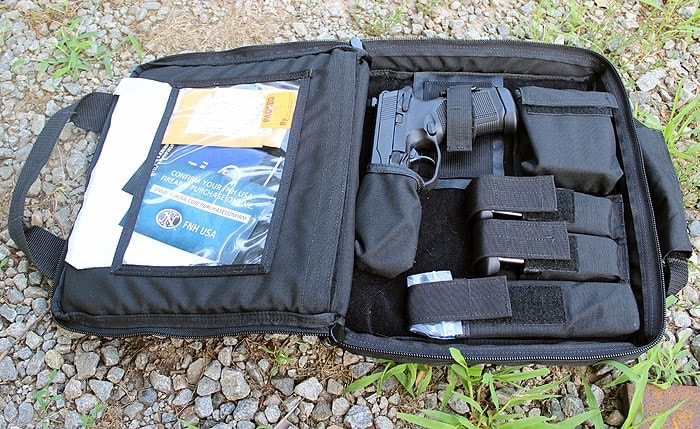 The FNX-Tactical comes in a nice soft-sided case.  The case is large enough to hold the gun, three magazines, all of the extra pieces and parts (like back-straps and optic mounts), and a silencer (or the cable lock that comes with the gun).

The nickel coated steel magazines are fat.  They hold 15 rounds in the traditional double stack pattern, but also have a wide bumper on the base.  This bumper makes pulling the magazines easy, and gives a nice solid base to hammer the magazine home. 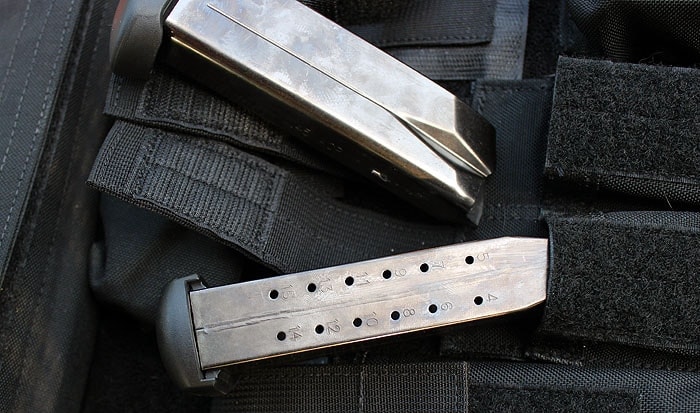 The sights on the gun are elevated to accommodate the height of a silencer.  We have a Silencerco Osprey on the FNX in the video, and the sights are more than sufficient.  The Osprey is really designed to use with normal sights.

These large sights and the rail and the extended barrel will make finding a holster a bit more challenging.  But as this gun gains in popularity, those holsters will become much more readily available.

As for the sights themselves, they are Trijicon night sights.  They glow sufficiently well.  The combination of the three-dot pattern and the wide serrations makes for an interesting pairing of speed and accuracy.  On a fast draw, the FNX is more than capable.  With the ability to aim more carefully, it is bulls-eye accurate.

The gun also comes with a pre-milled slide.  Just in front of the rear sight, a cap covers a red dot base.  The gun comes with two mounting plates that will accept the most popular red dots.  We used the Trijicon RMR, which aligned perfectly with the iron sights.  This is a trend that’s developing in the industry and it makes the addition of red dot sights much easier.

This gun does everything you’d want it to.  Within typical pistol ranges, the FNX is exceptionally accurate.  The weight of the gun allows for easy management of recoil.  With the Osprey on the gun, the balance shifts forward and muzzle-flip has more of a wave like feel.  Without it, the gun bucks a bit, but the speed of the slide returning forward pulls the gun down so rapidly that repeat target acquisition feels lighting fast.

The only thing that required practice was the trigger, but that’s typical for most guns and the FNX is no different.  The double action pull is stiff, but easily gauged once you know where it breaks.  The single action pull is crisp and functionally light. 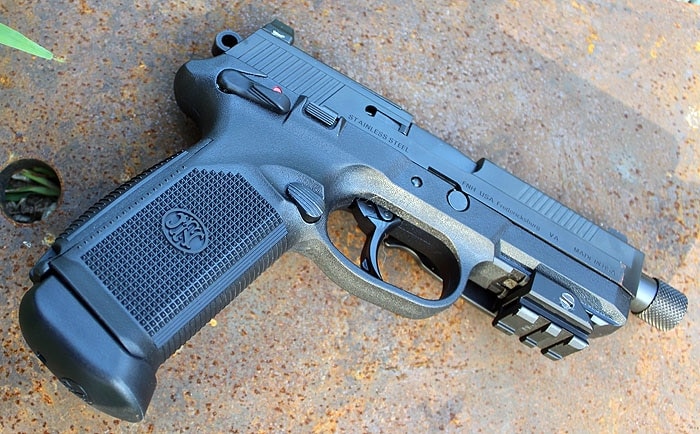 The FNX-Tactical has an MSRP of $1,399.  The retail price seems to be coming in lower, closer to $1,000 for the black model and $1,100 for the desert tan model.  At that price, this is a lot of gun.  But keep in mind that you’ll be spending a bunch of money on a gun like this.  While it works perfectly fine without them, the FNX begs for more.  And after a light, a laser, a silencer, a red dot — it is going to be a significant investment.