Revolvers are akin to lightsabers. They’re both considered outdated and inferior to the younger generation of weapon enthusiasts, but in the right hands are incredibly deadly.

The modern revolver is double- and single-action, fires a .357 Magnum round and carries six rounds in its cylinder. There were multiple mutations and evolutions that lead to the current revolver design. Some designs were abandoned with the introduction of smokeless powder, while other designs were impracticable without the invention of modern CNC equipment. In this piece, we’ll take a look back in time at the revolver’s family tree and reexamine the evolutionary dead-ends that — with the help of modern technology – should make a return.

Two words: ergonomics and economics. The design of the Leavitt Belt Revolver’s frame is the definition of simplicity. Replace the grips with rubber or plastic and the percussion ignition system with a modern metallic cartridge one and you’ve got a cheap reliable everyman’s gun.

It may not be the lightest pistol and the reloading system would have to be redesigned, but the basic design with current advances in metallurgy could make the Leavitt gun very light and handy.

Milled belt-fed repeater? You scoff, but you have to admit it’s cool. (Photo credit: CivilWarTalk.com)

Although the Harmonica gun is not a revolver, it’s an interesting solution to the limited capacity of revolvers.

The Harmonica gun keeps its ammo in a magazine that is comparable to a flattened cylinder of a revolver. This made the Harmonica gun heavy, imbalanced and difficult to holster or conceal, but the concept is pretty cool.

The magazine advances from one side to the other — much like an old typewriter. This might not be practical, but it would be interesting to see what improved technology, case-less rounds and a disintegrating magazine would do for the Harmonica gun, especially if the gun feed from the bottom and disintegrated before the magazine blocked the iron sights. 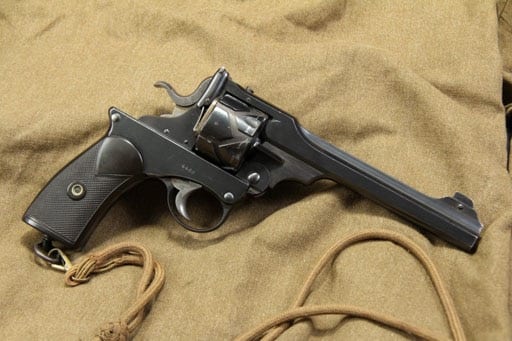 How awesome are Webley revolvers? Anyone ever hear of a flick called “Zardoz.” Well, steer clear. Unless you like seeing a youngish Sean Connery walk around in a red-leather cod piece and belts while toting a Webley revolver.

Auto-ejecting revolvers like the Webley or Smith & Wesson Model 3, propel spent cartridges as soon as the action is opened, much like a double-barreled shotgun. The metallurgy at the time of the Model 3’s introduction wasn’t sufficient for modern handgun cartridges. That should not be an issue in modern times, as evidenced by the MP412.

With a lever to help cock multiple hammers, the multi-barrel revolver can work. (Photo credit: RockIslandAuctions)

I am including these repeating arms together because combined they could make something truly incredible.

Imagine, like the Ludovici revolver, a pistol that fired three rounds of .22 LR simultaneously, without the huge cylinder. How? Three barrels with magazine tubes underneath them, like the Volcanic pistol. The shooter works the small lever and chambers three rounds at a time. This would overcome the girth issues of the Ludovici while remedying the capacity problems of the Volcanic.

Too bad under current NFA restrictions a firearm that fires more than one round at a time (with one pull of the trigger) is automatically a de-facto machinegun.

Nine shots not enough for you? What if I throw in a 20 gauge shotgun? (Photo credit: CWReenactors.com)

Judge, step aside. Your .410 shotshell is plenty powerful for dispatching vermin and dissuading muggers by peppering them with a pinch of projectiles, but the granddaddy of revolver-shotguns, the Lemat, has you out-classed with its 20-gauge shotshell and nine rounds of .42 caliber pain.

Envision, with modern manufacturing, a 12-shot .357 Magnum X-Frame Smith & Wesson revolver with an underslung 20-gauge shotgun barrel. Sure, the NFA restrictions of short-barreled shotguns would make buying this a pain, but who here wouldn’t love to get their mitts on one of those? With an 8-inch barrel you could stalk wild boar and have an emergency back-up 20-gauge slug. Come on Smith & Wesson, make my day!