Whether it’s a Winchester, Marlin, Henry, Mossberg, or some other brand, lever action guns seem to appeal to just about everyone.

Maybe it has something to do with America’s fascination with old Western films, or maybe it’s because they really are versatile guns great for hunting most game, plinking, or even self-defense. Or maybe it’s just because they’re cool—that’s my reason at least. But out of all of the lever-action brands and styles, which one is the best?

Personally, I say the Marlin 336 takes the cake.

In my experience, more often than not, whenever “lever actions” are mentioned early on in the conversation someone expresses love for the Marlin 336—and rightly so. Marlin has specialized in the manufacture of lever actions for ever, and produces the model 336 in 30-30 or .35 Remington, which are stellar rounds for the design. But so do a lot of other companies, so that’s not what makes the Marlin 336 my favorite.

Five reasons to choose the Marlin 33

Starting out, the Marlin 336 features a side-eject rather than a top-eject like the other brands, so you don’t have to worry about burning-hot brass hitting you in the forehead and contaminants entering the receiver. While I do not plan to ever put a scope on my own 336, I have the option. And options are good.

One exception is the old Mossberg Model 472 30-30 lever gun, but very few people know it exists, anyhow. It was produced in the ‘70s and early ‘80s for Montgomery Ward and did, in fact, utilize a side-eject for the casings. It looked so much like the Marlin 336 and is rather difficult to tell the difference from a picture. They are almost identical. I own a Marlin and it could trick me.

The Marlin 336 weighs one-half-pound more than the Winchester 94, which benefits the shooter with less felt recoil. Though it’s a tad heavier, it’s still not enough to make a noticeable difference.

At seven pounds, the Marlin 336 is by no means a tank. Besides, should you run out of ammo, the 336 makes a more effective bat due to its extra mass. Just kidding on that last part—kind of.

The Marlin 336 is also offered with either a straight stock (such as the Texan models), or “pistol grip” stock, which some shooters feel provides a more comfortable and safe way to hold the gun.

The Winchester 94 and Henry lever guns, as far as I know, are offered only in straight-stock configuration. I don’t know about you, but I like having choices. Furthermore, straight and pistol-gripped stocks for the 336 are easily interchanged should you wish to experiment with different styles. 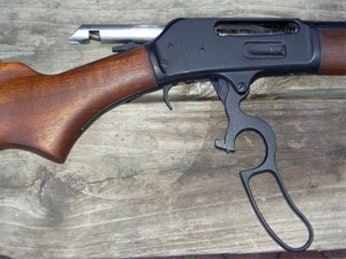 Another reason why I prefer the Marlin 336 over the other guys is the lever action itself.

If you have ever worked the lever on a Winchester 94, for instance, then you have seen how much of the internals actually come out of the gun when you do so. The Marlin incorporates a much more simple and, in my mind, reliable and sturdy design.

Also, taking the Marlin completely down can be done with only a couple tools, whereas the Winchester 94 requires gunsmith skill to fully take apart.

Used Marlin 336 carbines are typically priced far below a comparable Winchester 94. I’m in California where guns tend to be more expensive anyhow, but the average gun show price of a Winchester 94 is in the $1,000 range, where the Marlin 336 can be found all day long for $500 or less. That means you get the same or better quality, and the same caliber, but with a lower price.

If you are in the market for a lever gun but aren’t sure which way to turn, I highly recommend looking into a Marlin 336, no matter which caliber or barrel-length you are considering.

They are rugged, they are easily worked on, they can be scoped, and the price tag is nice. Now, the other guys also make great stuff, but in my opinion, you can’t go wrong with the Marlin 336.