You can talk about the FN Five-seveN pistol without getting into the debate about the 5.7x28mm round, but what’s the point? The gun exists to shoot this strange little round. And there’s a lot of controversy surrounding both the round and the gun. Rumors of ridiculous black-market prices for Five-seveNs in Mexico. Allegations about the projectiles armor piercing abilities. Politicians challenging folks at the NRA to test out body armor—it is some good reading.

But this isn’t about the controversy. I’m here today to talk about a gun. And I’m already tired of typing FN’s cutesy Five-seveN, so I’ll write it “Five Seven.”

What is the Five Seven?

The Five Seven is a tactical pistol originally designed by FN of Belgium for use by NATO forces. At one time, NATO had plans for replacing the 9mm round and the 5.7x28mm was FN’s answer. With it came the P90—a radical submachine gun—and the Five Seven was to be the P90’s sidearm. Makes good sense, right? Like having a Winchester that will eat up .44-40 Winchester to go with your Peacemaker. Did I mention that FN owns Winchester? Browning, too. 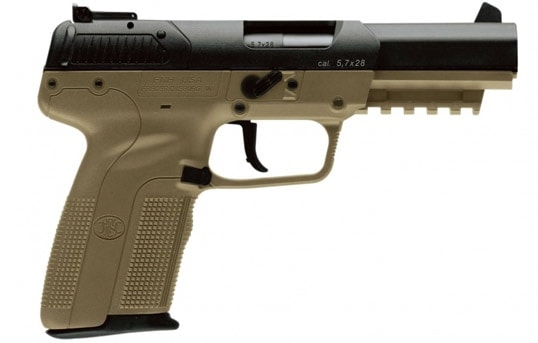 So this pistol has its roots in the military, tactical tradition. And it’s easy to see. Low profile combat sights. No frills aesthetic design. A built in rail. The Five Seven is a striker fired, single action only pistol, but it lacks the exposed hammer of the 1911. The safety is on the right side of the frame and is specifically designed to be swept down by the trigger finger as the shooter moves the finger from the frame to the trigger. 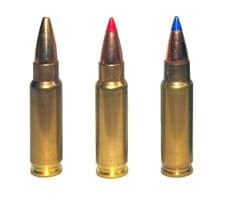 While the safety and the single action only mechanics take some getting used to, the learning curve isn’t that steep. The Five Seven is ergonomic, which makes up for its lack of looks. And it comes in a variety of colors, each designed to camouflage the gun. Having spent some time with the thing, I understand why. But the Five Seven comes with three magazines, and each holds 20 of the little bottlenecked rounds.

The 5.7x28mm round is a strange pistol round. It feels like a small rifle cartridge. It’s bottlenecked and the bullet is small. The company makes some striking claims about the 5.7x28mm. It turns out great muzzle velocities. It has a very long, flat trajectory. The diminutive size of the bullet itself helps with the velocity.

Conversely, the light projectile is supposed to lessen the down range collateral damage. So it goes where you want it to, and fast. But if you miss, it doesn’t have the same thump as the 9mm, or the .45 ACP.

And it is sharp. In a world dominated by the hollow-points and bulbous round nosed full metal jackets, the conical 5.7×28 really stands out.

It is a really smooth gun. The mechanics of the Five Seven are highly functional. The slide to frame fit is very nice. The frame has the expected attention to grip built right into the frame. As it is a single action only gun, the trigger pull is consistent from the first shot to the last. And the recoil is really low. That alone might have been the most pleasing aspect of shooting the Five Seven. At just over eight inches, the Five Seven has the feel of a full sized pistol. Yet, the kick is noticeably half of what you’d expect from a 9mm. The gun jumps a bit, but the muzzle flip is minimal.

And this makes for really accurate, fast shooting. The Five Seven I shot belongs to the Dominion Shooting Range in Richmond, Virginia. I’d gone to the range to do some write-ups on a few 1911’s and I wanted something different, just to compare. I figured the Five Seven might serve to represent the latest in military sidearm development. And it did.

When I shoot the 1911—no matter how tightly I grip the gun—I have to settle myself, aim, and pull the trigger again. I can do this reasonably fast. It feels like I’m fast, but I’m not. The gun is fast. It flies. And I can hold it down. The biggest obstacle to target acquisition was the bright muzzle flash against the dark backdrop of the range. I lost the target for a split second between each shot—but the gun stayed on. 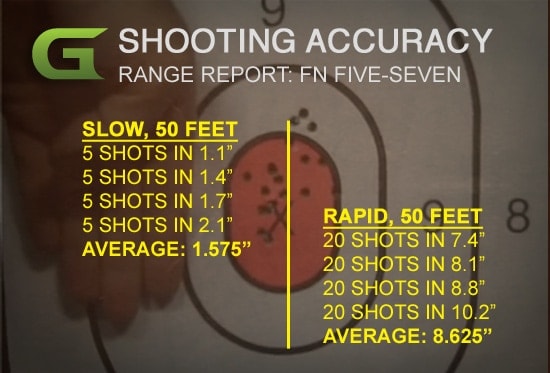 These sorts of results are weirdly rewarding. After the eight rounds afforded by the 1911’s, I had to stop and take a break to reload. The FN brought back memories of an old Beretta 92FS I once owned (a decommissioned police pistol with a 20-round magazine).  But the Five Seven was so much easier to control that I hesitate to make the comparison.

And there was no hand shock to speak of. There was no hammer bite. My thumbs didn’t feel blistered from squeezing rounds into stiff magazines.

I can’t really say that I have to have a Five Seven. While I really like the way it performs, it is clearly designed for tactical use. If I were in law enforcement, I’d want one. The gun seems to be a no-nonsense, well thought out weapon. It is reliable, functional, and easy to control. The round is effective at close range and at long range. And it weighs almost nothing.

There are two things that concern me, though. The first is the proprietary nature of the 5.7×28 round. FN makes the gun and dominates the market for supply of the ammo. Unless the usefulness of the round becomes more widely accepted, other manufacturers aren’t going to be making 5.7x28mm ammo or guns that use it. But the benefits of it should be clear enough. One high-performance round for the rifles, submachine guns and sidearms.

The other is the cost of the gun. While the FN is a fantastic firearm, it is expensive. I think FN’s objectives are clear enough. The Five Seven isn’t intended as a civilian gun. They are courting law enforcement contracts. That’s where Herstal group makes its money.