What constitutes an effective self defense round? A contentious topic in the firearms world, the two main schools of thought center on velocity versus projectile weight. Some believe light and fast rounds with their reduced recoil and enhanced penetration are the key to stopping would-be aggressors. The other side insists that slower, heavier rounds better impart their kinetic energy into a target and provide superior stopping power.

On the extreme end of the light and fast school of thought is the FN Five-seveN pistol chambered in 5.7x28mm.

This Five-seveN is a locked breech, magazine-fed single-action only semi-automatic pistol made in Belgium that makes extensive use of polymer in its construction. With a JJ Abrams-esque appearance that makes it look more appropriate on the hip of a Stormtrooper than a state trooper, the Five-seveN’s design is evokes polar responses from shooters. Though it isn’t the gun’s construction or design that makes it noteworthy. Its namesake caliber separates it from the vast sea of 9mm, .40 S&W and .45 ACP handguns. 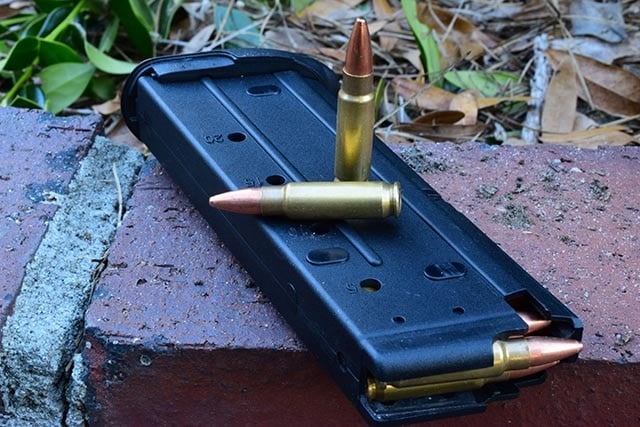 The Five-seven uses a 5.7mm high-velocity round that looks like a scaled-down .223 cartridge. (Photo: Jim Grant)

Traveling at up to 2,800 feet per second, the aggressive-looking 5.7mm round is the result of NATO’s attempt to standardize a personal defense weapon cartridge. What makes this round so special is its combination of low recoil impulse and ability to defeat light body armor.

Unfortunately, civilian access to proper military specification ammo is limited. On top of that, the price of 5.7mm ammo is substantially higher than more common calibers. So why would a shooter choose the FN Five-seveN over a different handgun in a more common caliber?

The 5.7mm cartridge offers numerous advantages over more traditional calibers even absent the mil-spec ammo. While it no longer has the capability to defeat light body armor, its small size and light recoil means that the FN pistol holds more ammo than most handguns, and can deliver them faster with less felt recoil. In fact, the ultra-high velocity of the cartridge allows shooters to easily make hits on man-sized targets at 50 yards. 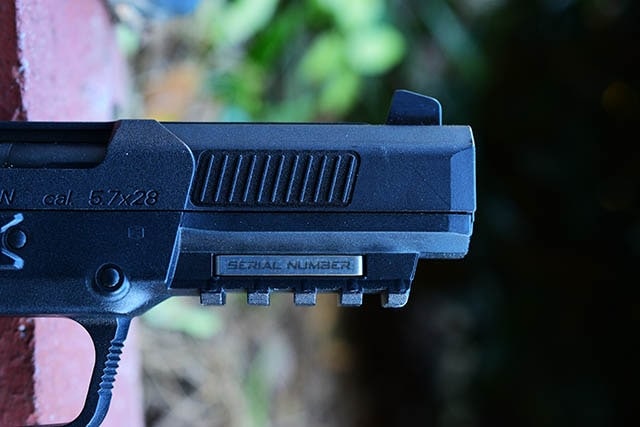 Shooters can use the railed dust cover to attach a tactical light or laser to the FN (Photo: Jim Grant)

While the ammunition may be the star of the show, the pistol does have some notable features. Despite its rounded-Glock, striker-fired appearance, the Five-seveN is actually a hammer-fired, single-action only pistol. It features a railed dust cover, aggressively checkered grip and ambidextrous safety. The safety resides in a strange location above the trigger. Shooters accustomed to more traditional safeties will find its location off-putting. However, after a few hours with it will find it’s easy to manipulate with the index finger while maintaining a proper shooting grip.

After 500 rounds of Federal 40gr FMJ and 100 rounds of FN SS197SR ammo with no failures whatsoever, the weapon has proven itself reliable with factory ammo. Satisfied with the Five-seveN’s reliability, I decided to do an impromptu ballistic test of the 5.7mm ammo.

I attempted to test the myth that the high velocity 5.7mm round over penetrates too much to be an effective self defense round. Firing from 10 feet at trees of various thicknesses, the round failed penetrating trees as thin as 8 inches with 40-grain FMJ. Wood and bark have different sectional densities than human tissue, but this still demonstrates how overstated its penetrative abilities are. 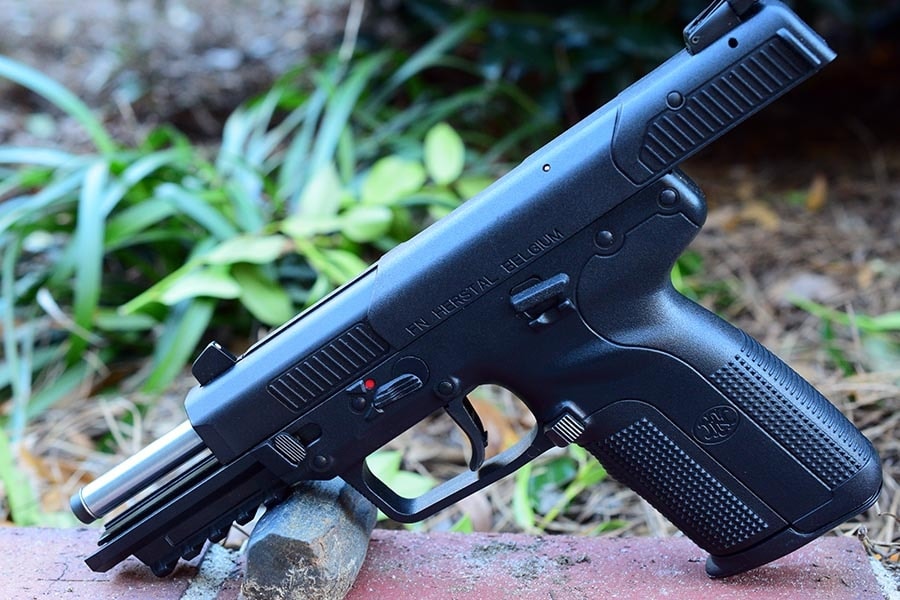 Slide-lock is one condition shooters will rarely see with the Five-seven, thanks to its 20-round magazine. (Photo: Jim Grant)

The FN Five-seveN pistol performs like a target pistol, grouping 2 inches at 50 yards when shot from a rest. The flat-shooting nature of the high velocity round makes distance shots effortless compared to common handgun calibers. Often compared to .22 WMR, the 5.7x28mm round is referred to a gimmick over-gassed .22LR by its detractors. By this same logic, the .223 round is also a super-powered .22. While I can’t comment on its effectiveness against human targets, the 5.7mm round is devastating against raccoons and squirrels. More impressively, these kills were achieved at 30 plus yards with a pistol. 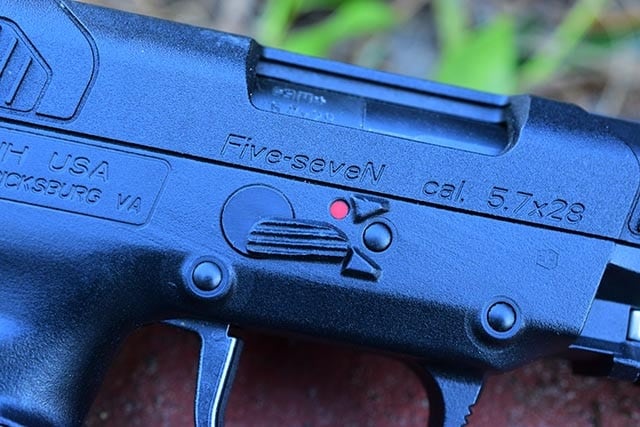 The Five-seven’s safety is located above the trigger guard. (Photo: Jim Grant)

The ergonomics of the gun are fairly good despite the aforementioned safety’s unconventional location. After some extensive shooting however, the placement makes sense. It allows the shooter to actuate the safety with their index finger without shifting his or her proper shooting grip. The magazine release is stiff, but positive and difficult to accidentally press. Cocking serrations on the slide are aggressive and effective with the rear of the slide featuring extra wide cocking ears that give shooters positive grip when racking the slide.

Five-seveN ergonomics are perfect with the exception of the grip’s depth. Necessary to facilitate the extra-long 5.7 cartridge, it makes the trigger just out of comfortable reach for small-handed shooters, especially glove-wearing ones.

With an MSRP of $1,349, the Five-seveN pistol is not for the thrifty and neither is its ammunition. Full metal jacket ammo runs about 40 cents a round, making practice very expensive. That said, the FN Five-seveN makes a good target pistol that doubles as a defensive weapon even for a new shooter, assuming they can afford ammo. The ballistics might not be as battle-proven as 9mm para or .45 ACP, but given its light recoil and capacious magazine capacity, the FN Five-seveN is still a serious combat pistol.