Someone in the upper echelon of FN’s administration must have first seen the P90 in a dream. It looks like the type of good idea that someone begins by pushing around macaroni noodles because they’re bored by the dinner conversation and then sketches on a napkin. Later, the whole mess is given to an engineer with the command, “make this happen.” The result hardly looks like a gun. The P90 5.7×28 Personal Defense Weapon looks like technology.

Many of the features we take for granted are way out of place on this gun. The magazine sits on top of the gun. It doesn’t feed from the top of the magazine, but by twisting the rounds and spitting them out one side. The rounds are chambered from the top and the empty brass is ejected out of the bottom. The bull-pup action is well behind the trigger, built into the stock. The whole apparatus is rather slab like. And the barrel pokes out the end just a bit.

At first I thought it looked a bit silly. But FN Herstal makes weapons of war. The guns they build are at the cutting edge of military technology, and the P90 demonstrates this. The P90 I put through its paces belongs to the Dominion Shooting Range in Richmond, Virginia. There, where it hangs a wall with a hundred or so other guns, the P90 looks like the pinnacle of firearms development.

The P90 was developed specifically for use with the 5.7×28 round. I’ve already written about the FN Five-seveN, the pistol that uses the same round. The pair makes an effective combination for duty carry.

The P90 is short enough to be carried in the way many carry guns with folding stocks. Yet, it is ready to fire immediately. The 5.7×28 round is supposed to have a flat trajectory at 200 yards. This gives the P90 an astounding range for a gun so compact.

Getting Know the P90 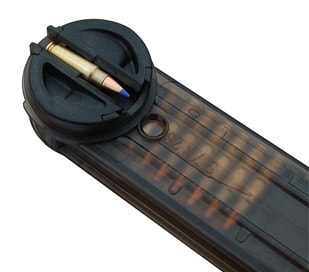 The P90 I used for this evaluation was the real deal. FN offers a civilian model, the FN PS 90, with a 16-inch barrel and a 30 round magazine that only fires in semiautomatic mode. But I tested the fully automatic version—900 rounds per minute, or 15 rounds a second, which means the gun is empty in less than four (expensive) seconds.

While it takes a minute to get the feel for the gun—the strange grips, and rather unique sight picture—everything is ergonomically efficient. There was much less of a learning curve than I expected.

My hands fit very well on the grips, one of which is a huge tubular trigger guard. The charging lever is intuitive. The sighting system is very natural—a red dot and military sights.

However, the only thing that really tripped me up was the magazine. The first one I put on hung up on me. I don’t think it was the gun’s fault at all—I just didn’t seat it firmly. This would have been apparent to me on most guns when the magazine slid out and fell to the ground, but it took me a moment to figure it out. Again the magazine sits on the top of the gun and lays horizontally.

The gun did exactly what it was supposed to do. The individual shots were right on target and recoil was negligible. 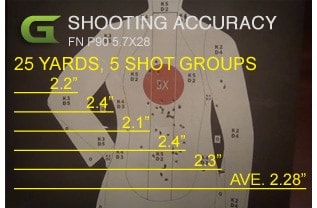 The P90 has a unique trigger. If you pull it back to its first break, it will shoot one round. Squeeze the thing down and it opens up in full auto. Shooting three to five round bursts allowed for immediate re-targeting. And with 50 rounds in the gun while shooting bursts, it didn’t empty out nearly as fast as many of the machine guns I’ve shot.

The most apparent difference it had from other submachine guns was the ejection of spent brass. It fell at my feet, out of sight. And the P90 didn’t get hot—well, I’m sure it did, it just wasn’t as dangerously apparent.

My only problem was that the gun is so compact that I had trouble shouldering it. The stock is built for use with body armor, so squeezing in up to my large frame felt a bit strange.

Shooting braced at 25 yards, the P90’s accuracy was fine.

Shooting short bursts on a silhouette, I could keep 25 rounds in an area smaller than my hand. Running full auto, in longer bursts, all but three stayed in the target’s center mass.

How do you compare this to anything else?

Typically, I like to compare the gun I’m evaluating to its major competition, but I’m not sure what to do with the P90.

FN makes so many different weapon systems—most of them fulfill big government contracts. But for the rest of us? Short barreled AKs? The variants of the AR platform that allow for convenient carry? Even when such guns shoot similar ammo from guns that are similar in size, the comparison list is short. The contrasts seem obvious.

I can see so many logical military and law enforcement applications for the P90. The gun is ideal for the urban environment and versatile in almost any environment. The gun has both close quarter combat potential and surprising open range accuracy. The tiny 5.7×28 round is light and easy to carry. And if there is some governmental agency paying for the ammunition, then my only real hesitation disappears.

I like my job. I get access to guns that I’ll never own—for any number of reasons. It is fascinating, from an intellectual perspective, to shoot guns that aren’t usually available to civilian shooters. I learn so much about what many others must take for granted. And my preconceived notions are often shattered. I’m a traditionalist. I didn’t think I would like the P90. But I do. And while I don’t have much use for one, thankfully, I’m pleased that FN is as innovative as they are. I’m comforted, in a strange way, by their relationship with our armed forces. They are getting some brilliant weapons to work with.