For Things That Slither: Guns and Shotshells for Snakes

If you spend enough time out in the woods, eventually you will cross paths with a snake, and in some of those places the snakes will be more than just the garden variety.

Even here in the Adirondacks we get the occasional rattler and, once you see one up close, the raised hairs on your neck will perhaps emphasize the importance for protection i.e. a “snake gun,” which today most likely means a handgun that fires shotgun shells.

So do you need to run right out and buy a Taurus Judge or Smith & Wesson Governor? Of course not.

My first encounter with a rattler was on a hiking trail in the remotest part of the Adirondack Mountains. I was at least three miles from my car, and then I was another five or six miles from the nearest town of any size, and in a land where cell phone service doesn’t exist. I was walking along and a small rattler glided by no more than a foot or so in front of me, and was gone before I could even get my hand to the butt of my revolver, all the while my eye were glued to the tell tale rattle on his backside.

With the snake’s movements being so quick, shotshells are almost necessary unless you catch them coiled or standing still. I used to catch snakes as a kid and can tell you that very rarely are they going to stay put for you. 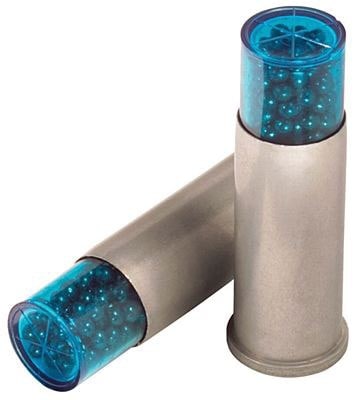 But the thing is (and what we tend to forget becaue of the sexy marketing of the Taurus Judge and Smith and Wesson Governor), you can buy shot shells for most of the popular cartridges out there and they’ll fire adequately.

CCI offers those in 9mm, .38 Special, .40 S&W, .44 Special, .45 Auto, and .45 Colt. They also offer a shot shell load in .22 Long Rifle and .22 Magnum, but these are very light in # 12 shot and I don’t recommend these on snakes. I have seen them used on chipmunks and red squirrels and one has to be right on top of the animal and even then death is not always instant, something you certainly don’t want is a wounded and irate rattler or other venomous snake.

If you reload your own ammunition you can buy empty shot capsules from Speer in .38 Special, .44 Special, and .45 Colt. You can load these up with #9 shot or something else if you prefer, but I would consult some reloading manuals before you try anything exotic. So, how do they perform? I decided to try out some of the .38 Specials since I usually have a .357 Magnum or .38 Special on my hip when I am out walking and these are the smallest next to the 9mm that are offered in a centerfire round.

I picked up some a box of CCI shotshells and also loaded up some of my own using some empty capsules and #9 shot with a mild load of 5.0 grains of Unique. The key when loading the shotshells is to use just enough of a crimp to hold the capsule in place without cracking it or crushing it. Also pay attention to the overall length of the round so that it doesn’t bind up your cylinder. 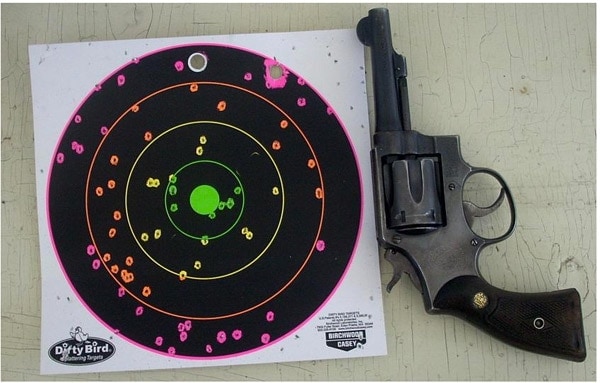 I tested my handloads out using a Smith & Wesson M&P .38 with a 4-inch barrel first at a distance of 7 yards on a homemade snake target and was slightly disappointed with the results. At 6 yards I changed to a standard target and the pattern was much tighter and more defined. 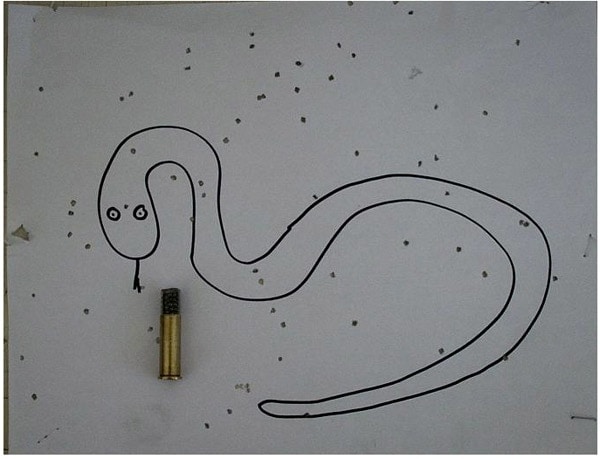 I then tried the CCI shotshells at a distance of 5 yards and only ten pellets hit the “snake”. I am not sure why the factory loads didn’t pattern quite as well, but it seemed that they didn’t hold as tight a group. I moved in to 3 yards, which I’m sure if I had a rattler coiled in front of me that close would probably be a little hair raising. The difference in the target was astounding with one large group hitting the head as well as the shot capsule clipping the edge as well.

At 3 yards there would be little doubt of a dead snake. For the penetration test I found a tough old piece of a garden hose but it was much harder than any snake I have ever seen but I gave it a go anyway. A couple of pellets cracked the hose and penetrated and the others made some impressions, but a real snake is much softer and I have little doubt that #9 shot would have penetrated snake skin. 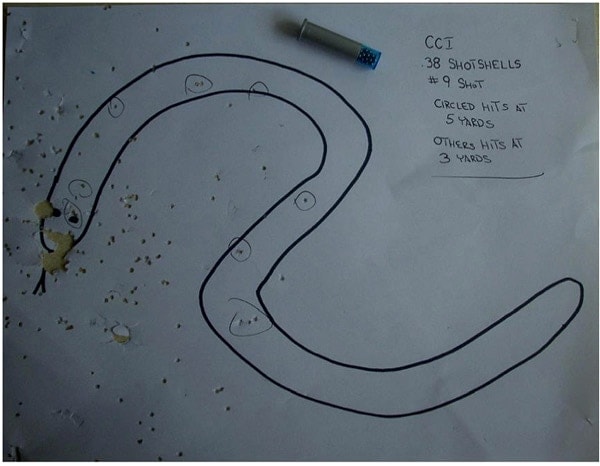 All in all, even in a .38 Special, a dose of #9 shot would certainly be good medicine for a bad snake. I would make sure though that, just like a shotgun, I knew exactly how well the load patterned with whatever gun you plan to carry it in before I went wandering through snake pits. You certainly don’t want to find out the hard way that you load isn’t delivering on some back woods venomous creature.