From Walther with Love: The new PPQ M2 5-inch (VIDEO)

Another striker-fired polymer pistol… Hurray? If this was your first reaction, read on. I had the same exact thought before I shot the Walther at the SHOT Show 2014. Before we get into the features of Walther’s PPQ M2 5-inch 9mm pistol, we must look back at its heritage and development to better understand the design aspects of the M2 variants.

Well, I took the scenic route.

In 1886 Carl Walther formed the firm of the same name and focused his attention on hunting and target rifles. Under the direction of Carl’s eldest son, Fritz, Walther shifted production to pistols. Although Walther enjoyed moderate success, it wasn’t until 1929 with Walther’s introduction of the now famous Police Pistols did Walther become a household name. Two years later Walther would produce the preferred pistol of James Bond, the Walther PPK.

These pistols proved very popular among German non-commissioned officers and enlisted personnel alike. In 1938 Walther entered the military small arms scene in a big way. Its P38 design earned them a contract by the German Reich to replace the infamous P-08 Luger pistol.

Walther’s involvement with the Third Reich meant that during the Second World War, bombs turned factories into rubble and ash. Fortunately, Fritz Walther escaped with a collection of designs and patents. In 1953, having reconstructed its manufacturing facilities in Ulm, Walther resumed production of the P38, then known as the P1. The P38 and P1 are very similar in design and construction to the Beretta 92 series of pistols with their fixed barrels and metal frames. Production of the P1 continued for the German military up until the year 2000, with more than a million built. 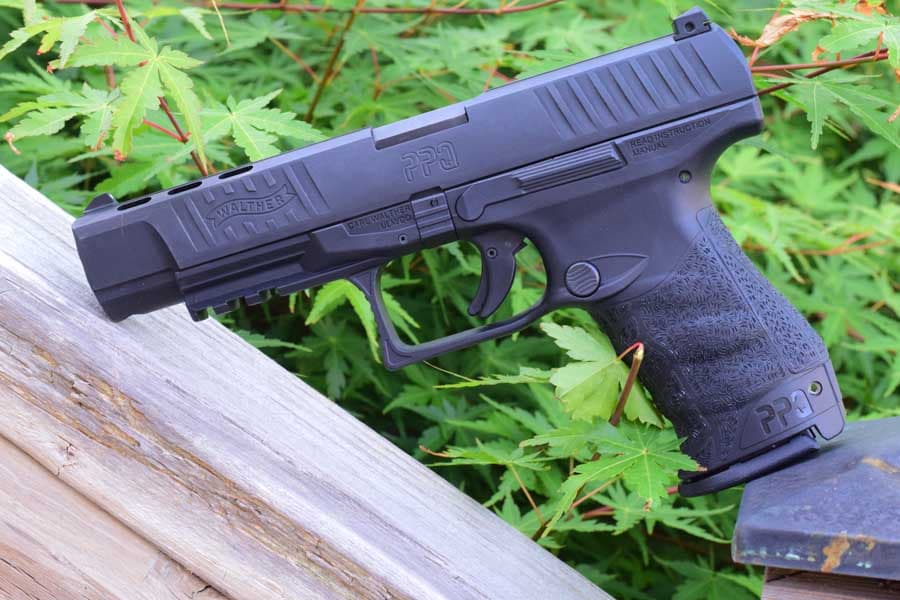 The PPQ M2’s grip may look strange, but is very ergonomic. (Photo by Jim Grant)

Umarex of Arnsberg purchased the Walther firm in 1993 and began exploring polymer-framed pistols after witnessing the commercial success of Glock handguns.

In 1994, Horst Wesp, a Carl Walther GmBH engineer designed Walther’s first striker-fired handgun, the P99. Horst borrowed features from the best tactical handguns of the time: the magazine release of a Heckler & Koch and the polymer frame and diehard reliability of a Glock.

Impressed by its performance and low price, Polish and Finland chose the P99 to arm various police and military units.

That’s a Smith & Wesson, and you’ve had your six.

I’m a huge James Bond fan. In 1997 when Pierce Brosnan switched from Bond’s blow-back PPK to the P99, I had to have one. However, being a Bostonian, I wasn’t legally old enough to buy one. It wasn’t until several years later that I happened upon one in a gun shop and bought it for a pittance. It wasn’t a genuine P99, rather a Smith & Wesson SW99. The interchangeable back straps were a nice touch, as was the de-cocker. Unfortunately, the P99 knock-off had a Mass-compliant 10-pound trigger that was more spongy than the square-shaped children’s cartoon character. Given the difficulty I had finding a SW99 with pre ban magazines in Massachusetts and the lackluster ergonomics, I sold the SW99 and dismissed it as another Glock knock-off.

That occurred roughly seven years ago. I had not given Walther’s polymer products a second glance until I fired the new PPQ M2 at SHOT 2014. I have been missing out, the M2 fixes every issue I’ve ever had, not just with the P99 series, but all polymer handguns. The PPQ series of handguns feature the most positive and comfortable grip on a polymer-framed handgun I have ever experienced. The adjustable back straps make the PPQ small enough for my wife’s tiny hands or big enough for my buddy’s bear claws. Everyone from Odd Job to Jaws can comfortably hold the PPQ.

There’s always something formal about the point of a pistol. 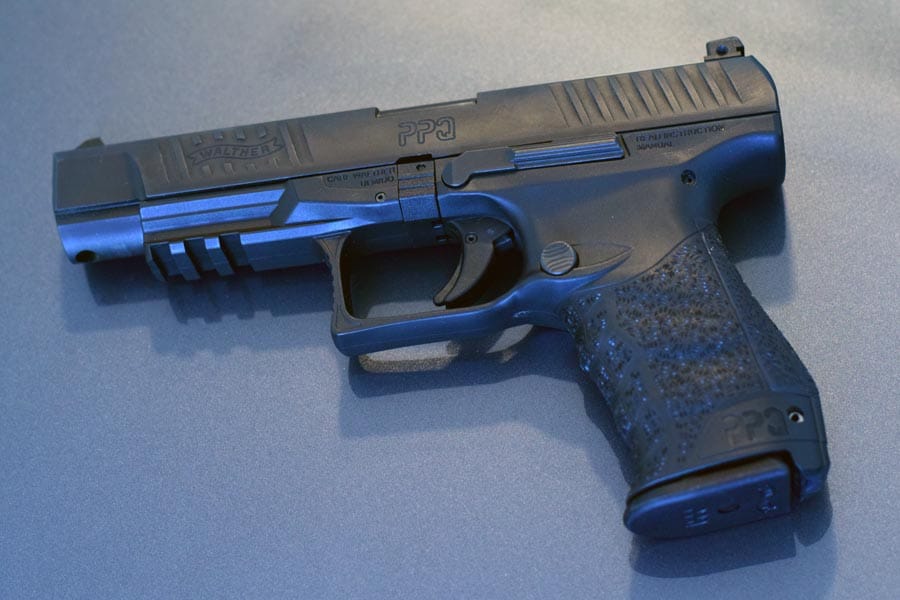 The magazine release and the trigger make the M2 variant special. An ambidextrous push-button magazine release replaces the trigger guard-mounted release, which is more familiar to American shooters, and easier to manipulate with a thumb. More importantly, Walther replaced the trigger with a string from Artemis’ bow. The trigger is mythically great, especially when compared to other striker-fired guns. Lest you think it’s just my opinion, while attending Media Day at SHOT 2014, every shooter that shot the M2 had the same reaction, verbatim, as me: “Holy %&#$ that trigger!”

Walther could sell millions of this gun by simply bringing a sample trigger around to gun-shops and ranges. Upon dry-firing the gun, prior to shooting, I thought that I had mistakenly pre-cocked it somehow. No, the trigger breaks clean, light and with very brief overtravel. The individual who shot after me was so enamored with the pistol that after half a magazine he asked the Walther rep how much the gun cost. You know a gun has made an impression when folks are ready to buy the loaner off the lot. I’ll play devil’s advocate, maybe Walther polished the trigger on the SHOT show gun, in an effort to impress people and get more sales of their PPQ M2.

I can confirm that the loaner pistol wasn’t a fluke, the PPQ M2 I received from the factory still has an incredible trigger. So much so, that I’m replacing my bedside Glock 19 with one. If the M2 had the original P99 or PPQ’s European style magazine latch-release, this wouldn’t be the case. The European style is not worse, per se, but I have a years of experience shooting and reloading with the pushbutton style.

Another nice addition, especially on the 5-inch mode, is the slide release, it’s huge. With most pistols, I have to shift my grip to utilize the slide release, which effects the speed of follow up shots. The length of the PPQ M2’s slide release brings it closer to my hand and provides me with more mechanical advantage when overcoming the recoil spring tension on the slide. 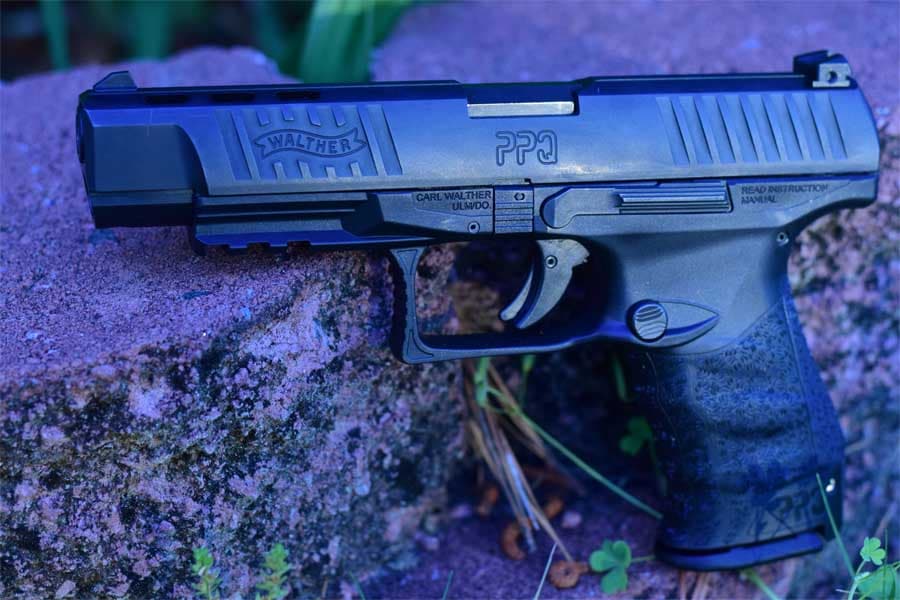 Are you drooling yet? (Photo by Jim Grant)

The Walther is the king of ergonomics in the land of polymer pistols. Anyone who claims otherwise simply hasn’t shot one. The new 5-inch model gives shooters a more generous sight radius and an extra inch of barrel to squeeze a little more performance from the 9mm Parabellum cartridge. The only thing Walther could have done better with the PPQ, is increase the magazine capacity to 17 rounds while staying flush with the grip. These two extra rounds won’t matter to most people, myself included. I’ll take 15 rounds that I can rapidly shoot more accurately over 17 that I cannot.

If you need a bed-side gun that fits both you and your wife’s hands… If you need a competition-ready pistol and don’t have gorilla hands… If you love Walther handguns and wish they made a combat-sized model… Look no further than the Walther PPQ M2 5-inch.