My initial reaction to the Gaucher GN1 Silhouette was, “What the hell is it?” because it looked like someone’s idea of what a futuristic gun would look like from, say, 1953. Someone who was drunk and didn’t have a very good imagination, that is. The Gaucher Silhouette is the French’s excuse for a target pistol (however, it was supposedly used in high level shooting events about a decade ago).

My buddy thought it would be good, since it has a 10-inch barrel, to bring it along for Ballistics By The Inch .22 tests (for results of that test, click here), which we did over a weekend last summer. The results were, well — would it be cliché to say that the Silhouette was what I expected from a French firearms manufacturer? 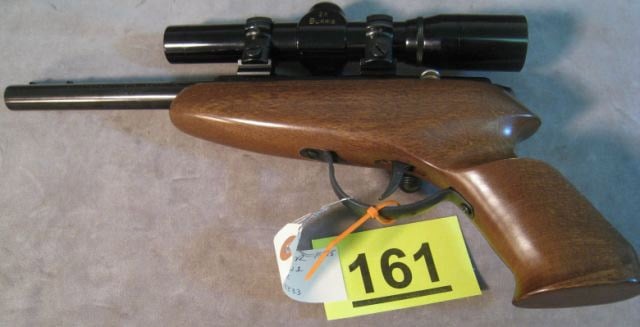 On paper the Silhouette sounds impressive, but when I first handled the gun, well, I was left with the impression that it was made with leftover parts found in a basement or something.

The test model we used had a long silver barrel and a receiver that extended back over your hand for balance, I suppose. It also had one of those carved wooden grips that are popular in some target and silhouette shooting circles, but it lacked the relative elegance of the Keystone Shooting Arms Chipmunk Hunter, and it wasn’t equipped with the functional adjustable mechanism of modern Olympic-level guns like the Walther SSP either.

The frame looked like it had been carved out of wood with a dull knife and then sanded down absently. The fore-grip portion was too wide and a bit ungainly. While there was a texturing to parts of the grip, which were painted black, it seemed almost like an effort to hide flaws in the wood or something.

Fit and finish seemed to almost be an after-thought. The sight picture was okay, but nothing I would consider that great for something supposedly designed to be a target pistol — one with a hooded non-adjustable front sight and an adjustable rear one at that. Lastly, the bolt-action wasn’t particularly smooth or anything, either.

When we started shooting the Gaucher GN1, things were okay at first. The .22 shorts loaded into the gun shot fine, and the trigger wasn’t too bad. Accuracy was good, but we were initially just shooting over chronos set 15-feet out, so that wasn’t much of a challenge. The numbers we were getting on bullet velocity for the first five types of ammo were comparable to what we got with a Ruger Mark II with a 10-inch barrel.

But then it just locked up. Yup. We fired a round and something happened to the action. It wouldn’t open. Tapping the bolt handle vigorously with a block wouldn’t disengage it. We set it aside, and it was done for the weekend. In the end, it needed to go in to a gunsmith for work.

Although this gun may have been a fluke — a Frenchman’s idea of a good joke to pull on some stupid American — I would still advise that you steer clear of the Gaucher GN1 Silhouette. Even if you do find one, don’t let the phrase “rare French pistol” entice you. But if you do decide to buy it, it’ll set you back about $170.