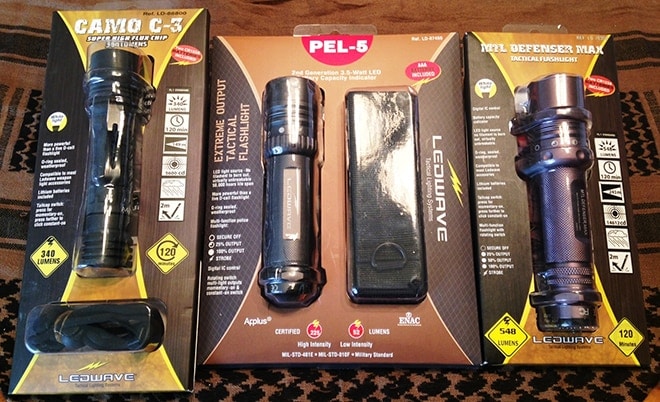 Ledwave, based in Spain, is emerging onto the American market with Snake River Shooting Products, manufacturer of Team Never Quit ammunition, as a member of the family of brands being structured for US sale to distributors, buy Groups, chains, and dealers.  The company offers a complete line of lights and accessories for tactical and outdoor applications.

In this test, we ran three different models of lights in handheld and carbine-mounted configurations.  All employ LED bulbs, as the brand name indicates. Testing was done under varied conditions—indoors, and for searching and target-shooting purposes outdoors.  The lights are listed below, with more general comments to follow. 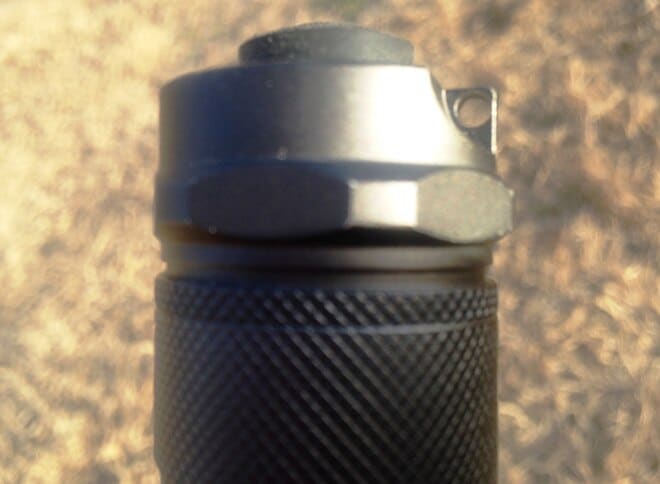 This light is powered by four AAA batteries (included), and is surprisingly bright.  It comes with a belt pouch and has a lanyard receptacle at the tailswitch.  The Ledwave trademark trait of a bright center beam with a broad and consistent ring of less-bright light around it is most apparent with this light. It easily lights up the scenery at a distance of 125-150 yards, as tested on my property.  Ledwave claims this 252-lumen light has a reach of 203 meters. That may be, however whether the beam is intense enough at that distance for definitive target recognition is something that would require more in-depth investigation.

The Ledwave-brand filters don’t fit this model.  That’s the only downside to this torch, if filter use is preferred.

Like light number two on this list, the PEL-5 features both a tail switch and a dial just behind the lens housing.  The lens has off/low/high/strobe positions. The tail switch can be operated as a typical pressure switch, and the beam responds according to the position of the dial.  If the tail switch is in the clicked-on position, a small green indicator light shines to indicate that status, and the dial then becomes the primary control.  This feature is handy, assuming the user is willing to spend a little time practicing with the features in order that they can be run smoothly in a tactical setting.  The indicator light is appropriately subtle, which means it’s also easy to leave the power on unintentionally, draining the batteries.

More specs: the maximum body diameter of this light is 44 millimeters; length is 138 centimeters.  The low setting output is 52 lumens.  MSRP with holster $108.37. 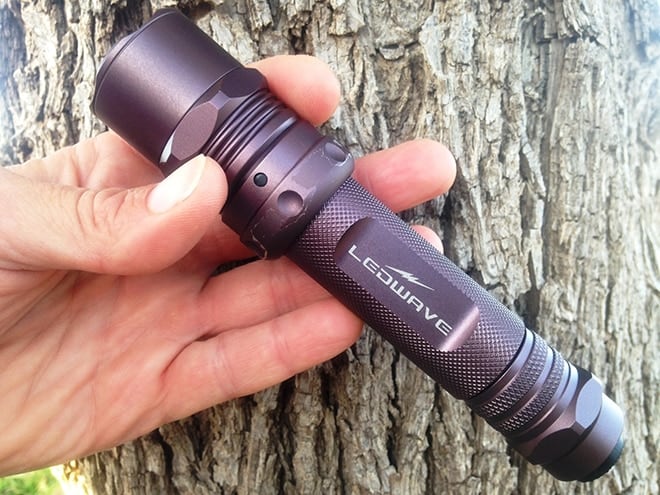 There’s no question; these first two are bright lights.  My first outdoor use of one wasn’t a planned trial, but it worked out nicely.  My two dogs broke away from me one recent night, and I reached for the MTL Defenser-1 Max, including a green filter, as I stepped off my lawn and into the neighboring orchard and fields in search of them.

The green filter was of great value where fencing, or any obstacle, created a backwash of light.  Brushy tree lines and an orchard that offered glare with unfiltered light was much more visible with the filter, saving my night vision and reducing sharp contrast between dark and reflective places. The filtered beam remained surprisingly far-reaching but was plenty bright to light up animal eyes with attention-getting intensity—rabbits, rudely interrupted from nighttime snacks, offered many examples. 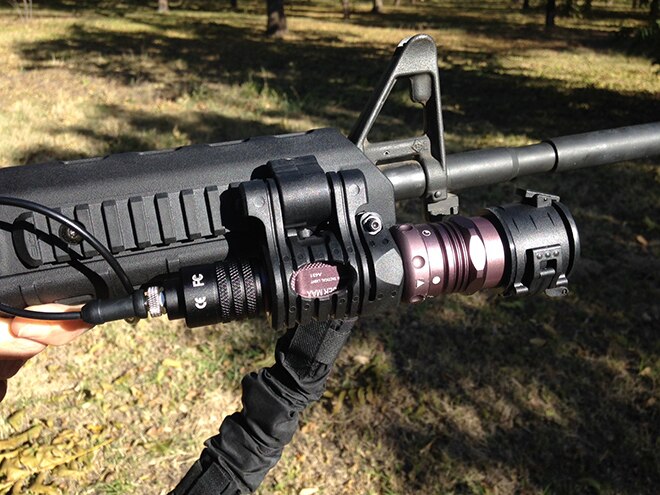 Moving from an orchard to an open field, this light really shone (pun intended). On the medium setting (it has low-medium-high-strobe), the intense beam lit up a swath nearly 200 yards long.  On high setting, it actually lit up trees in the field behind that.  Spotlighting is generally illegal in my home state except for certain landowner business, and my amazement at my new ability to light up the neighbor’s field was tempered by the fear that said neighbor would soon have the sheriff on the way.  The beam from this handheld is every bit as, if not brighter than, typical huge game spotting light. 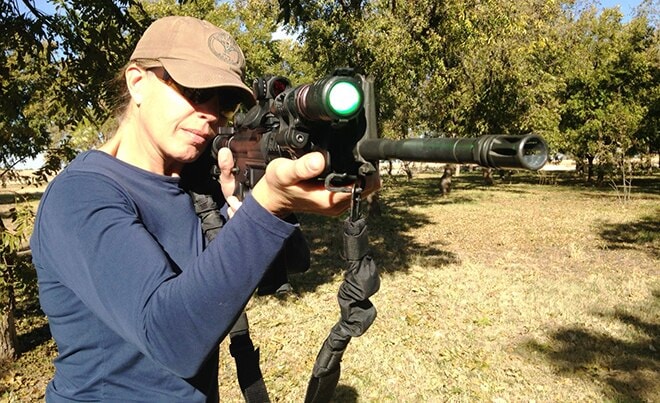 The shell color of this light was appealing to me.  It’s a deep gray, with a hint of lavender—not enough to be feminine but enough to be interesting to eyes used to seeing the four or five tones of the usual tactical palette.

Mounted on my AR with Ledwave’s carabiner-style tactical support, this light added quite a bit of bulk to the forend. Though fine for testing purposes, folks using either of these first two lights for an extended mission may find them fatiguing if the gun is shouldered for long periods, or easy to entangle with other bulky gear worn on the body.

With the tailswitch in the on position, there are five choices of dial settings (off-low-medium-high-strobe) with the Defenser Max and four settings on the PEL-5, which has no medium setting. Efficient operation requires familiarity, learned in daytime, for these nighttime tools.  That’s true of any multi-function light.  A law enforcement technical advisor remarked that Ledwave’s unique system presents a great advantage when conditions allow the user to pre-set the desired light setting (for example, low for indoor navigation or strobe for a hot encounter) upon entry into the situation.  Having to scroll through settings as is necessary with many tactical lights rarely goes well under pressure.

By the way, the happy mutts came galloping up from whatever adventure they’d just had about the time I decided to turn back the house. 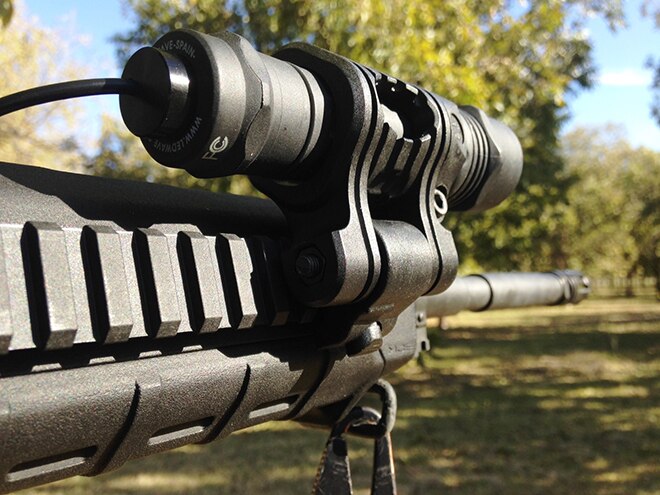 This is the smallest of the three lights, at 133 millimeters long and a maximum diameter of 37 millimeters.  The Camo is powered by two CR-123A batteries (included) for a 120-minute runtime. Its 235 lumens produce a beam the company claims has a reach of 239 meters, which I’ll argue with below.  It has the simplest operation of the three here, with low/high/strobe settings that work with either a click on/off or simply pressure on its tail switch. It also comes with a nice lanyard for folks who prefer one—a lanyard is otherwise an optional accessory.  With a nighttime carbine course on the horizon, I selected the Camo for my AR-15 because I liked its slimmer profile.  It was outfitted with Ledwave’s Camo cable switch, which attaches with rear-adhesive hook and loop material. 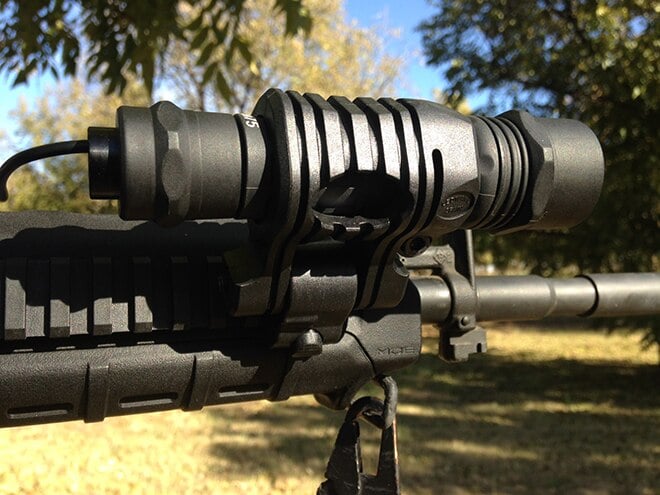 The camo is easy to operate, and the flexible mounting system of Ledwave’s polymer carabiner tactical support, made for rail installation, allowed me to experiment without every change being an onerous task.  In the course of the class, the instructor had me move the cable switch rearward.  The cable is nicely coiled and stayed out of the way, nevertheless for a quick and secure fix I placed an elastic around it to keep it in place. 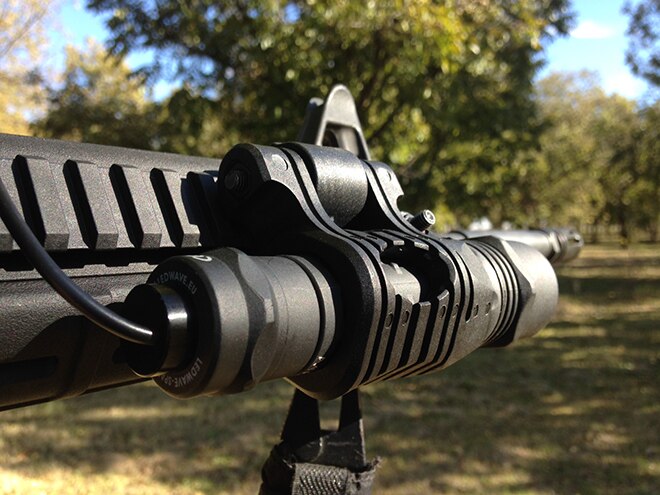 Hook and loop attachments on any cable light never seem to stay in place when exposed to much any outdoor condition, and I’d used a smaller-than-provided piece of my own stick-on Velcro™ to avoid wearing out the original in experimentation.  So the fact that the stick-on part of the switch rotated out of position under use isn’t something I blame on the accessory.

The C-3 Camo is a polymer-bodied light that comes in several colors. I liked its grippy texture and matte finish of this light; though the others aren’t shiny per se, light would glint off them.  For people with smaller hands, whether mounted on a long gun or handheld, it’s the most comfortable of the three. 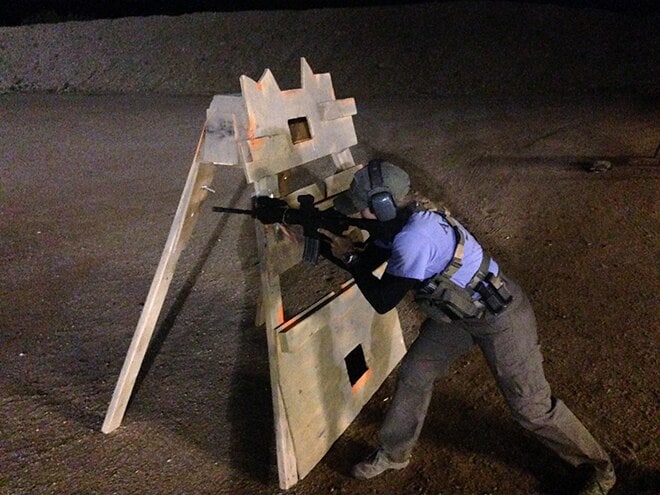 Running the C-3 Camo in a dim-light class. I had difficulty seeing out to 100 yards. (Photo: Team HB)

Had I known before class that 100-yard shots on torso-size targets would be required in darkness, I’d have pre-mounted a different light. The Camo performs well—but not at 100 yards.  I donned corrective lenses, and still couldn’t see the medium- and dark-colored targets at that distance clearly enough to press the trigger.  No light is perfect for every purpose, and the Camo would be a great choice for close quarters conditions where less bulk and reduced reflection are needed.  MSRP is $89.44.

On all three lights 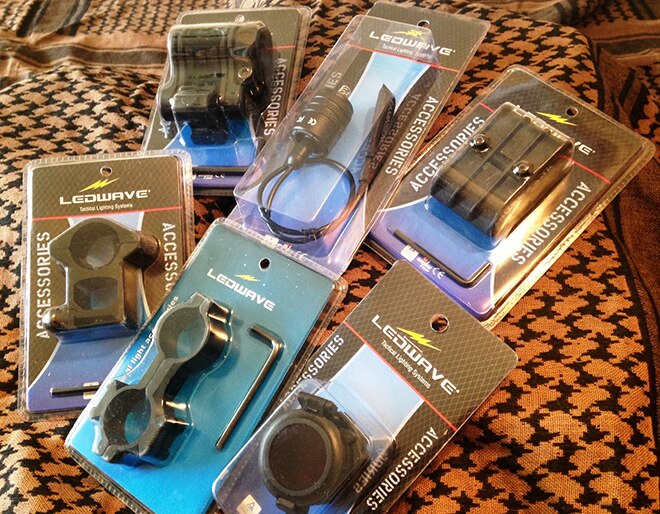 The bezel ends leave a bit to be desired. The shallow,-non-sharp bezels are located only on the switch side. The lens side is blunt and rounded.  That being said, I’m sure I don’t want anyone whacking me in the temple with any flashlight, bezel-ended or not.  It’s a comforting feature found on many less expensive lights. I may be wrong, but my guess is this less aggressive design is a reflection of the anti-knife paranoia present in western Europe.

The Ledwave strobe flashes at a faster rate than I’ve seen in any other brand of tactical light.  It’s quite intense.

The company rep kindly tried to explain why Ledwave embraces candela rating as much or more than the customary lumen rating. After reading the company’s description of these rating systems, I can only guess that these concepts defy simple explanation.  The point is made that Ledwave measures actual lumens on scientific equipment, while other companies reportedly use the SWAG method. The explanation would be better understood if written in clearer terms. And this leads to my primary, if minor, disappointment—

Ledwave is partnering with patriotic Americans to expand into America.  It’s my feeling that some homework is needed in order to appeal to us Yanks. Product names and the grammar employed in the catalog probably represent a great effort by a translator, but need some adjustments to ring true to American ears, not to mention clarifying the technical information including using Imperial, not metric, measurements. Ledwave looks to be a future one-stop shop for all things light and light accessory-related, once these minor changes are made.

Want to get your hands on Ledwave products or get them onto your store shelves now?   Snake River Shooting Products is actively setting up distributors and dealers across the United States and online. Check snakerivershootingproducts.com for a current list.  Distributors, buy groups, chains, and dealers can contact Snake River Shooting Products at info@snakerivershootingproducts.com for information on how to get setup with the line.  Also, please note that for first responders, and during term of Warranty, Ledwave and SRSP offer a complete swap out program through approved Dealers with any issue on any Ledwave product.  Dealers are offered a credit memo program on any approved Ledwave product and are able to immediately swap out a product for a customer for any reason.