3HGR.  Tree-hugger.  It is a descriptive title, as that’s exactly what this device does.  At its most basic, the 3HGR is a simple two point sling, but when the second strap is attached it can securely wrap around trees to be come a very stable shooting rest, or it can strap under your arm for an additional means of security while you’re walking. 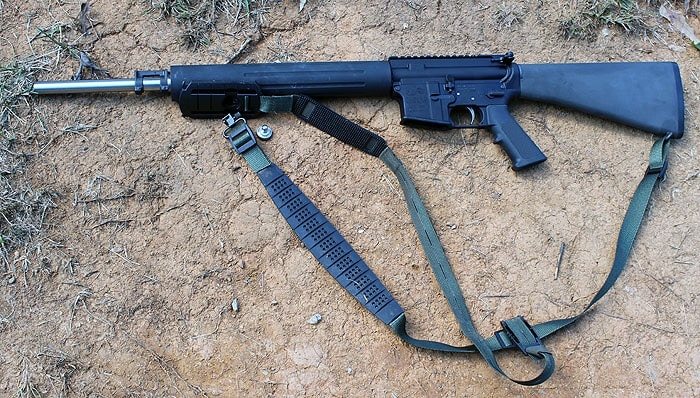 So let’s break it down.  The 3HGR’s real selling point is the way it hugs trees.  And that’s accomplished with this section of the strap.  The polymer plate attaches to the bottom of a rifle’s stock.  The strap itself is built of nylon, but there’s a section of elastic built in to give it a bit of stretch.  That elasticity is needed to pull the buttonhole over the slight post on the polymer platform.

The 3HGR comes with a steel cap (the three piece steel section in the photo above) that connects to the strap mount on a gun stock.  This secures the polymer plate in place under the stock and will even allow for a bipod to be mounted over it.  And it installs very quickly.  The steel cap fits over the strap button.  A pin threads through both and is held in place with a knurled nut.  The strap (or bipod) can then attach just like it normally would. 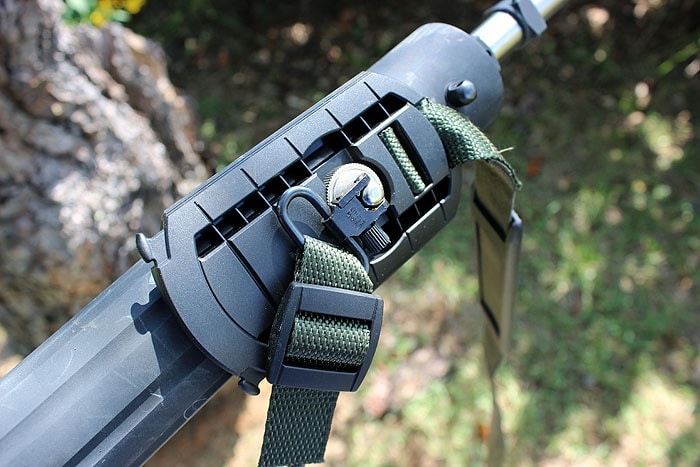 The button holes are incredibly well designed, and are woven into the nylon (instead of being burned in, or cut).  The polymer plate has two protrusions that catch in the button holes.  My only complaint is that there isn’t enough of this strap to wrap around larger trees.

For this photo shoot, I had to try several trees before I found one narrow enough to wrap around.  The trees I had initially chosen had trunk diameters around 12 inches and the 3HGR strap would almost reach around.  It was different when I was in the woods, as smaller trees were abundant. 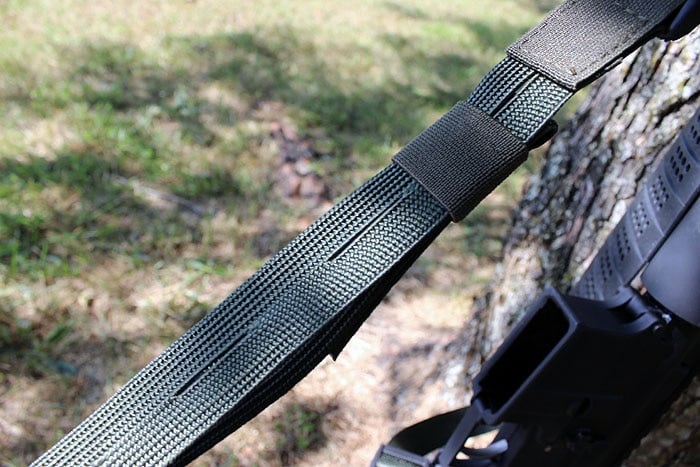 Shooting with the 3HGR was as easy as advertised.  Attaching the strap is awkward at first, but becomes easier with practice.  By the end of the photo shoot, I was able to wrap and secure the strap one handed.

The connection feels secure.  It isn’t so stiff that it will hold a rifle pointed in the right direction.  Yet the elasticity of the strap, and the slight swivel of the polymer plate beneath the gun, allows of a wide range of movement.  It is a ideal way to secure the barrel end for standing shots.

It would also be a good choice for seated shooting.  Instead of resting the rifle on your knee, wrap it low to the ground.  For my tastes, the 3HGR works better than a bipod, as I can pick up the rifle a bit.  This isn’t a big deal with most flush bottomed bolt actions, but can be tricky with an AR.

The Colt HBAR I have the 3HGR attached to needs a dinky 10-round magazine to work with some smaller bipods, but I can easily go prone with this and still get clearance for a magazine (and still have the cover of the tree’s trunk). 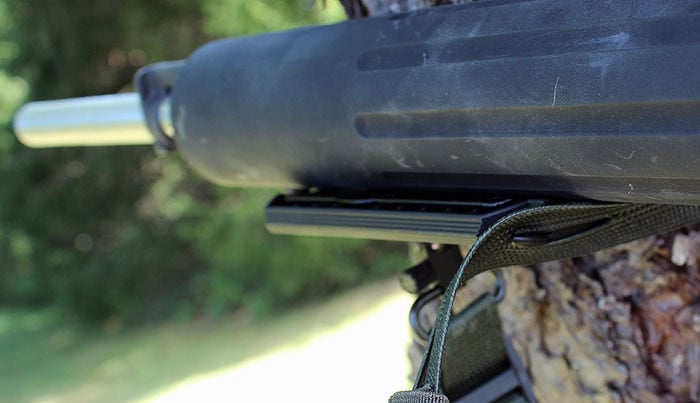 The connection is strong enough to hold up a rather heavy rifle.  I don’t have tremendous confidence when letting go, but the 3HGR never failed.  I don’t think I’d trust it to hold a rifle in a tree stand, but that’s not what it’s designed for.  This isn’t a hands-free device, exactly. 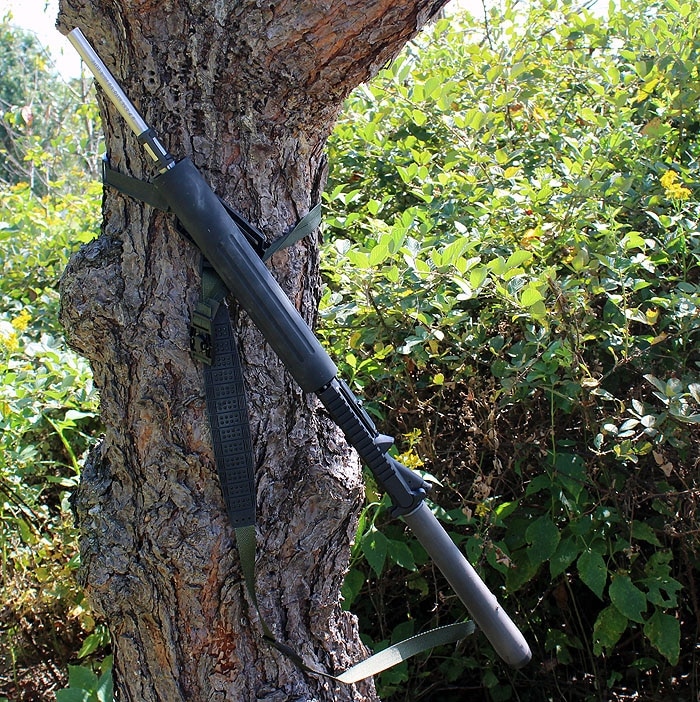 The 3HGR’s strap is a solid strap.  If this part seems less dramatic, it is becasue it is simply a well designed strap.  The shoulder pad is built of a pliable rubber that will resist chemicals and shouldn’t take on too much body odor.  The nylon is solid.  The buckles are well built. 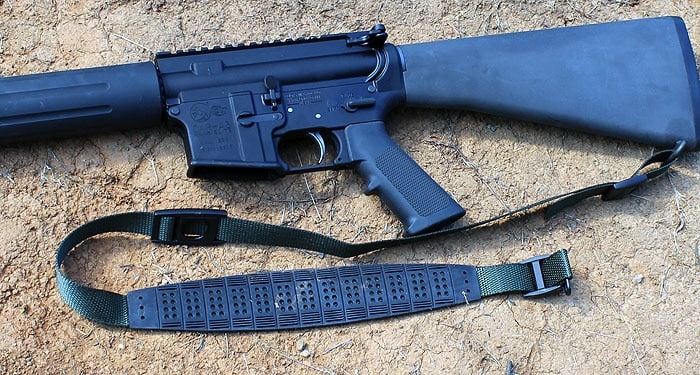 If there’s any one single aspect of the 3HGR that doesn’t inspire confidence, it is the thin polymer connections built into the chest strap.  This is some high-tech polymer casting, and it feels thin.  This is by design, though.  With the rifle on your back, the tree hugging strap connects across your chest.  That’s the way this buckle is used.  And it needs to connect quickly (to add stability when you need to move fast), and it needs to disconnect quickly (when you’re pressed for time when making a shot).

The buckle is solid enough to hold and didn’t even hint at failing through any of our testing.  So it is probably my inherent mistrust of plastic.  Still.  It is the only aspect that I had questions about.  Every other detail is perfect. 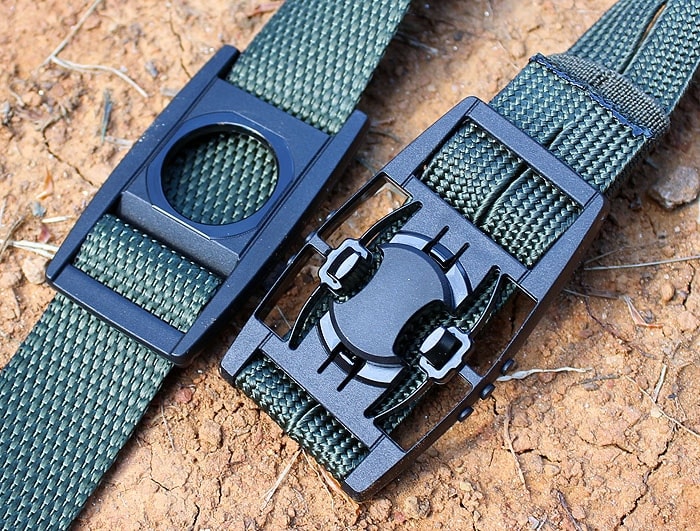 I think the 3HGR is one of those rare, genuinely original ideas.  And it is incredibly useful.  The company that makes them, Treaper Oy, is in Finland, so you’re not going to find one at your local big-box.  At least not yet.  You’ll have to order from their website.  The cost?  79 Euros.  That’s somewhere in the ballpark of $100, depending on exchange rates.  But shipping to the U.S. is included in the cost.  And if you pick one up, let us know what you think about it.  I can’t wait to get mine out when whitetail season opens.