I assume that the 5.11 Tactical V-Neck Holster Shirt looks good on some of the dudes who wear it.  I do not look so hot in the shirt.  But I’m posting a couple of images anyhow.  Rest assured that I’ve been judicious in my use of images.  And this will be the end of the self-deprecation.  For now. 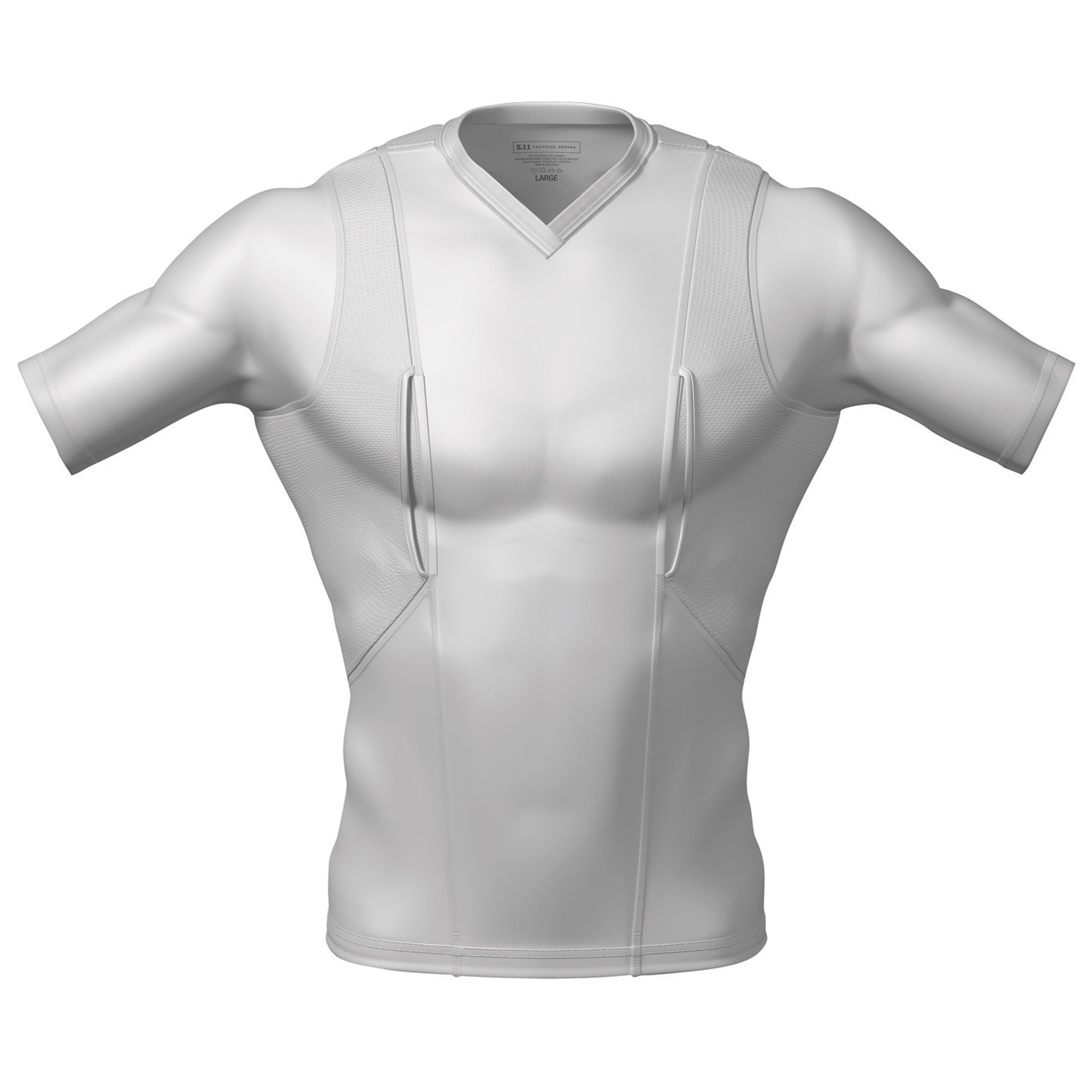 In my imagination, this is what I look like.

On to the review

The 5.11 Holster Shirt is not meant to be seen, not even if you’re all ripped liked this mannequin they use to sell the shirts.  It is an undershirt.  And it is tight.    It is 80% polyester and 20% Spandex, but it feels like the other way around.  The shirt goes on like a second, really tight skin.  That is part of what makes it a such a good holster.

The shirt part is easy enough to understand.  The innovation comes in the way the holster is built into the shirt.  The side panels are the same size and depth on both sides, making it ambidextrous.  And the pockets can be used to hold a gun, extra magazines, and/or a phone or wallet.

The shirt is designed to fit almost like a corset.  I’ve never worn a corset, but I think this is what it would feel like, only without so much whale bone.  The secure fit that keeps things in place has the added benefit of preventing chaffing.  This is a great shirt to wear when working out.

A gun like the Beretta Pico, or a Kel-Tec P3AT, or a Ruger LCP fits flush up against my ribs and won’t hardly move at all.  A heavier gun, like the Colt Mustang, will move a bit, but not significantly.

Carrying with the holster shirt

5.11 has really nailed this design.  Carrying couldn’t be easier.  Lighter guns work better, but even lager guns will stay secure (assuming you can cover them with another shirt).  The pockets are deep enough that there are options for carrying in varying positions (higher under your arm, or deeper and lower toward the bottom of your ribs, barrel down or pointed straight back, etc.).

The yoke of the holster is made of an opaque mesh that does a little bit to break up the outline of a gun.  It doesn’t keep it from printing, but softens the edges a bit.  This image below is of the Mustang.  You can see enough of the gun’s rough edges.  But the width is what really counts.  It is a shoulder holster without the extra girth. 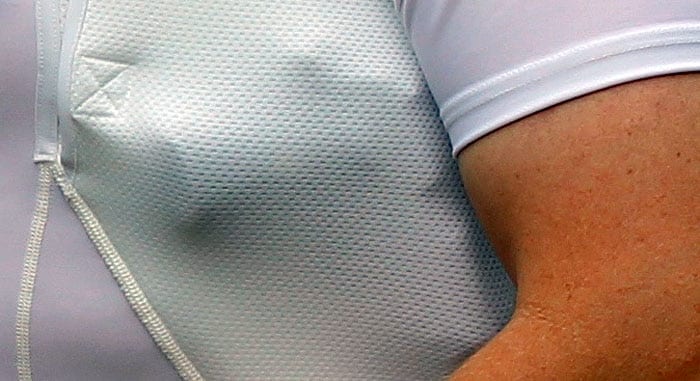 Drawing from the holster shirt

Carrying is one thing.  Getting to the gun is another.  It takes two hands.  It could be done with one hand, but it is a very natural motion to pull open the pocket with one hand, while drawing with the other.  The pocket closes with Velcro, which is just enough of a deterrent to make a fast one handed draw complex. 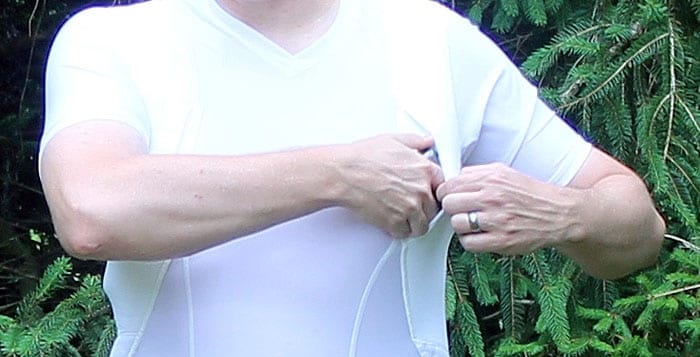 Staging for a good draw is extremely important.  I almost always wear a button up shirt of some sort.  5.11’s Covert shirt has break away snaps that allow for it to be ripped open fast.  But an open button on a shirt is enough to get a hand in to reach the pocket.  From a t-shirt, you have to work up.  It isn’t any more difficult, really, providing that the shirt is not tucked in. 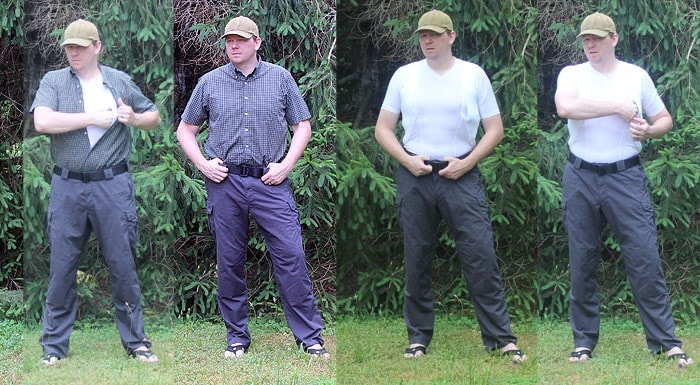 As with all concealed carry, take a good long look, from various angles, and see how a concealed gun prints.  I put a Walther PPQ in the shirt yesterday, beneath a light colored solid shirt, and it stuck out big-time.  The problem was easy enough to fix with a darker plaid that broke up the lines of the PPQ.  For those fashionistas out there, this lovely ensemble is all 5.11 (except the hat and the flip-flops).

5.11’s MSRP for the Holster Shirt is $74.99.  That price seems high for an undershirt, but not for a great shoulder holster.  And the shirt will last.  I’ve had this one now for about six weeks, and I’ve washed it every time I’ve done the whites, just to see how it holds up.  I’ve worked out in it, worn it on several runs, and it is just as solid now as it was the day it arrived.

I think this might be one of the best options for summer carry I’ve ever used.  A casual shirt thrown over the holster shirt makes concealed carry secure and inconspicuous, which means you are free to wear baggy shorts, or running shorts, without worrying about belting in a holster.