When Mossberg sent me a 12 gauge 500 to test out, I thought I’d dress it up a bit.  Aimpoint sent a Micro T1 for the review.  I wasn’t prepared to fall in love with tiny little optic, but I’ve never had so much confidence in my shooting as I do with it on—and that’s why these things exist.  The Micro T1 is unimposing—yet it can make any shooter fast and accurate.

What is this tiny thing?

As its name suggests, the Micro T1 is surprisingly small.  At just over three ounces (including the base) it is easy to forget that it’s mounted on most guns.

To say the Micro T1 is a simple red-dot sight would be reductive.  What the T1 does is simple, but the sight is anything but.  Inside is an LED and specially coated lenses.  Yet the anodized aluminum case is not much bigger than a 12 gauge shotgun shell. 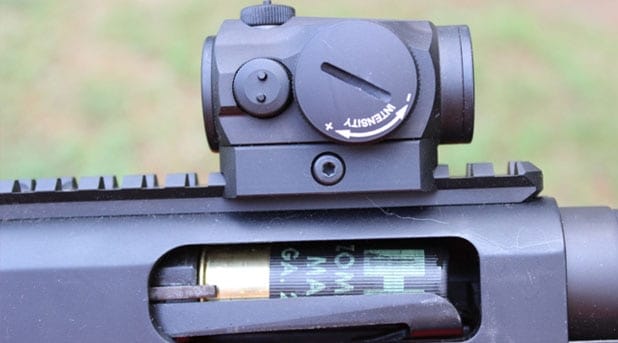 It is battery operated. Aimpoint says the battery will last something like five years.  I just got this in last month, so I wouldn’t know.  But I trust them.  Five years.

What does it do?

Easy.  Look through the sight and you’ll see a red dot over the target.  The benefits of this should be obvious.  Target acquisition is made much easier by the glowing red dot.  That’s it, really.  But that’s enough.

The Micro T1 doesn’t have any of the more cumbersome attributes of some scopes.  There is no limitation to the field of vision and no required eye relief distances.  The Micro T1 can be used on handguns, shotguns, or rifles.

What doesn’t it do?

It doesn’t magnify.  That’s built into its design.  This allows the Micro T1 to be used in close quarters.  If you are shooting at greater distances, the T1 can be coupled with other optic devices (as long as you have room on the rail to mount everything).

It doesn’t provide any thermal or night vision attributes, though it can be used in conjunction with both.

How well does it work?

Really, something this small can’t possibly stand up to the abuse most guns in active service experience, right?  Don’t let the size fool you.  It can take whatever you dish out.  The base is even built to absorb recoil without losing its grip on the rail.

And the Micro T1 shows a tiny red dot right where the gun is pointing.  Aiming becomes stupid easy. 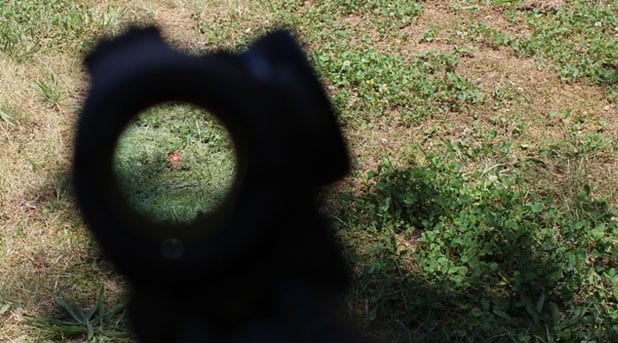 At 100 yards, the red dot covers an inch of the target.  Not too bad.  It is exceptionally difficult to measure the Minute of Angle claims with a Mossberg 500.  Does it really shoot 4MOA at 100 yards?   I can’t tell.  I could shoot slugs out of the 18.5” smoothbore barrel, but that still wouldn’t prove anything.  For buckshot or birdshot, the T1 is dead on.

This Mossberg 500 has a rail above the receiver, so mounting it was easy enough.  In bright daylight, the T1’s highest settings are easily visible (the highest designed for use in desert conditions).

But this isn’t a typical Mossberg 500.  It is a Tactical Light Forend.  With its rudimentary bead sight, targeting is mostly reflexive—which is why I was interested in the Micro T1 to begin with.  But the true potential came through in the dark. 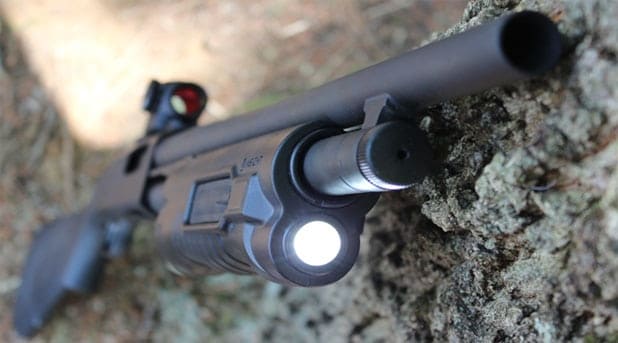 The Mossberg’s light illuminates the target.  But the center of the cone of light is slightly lower than point of aim.   At greater distances, the diffuse spread from the forend mounted light is much wider than the impact point.  The Aimpoint’s lowest settings, in conjunction with the Mossberg’s light, make shooting at night as easy as shooting during the day.  Just don’t turn off the light.  If you do, all you will see is a little red dot. 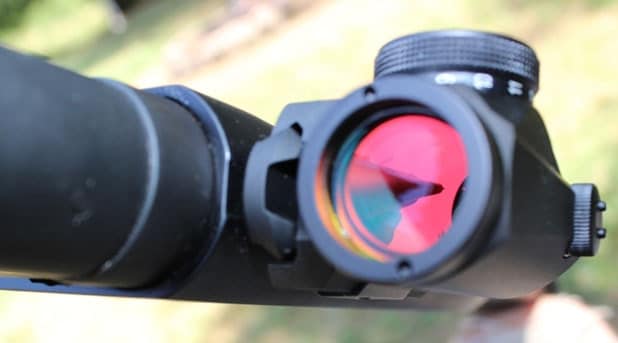 These ease with which it is used might mean the difference in a firefight.  And that’s where Aimpoint shines.  While these sights have legitimate sporting applications, they are built for a life of service, and to insure the lives of those who serve.   Hard to put a price on that.