Some guns just feel right with their good, old-fashioned iron sights.  Winchester lever actions, for example, look strange with scopes.  Others, like the sea of short barreled ARs beg for a high-tech optics sitting up top.  If you’re just looking for something cosmetic, tacticool, almost anything will do.

But if you want a sight that will maximize the potential of your AR, check out Aimpoint’s Patrol Rifle Optic.

Aimpoint’s known for making exceptional red-dot sights.  Their Micro T1 is a technological marvel, and ridiculously compact.  The Patrol Rifle Optic (PRO) is even more rugged, more precise, and just a bit bigger.

The PRO is a specialized red dot sight designed with the AR-15, M4 type of rifle in mind.  The Pro has a spacer that elevates the sight to the level of most AR front iron sights.  At 100 yards, the dot covers half an inch.  Do you need to be more precise than that?

The housing on the PRO is also functionally designed.  The tube is built from aluminum.  The lens covers are hinged, so they’re harder to lose.  The rear cover has a clear window, which means you can aim somewhat reflexively, even if the front cover is down.  The key is to keep both eyes open.  Assuming you have functional stereoscopic vision, one open eye will see the target—the other (looking through the capped sight) will see the red dot projected on the closed cover (and on the target, too).  Some folks are scary smart.

The dot will be there, because the PRO is always on.  It runs for three years on one battery.

The front lens and rear lens are recessed to protect them from you and everything else.  And they’re threaded, which makes attaching accessories or other scopes easier.  Another useful feature is the linked covers for all of the knobs and such.

What does it do?

Simple.  It reduces some of the inconsistencies of target acquisition.  A red dot sight isn’t a scalpel.  But it is fast.  A simple glance through the sight and the point of impact is easily seen.  If you move the sight slightly out of line, the dot will (to a point) stay with the point of impact. 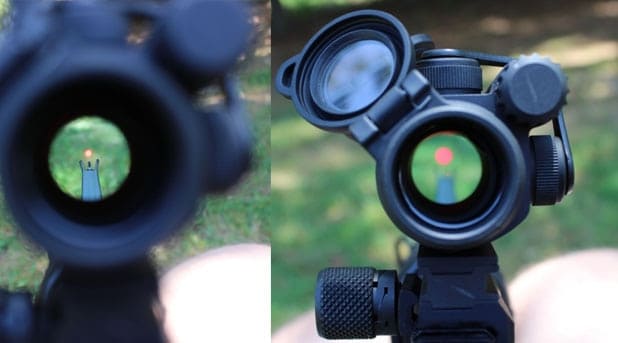 If you’re interested in the Aimpoint PRO, but not for an AR, the spacer can be removed.  That would put the optic more in line with traditional iron sights, like those on a Ruger Gunsite Scout, or a shotgun, or a SMG.

One of my favorite design features of the PRO doesn’t affect how it shoots, but how it mounts.  The PRO has a twist knob that tightens the mounting hardware.  But, it has a spring inside the knob, and some wicked teeth.  When the knob is tight, it will spin, clicking on the geared teeth.  This keeps it from over tightening and deforming either the rail or the hardware.

If that’s not cool enough, the PRO is waterproof to 150’.  You know—if you’re into that sort of thing.  I’m not sure why I would want to take it that far underwater, or underwater at all.  I’m not waterproof at those depths, but you never know.  And it is nice to know I could.

Aimpoint makes some amazing sights.  Some people balk at the price tag on optics.  The PRO sells for more than $400.  Here’s my take on the matter.  Those who would truly need an Aimpoint sight would gladly pay much more for the advantages it provides.