I’m  a traditionalist. I love lever-guns, .45-70 Gov ammunition and iron sights. Optics rarely find their way onto my rifles, until recently. Normally, iron sights were precise enough for my uses, and if I wanted more precision, I would plunk down the extra cash for a quality aperture sight for my .22 LR target rifles. The dizzying selection of available optics along with the vast vernacular of optic-specific nomenclature, caused me to shy away from mounting red dot or holo sight on my rifle.

The few times I chose to employ an optic on a rifle, my time to acquire and fire on a target was slower than when I used open sights. I concentrated too much on aligning the reticle perfectly on target, defeating the purpose of the sight. As I’ve gained more experience both in life and behind the trigger, scopes have slowly managed to sneak their way onto my hunting rifles and good red dot sights are now present on my home defense carbine. 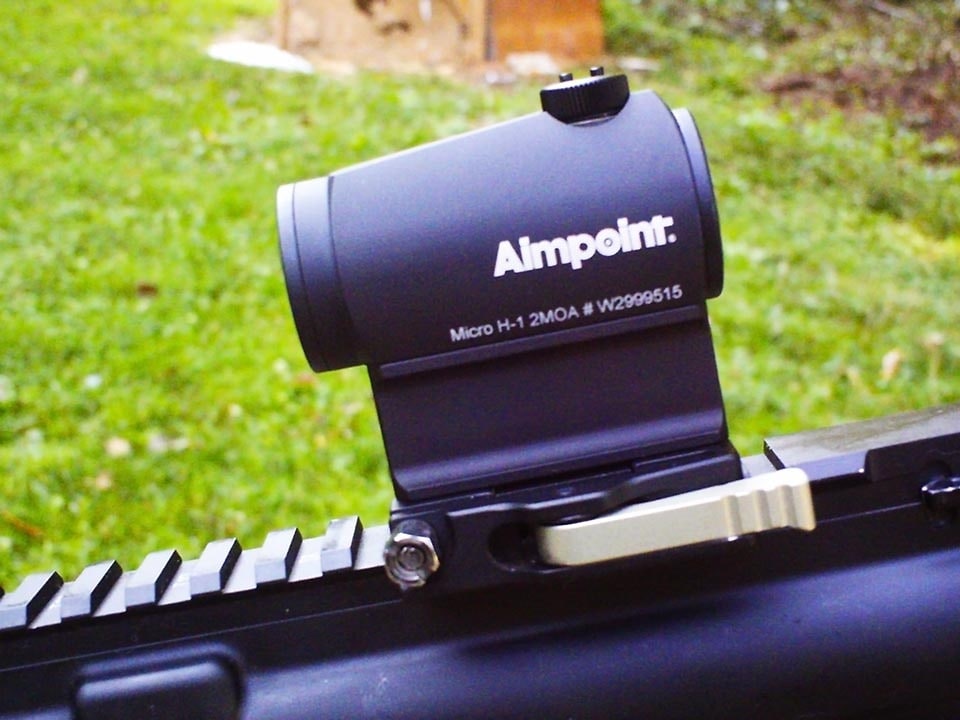 One such optic is the Micro H-1 from Aimpoint, makers of the ubiquitous Aimpoint M2, which saw extensive use as part of the Special Operations Peculiar MODification kit for the United States military in 2000, as the M68 Close Combat Optic. With such an extensive military heritage, I was excited to check out the Aimpoint Micro H-1.

For those not in the know, one of the downsides of most optical aiming devices, is the additional weight they add to a weapon. A few ounces might not seem like much, but when trekking through the forests on a hunting trip, ounces become pounds.  Thankfully, The H-1 weighs a mere 3 ounces, compared to a traditional magnified optic like the Redfield Revenge 3-9x42mm,  which weighs in at 13.6 ounces. The H-1 isn’t just a lightweight range toy, it’s a compact, durable red dot sight that effectively replaces open sights.

In fact, the Micro H-1 red dot is so small, it can even be mounted on a handgun for competitors or pistol hunters, without being too heavy or obtrusive. The H-1 is constructed from aircraft-grade 6061-T6 anodized aluminum, with a matte black finish to cut down on glare. The mount and spacer are anodized in the same finish, designed to attach to both Weaver and Picatinny rails, and provide a solid mount for the H-1. The H-1’s reticle is available in either two minutes of angle or four MOA sized dot configurations. The dot on this example is sized at two MOA, which is more precise than the four, though not quite as quick to acquire. According to Aimpoint, the battery has 50,000 hours, or roughly five and a half years. So while the H-1 cannot be toggled on and off, battery life won’t be an issue. For faster target acquisition, the H-1 features no magnification which affords the shooter unlimited eye-relief for the best situational awareness possible. 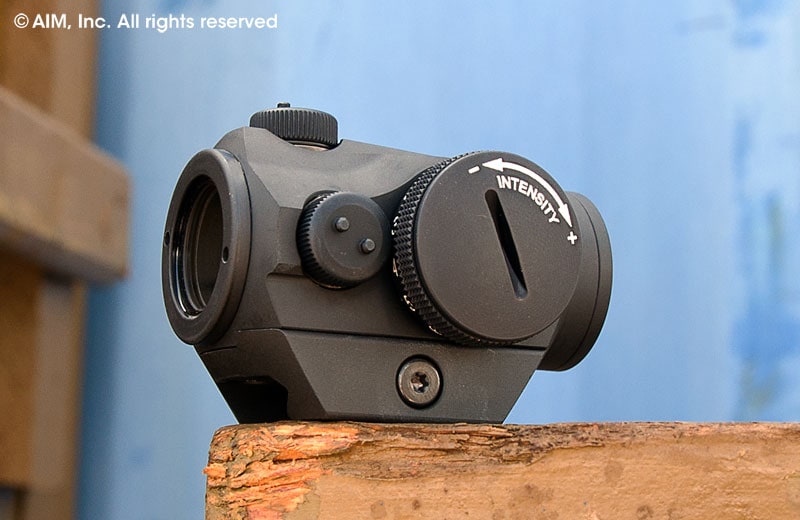 The Micro H-1 may be small, but it’s nigh-indestructible. (Photo: AimSurplus.com)

Initially, I was concerned with the H-1 being too bright for night use, but thankfully it has 12 brightness settings, each clearly marked on the dial, so shooters can adjust it for both day-light and low-light shooting. The dials for windage and elevation use the studs on the adjustment caps to adjust the settings. It’s a neat little touch for people like me who enjoy gadgets on their gadgets. Each adjustment click moves the point of aim half an inch at 100 yards, which makes zeroing the optic slightly time-consuming, but extremely precise. Aimpoint’s website and instruction manual advertise the H-1 as 100 percent waterproof, and impervious to all gun oils, solvents sweat bug spray and liberal tears.

The H-1’s primary market is hunters and Aimpoint’s website features pictures of the H-1 on top of expensive European hunting rifles. There is also the T-1, a more tactical version of the H-1 that features a much more durable matte grey finish with militaristic flat grey Aimpoint logo for those who shooters who prefer their rails with more rails, though both sights function identically and have the same MSRP at $600.

Rather than expensive hunting rifles, the H-1 reviewed is mounted on a more blue-collar Remington 700 ADL or a Colt AR-15A3 carbine. 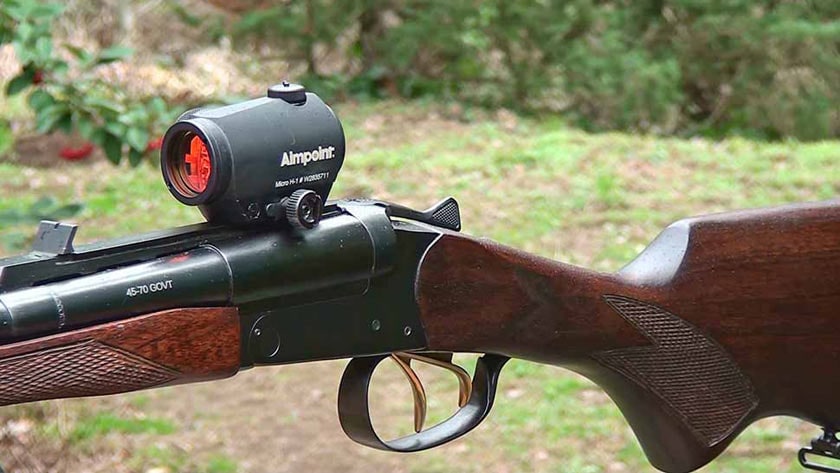 The H-1 can be mounted on rifles of all varieties – from tactical models to more traditional models like this double barrel side by side 45-70 Gov. (Photo: Chassons.com)

Though many hunters harvest game at ranges of 100 to 300 yards, both in the U.S. and around the world, most American hunters are rarely afforded such long stretches of open ground. The dense forests of Pennsylvania, where I normally hunt,  rarely allow me to take a shot greater than 200 yards. While this might be unthinkable for those who hunt at longer ranges, it is reality for many hunters.  The H-1 wasn’t designed for long range shooting, but excels at closer distances. One cool advantage of its diminutive size is that it allows much faster bolt manipulation, than a standard optic because it doesn’t interfere with chambering rounds.

Additionally, follow up shots are much quicker with the H-1 compared to a conventional scopes due to its reticle size and massive field of view.

On the Model 700, target acquisition is lighting fast, and the red dot is very bright on its highest setting, almost to the point of totally obscuring your target. Dialing back the brightness, the H-1 provides a clearer sight picture than the factory iron sights on a Model 700 while being more than twice as quick. Just don’t neglect to purchase a good bridge mount for you bolt action rifle. The one used here is an EGW aluminum mount. 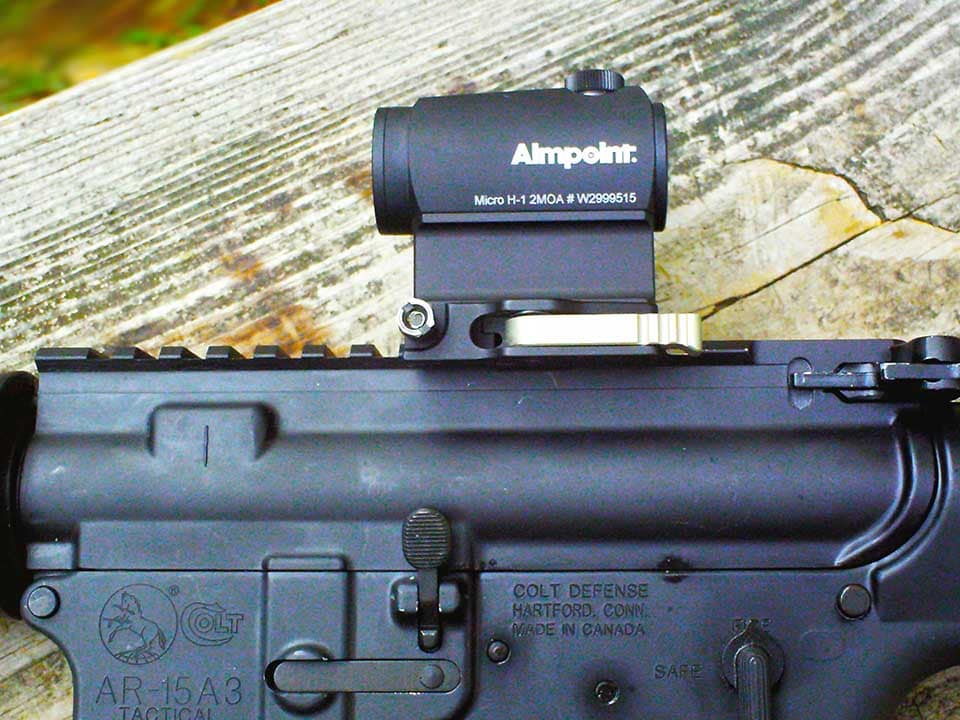 On top of an AR-15, the H-1 looks right at home. Yes it is marketed towards hunters, but the tactical T-1 optic is essentially the same red dot sight with a different matte grey finish.

One important benefit of the H-1’s unlimited FOV is that allows shooters to fire with both eyes open, an important skill during a defensive situation. The H-1 is so much faster to acquire a target than the standard AR-15 iron sights, it’s no wonder the U.S. military chose AimPoints to top their close quarters rifles. In a home defense situation, seconds matter, and the H-1 can help shave seconds off the clock when engaging an intruder. Since AR-15s are also becoming popular for predator hunting, the fast target acquisition of the Micro can really benefit the hunter who uses an AR-15.

With both rifles I was able to achieve 2-inch groups at 25 and 50 yards during rapid fire strings, or about as fast as you can get with a Model 700. I found that I didn’t need to concentrate as long as I normally would with iron sights on the rifle, and it provided a consistently clear, bright sight picture.

Some may prefer the more cost efficient $39 red dot from a local big box retailer over the more hefty $600 AimPoint, but there are reasons to justify dishing out the extra cash: durability, quality control battery life build quality, and an excellent warranty. So, if you’re a buy once, cry once kind of the guy, the $600 price tag won’t sting so bad.