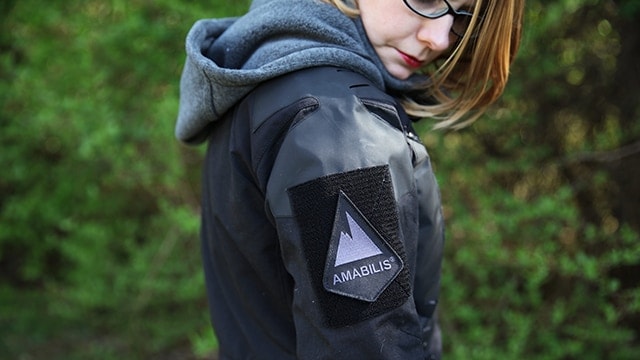 While the gun and gear industry is inundated with tactically styled apparel for the operator in us all, there are those who a more low-key approach to tactical and concealed carry wear. Enter Amabilis.

First appearing on crowd-funding sites with its innovative Dave Duffel Bag, the company quickly moved on to bigger endeavors, launching an apparel line on Kickstarter. Not just satisfied with offering looks for men, Amabilis upped the ante, introducing options for women.

As a self-proclaimed micro warrior, I couldn’t wait to get my hands on Amabilis’ gear to give it a thorough go from a lady’s perspective. 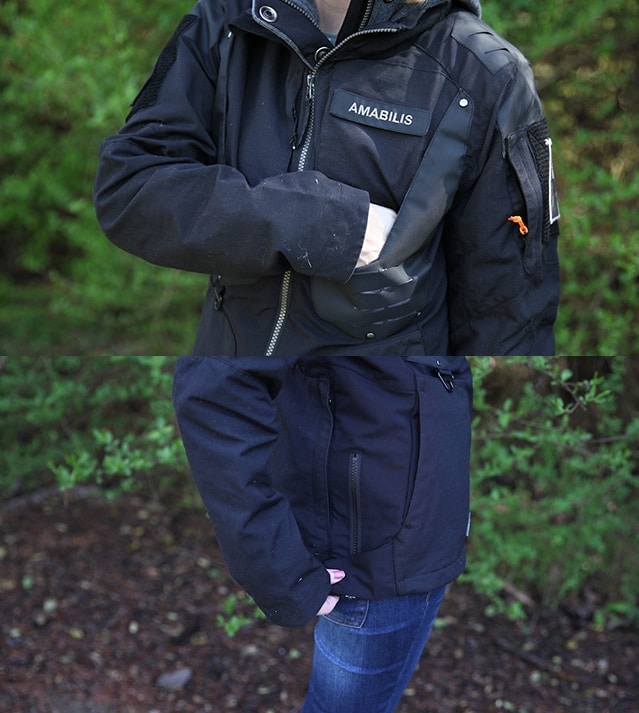 The jacket has 10 pockets in total, including one the chest. Once zipped, a button can be secured to prevent unwanted viewers from seeing what users are packing. (Photo: Jacki Billings/Guns.com)

First up in the Amabilis arsenal is the Responder Tactical Jacket. The jacket sports a water-repellent military-styled look with laser cut Molle patterns and hook-and-loop swatches on the shoulders and chest for nametapes and patches. Offered in Tactical Black and Military Green with sizes ranging from XS to XL, the Responder Tactical Jacket comes in what the company terms the “.5 Fit.” The .5 Fit offers half sizes for users who fall in between sizes and seek a better fit.

When the Tactical Black Responder Jacket, in size small, arrived at my doorstep it wasn’t quite love at first sight. Honestly, I wasn’t entirely sure I dug the military inspired aesthetics. However, I was quickly reminded not to judge a book, or coat for that matter, by its cover. Though it looked questionable stretched across the end of my bed, it looked sleek and stylish on.

Black, of course, looks great with everything and the Responder Tactical Jacket is no exception. The functionality of 10-plus pockets made it easier to store extra mags, lights, lipstick, snacks, spare Legos….you know everything a Tactical Target mom needs. The jacket touts premium YKK zippers and after several months of use, they’re still going strong.

Another added feature of the jacket is its ability to coincide with concealed carry. Along each side of the jacket is a zipper that can be unzipped upward to provide access to a concealed holster and gun in the 3-to-5 o’clock position. Though I prefer to carry in the appendix position, the option to switch my gun to the rear was nice one to have. It’s also worth mentioning that even in AIWB, the jacket is short enough that it did not impede my draw from my AIWB holster.

Now the downside – the price. Let’s be honest, I’m the kind of mom that usually spends $25 maybe $45 on outerwear for myself. The Responder Jacket, though well made, is a little out of this single mom’s price range. Coming in at $279, consumers looking to snatch the jacket need to prepare to throw down some coin. Despite the sticker shock, the jacket has held up since I received it earlier this year, so you’ll get some mileage from it which makes it a little easier to justify the heftier price. 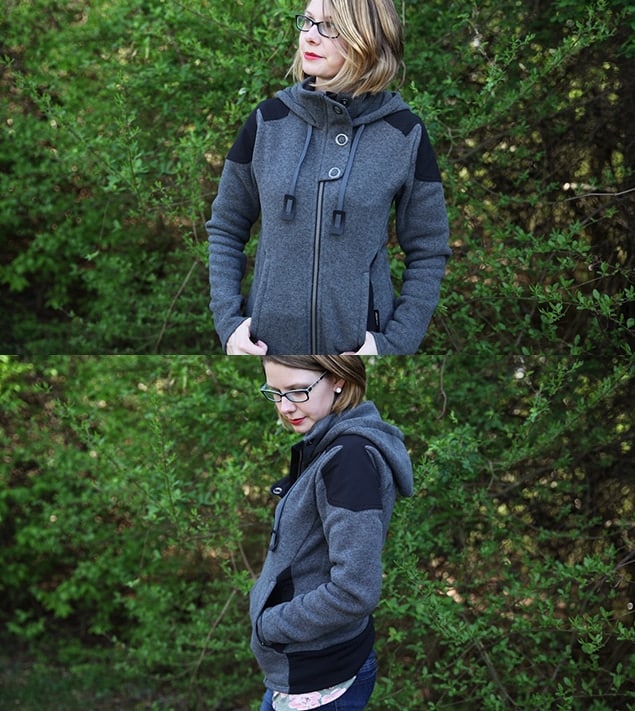 The Responder Hoody features black accents around the shoulders and hem and can be buttoned up all the way to retain even more heat. (Photo: Jacki Billings/Guns.com)

The Responder Hoody is made to either wear solo as a generic hoody or pair with the Responder Tactical Jacket for a warmer solution. Constructed from Polartec Thermal Pro Fabric, a 100-pecent recycled material, the Hoody also utilizes stretch fleece on the hem and cuffs as well as nylon on the shoulder patches. The hoody comes in two color schemes – Moss Green or Asphalt Grey – in sizes XS to XL. Amabilis sent me the Asphalt Grey in size small.

Spoiler alert – I absolutely adore the hoody. From the moment I saw it, it was like John Cusack was standing under my window while Peter Gabriel blared from a boombox. The Responder Hoody fantastically melds fashion with tactical aesthetics. Featuring abrasion shoulder protection and zippered-secured hand pockets, the hoody is roomy enough to pack a knife, phone or spare light and mag; but doesn’t make you look like you’re in operator mode.

For my petite body frame, the Hoody was a winner. It was roomy enough to allow me to tote my Glock 19 comfortably and without any concern of printing; but not so big that I looked swallowed by material. In fact, it balances function and fashion so well I received a bevy of compliments from people around town and on social media, raving about the hoody’s looks.

Though the Hoody is overwhelmingly positive, there are a couple gripes I have. For one, it’s warm but it won’t keep you super toasty on extremely cold days. While I wore it just fine when the temp was in the high 30’s, anything below that and I was shivering after a few. A good breeze, pushes air into the fabric and will gave me a good chill; but that’s easily solvable with the addition of the Responder Jacket. More on that in a minute.

The next issue I had is the same as the Responder Jacket –price. The hoody does offer a slightly lower price tag than its sister jacket, but it’s still on the premium side at $110. Is the price worth it? That’s a resounding yes; but it’s worth planning for if you don’t spring for $100 hoodies often.

The Hoody and Jacket Together 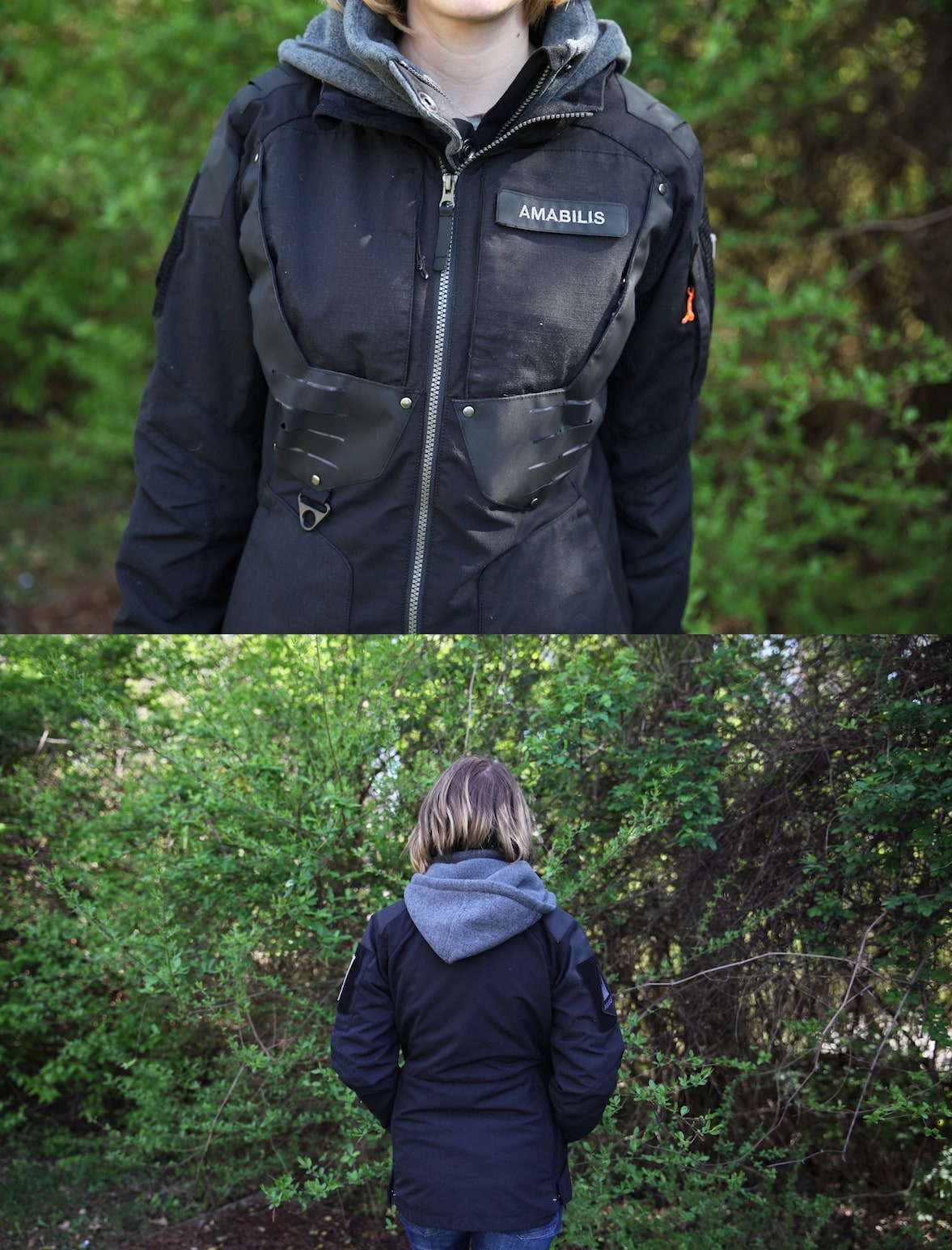 The Responder Jacket doesn’t come with a hood, but it pairs with the Responder Hoody for a layered look. The jacket also features hook and loop on the front to add a nametape. (Photo: Jacki Billings/Guns.com)

While the Responder Jacket and Hoody are able to be worn separate of each other, their strength lies in their partnership. Like Batman and Robin, the hoody and jacket pair to create a cool looking team. The gray of the hoody offsets the black in the jacket, creating an urban look with functionality.

Even better, the combination offers a warmer solution for cooler days and the layered look grants users the ability to peel off the jacket should temperatures rise. If you’re a pocket lover like me, the ability to stow a purse worth’s amount of extra gear in the hoody and jacket pockets filled me with delight.

Amabilis’ pairing of the Responder Tactical Jacket and Hoody spawns an understated tactical look that is both functional and fashion-forward. The black jacket and grey hoody create a “cool kid” vibe that is somewhat modular in the ability to transform from stand-alone outerwear to a layered unit. Though Amabilis’ apparel isn’t exactly on the cheap side, the Responder series is well worth the sticker price for the comfort and function. The women’s Responder Tactical jacket is priced at $279 while the Responder Hoody features a MSRP of $110.