Shooters who didn’t grow up shooting AKs typically find a couple of aspects of the platform a bit troubling.  The bolt doesn’t lock back when the gun is empty.  Scopes and optics are commonly mounted from the side of the gun.  The biggest learning curve, though, has to do with operation of the charging handle and safety, both of which are on the right side of the gun.

Some have come up with effective ways of keeping their right hands on the grip (and close to the trigger) while doing smooth contortionist moves that bring their left hands under the rifle.  It looks cool when done right, but is rather awkward for most of us. 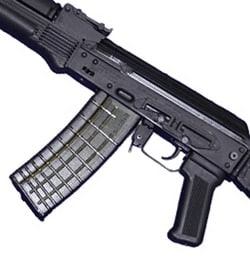 But not to worry.  The AK works just fine exactly the way it was originally designed.  If you want to address any of the gun’s quirks, the AK is a blank slate for you to work with.

After some good do-it-yourself handiwork, the additional safety lever will let you engage the safety with your thumb.  And it doesn’t prevent you from using the normal safety.

Time to get into the workshop

I picked up an Arsenal SLR-106 from RRC Firearms recently.  I’d been looking for a AK in 5.56 for a review I’m working on.  Arsenal has announced that they’re killing the 106 line, which means these 5.56 AKs are going to be harder to find.  So I was a bit hesitant to start hacking on the rifle, but only a bit.

The first thing to know is that the new lever won’t work on every AK.  Depending on the type of stock on the rifle, the lever may hit rivets or stock-folding-buttons.  It is best to look at the projected path of the lever and make sure it is free from obstruction. 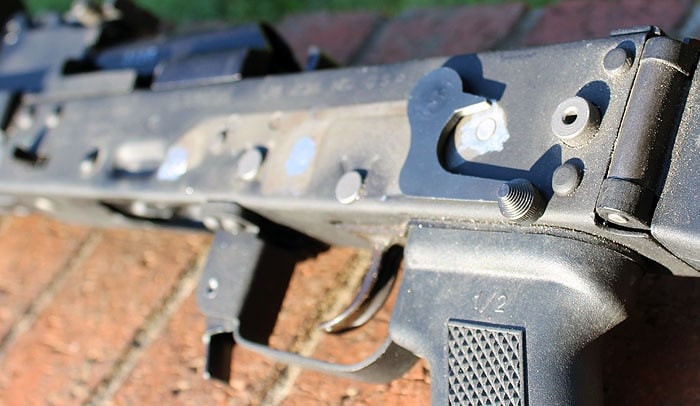 I barely had enough room on the 106.  More on that later.  You will also have to remove the scope mount from the gun.  With all of the new options for mounting optics, this is no great loss, but it will leave your reviver looking a bit like this.  And that will require a bit of touching up.

The last trick is to get the hole enlarged.  The axle of the safety lever nests inside the hub of the new lever (effectivly making it on solid piece).  This is a permanent alteration.  No going back.  Make sure you are really committed to the change before firing up the drill. 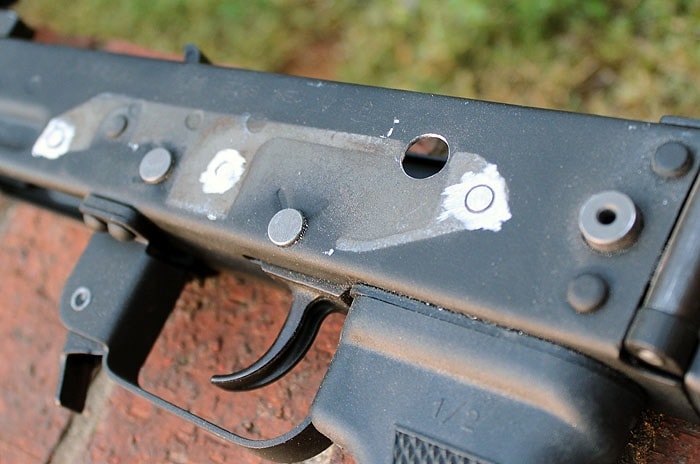 I cut off the scope mount with a Dremel.  I ran through the heads of the rivets, cut the scope mount in half, and pried it off.  I moved very slowly on this, as I didn’t want to mar the gun, and it took about an hour to get it removed and cleaned up.

I then drilled out the larger hole.  The 106 has a folding stock, so there are some extra rivets to contend with.  The new lever was hitting one of them, but just barely, so I knocked down a corner with a sanding wheel on the Dremel.  The folding stock, when folded, locked up on the new lever, so I had to cut a channel in the polymer to accommodate that.

The last step was fitting the new lever.  That required some filing and fitting, more filing, more fitting.  Take it slow, as a snug fit of the parts is essential for proper function.  And how much fitting you will need to do will depend on your AK.

After all of this was finished, I touched up the receiver with some high-temp spray paint.  Eventually I will have the whole gun refinished, but that’s later.

Shooting with the Ambidextrous AK Lever

This is certainly a device that requires fine tuning.  The lever itself is well designed, and very ergonomic.  The safety on my 106 is stiff to begin with, so working the lever with my thumb required a lot of force.  But after some tweaking, it works much better.  I’m taking it slowly.  That’s the key, here.  Don’t over adjust.  I can put the safety on with no effort at all.  Taking the safety off is more difficult, as the normal safety catches on the lip of the receiver, and getting over requires force.  But after shooting for a couple of hours yesterday, I see what needs to be done.  So back to the basement….

There is no better way to get to know your gun than to take it apart.  Shooting it is easy.  I’m talking about the knowledge your mechanic has of your car (or my mechanic, at least).  This is a great place for the beginner to really push his skills.  Those who might describe their skills as “intermediate” won’t be challenged at all. 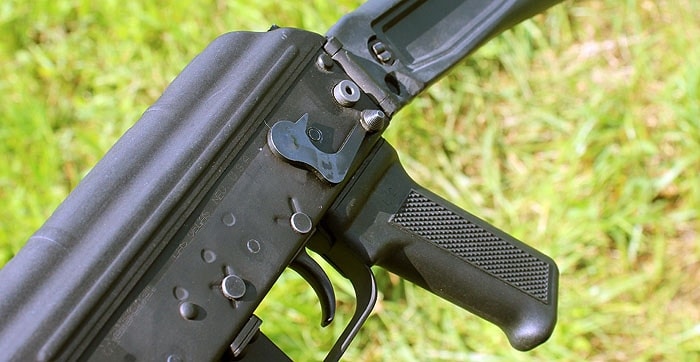 SniperHandle.com is selling the levers for $64.95.  They are very well worth it.  The lever doesn’t look like much from the outside, but they are finely engineered and well built. Check their webpage to get more details about which guns the safety will work with, and to read the details about instillation.  I didn’t know if it would work on the 106.  But it is an AK, not an AR, so I made it work.  Now I just have to make it look good again.

If nothing else, the new safety lever allows AR shooters that added benefit of familiarity.  And you never know when you will need to take a safety off without taking your hand off the grip.