American Target Firearms  (ATF), not to be confused with the other ATF, makes of a unique shooting rest they’re calling “The Device.”  In the most simple terms it is like a monopod, but for handguns.  The Device come in two grip angles, 17 degrees (the 1911 angle) and 25 degrees (the Beretta, Glock angle). 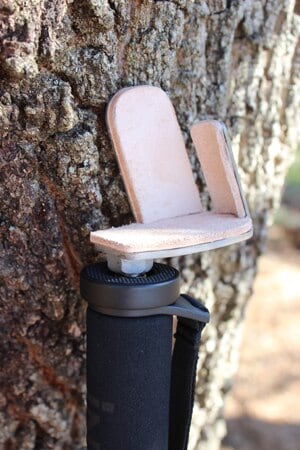 The Device is built of steel and leather, and it is a geometric oddity.  The magazine of a handgun rests on a flat base.  The back of the grip slides into a back-strap that’s welded to the base.  A smaller support is welded to one side.  All of the contact points are covered in saddle leather (with the rough side out for extra grip).

The gun seats into this device, and then your hand wraps around the gun and the device.   A nut on the bottom of the device makes attaching it to a monopod easy.  ATF’s monopod of choice is a durable aluminum Induro telescoping pole.  When combined, the two are hardly light, but they’re rugged.

Shooting with the Device

As far as reviews go, this one should should be easy.  The Device works.  Although it doesn’t feel natural at first, but the Device does stabilize the gun and after a magazine or two, I found I wasn’t as focused on the Device as I was the target (which suggests that using the Device could easily become second nature). 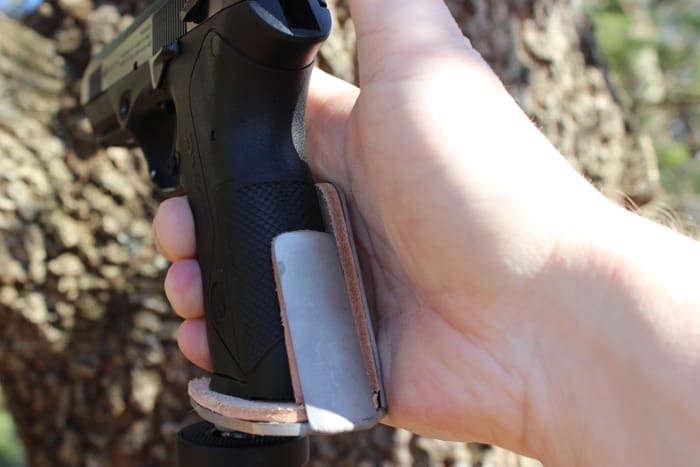 While pistols work well with the Device, rifles are a bit more complicated.  We shot the device with an Arsenal SGL-61 AK-47, and it was harder to stabilize.  Many hunters have used shooting sticks with their rifles, or monopods with simple Y ends to brace their rifles barrels.  And for a rifle, this makes more sense — even a rifle with pistol grip.  But the Device does support the weight of the AK, so there’s that to consider. 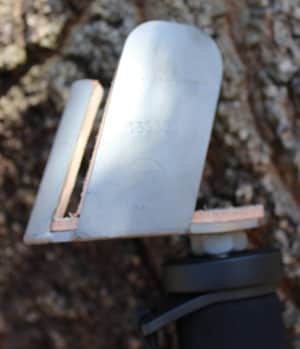 We did most of our evaluation with a Glock 30S in the device.  Even with short double stack grip on the  .45 ACP 30S, we had no problem getting a secure fit.  I had little difficulty returning to the target.  Not that I typically do, mind you.  But the time between the shot, and my assessment of accuracy was a bit faster with the Device.

Returning to target for a follow up shot happens easily and quickly because the gun doesn’t drop.  I have a habit of shooting and dipping the gun below the target to see how I did.  Then I have to reset the sight picture completely.  But with the Device, target reacquisition happens more efficiently.

Who’s going to use the Device?

While the Device has a certain appeal for target shooters, it will really resonate with handgun hunters.  Pistols fit in the Device really well.  Revolvers often have more curves.  They’ll fit in the Device, but not as well as the angular ends of some semiautomatic pistols.

Take a Glock 20, for example.  With a 6-inch barrel, the 10mm Glock is a formidable hunting handgun. And the recoil of the 10mm round is punchy.  With the right hand on the gun and the Device, and the left hand on the padded grip of the Induro monopod (instead of on top of the shooting hand), that recoil would be more easily manageable.

But the real market has to be shooters who want to shoot despite some form of physical limitation.  While the Device requires a bit of hand strength, it isn’t half of what’s required to shoot freehand.  Those with wrist pain, shoulder ailments, or arthritis might find the advantage they need to keep shooting.

The Device is unique.  The ATF web page has information about fitting various models to their appropriate Devices.  And The Device has an MSRP of $92.50, which includes shipping.  The Induro monopods start at $69.50.  They aren’t cheap, but what they may provide (increases accuracy, or the ability to stay in the game) shouldn’t be.  The Device is well crafted, well designed, and certain to keep some shooters on the firing line.