How much abuse can a 1/4-inch thick piece of steel take?  It depends entirely on the steel.  AR500 Armor has a steel core that’s coated with PAXCON, a type of Line-X bed liner.  AR500 Armor body armor is just about as tough as it gets.  If your line of work puts you in the line of fire, you need to check out AR500’s options.

The National Institute of Justice’s level III rating means the plates will withstand  rifle threats up to 7.62×51 M80 NATO ball (.308 Winchester) at velocities up to 2,780 feet per second and all pistol calibers. 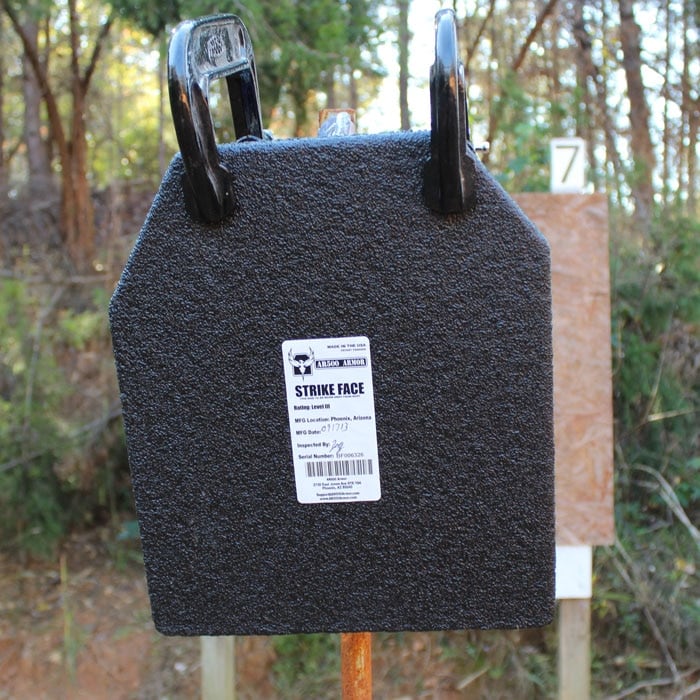 The plate, ready to take the abuse. (Photo by David Higginbotham)

The plate is roughly 10-by-12 inches and has the corners cut off at the shoulders to allow for a greater freedom of movement.  AR500 calls this their Advanced Shooters Cut (ASC).  You’ll need a plate carrier, obviously, but AR500 has options for those, too (more on that soon).

They offer a flat version of the plate and a curved version, which is more comfortable for daily wear.  The plates weigh 7 1/2 pounds (15 pounds if you’re wearing on on the front and the back) and are completely maintenance free and made in the USA.  They’re exceptionally rugged, as you might expect.  Some other types of armor may be lighter, but the weight of an AR500 plate represents its ability to withstand multiple hits, something lighter plates can’t claim.

A basic primer on hardness

Getting steel to hold an edge, or to stand up to the impact of a bullet requires a special heat treating process.  Some heating and quenching methods make steel hard, but also brittle.   A brittle plate would simply shatter. 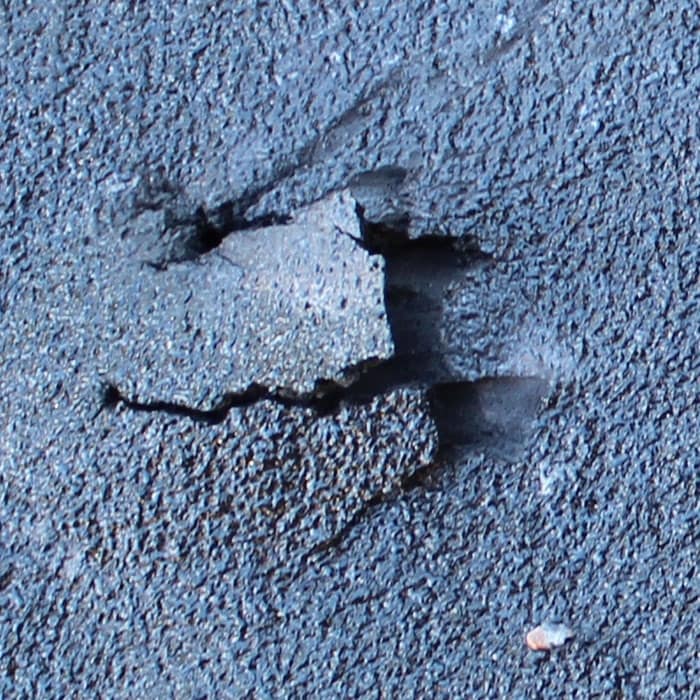 Some rounds may cut the PAXON, but not penetrate. (Photo by David Higginbotham)

Tempering the steel allows you to retain some of the hardness, but also incorporate some elasticity.  A good steel plate has to be hard enough to withstand impact, and elastic enough to bend when appropriate.

Too hard, and the risk of ricochet and plate fracture goes up.  If a plate is too elastic, the plate will stretch thin.  That stretching, oddly enough, causes friction in the steel which effects its temper (making it softer).  A thinner, softer section means that a repeat hit is more likely to penetrate.

AR500 uses a propitiatory method to create a plate that achieves a solid balance of protective properties.

There are other dangers to consider

What happens to the bullet when it hits the plate?  That chunk of lead, maybe steel, copper, etc.,  has to go somewhere.  In a perfect bulletproof world, the projectile would simply pancake and stay right where it hit.  But this is not a perfect world.  Bullets that hit steel plates are prone to ricochet.  In some cases, they break into pieces that ricochet in all kinds of unpredictable ways.  Your face, arms, and legs are in danger. 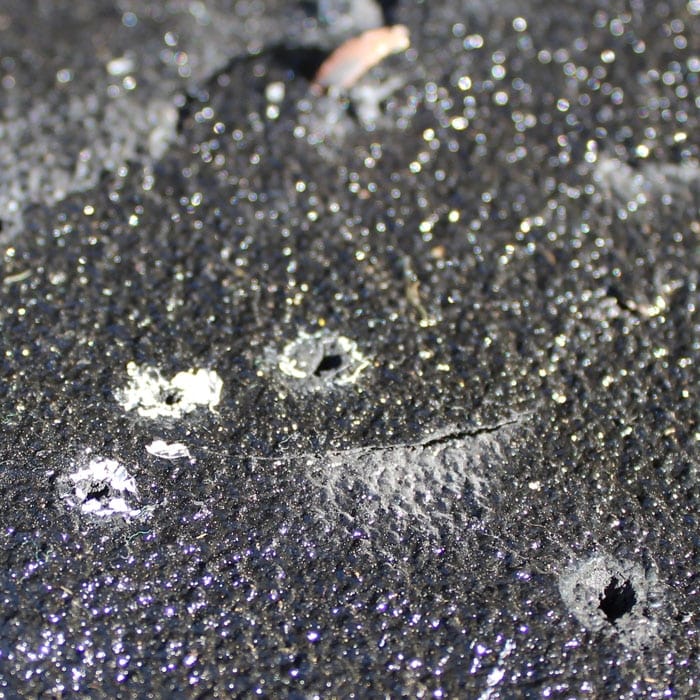 Other rounds pancake under the coating. (Photo by David Higginbotham)

The AR500 armor is more than just steel.  The PAXCON coating on the steel acts as a trap.  And it works amazingly well.  The bullet penetrates the outer layer, hits the steel, but doesn’t ricochet back through the PAXCON.  It traps the fragments in place.  This should prevent most ricochet wounds.

The bullet is one thing. There is an additional danger from spall (the fragmentation of the plate produced by the high speed impact).  Shoot a steel target with a .223 and you may notice a divot in the plate.  Even if it doesn’t penetrate the target, it may fracture the steel and create shrapnel.  The PAXCON catches that, too.

The impact itself creates a tremendous amount of force.  It varies based on the weight of the projectile, angle of impact, and speed.  The PAXCON slows down the projectile.  The plate stops the bullet (absorbing the energy), and then soft layers (like your plate carrier, clothes, etc.) cushion that blow.  But it may still hurt. 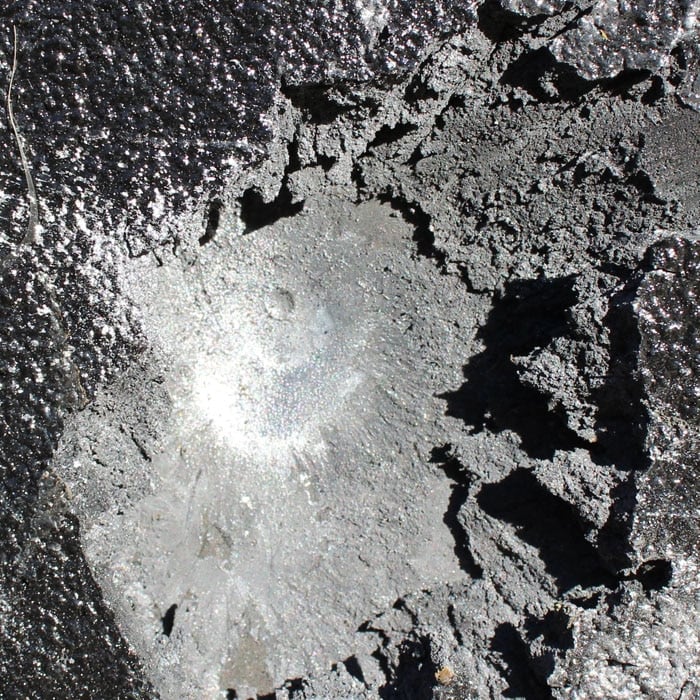 We wanted to know just how well the plates worked.  So we shot it.  The video above chronicles the test.  We fired a sequence of handgun rounds at the plate.  There was very little chance that this was going to damage the plate itself.  We knew that going in.   But it does a number on the coating, which we thought might approximate worse-case conditions of wear and tear.

Level III rated armor is going to stand up to all handgun ammunition, and it should withstand anything up to a .308 (that isn’t specifically designated as armor piercing).  There are some small, fast rounds that can defeat class III rated armor, but they are rare (and even more rare in combat).  Some light .223 rounds with extremely high velocities may punch through (may being the optimal word). 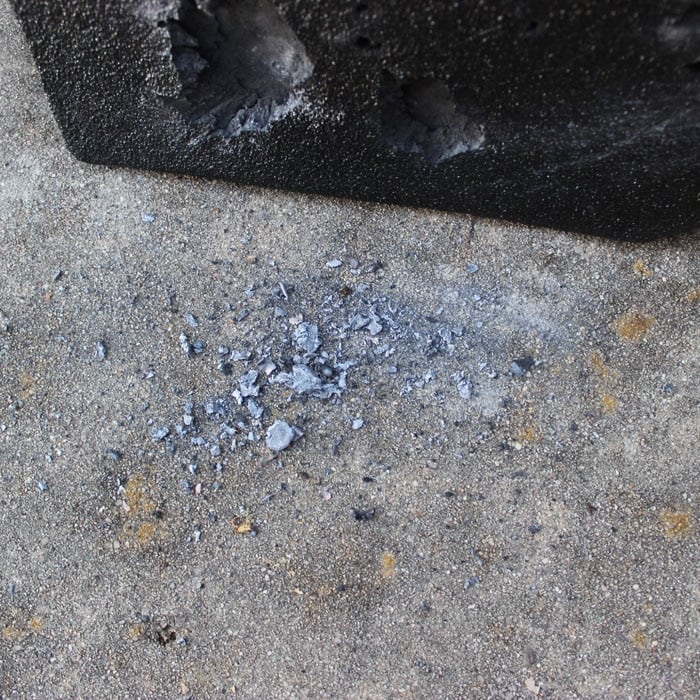 After, I shook out the lead from under the PAXCON. (Photo by David Higginbotham)

We shot this plate with .380 ACP, .38+p, .357 Magnum, 9mm (HP and FMJ), .40 S&W (HP and FMJ), and .45 ACP.  Two rounds of each.  The plate held up splendidly.  The PAXCON didn’t look all that bad either.  Some of the rounds expanded between the PAXCON and the plate, effectively cutting it loose, but it retained all of its protective qualities.  No ricochets.  No spall.  And the plate, after being shot 12 times, showed no signs of bending.  None.  It remained flat.

After, we shot standard FMJ 7.62×39 from an SKS.  No damage to the plate.  Parts of the PAXCON sheared off, and there was more ricochet.  I was hit by a piece of the copper jacket from 25 yards.  If they could engineer that into the armor, where the shooter would get hit with a ricochet, that would really be impressive. 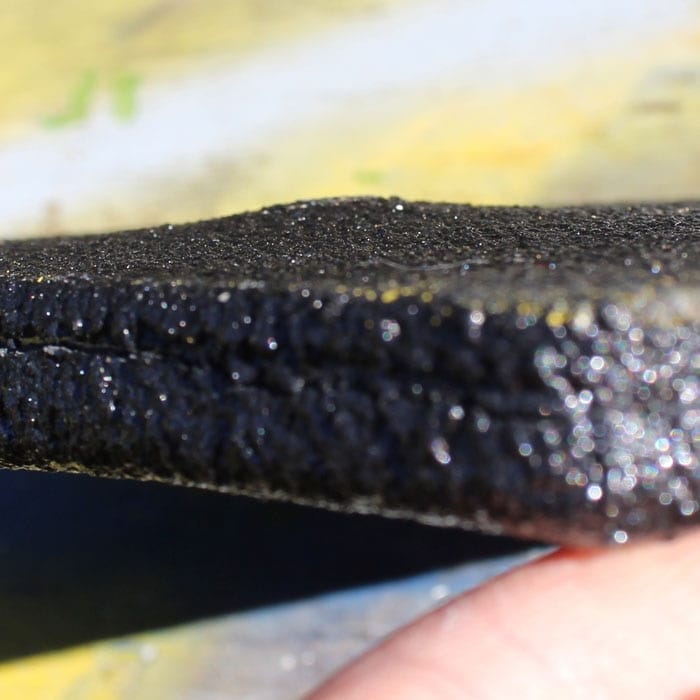 This is all we could get it to bend. (Photo by David Higginbotham)

The deflection on the back of the plate was achieved by shooting in the same spot multiple times.  One of the handgun rounds went in first and we followed it up with the 7.62×51.  With all of the PAXCON gone, the round had nothing to slow it at all.  It banged into the plate and made a noticeable dent, but you still have to look close to see it.  More importantly, after multiple hits in the same location, the plate stood up to the torture.

After we’d photographed the results, I ran a bit of every .223 on the plate, trying to see if I could get a round to penetrate.  There was nothing.  I’m sure it can be done, but I couldn’t do it.

If I were being shot at, I’d trust AR500.  I can’t say that for all of the armor I’ve seen.  This plate retails for $65.  For what it does, that’s nothing.  Considering the testing and resources that went into the development of these plates, it is ridiculously low.   When you take into account what this company is doing, offering protection for those who serve, saving people’s lives, and putting their reputations behind that effort, I think it almost unbelievable.  Yet they do.  They offer protection anyone can afford.