The basic premise behind Battle Blades isn’t knew.  Folks have been attaching knives to guns (and the other way around) for as long as both have existed.  No one bats an eye at a bayonet on a rifle.  But the idea does seem a bit old-fashioned.  Yet the need for a handy knife still exists.  Enter Battle Blades.

Battle Blades take the concept of the bayonet as extension of the primary weapon and scoot the blade back on the rifle.  The sheath has a separate clamp that allows the knife to be bolted onto picatinny rail.  While this won’t allow you to poke or jab like you could with a bayonet, it does allow you to have a knife at the ready, just in case.

In case of what?  It is obviously a last ditch option for defense.  But there’s more than that.  The knife, which is made in collaboration with TOPS Knives, is an ideal size for a general utility blade.  The blade is just over three inches long, and decently thick.  At just over seven inches in length, the Wolf Hawk fits nicely in the hand.

The knife is made of 1095 carbon steel and coated in a very coarse finish that TOPS calls “Black Traction.”  While I don’t yet have any real input on how the finish will hold up to prolonged abuse, it feels very durable.  And the carbon blade, which is easy sharpened, should be very well protected. 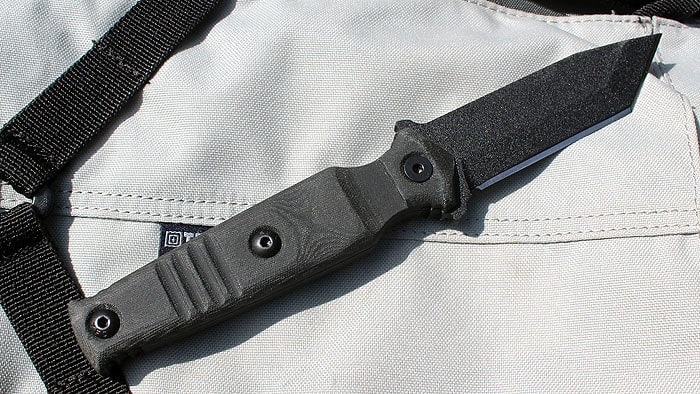 For those of you interested in the numbers, the blade is hardened to between 56 and 58 on the Rockwell scale.  That’s hard enough to hold an edge, and not hard enough to be especially brittle.

The knife is fantastic.  But the sheath is what makes this system sing.  It mounts to a rail.  We’ve covered that.  But it does so very securely.  The clam shell clamp grabs both the rail and the sheath and holds both without putting any pressure on the sheath that would make drawing the knife difficult.  And it is black on one side and camo on the other, making it even more versatile. 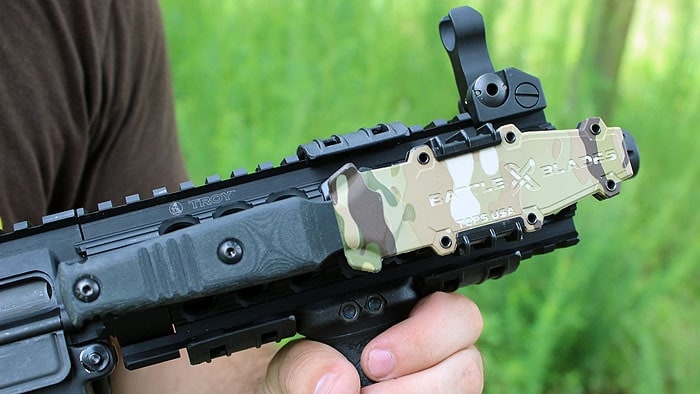 When the knife is seated fully in the sheath, your thumb fits neatly between the edges of the sheath’s opening.  Forward pressure spreads the sheath open, releasing its hold on the knife, which can then be drawn.  This sounds more complex than it is.  After a few minutes of practice, it draws easily. 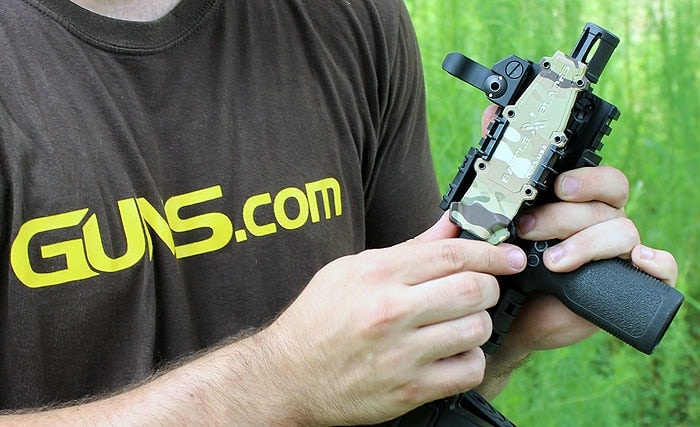 As a safety note, I would suggest knowing which side of the blade is sharp.  The draw may involve you bringing your thumb across the back of the blade, if only momentarily.  If the knife were to be upside down, your thumb could hit the cutting edge.

Shooting with the Battle Blade on the gun

We wanted to really push the limits of the sheath, so we put the knife on a select fire Colt SBR and ran it at full auto.  If anything were going to knock the knife free of the sheath (and it is theoretically possible), it would be the hard and fast recoil of automatic fire from a short barrel. 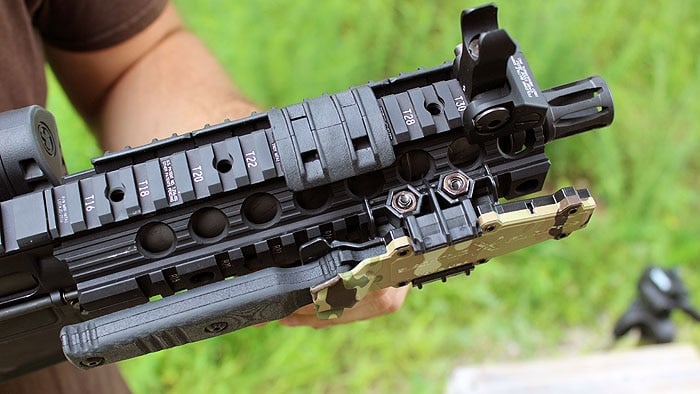 We didn’t have any problems whatsoever.  The knife stayed in place fine.  If it were to loosen, the sheath could be tightened up with a small rubber band around the opening to increase its hold.  But we didn’t have any loosening on the Colt, or on a carbine length AR either.

When I first heard of the Battle Blades concept, I found it a bit curious.  I wasn’t sure why I would rather have my knife attached to my rifle than on my belt.  But I think that idea was limited.  The Wolf Hawk isn’t designed to replace a fighting knife, a bayonet, or a utility fixed blade.  It is designed to compliment your preparedness.  To add to those things. 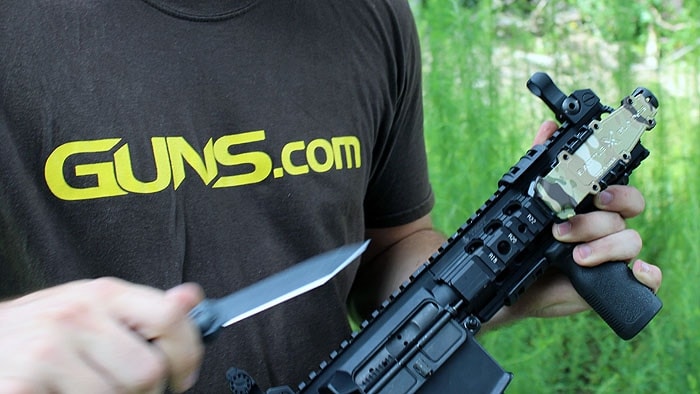 If you were to get separated from your gear, or lose your primary knife, there it is.  On your rifle.  And it isn’t some piece of crap knife that you wouldn’t trust to open letters.  It’s a TOPS.