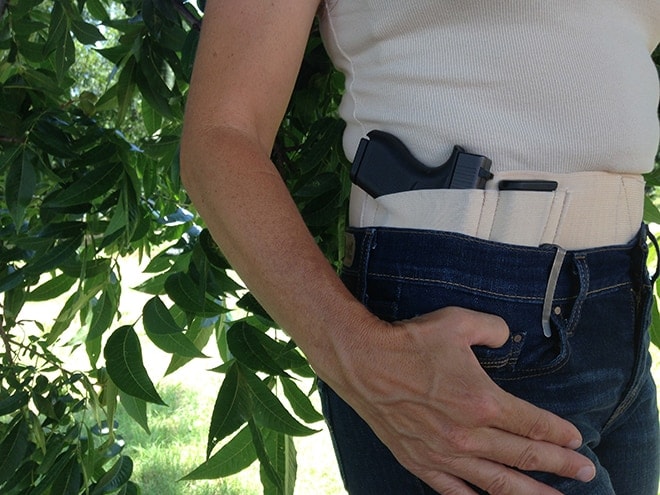 There aren’t any other pieces of concealment gear that I can say I tried, then put away because I disliked, and then tried again later, only to find I really liked it (for certain applications).  Meet The Well-Armed Woman belly band holster—a concealed carry holster that as far as I can tell (and despite the name) has something to offer both men and women.

The model I have is five inches wide but there are a variety of size options to fit practically any body type. It also comes in a four-inch model recommended for short-waisted people—which I am—but the width isn’t among the things that I’ve found disagreeable with this rig. According to the vendor’s website, the updated version of this holster has retention straps.  Mine doesn’t, but there are sew-on straps offered for sale.  The color options are natural and black. 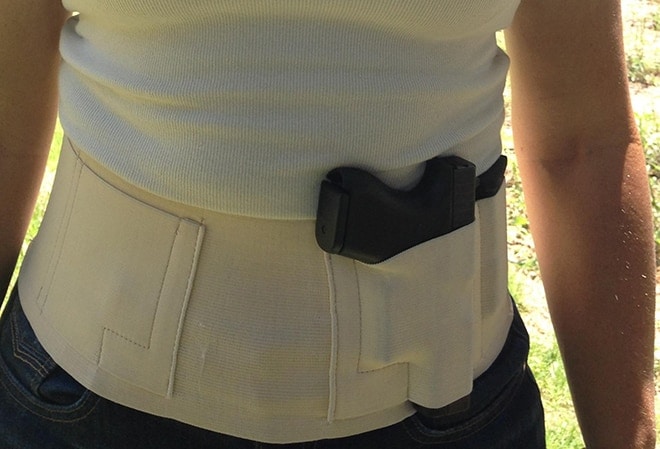 Additionally, this holster has an array of options for stashing things other than a firearm.  I found the mag pouches next to the two gun pouches to be particularly useful; accessing a spare mag, even on the “wrong” (strong) side, is easy with this holster.  There’s also a fifth compartment, six inches across and four inches high, with a hook and loop closure (in conversation I would say “Velcro” like anyone else, but that’s a brand name so I’ll refrain here).  This pocket is suitable for carrying money, ID, credit card, and such, but retrieving those items without exposing the gun could be a challenge.

I’ve carried two subcompact guns, with extra mags, in this holster. The North American Arms .32 rode well in it, but the magazine would work its way down into the open-bottom pouch and threaten to fall out… definitely an unsettling feeling.  It’s one of the two reasons I quit wearing this holster on the first trial.  The other firearm I’ve carried is a Glock 42, again with extra mags.  It’s proven to be much more secure and stays put in both the open holster and mag slots. The holster would accommodate two small firearms, each with extra mags, but my state’s concealment statute limits me to one concealed gun at a time, so I haven’t tried to pack two in this rig. 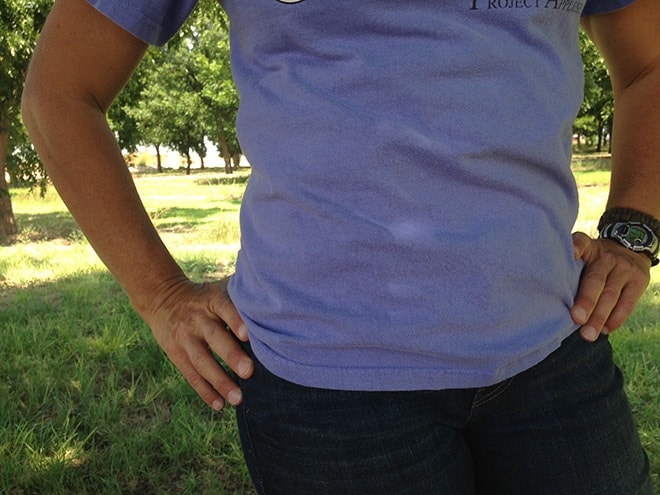 Retention straps haven’t been ruled out as an add-on. Carrying in this band demands occasional adjustment of the gun, which sometimes threatens to ride up and out… so far, that’s not happened in an all-at-once fashion, or I’d have already thrown this holster in the trash.  I also dislike hook and loop retention straps: I don’t like the thought of drawing fire in a lethal situation after the killer is tipped off to my presence by an audible riiiiiippp.

When I wear the holster high/center, as shown on the vendor’s website, it prints terribly.  Keeping it high but rotating it so the grip is just off of the strong-side breast hides it better.  This is also the only position in which I’ve been able to wear this holster and run, up to four miles, without the gun moving around.  Comfortable? Not really… but not nearly as bad as duty gear worn by police or military personnel.  And it makes it the ONLY rig I’ve found so far that I can run with and remain concealed, albeit under a looser-fitting shirt. 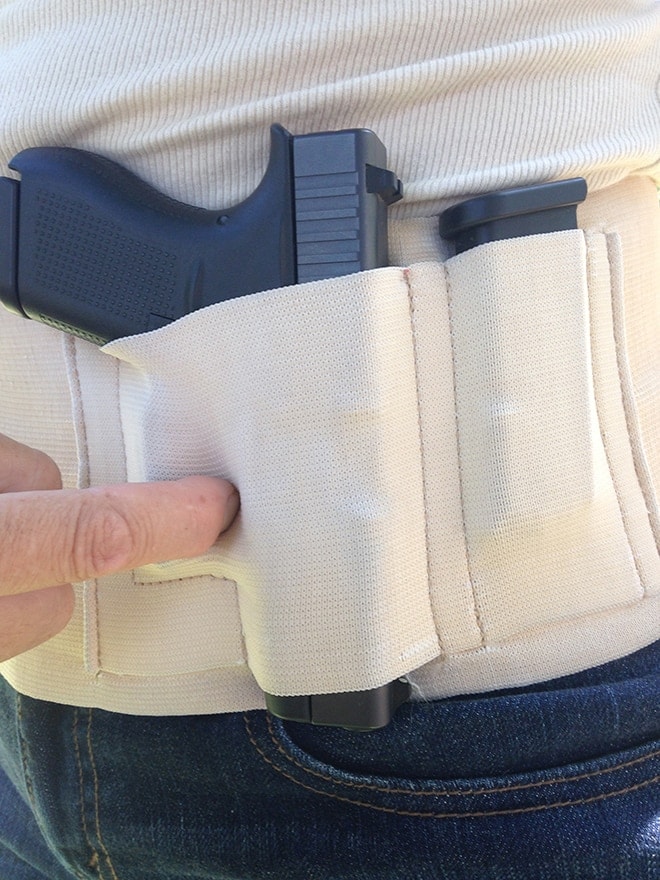 Though retaining my Glock 42 well, the soft trigger guard is not impenetrable. (Photo: Eve Flanigan)

This method of wear—high on the ribcage—also works for some dressy outfits, but is uncomfortable to the point of disrupting digestion after about three hours if I have to remain seated most of the time. And that would be the second reason I gave up on this holster when I first tested it.

Recently, I’ve started wearing the belly band in a strong-side inside waistband position, much lower than shown on the WAW website. It’s really quite comfortable there, and the draw is easy. It’s also safer, but still vulnerable in a way I will discuss below.

If you’re one of those folks who sweats profusely when the temp goes above 80 degrees, or for those who are outdoors in the summer heat or exercising to the point of profuse sweating, be aware your gun will be wet and salty when you take the rig off and you’ll need to give it a little wipe-down and maybe oil to prevent rust. 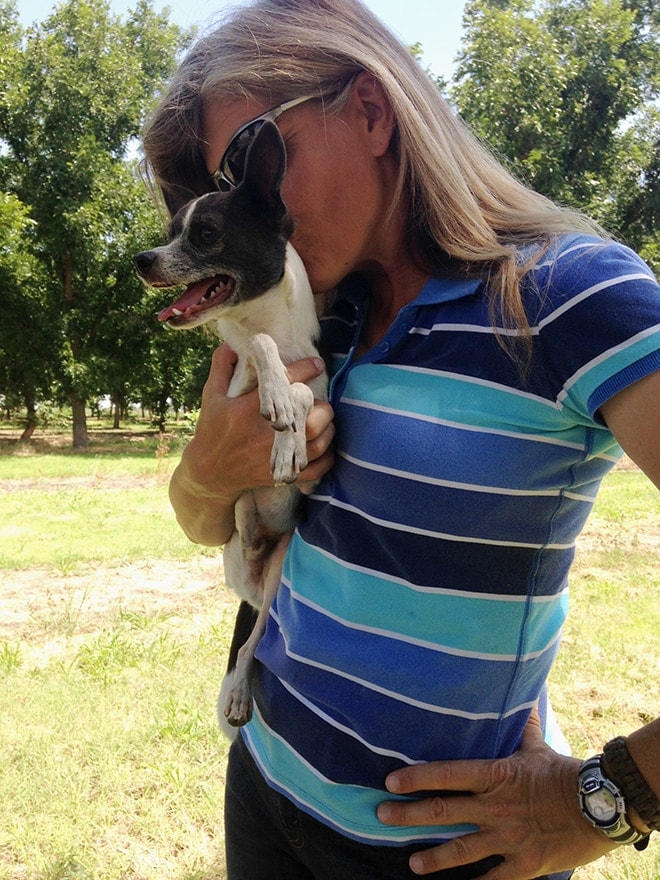 Dual-wielding a dog and gun! Gun is AIWB, well away from Radar. (Photo: Eve Flanigan)

Safety is a potential concern with this holster, for anyone whose daily activities may involve carrying or colliding with objects (maybe dog claws, baby toes, tree branches, etc.) that could, in the odd circumstance, penetrate the pouch covering the trigger guard.  This isn’t a likely scenario, but a rigid, impenetrable cover over the trigger is always preferable for safety.  For me, this means the holster must be below waistband level inside jeans, which offer another layer of trigger guard protection if I’m carrying my dog on the same side as the gun—otherwise, the gun and dog stay on opposite sides of my torso. Of course, the consumer must consider his/her lifestyle and mode of dress when considering this holster, which many will find quite serviceable.

This holster retails for $41.00 plus shipping.  After much trial and error, I feel it’s delivering value in terms of being able to draw quickly and smoothly, pack extra magazines, and exercise.  I’ll be using it more in the future with the annoyingly belt-less dress pants now in vogue for women.