Blue Force Gear makes a variety of tactical gear.  Part of what makes the company unique is a growing line-up of minimalist options that take the concept of lightweight to the extreme.

This chest rig below is a perfect example.  The base is a Rack Minus.  The pouches are from Blue Force’s Ten Speed line.  The combination is a rig that weighs very little, and one that disappears easily beneath a coat. 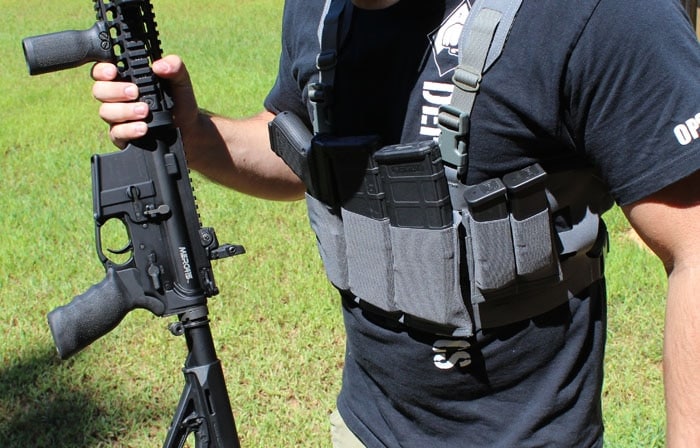 There are very few chest rigs or plate carriers that are more skeletal than the Rack Minus.  It is thin.  The shoulder straps offer a bare minimum of padding, but it is enough to carry the weight of loaded magazines with ease.  Where the pouches connect, sections of the material have been cut away in neat squares.  The result is an empty rig that feels like a net. 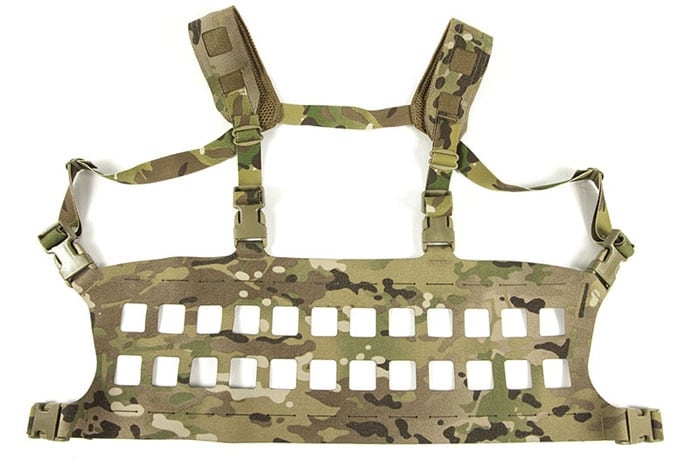 The Rack Minus is a minimalist chest rig.

The stability of the platform comes from the straps that tighten everything down, and from the pouches that thread through the fabric.  Apart from the light weight, I’ve been very impressed with how Blue Force has cut the Rack Minus.  The large square cuts all have rounded corners.  On the outside chance that something would catch in one of these squares, it won’t tear out at the corner.  This goes for the pouch slits, too.  They’ve cut simple slits, but punched out small round holes at the end of each.  It is small, I know, but an attention to detail that defines Blue Force’s gear.

Did I mention that it is thin?

And the Rack Minus is thin — that is a hard detail to ignore — and it weighs next to nothing.  The Rack is made from a proprietary laminate material Blue Force call ULTRAcomp.  It feels almost like a cross between canvas and vinyl, and is reported to be four times as abrasion resistant as 1,000 denier Cordura.

I can’t confirm the abrasive resistance of the material, but it feels solid enough.  With the cut-outs so evenly spaced, and with so much material removed, I expected there to be more play, more give, in the rig.  But it holds its shape very well and isn’t prone to stretching at all. 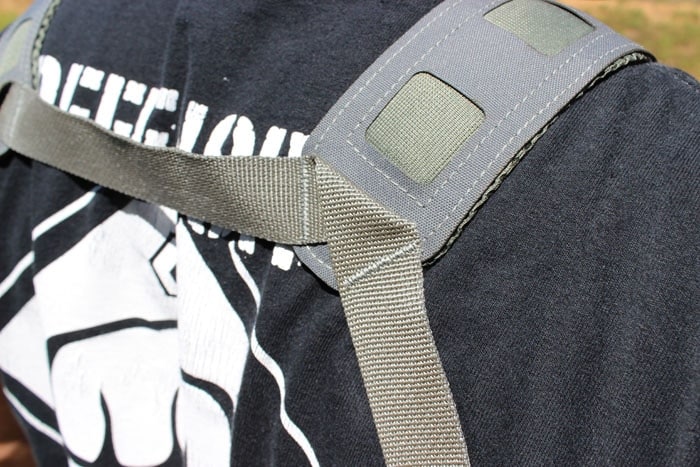 The Rack Minus works alone, as we’re showing here, or it can be paired on top of a plate carrier.  It retails for right at $100 and comes in brown, grey or multi-cam.

The Rack Minus won’t do much without some add-ons.  For those interested in minimalism, Blue Force’s Ten Speed gear is a must.  The Triple M4 Pouch is a mix of ULTRAcomp, and “military grade elastic.”  The result is a balance between tension and release that makes carrying a magazine secure and pulling a magazine reliably easy.  There’s no need for bungee straps, or pouch covers, as the elastic will hold.  But the hold isn’t so tight that you’ll take the chest rig with you when you pull on a mag. 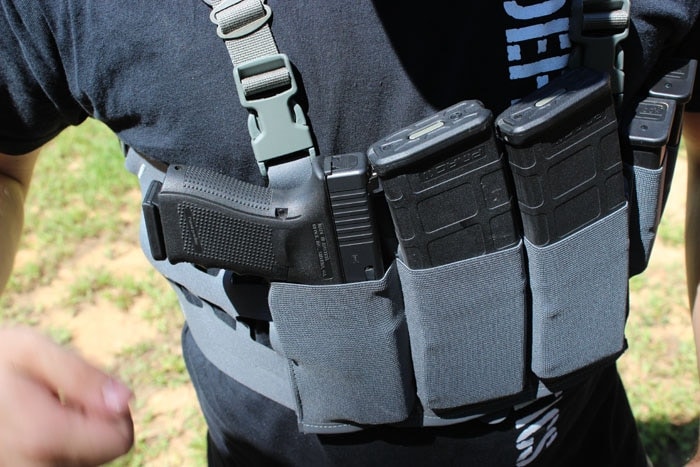 The elastic is strong enough to hold aluminum or steel magazines, polymer magazines, and can even be used improvisationally.  In the photo above, Jacob has tucked his Glock 19 into the Ten Speed elastic and it holds exceptionally well.  The Triple M4 sells for $33.

Blue Force makes their gear in the U.S., and back their workmanship with a lifetime warranty. 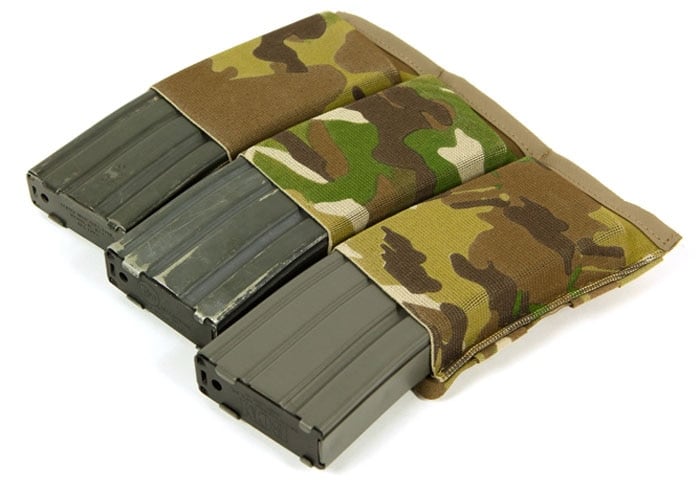 The Blue Force Ten Speed gear comes in a variety of colors and patterns.

Blue Force makes their Ten Speed line in a variety of configurations.  The Rack Minus has 12 rows of MOLLE attachment points, so you can combine rifle mag holders and pistol mag holders (like the Double Pistol Mag Pouch in the photo below).  Because of the flexible nature of the elastic (which is far more forgiving than most nylon), you can carry a wide variety of extras.  The pistol mag pouches are ideal for many flashlights. 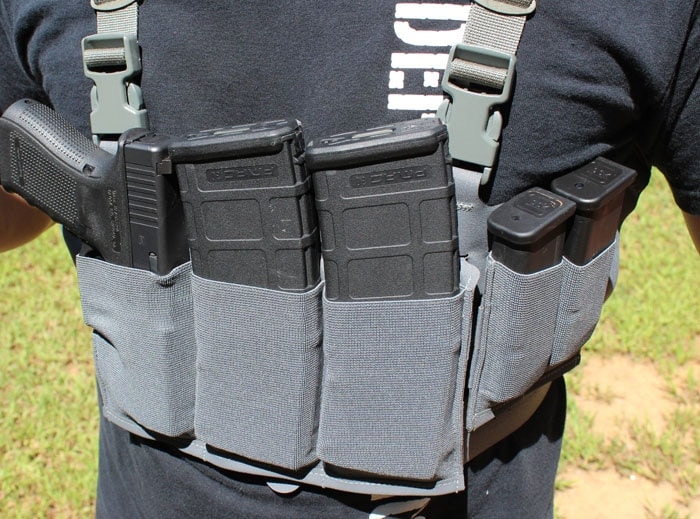 So light, but so hard

I had no idea what to expect with Blue Force’s Ten Speed set up.  I’m not a minimalist.  I prefer for my ARs and my pistols to be made of steel.  I know I’m old fashioned in that way, but that’s the way it is.  So I was skeptical about the Ten Speed philosophy.  How can something so light stand up to hard use?

I still can’t answer the “how” part of the question, but I know it does.  I’ve scoured the Internet for anything even closely resembling complaints about material or design failures and I’ve come up empty.  It is one thing for me to wear this in practice, but another for it to stand up to repeated tours and daily use.  But it does.

If you’re looking for a new way to carry magazines, I’d suggest taking a look at Blue Force.