The best part of being a gun and gear tester is also the most humbling part—trying out gear that only brilliant minds could conceive and build.  Case in point: the Bump Fire Systems AR15 stock. If you haven’t yet seen one of the many videos of this product, it’s a polymer buttstock that allows a regular AR15 (with a buffer tube) to fire in full-auto-like mode.

This device is amazingly simple in design, lightweight, and it took only about 20 minutes to install.  It arrived in a plastic bag with a paperboard closure. Printed on the back in impossibly small words and pictures were installation instructions.  The only other item with it was a copy of the company’s letter from the BATFE confirming that the Bump Fire doesn’t turn rifles into machine guns, legally speaking.

Not until after the range test did I check out the Bump Fire Systems website.  Lo and behold, there are detailed instructions with photos that would’ve been handy during installation, along with operating instructions. (Kinda wish the card on the package had informed me of that).

Thank goodness for YouTube, which yielded a plethora of installation videos, many with close-up views.  To install, the original screw holding the grip into the lower must be removed and secured through the Bump Fire grip.  Also one must be careful not to lose the safety selector detent and its tiny detent spring, which was mentioned often in these videos.  In short, the AR’s grip and buttstock are removed, and the 2-piece Bump Fire—a U-shaped block that fits behind the trigger guard and the buttstock—both slide into place.

Once mounted, the safety lever and bolt catch both require a little tactile re-locating, as the Bump Fire slightly interferes with being able to reach these levers.  It’s not a major problem, but it takes a little getting used to. The grip is fuller and slightly longer front-to-back than a standard mil-spec grip. For shooters with larger hands, this may not even be noticeable.

As shown in the picture, the Bump Fire has a rotating, spring-loaded knob set in the buttstock. This part, when turned perpendicular, prevents the device from moving forward and back—which is required for its full-auto-like effect when the insert is set in line with the stock. It’s an easy adjustment. 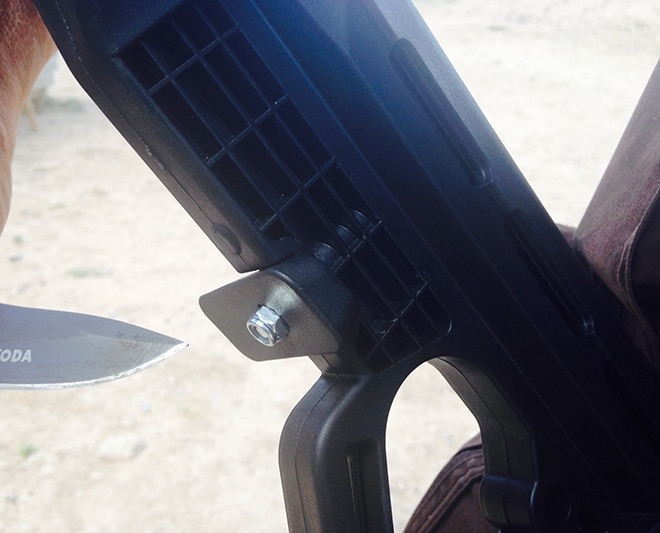 According to the online sources, the device is designed to be used by doing something unorthodox—pushing the gun forward, using “intermediate pressure” with the front/support hand while firing.  On my first mag, I shouldered the AR, switched the safety off, pushed the forend forward, and pressed the trigger. Bang.  Just one bang. As shown on the video, this process was repeated several times before I put the safety on and turned the gun over, not really being sure what I was looking for to remedy the fact that it wasn’t going bangbangbangbangbang.  An associate then attempted firing right-handed.  This yielded a couple of two-round bursts, interspersed with single shots.

Puzzled, I phoned Bump Fire Systems.  A real person who knew the product answered the phone.  I explained the trouble, and asked what on earth “intermediate pressure” means… is that the weight of a milk carton, or a can of soup or something else? The gentleman replied that the pressure varies depending on the weight required to fire the shot, e.g., a milspec trigger like mine would require more pressure than a match trigger.  He plainly explained the operating procedure and when the short call ended, I felt I finally had a clue about how to operate this thing. 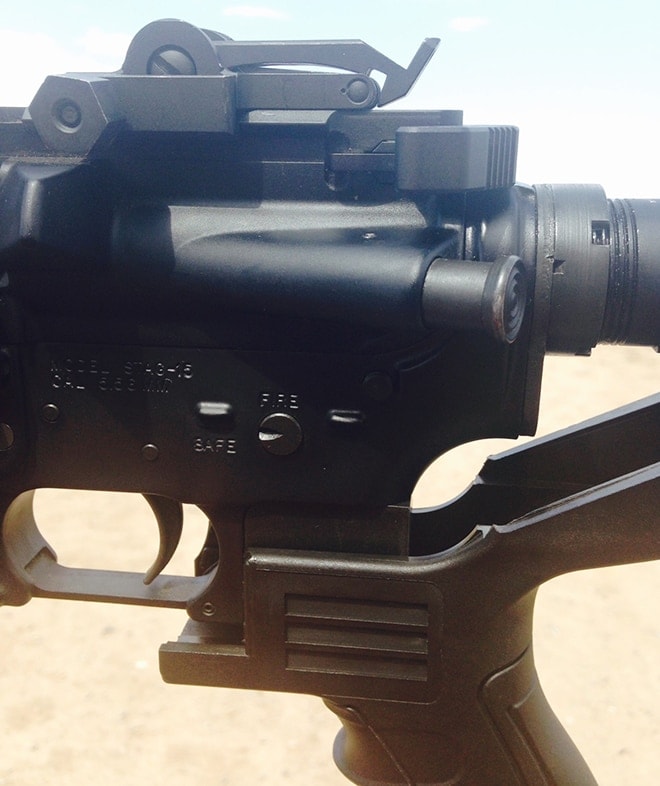 The original notes for this article included: “not impossible for right-hand operation, but there’s a piece of polymer partially covering the trigger guard, making it uncomfortable to shoot right-handed.” Little did I know that little shroud is actually critical to the operation of this device when used left-handed.

Correct operation of the left-handed version (and this is simply converse for right-hand models) entails bridging the trigger finger over the trigger, resting its pad on the flange just to the right of the trigger guard.  With the finger in that position and the gun shouldered, the operator pushes the forend toward the target. This results in the trigger making contact with the middle of the finger….and WHAMMO!  Full-auto like fire.

It was impossible to keep from laughing like a loon after running one 30-round magazine in bump fire mode.  It’s just so flippin’ FUN.  The action stops as soon as the finger is released, or as soon as the forend is pulled back toward the operator.  You can adjust, somewhat, the rate of fire by experimenting with pressure on the forend.  It’s fun to experiment with short bursts as well as 10-30 round hammering.

For a minute, it was hard to remember I was doing a serious product review.  I grabbed another full magazine and set a target up, determined to see just how legendarily inaccurate bump fire is.

The recoil is not much different from full auto, which I have run a bit in .223.  A line from American Sniper came to mind that went something like full auto is good for keeping heads down; not so great for a specific target.  This time, I told myself, I’d keep that little red dot on the center mass line.  Ha. Very funny.  That lasted for exactly one round.  Trying to keep an eye on the red dot while running bump fire is like trying to keep your eyes open during a sneeze.  You can fight it, but you’re gonna lose, at least for a while. 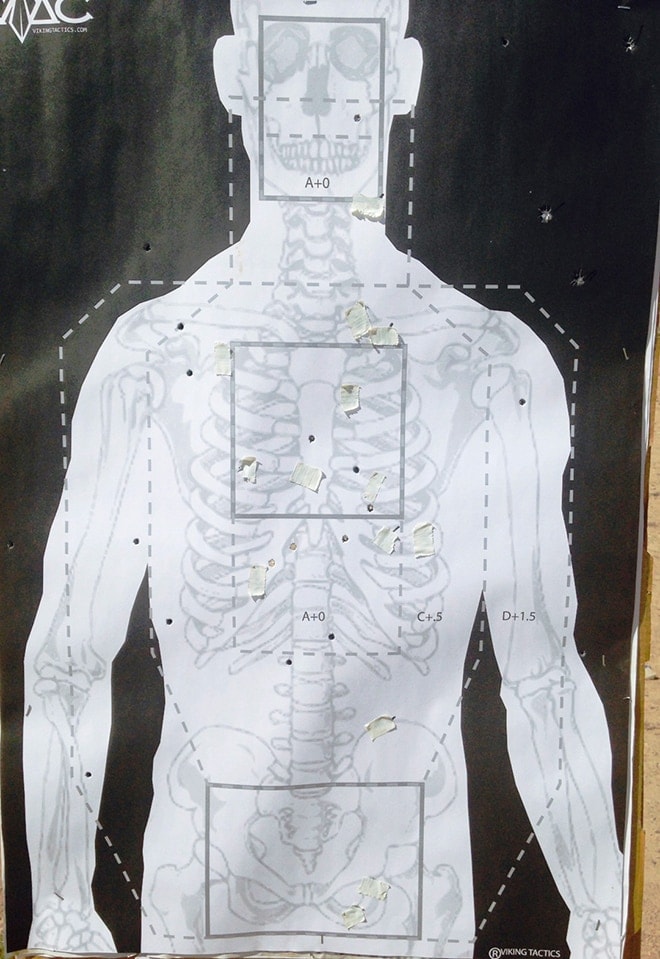 Target with 13 out of 30 hits. Though not accurate, it can keep an enemies head down. (Photo: Team HB)

The target had only about 13 of 30 rounds on the body, including on the arm. The largest group of stray rounds were high and left.  Some were off the paper, which was only 15 yards away. My training partner, a right-hander, shot yet another magazine full—this device can be operated with the “wrong” hand, though it’s a bit awkward. That shot pattern was about the same—14 rounds on target, but with most strays that were still on paper being high right.

Bump fire is dependent on the recoil of the gun within the device, which slides forward and back about an inch and a half when it’s in full-auto-like mode.  When the finger is in place as directed, trigger reset happens faster than humanly possible.  I’ll say it again—it’s a brilliant design.

Though bump firing is comparable to other .223 full auto, the pushing-away of the forend makes for less stability in stance.  I’m not a waif, and 20 rounds of steady fire pushed me backward an inch or so. I would not hand an AR set up with a bump fire stock to a weak-bodied shooter or one unwilling or unable to assume an aggressive stance to prevent loss of control. The potential for catastrophe exists in such a shooter’s hands.  Handlers/owners should use good judgment when sharing this device.

It’s almost certain that regular bump firing would wear out an action and barrel a bit before their time.  The heat generated from our 275-round experiment was impressive.  The outside of the barrel was so hot even ten minutes after firing, I feared it would melt my nylon rifle case.  It took approximately 30 minutes to cool enough to bag up.  It was a hot day, near 100F, so that probably didn’t help.

The Bump Fire stock makes for one heck of a fun party trick.  Of course, the ammunition burn rate and expense can quickly become substantial.  Discussing the applications this device might have with various client groups, we concluded that, for folks learning rifle marksmanship, pushing-away with the support hand isn’t conducive to developing good fundamentals.  It’d be a fun, if pricey (due to the ammo burn rate), thing to have as an entertainment break in a class of students who have good safety skills, and something to consider for fun/competitive group sessions, assuming that any helpless-acting/weak types as well as people with muzzle-and trigger finger-control problems are first weeded out.  Maybe that sounds rude, but safety comes first.

The Bump Fire Systems stock is available in black, flat dark earth, and olive drab.  The company also sells an AK version of the device, which is surely a little easier on the wallet, ammo-wise.  The devices are all $99 plus $6 shipping.  A 30-day return policy is offered, with $6 shipping deducted from the refund. The stocks are American-made, and the company’s customer service proved to be excellent. Seems to me this makes the perfect gift for that gun gadget lover who has everything.